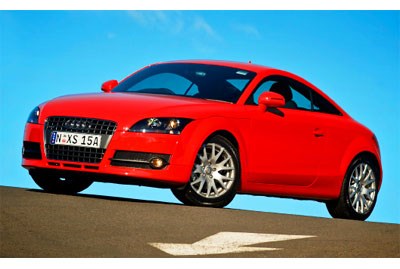 The diesel sports car has landed.

Strange but true: some people are driven into a tizzy by the idea of a diesel sports car. Never the twain shall meet, they rant. Sorry guys, but the sports-diesel union is a done deal.

Any question of the new Audi TT 2.0 TDI quattro's virility is fully answered by its looking like, sounding like and driving like the sports car it most certainly is. The simple truth is that the TT 2.0 TDI easily outruns any lingering diesel doubts, and puts your sports-driver oil on the boil.

Audi credits the TT 2.0 TDI with a 226km/h top speed and a 0-100km/h sprint of 7.5 seconds. Can't yet vouch for the Vmax, but bum's-rush judgement of the TDI's thrust through the gears suggests mid-sevens to 100 kays is entirely plausible.

At the quoted accelerative level, the TDI is only 0.3sec slower to the tonne than its also-new petrol sibling, the front-drive manual 1.8-litre TFSI. This entry-point TT makes less power and torque (118kW and 250Nm), but also weighs 130kg less than the 1370kg TDI.

While the diesel engine weighs a bit more than the petrol donk, the overall difference is due mainly to the torque-rich TDI's inclusion of quattro AWD.

Not surprisingly, the TDI scores decisively for fuel use and CO2 emissions, officially rating 5.3L/100km and 139g/km to the 1.8-litre TFSI's 6.7L/100km and 158g/km. Thus the TT TDI is Audi's second most fuel efficient model, bettered by only the A3 TDI e.

Given a foot-full, the engine sounds authoritatively meaty. Performance comes on strong from just over 1500rpm, swells forcefully until the tacho needle blurs by the 4500rpm redline and continues boldly until play ends at five grand.

Ambling at the open-road speed limit, the diesel TT answers your call with enthusiasm even in sixth gear, despite that ratio having longer legs than Tyra Banks.

Ah yes, whether doubters are ready or not, in the Audi TT the sports diesel has emphatically arrived, and the sports car world is the better for it.