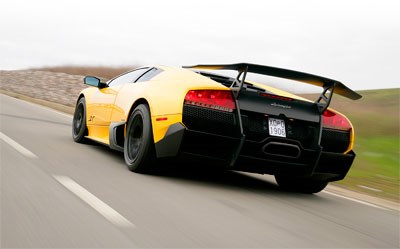 Under normal circumstances, pushing a Lamborghini Murciélago to its top speed would be enough excitement for a day. Twelve cylinders wailing away behind your head as you flatten the right pedal is bound to get anyone's adrenaline pumping. However, this wasn't a normal day, nor were they normal circumstances.

For one thing, it was night. The sun had recently set, but the bucolic landscape surrounding the Nardo Technical Centre was already as black as the Alcantara-lined interior in which we were sitting, awaiting our turn on the track. And what a track it is: a fiveu-lane-wide, 12.5-kilometre ring that surrounds the giant test facility in southern Italy. The perfect proving ground for driving the latest, lightest, greatest, most-righteous Murciélago — the LP670-4 SV — to the upper reaches of sixth gear and its lofty top speed close to 340km/h.

Its elevated rear wing is a dead giveaway that the LP670-4 SV is not your garden-variety Murciélago. The alphanumeric nomenclature stands for its longitudinally-aligned, posterior-mounted, 670PS V12 and four-wheel drive system. But it's the SV suffix — for SuperVeloce, or 'Super Fast' — that sets this macchina apart. The revised valve timing, intake and exhaust systems for the SV's 6.5-litre V12 bring another 22kW compared with the plebeian LP640, for a soothing 493kW at 8000rpm.

The SV also sheds 100 kilos, with mostly carbonfibre alterations to its chassis, interior, and engine/drivetrain. Add in quicker electronic gearchanges, and, Lamborghini claims, the SV will accelerate to 100km/h in 3.2 seconds en route to a 342km/h top speed with the optional small spoiler, or 337km/h with the gigantic Aeropack wing.

Serious drivers will opt for the Aeropack. On Nardo's 16-turn, 6.2km handling track, the big fixed wing generated enough downforce to keep the rear end firmly planted, compared to the base Murciélago, which sometimes shakes its booty around apexes.

Running clockwise in the left lane round the big Nardo ring — it's bumpy around the three-to-four-km markers — the car bobs gently on its dampers, like a speedboat clipping the waves. By the time you pass the five-kay marker, there's nothing left to do but sit back, relax, and watch as the broken white lines just off the starboard bow appear to connect.

Driving the gentle arc is point-and-shoot simple. "We tuned the steering for high-speed sensitivity," says Mauricio Reggiano, head of Lamborghini R&D. The on-centre feel is precise and responsive at what would be lift-off velocity for most aircraft. I keep the throttle pinned to the floor, and soon nudge the speedo near its 342km/h terminal velocity, at which point my passenger — a Lamborghini Driving Academy instructor — raises and drops his left hand, gently reminding me to return to the posted 240km/h limit.

Not that I can say I blame him. The passenger's seat always feels faster. 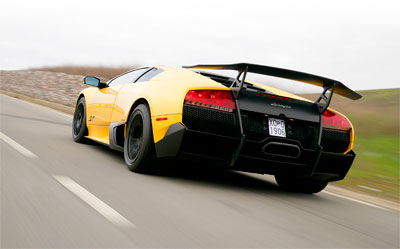 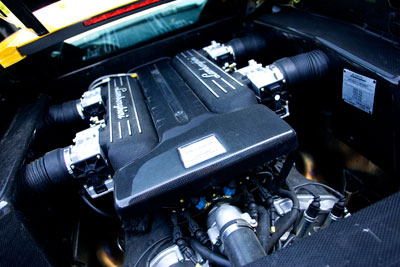 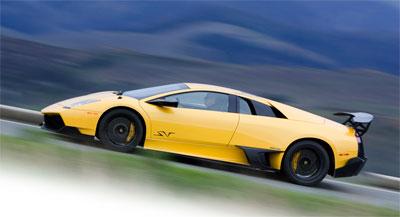