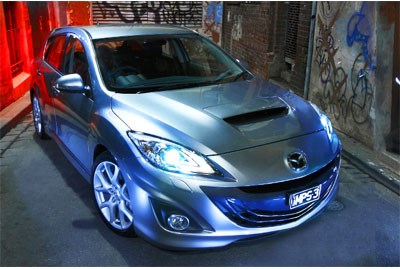 The first 3 MPS, launched here in 2006, was a bit like most politicians: conservatively-dressed, offering candy (in Mazda's case, searing turbo grunt), then literally ripping it from your hands when pressured to make good on those promises. Over 1500 people voted for it anyway, but many were swayed by more democratic candidates.

For its second tilt at the polls, Mazda has done much to address the 3 MPS's two biggest criticisms: torque steer and design conservatism.

In the previous generation, a flattened right foot resulted in a sharp crack on white knuckles; the torque steer palpably reinforcing the MPS's segment-leading front-drive power. The throttle needed judicious moderation to harness the engine's 190kW and 380Nm. For this new wild child, sanity prevailed and Mazda hasn't increased power or torque, but rather played with the delivery and introduced some trick tech, and the resulting balance between diff, drive and grip is much sweeter.

The local launch was held at the Sutton Road Driver Training Centre near Canberra; its old, undulating circuit built to mimic the worst Aussie roads, and used by Mazda to shake down its successful 3 MPS tarmac rally cars.

And this punishing track served to highlight a chassis built to blitz bends and scorch straights.

Nail the throttle in a second-gear bend, and the new car's revised diff and shrewdly-calibrated stability control work in concert to pound down the power. There are still traces of understeer and tugging through the wheel, but it's vastly more polished than its predecessor.

Standing starts are still quicker with ESP on, but the wheel now doesn't try to tear free of your grasp, and the lighter (though still meaty) clutch and throttle are easier to balance.

Gear ratios and synchros have been revised for more fluid shifts from first through fourth, and the shifter itself is physically closer to the driver although, thankfully, there's now proper elbow clearance above the centre console.

The brakes are a standout, with little fade evident and decent feel through the pedal, and under hard braking the front suspension barely dives.

Damper settings are five percent softer in the front but eight percent stiffer in the rear, and larger anti-roll bars front and rear increase roll stiffness and reduce understeer.

Body and suspension rigidity is also much improved, meaning body control is taut and reassuring on rough roads, and there's virtually no kickback over corrugated bitumen. The trade-off here is a stiff-legged urban ride.

The steering is well weighted (if a little remote, especially when the diff is juggling the full 380Nm) and new, wider 225/40R18 Dunlop SP Sport rubber produces less chatter than was evident in the previous MPS, although tyre noise remains an issue on coarse-chip surfaces and above 80km/h (even though Mazda claims both NVH and wind noise have been reduced).

And, for a sports variant, the MPS is incredibly well-specced. Despite all the added tech, the base car's price has been cut by $300, to $39,690. The Luxury version adds bi-xenons, full leather, Bose stereo, rain-sensing wipers and adaptive headlights for $43,290 (now $400 cheaper).

The Q-car appearance of the previous 3 MPS was a good idea in theory, but with more than $9K separating the base MPS from the SP25, the punters told Mazda they want the world to know that they've bought the bad-boy boosted version and Mazda has obliged. The tough-guy stance and banzai bodykit certainly get noticed, but the bonnet scoop is also functional, feeding air into the (carry-over) top-mount intercooler.