The LC500 is a jaw-dropping car. Despite a 2017 release, it still turns heads like little else. Add in a carbon-fibre roof and the look-at-me Zinnia Yellow body colour over chrome wheels, and you start to wonder if this $205,200 coupe is simply all for show. It’s not. This special edition injects more ‘style’ (beauty is in the eye of the beholder, after all) with the bright hue on the outside.

More yellow can be found inside, with Mikado Alcantara door inserts and contrasting yellow stitching, while the semi-aniline leather seats are white. Mechanically, the 351kW/540Nm 5.0-litre V8 remains, but the $15,000 enhancement pack is now standard. The limited-edition variant is available for both the V8 and V6 Hybrid powertrains.

What a beautiful thing the LC500 is. Exquisitely designed inside and out, it feels properly luxurious, and the V8 sounds fantastic. It has a real NASCAR character, with heaps of grunt and whip-crack gearchanges from the 10-speed automatic transmission. Take it all the way to redline and you’ll discover an intoxicating hard-cut which sounds like heavy-artillery. Speccing the interior would require restraint to make the most of the design, but it’s a lovely place to spend time, and would make for a fantastic long-distance cruiser. You would have to learn to love the infotainment system, which makes an awful first impression, but the rest of the car more than makes up for it. If you choose the hybrid over the V8 you’ve made the wrong choice.

Usually, first impressions count. However, for me, my second experience with the V8-powered LC500 resulted in a transformed opinion. It’s easy to pass off the atmo Lexus as style over substance, but that’s doing it a massive disservice (just don’t buy the Hybrid). That engine, the 2UR-GSE, is an event. What’s more, the rapid-fire 10-speed auto jostles with it for the leading act. It sounds epic, both inside and out. And, when fitted with the slippy diff and rear-steer, the LC is far from outclassed in terms of dynamics. Its balance between GT-cruiser and performance couple is nicely straddled, too, and you could easily take it on a week-long jaunt. A sumptuous interior is the icing on the cake – and almost enough to make you forget about the horrid infotainment system… almost. In terms of a car fit for purpose and one you’d enjoy owning, the LC500 has to be right up there.

The LC never stops surprising. Everything about it leads you to believe it’s going to be some suave GT cruiser that’s about as aggro as bridge night at the bowling club, but switch it into Sport+ mode and it really amps up. It’ll hold big slides, the engine sounds demented at the top end and the steering really comes to life when the Lexus gets up on its toes. There’s real talent in this chassis and the engine is one for the ages. It takes a bit of time to key into this car, but it’s time well invested. That V8 is so good, I think I’d even put up with the infotainment system from hell for it. 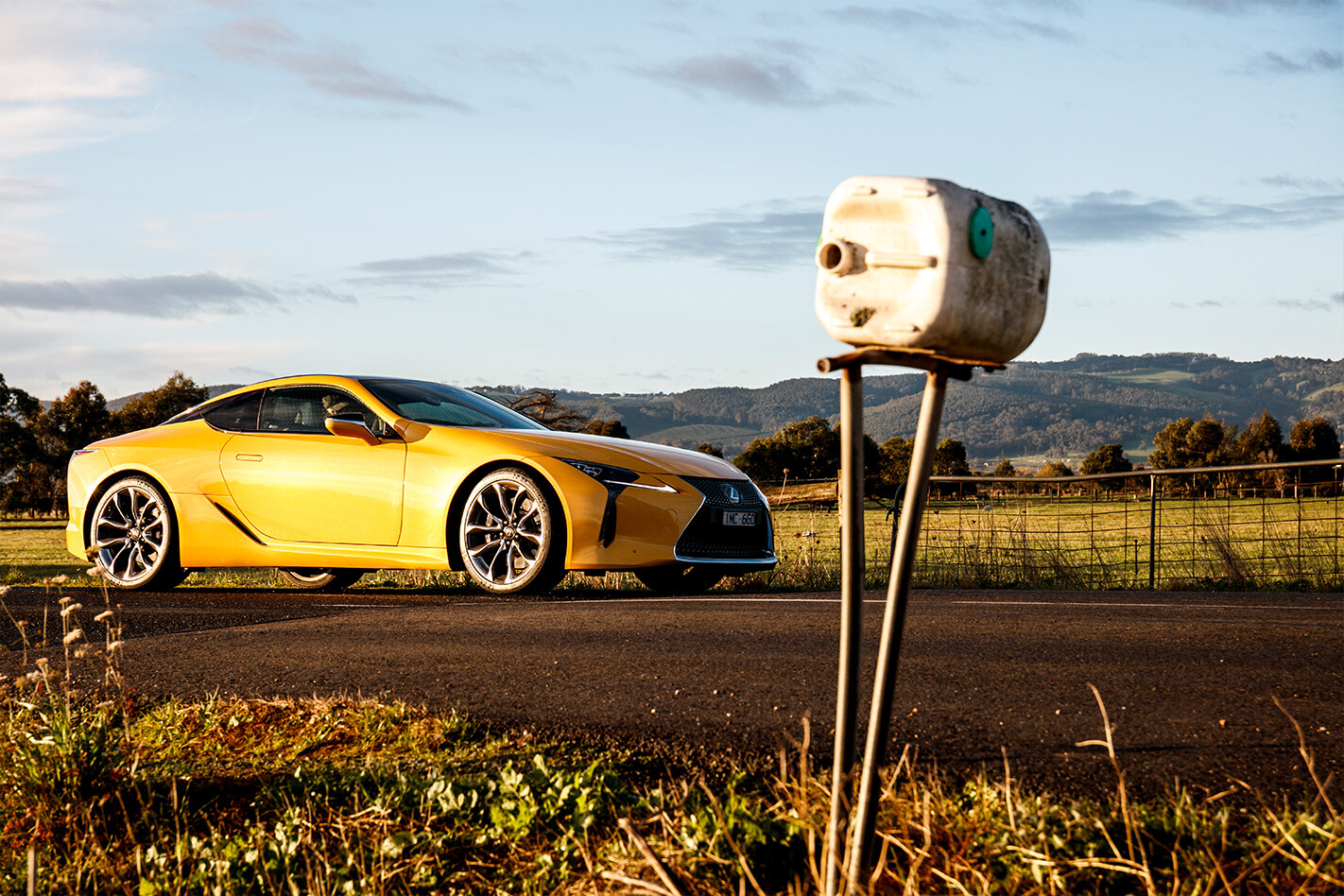 In a world where 400kW seems to be commonplace, the 351kW and 540Nm of the V8-powered LC500 could be viewed as being a bit meek. A kerb weight of 1970kg and a claimed 0-100km/h time of 4.7 seconds backs up suspicions further. However, this is a car that needs to be experienced to understand it. Because once you do, the quoted figures fade into insignificance. In terms of feel-good factor, the naturally aspirated Lexus rates highly.

Yamaha-tuned high-flow cylinder heads, titanium inlet valves and dual-length intakes afford the rev-happy nature of the LC. A development on the RC and GS F power unit, the 2UR-GSE raises its compression ratio to 12.3:1 and it can operate on an Atkinson cycle for extra fuel economy. Using the intuitive 10-speed auto to keep revs high is the best course of action for spirited driving. The gearbox itself is a revelation. The torque-converter auto shifts when called upon and blips the throttle hard on down shifts. The aural sideshow is a welcome benefit.

The sound the 4969cc eight generates is nothing short of epic. Sophisticated and cultured, this is a soundtrack to please all kinds of tastes. In truth, it makes the LC500 feel much faster than it actually is. The V8 can be thirsty when pushed, but it’s by far the better choice over the soulless Hybrid.

For a car verging on two tonnes and riding on 21-inch wheels with low-profile tyres, the LC500 is both dynamically impressive and comfortable in equally surprising measures. The special edition comes with a Torsen limited-slip differential and rear-wheel steering, both aiding agility and seemingly reducing the two-door coupe’s bulk. Impressive yaw angles are achievable with the progressive movements, while the traditional rear-drive behaviour increases the fun factor. The rear steering is more intrusive than other systems, rendering the coupe a little twitchy until you get used to it. The carbon-fibre roof does little in the way of weight saving or lowering the centre of gravity.

The suspension and damping is impressive, and updates provide a more supple and cohesive ride quality. Thanks also to adaptive dampers, there’s a duality of character that favours both the ‘cruiser’ vibe and performance intent. What’s more, despite rather wide 275-section Michelin Pilot Super Sport tyres (245 up front), tyre roar and NVH levels are sufficiently suppressed. Ultimately, the LC500 is more than a one-trick pony. Pass it off as a lumbering, floppy coupe at your own risk.

If you’re going to sign off on an exterior like the LC’s, you’d better hope the cabin is a match. And it is. Although, that’s not to say it’s without vices. Cue the infotainment spiel that accompanies most new products from Lexus. Still, the LFA-style instrument cluster is cool and the Shrek ear-like controls for the drive modes and traction controls are definitely unique. The 13-speaker Mark Levinson audio system is top notch, while the special edition adds yellow Alcantara and carbon-fibre kick plates.

Read the PR spin and you’ll know that the cabin has been inspired by ‘Takumi craftsmanship’, but the reality is that the luxurious design is a feast for the senses. The level of detailing is impeccable and the overt style is far from boring. The two back seats are for occasional use at best, but if you did use your LC500 as a weekend getaway chariot, there’s a 197-litre boot – which is actually more useful than its capacity would suggest. Overall, the interior ambience is uplifting. It makes you feel special in a way some grand tourers don’t for much more coin.

Despite being overtly modern, the LC500 has an honest, old-school charm about it that’s hard not to love. The combination of the melodic bent eight, slick 10-speed auto, LSD and rear-steer renders the imposing LC more than just a concept car for the road. It is dynamically talented, and thanks to the suspension tweaks, the two-door coupe is even more comfortable and compliant. Matched with an exquisitely detailed interior and ultimate roadside appeal, the LC500 carves its own naturally aspirated niche in the sea of GT coupes.