Surviving a one night stand with the Lotus Exige Sport 410

Hard and fast, things are about to get intense as this supercharged track-focused monster haunts some of the best Targa twisties in Victoria.

As the afternoon sun dips behind the trees that trace the quiet Victorian lakeside town of Eildon, I don’t have even a second to question the idea that modern sports cars have become too kind.

The light blots away to shadow and the winter-cold tarmac remains wet, with the moss sod right-hander ahead about as moist as the palms of my hands. The Lotus Exige underneath my feet might be considered modern, but it’s not bloated with computers that make the art of driving fast too easily accessible. It demands commitment and skill, and I’m on the edge of my seat. It is as raw, analogue and brutalist as sports cars get, but it gives so much reward. 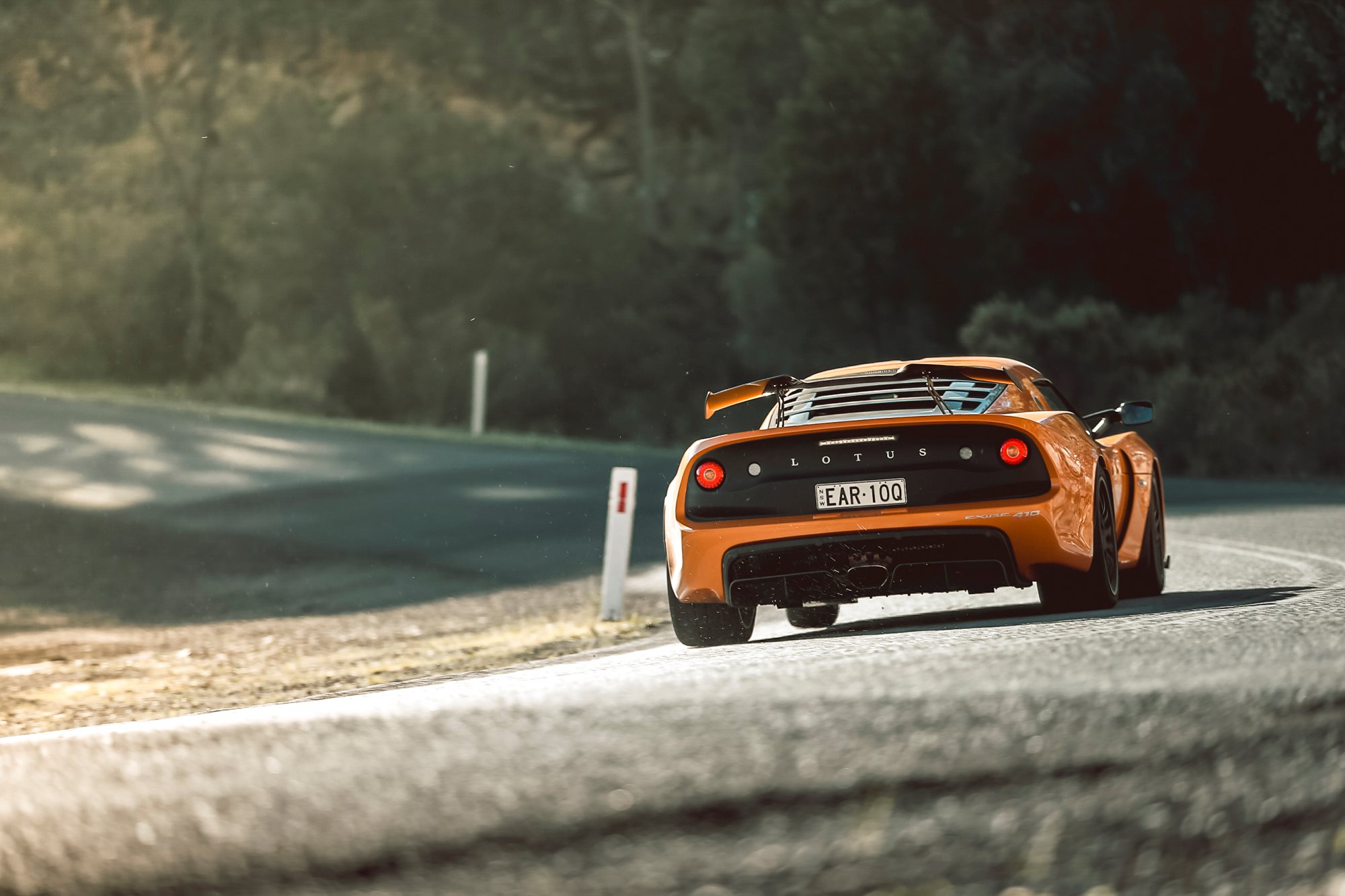 We spent two days in Lotus’ 80:20 creation – the denomination intended to explain the Exige 410’s split personality of 80 percent track, 20 percent road – on some of Victoria’s best Targa roads.

It was an enlightening experience that provided thrills and challenges in equal measure. If you ever you feel like you need to spice up your life, have a thrash in one of Lotus’ most extreme creations.

Powered by a Toyota-sourced 2GR supercharged 3.5-litre V6, the Exige Sport 410 sends power to the rear wheels via a six-speed manual gearbox. Ratios are selected with an aluminium open-gate manual gear shifter that looks like it could take pride of place in a modern art gallery. Peak power of 305kW (410 horsepower in old money, hence the badge), arrives at 7000rpm, while torque tops 420Nm at 3500rpm. 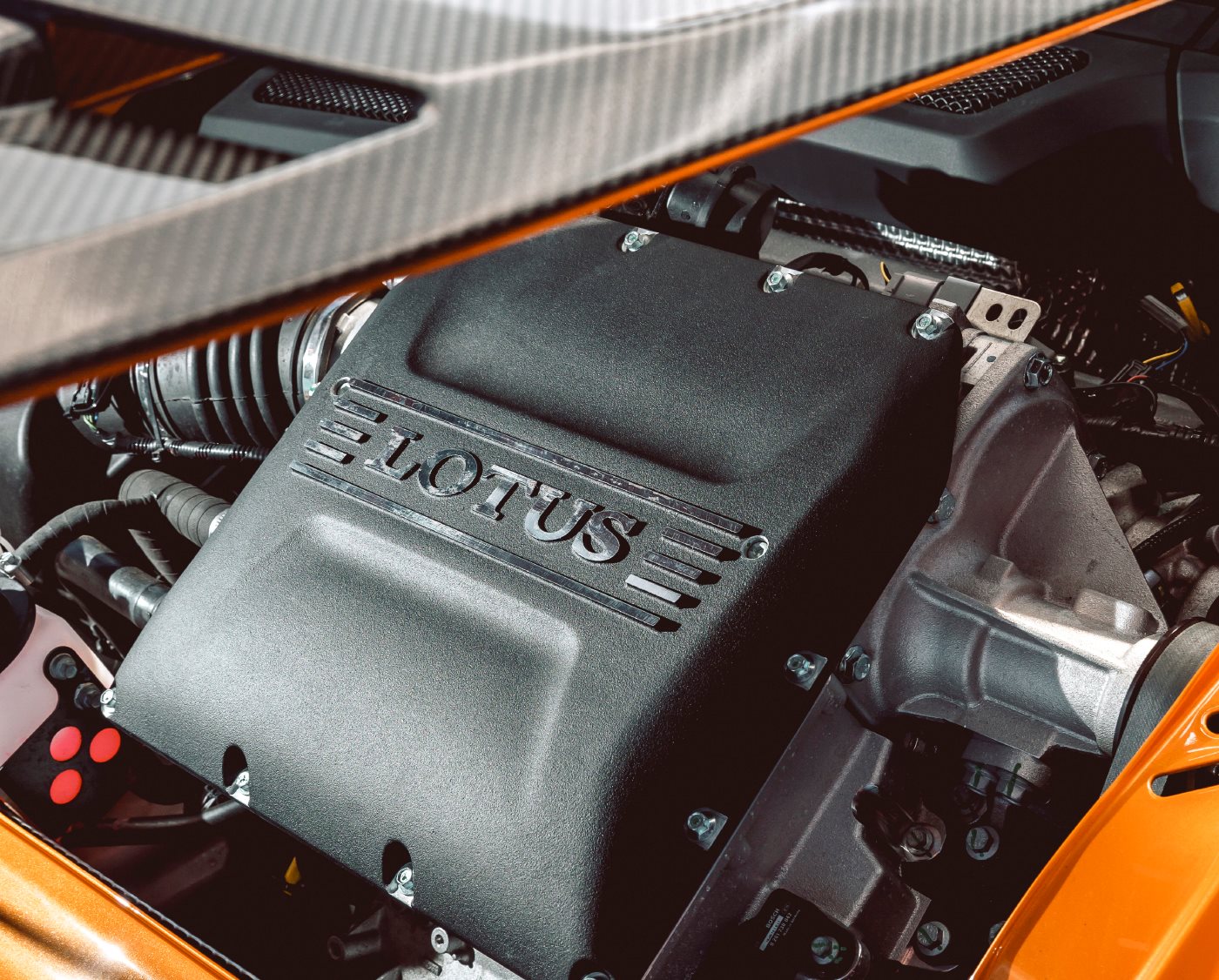 There’s no doubt as to where the Exige’s power is sourced from when nestled in the cabin, as just about the only thing you can see in the rear view mirror is the beefy supercharger sitting atop the engine. Also in direct eyesight is the throttle cable.

It’s about as comfortable a cabin to sit in as hiding in the cupboard, and getting into the seats is a lesson in human origami while removing yourself is a truly indignant experience. But we are here for the thrill of the drive. 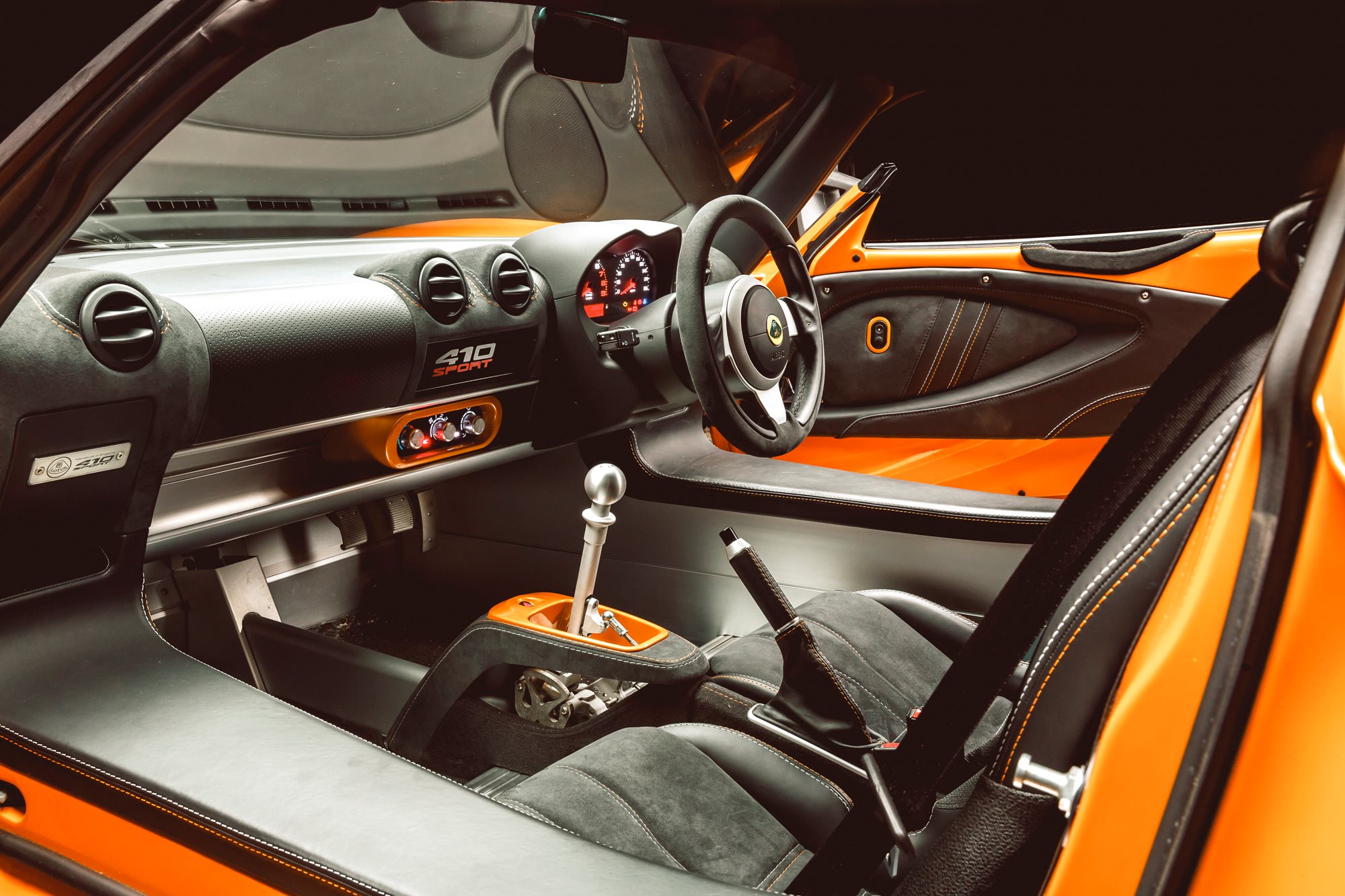 Acceleration is brutal. Plant your right foot into the firewall and first gear disappears in an instant, with the opening of the exhaust valve at 4500rpm a better indicator of nailing the change in ratios than the shift lights – the revs just build too damn quick in the first gear to even bother getting it perfect.

For the subsequent gears the three shift lights in the tachometer allow you to eke out as many revs as possible. The shift action is slick and satisfying, particularly when done in urgency. However, eclipsing the joy of the gear change is how the Exige Sport 410 sounds. Above 4500rpm a valve in the exhaust opens, unleashing a truly demonic howl that encapsulates the spirit of old-school Formula 1. It’s truly race car-spec. For unsuspecting outsiders, it’s probably frightening. Those wanting to save an extra 10kg from behind the rear axle can option a titanium exhaust system, which takes the aural delights a step further. 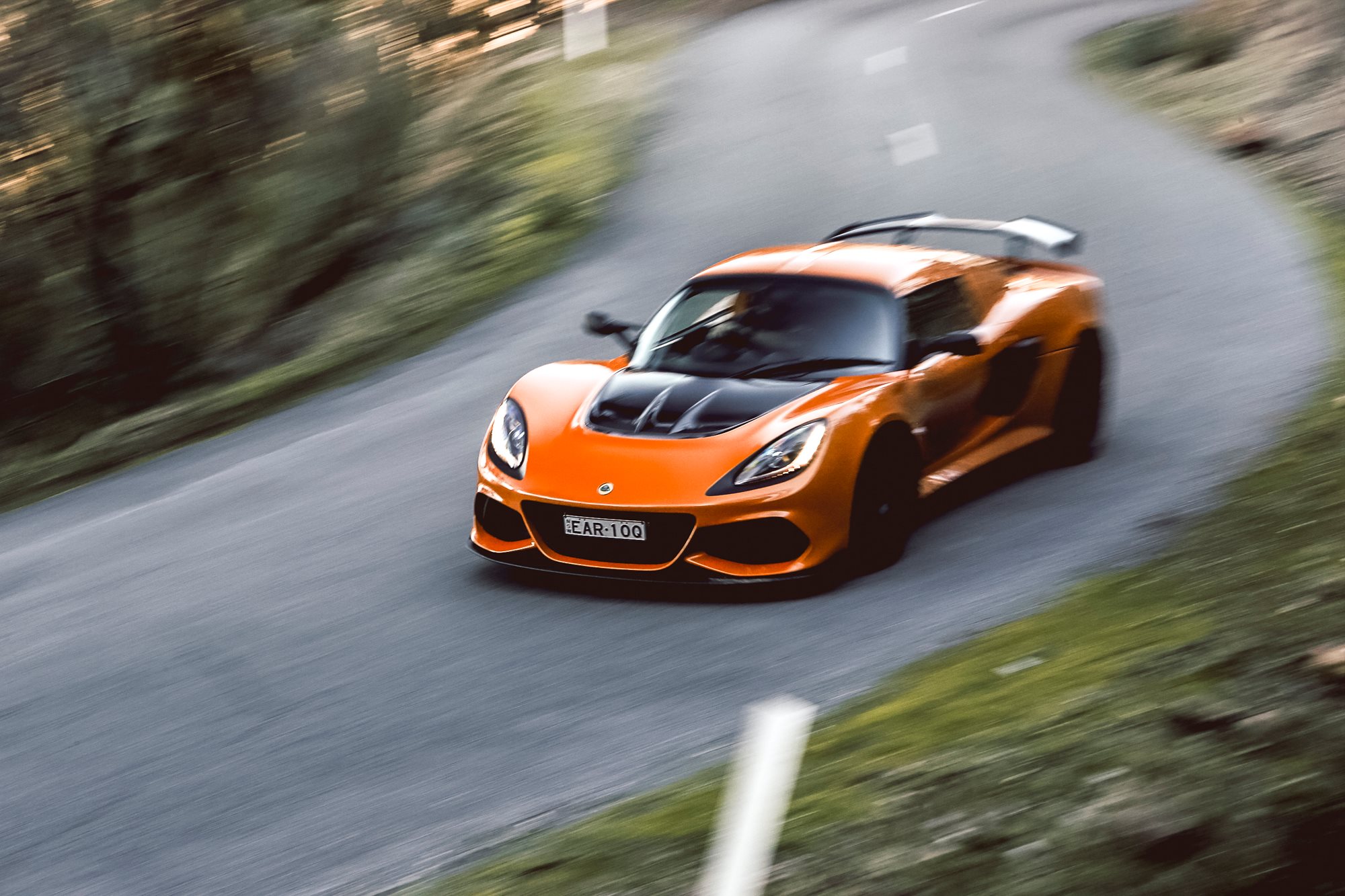 The six-cylinder heart of the Exige 410 isn’t simply an uprated version the Sport 350’s V6, instead using a detuned version of the more extreme 430’s engine. Plenty of other components are lifted from the 430 including oil cooler, larger clutch, AP Racing J-hook brake discs and three-way adjustable Nitron dampers – all of which have been tuned to suit the 410’s more compliant road character. Upgrades over the Sport 350 included a new water-to-air chargecooler, an additional front radiator and new water-to-oil oil cooler.

Australian-delivered Sport 410’s differ slightly from international models. The carbonfibre race seats are replaced with those from the Sport 350 as standard, while the front splitter, wing blades in the front clam, and rear diffuser are finished in glass fibre reinforced plastic (GFRP) rather than carbonfibre. A lithium-ion battery is replaced with a standard unit, while air-conditioning is included as standard. 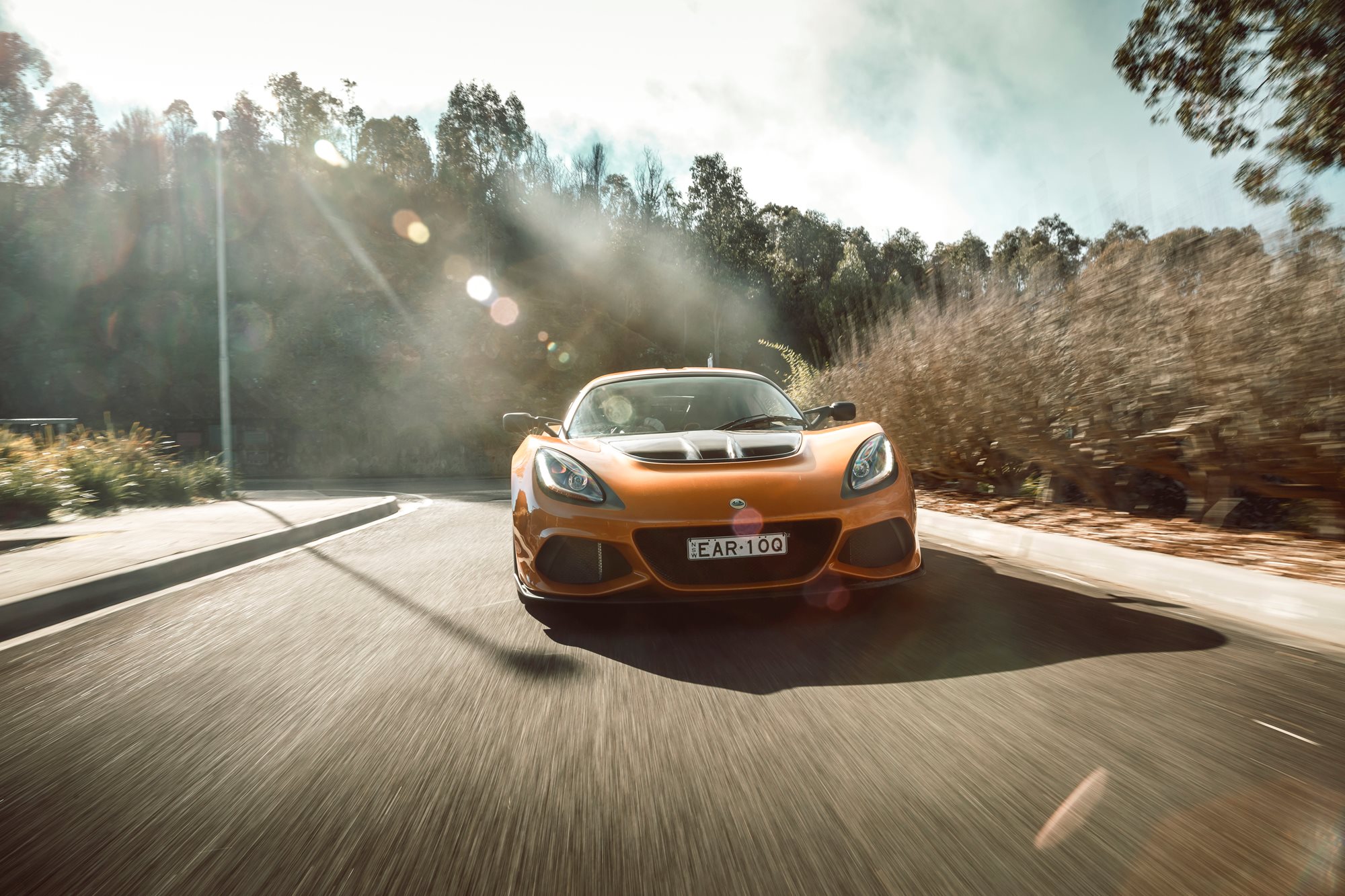 Eat a particularly hearty lunch and you’ll be adding a decent percentage to the Lotus’ weight. With an 1110kg kerb weight, the 275kW per tonne power-to-weight ratio is better than a Porsche 918 Spyder.

Wheels’ independent performance testing pours cold water on Lotus’ claimed 0-100km/h sprint of 3.4 seconds – our data suggests you’ll be cracking the tonne in 3.9 seconds. But that’s nothing to sneeze at; in fact it makes the Exige Sport 410 the fastest manual car we have ever tested. For context a Porsche 991.2 911 GT3 Touring with three pedals will get to 100km/h in 4.3 seconds from a standstill. 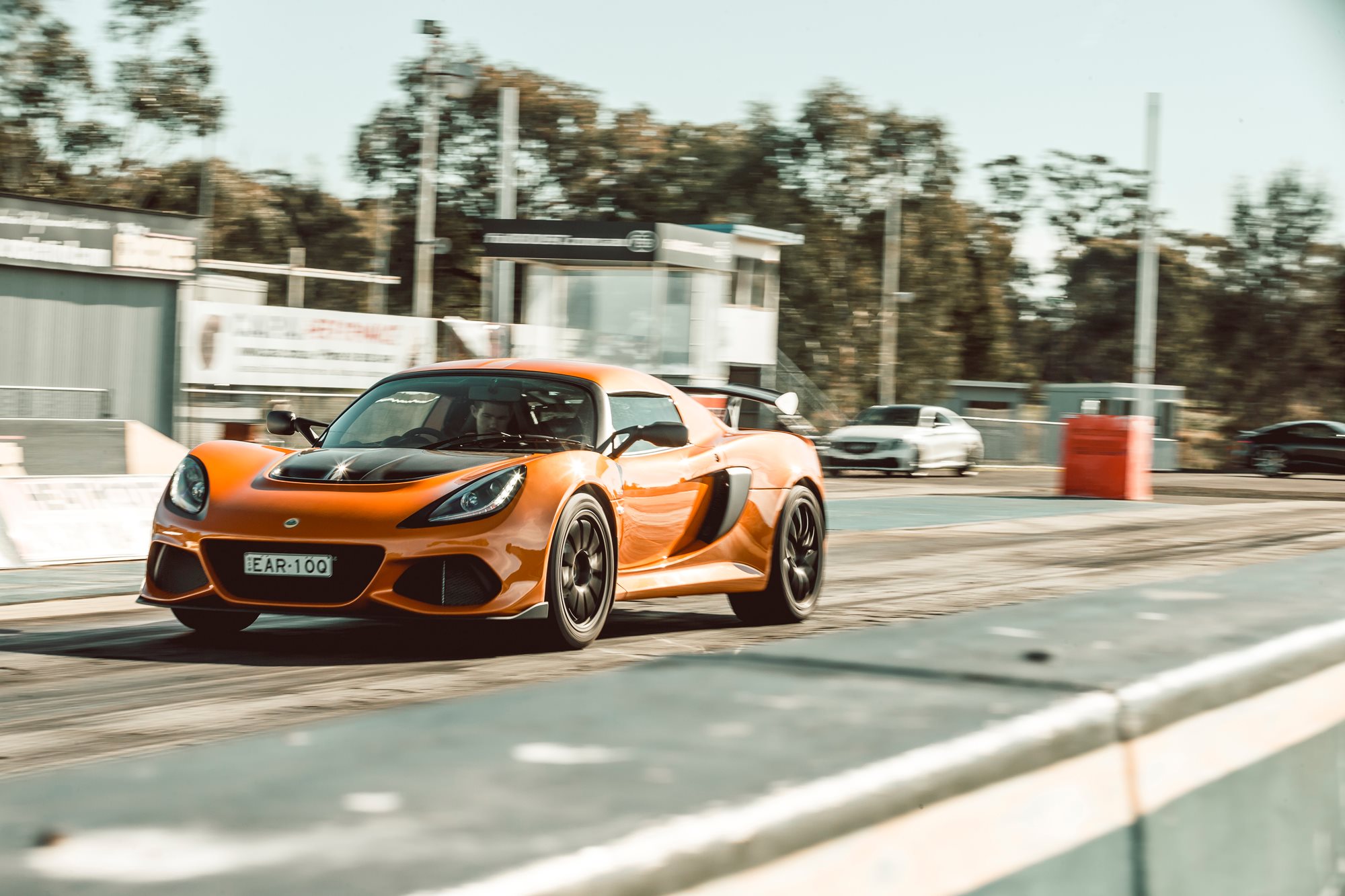 The front and rear anti-roll bars are adjustable and sourced from Eibach, and were set to their softest setting on our test car, along with the dampers. Despite this, the ride still remains harsh, but that’s to be expected for a car with 80 percent of its focus on the track. The Exige Sport 410 demands your full attention as it bucks over mid-corner bumps, though its dampers settle quickly and the chassis is more flexible than expected for a low and firm sports car. 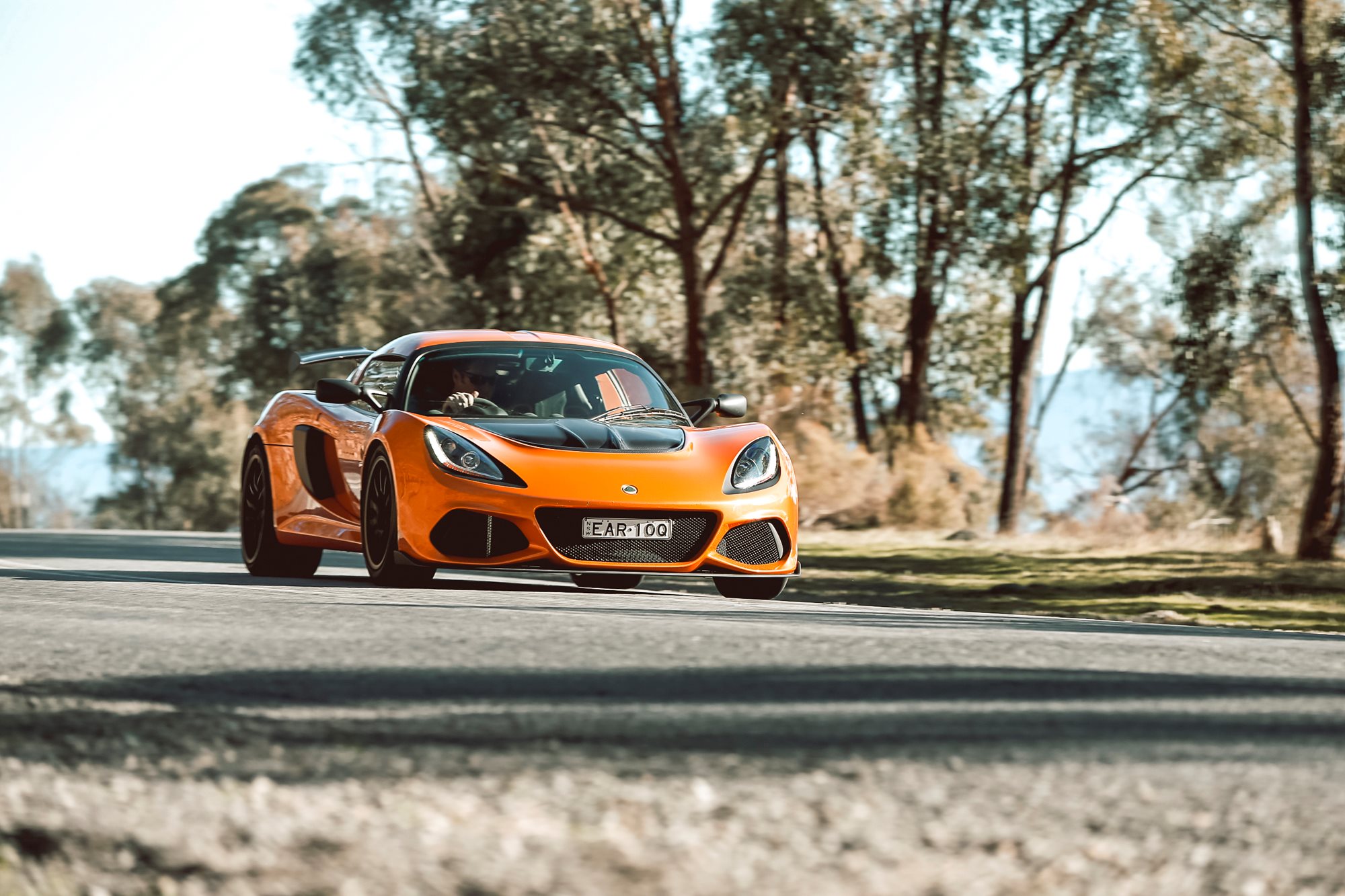 Lotus’ of old had an unenviable reputation for brake fade and poor pedal feel when it came to stopping power, but not the Exige Sport 410. The two-piece AP Racing brake discs with forged four-piston callipers haul the featherweight coupe to a stop with face-warping efficiency. Pedal feel is excellent, and extended uses yielded no fade during a belt across the high country.

There’s no power steering, meaning slow-speed maneuvering is unpleasant and tiresome at best. But at speed Lotus’ decision comes into stark clarity. Steering isn’t the quickest, but it’s wonderfully direct, and extremely communicative, giving the sense your fingertips are brushing the road underneath the front tyres. 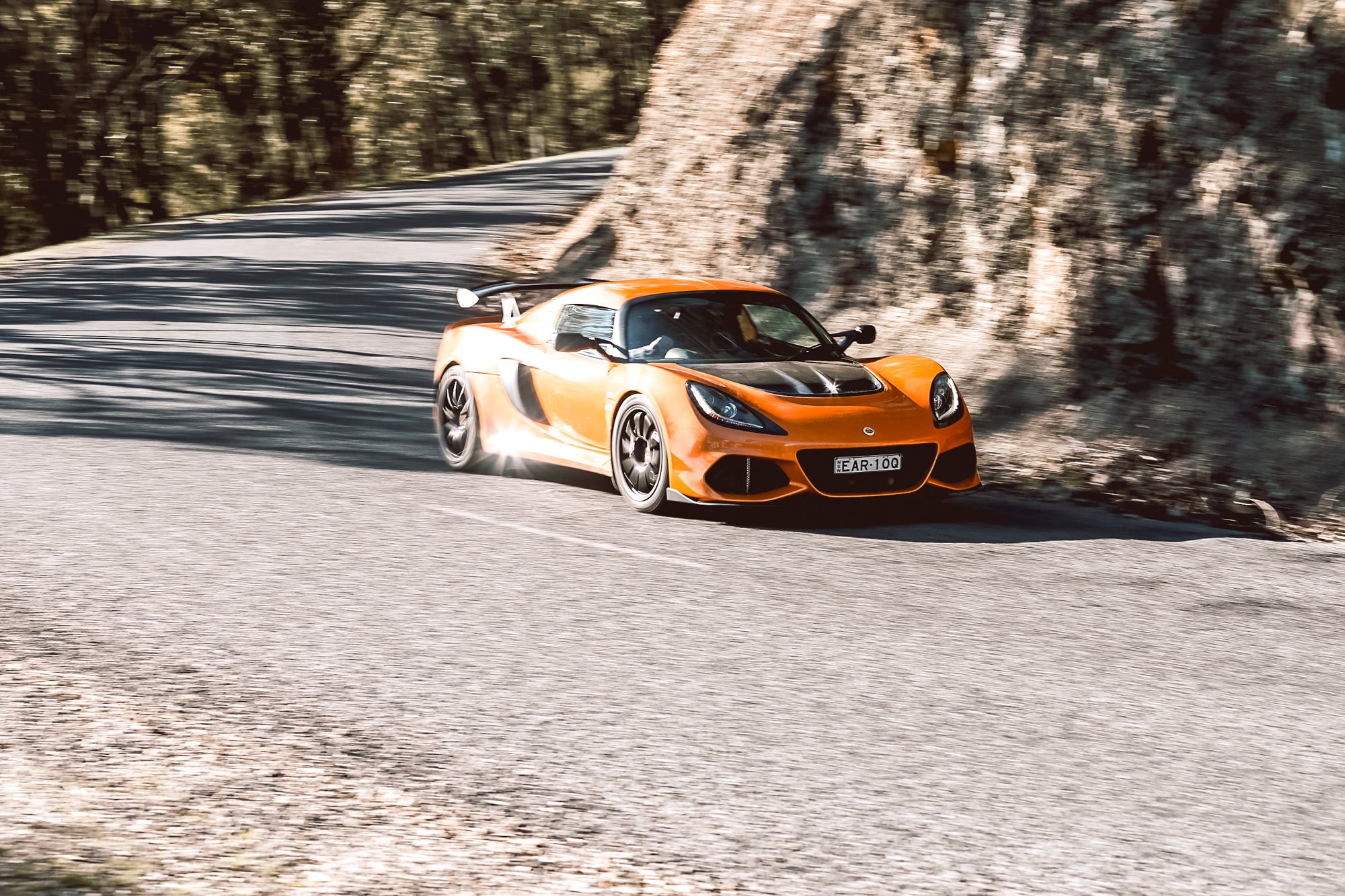 The front lip, rear spoiler, and sizeable diffuser aren’t for show. Lotus claims that the Exige Sport 410 generates 70kg of downforce at the rear, and 45kg up front, for a total of 115kg of downward pressure at 280km/h. You don’t need to be nearing 300km/h to get neck-straining grip though the Michelin Pilot Sport Cup 2 tyres that adorn each corner in rather chunky specifications (215/45 ZR17 front and 285/30 ZR18 rear), and the meaty rubber allows for more compliance when riding bumps, and retains impressive bite once warmed up. Mid-corner speed is a specialty of the Exige Sport 410, with the chassis and tyres relishing fast and flowing corners.

When the road begins to snake and twist away from you, and you lean into the Exige’s immense well of ability, it’s a visceral and thrilling experience. Lotus claims that the Exige Sport 410 “demonstrates that race car responses can be enjoyed far away from the race track”. While we reel at the thought of regurgitating PR guff, this assessment is spot-on. Priced at $159,990 plus on-roads, thrills that equal the 410’s race car-like attributes don’t come much cheaper. You’d need to spend significantly more than that to find another road car which delivers such an unadulterated and raw driving experience. Long may we continue to be blessed with the pure driving experience of cars as analogue and unforgiving as the Lotus Exige Sport 410. 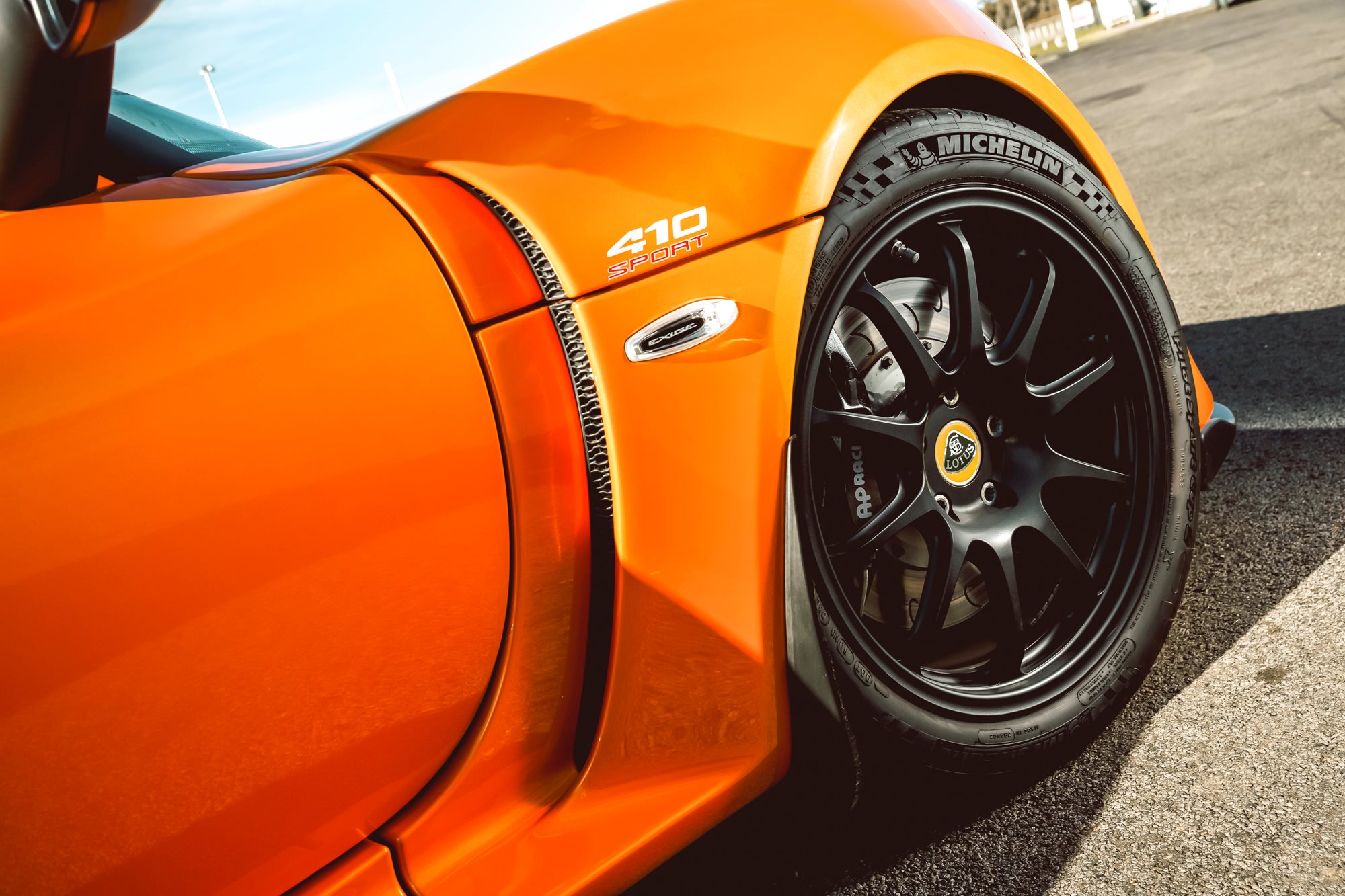