Benz’s baby four-door coupe shifts into second-gen guise. Gone is the droopy posterior of its predecessor and in comes greater athleticism and an interior that offers functionality beyond an S-Class.

WHAT IS THE MERCEDES-BENZ CLA?

Introduced in 2013, the original CLA used the A-Class’s platform to spin off a four-door sedan that overachieved beyond its proposed niche. The second-generation car has some big boots to fill, but now that Mercedes understands this car’s value, they’ve thrown everything they know at it.

Mercedes flew us to Munich, the home turf of its rival BMW, to demonstrate that the CLA could hold its own even on away ground. It’s been a big success in even more distant climes, Mercedes having shifted more than 15,000 units here in Australia. We wanted to see if the latest car could continue that fine form line 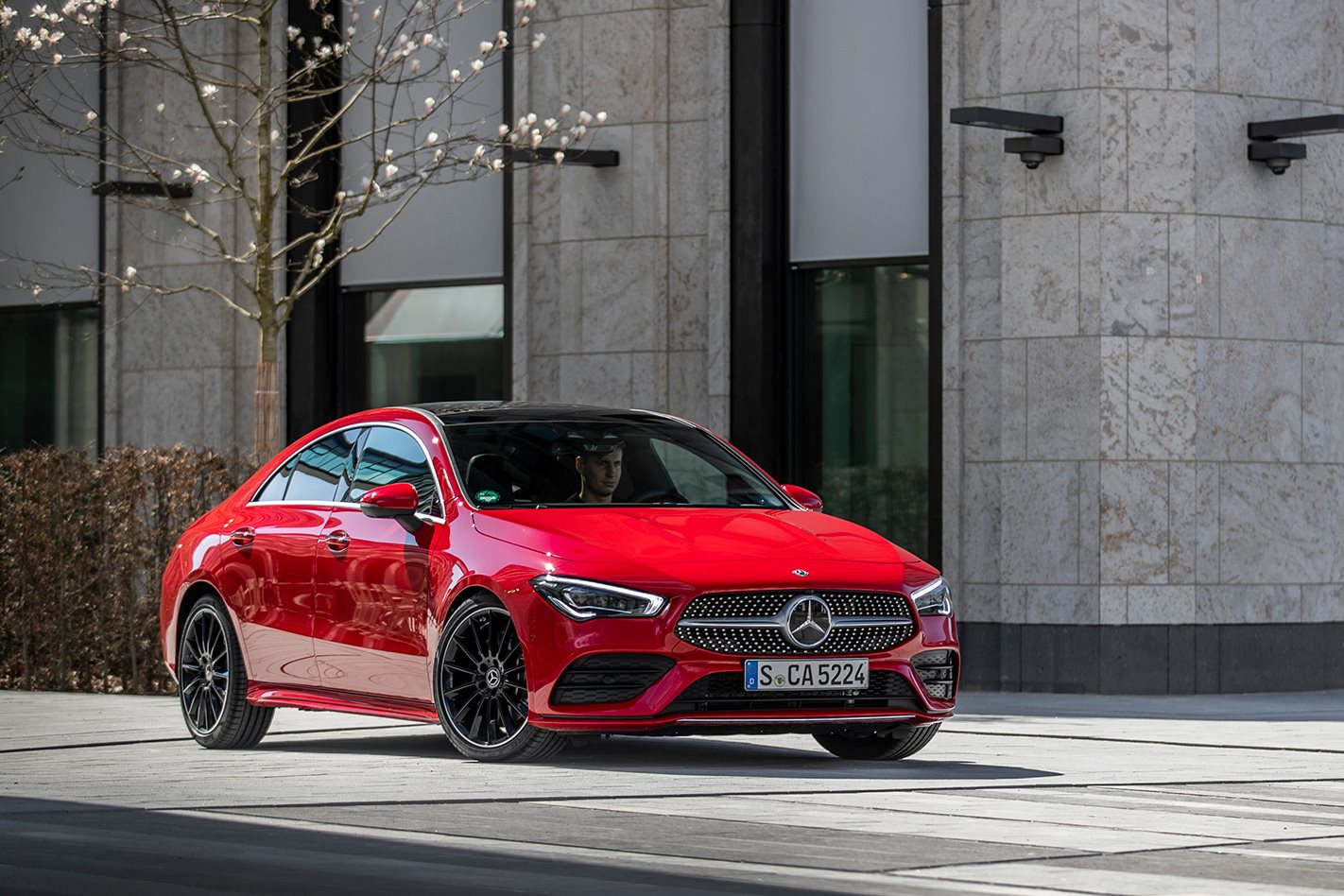 YOU MAY well be wondering why Mercedes-Benz needs two four-door sedans spun off the A-Class platform. On the face of it, it seems like overkill, offering both an A-Class Sedan and a CLA when both share the same wheelbase, run off the same chassis, use the same engines and feature the same interior tech. So why would you opt for the CLA?

The car’s footprint seems as good a place as any to start. Compared to the more upright sedan, the CLA has a 45mm wider front track and a 55mm wider rear. That might seem an esoteric statistic but it underlines how this car is positioned. Mercedes calls it the athlete of its compact-car range and there’s more to that than just niche marketing spin. 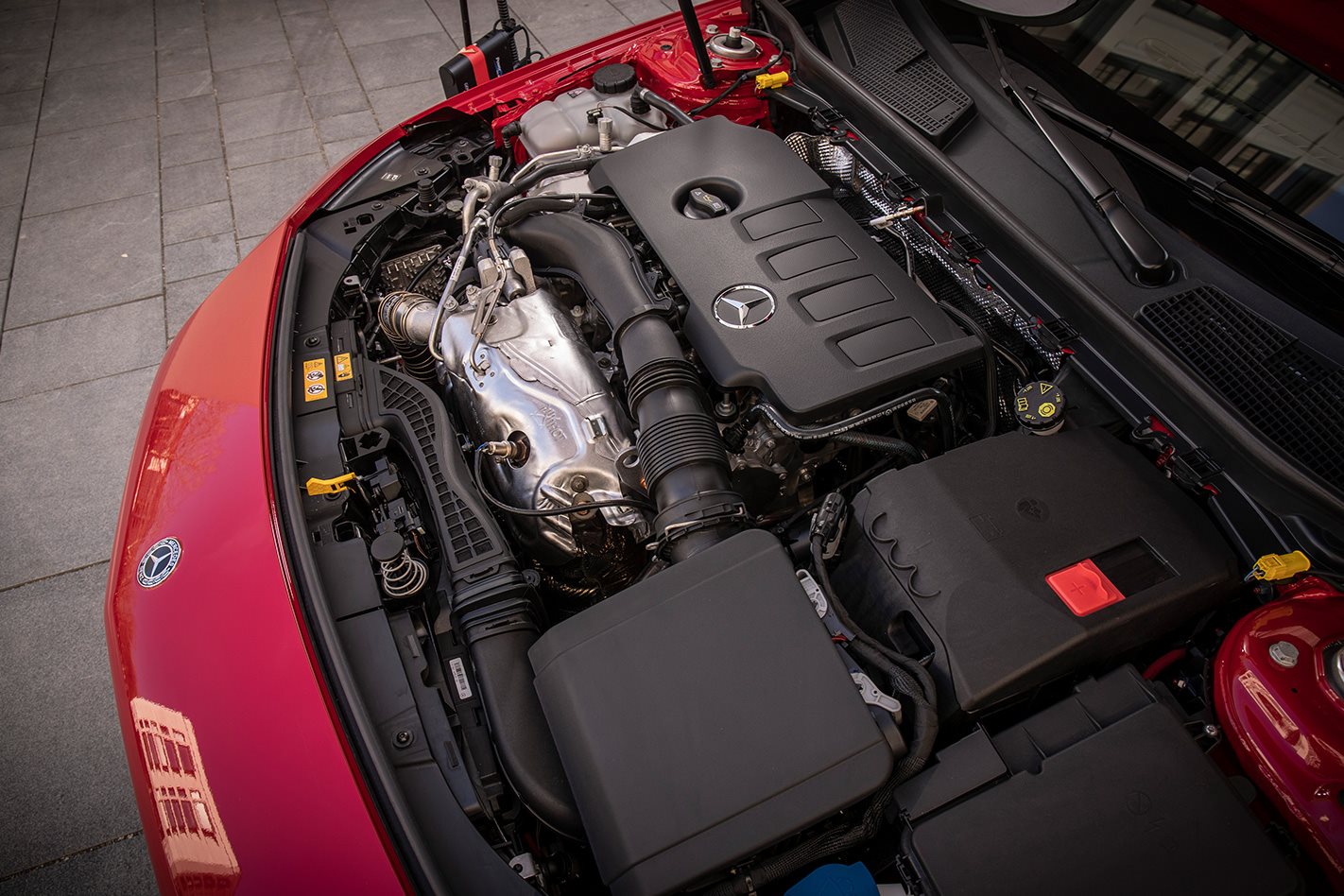 Australia’s set to receive the front-drive 120kW/250Nm CLA 200 first, closely followed by the all-wheel drive 165kW/350Nm CLA 250 4MATIC. The CLA range always top-weighted in the past, with CLA 45 AMG being a particularly big part of the Australian product mix, and the local importers expect that form line to continue, with the CLA 250 4MATIC initially being the most popular version. No diesels or wagons are scheduled for our market, but since we drove the car, Mercedes has shown images of the 225kW/400Nm CLA 35 AMG. The existence of the 35 allows for an even more extreme version of the CLA 45 AMG range topper, rumoured to boast at least 310kW.

There’s something very right-sized about the CLA 250 4MATIC, however. It’s certainly brisk enough, stepping crisply off the line to 100km/h in just 6.3 seconds, the seven-speed dual-clutch transmission squeezing the most from the 2.0-litre four-cylinder engine. All Aussie cars will arrive in AMG Line trim with 18-inch alloys, and one box you probably ought to tick is that for the adaptive damping system which, when set to comfort, takes the edge off the amount of bump and thump from the wheels on poor surfaces. It feels planted, with strong body control, and the additional 60kg of the all-wheel-drive system doesn’t seem an unreasonable impost. 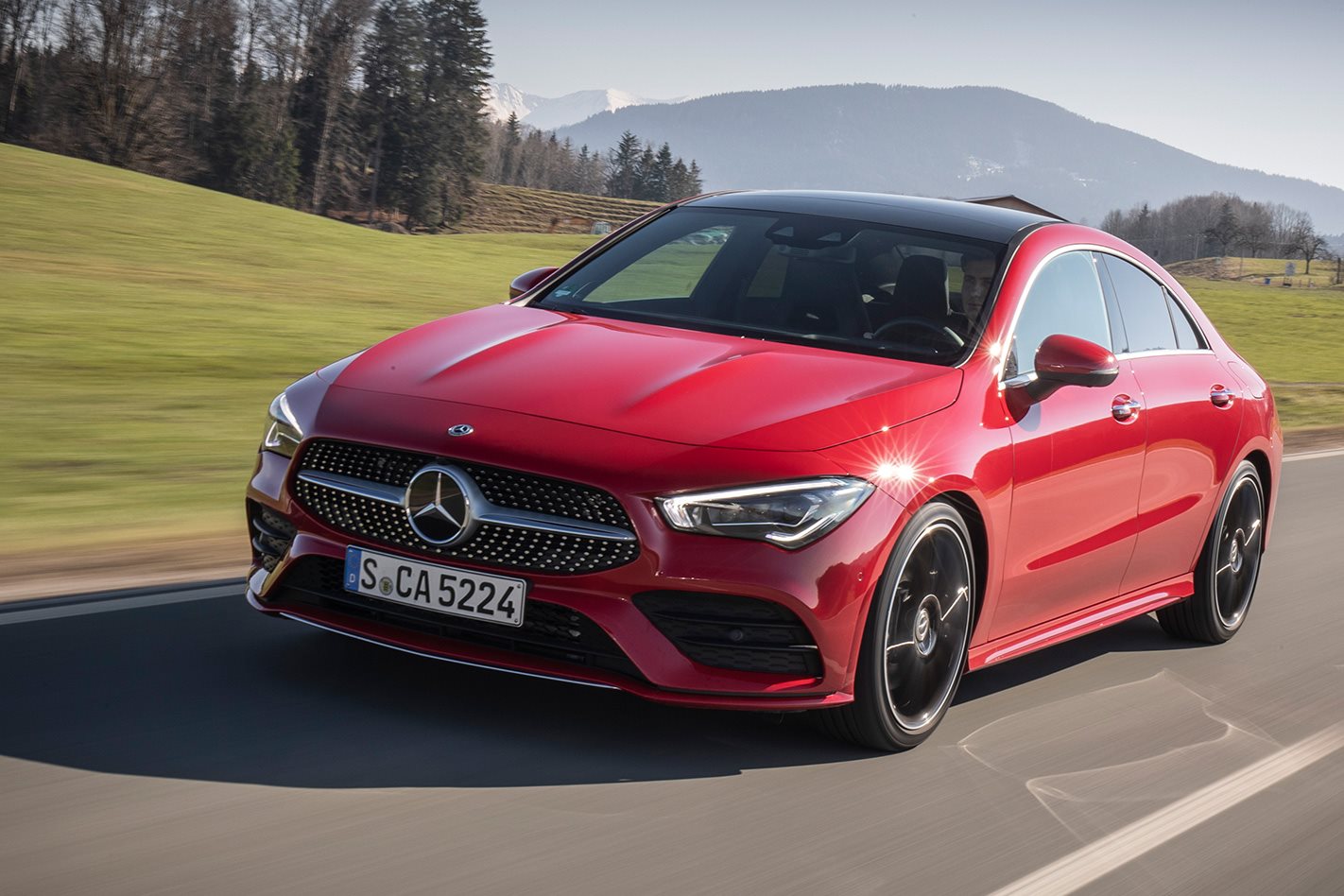 The electrically assisted steering is relatively crisp, the brakes are punchy and the driver assist systems top drawer. Quite why Mercedes can’t find a better solution for gear selection than a column stalk, however, is a perpetual mystery. A sound symposer beefs up the engine note in the cabin, although it’s still not particularly inspiring. If you can make your engine sound like anything, why plump for ‘atonal four pot’?

The more observant among you may well have already twigged that the asking price for the CLA 250 now overlaps with that of the C-Class range. There are a few reasons why the junior sibling is the better buy. Firstly, it’s now bigger than a C-Class. It’s fully 48mm longer and 53mm wider than its predecessor, and that also makes it 2mm longer and 20mm wider than a C-Class. It’s also a good deal more modern inside with its clever MBUX infotainment system and clean styling, which makes the facelifted C look a bit dated and gaudy in comparison. It makes an A-Class sedan look a bit muted too. 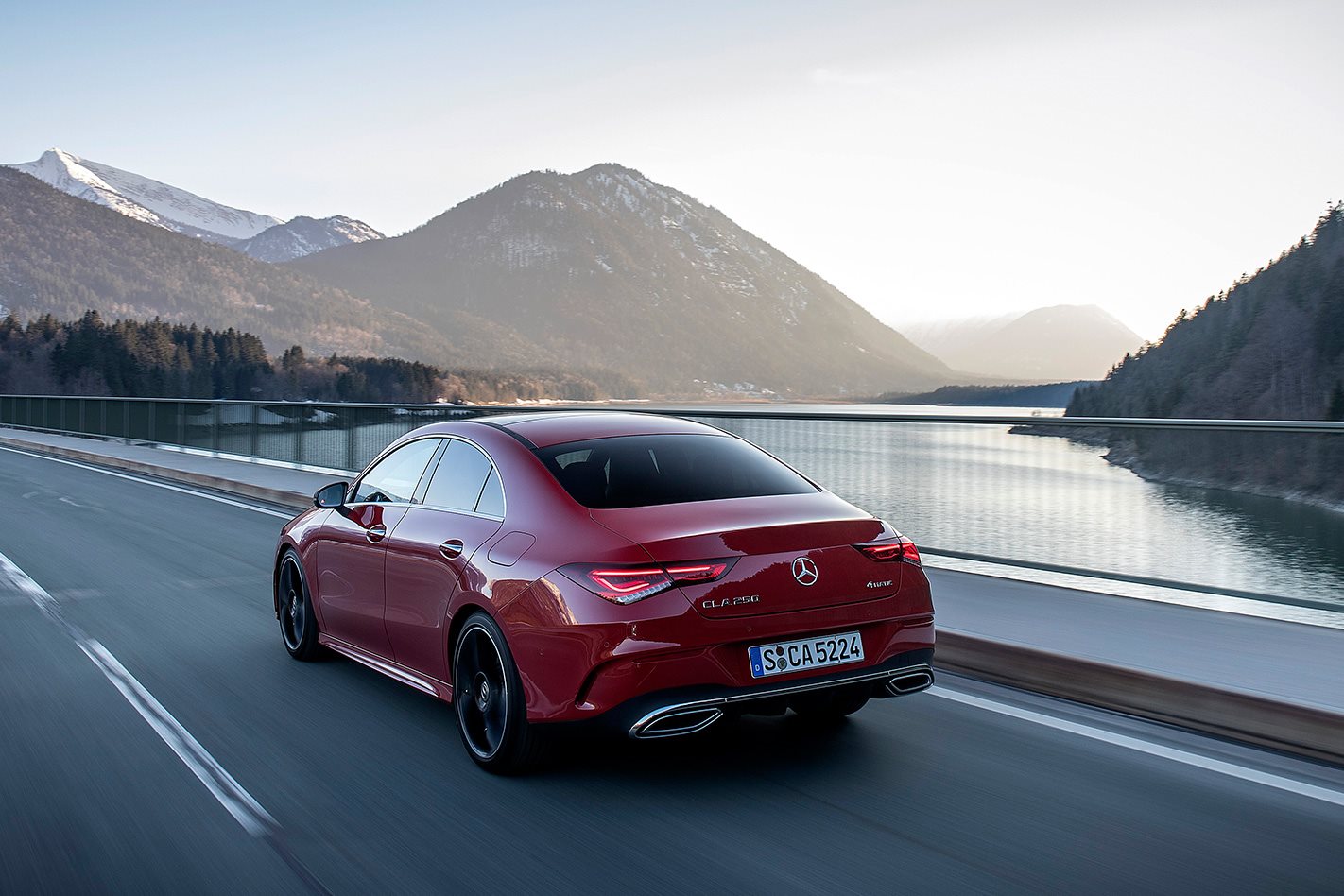 Finally, there’s the exterior design. Clearly we’re creeping into the realms of the subjective here, but can we talk a little about the shape of the old car? Most pertinently, its derriere? There was always something a little droopy about the old CLA’s rear end, something a little apologetic, unresolved and, to a small corner of the southern hemisphere, AU Falcon Forte about it. Designer Achim Badstübner has clearly sent the CLA for a Brazilian butt lift because the latest car raises the rear deck by 10mm to give it a perter, more confident look.

For almost everything else about the styling, 50mm is the magic dimension. That’s how much thinner the front and two-piece rear lamps have become, how much lower the leading edge of the bonnet is, how much wider the width across the front wheelarch flares is, the latter allowing for a more Coke-bottle shape in the flanks. As is the vogue with current Mercedes designs, extraneous swage lines have been chamfered away, leaving one rising character line on the flanks and a lot of subtle surface contouring to work the light and shade when the car’s moving. 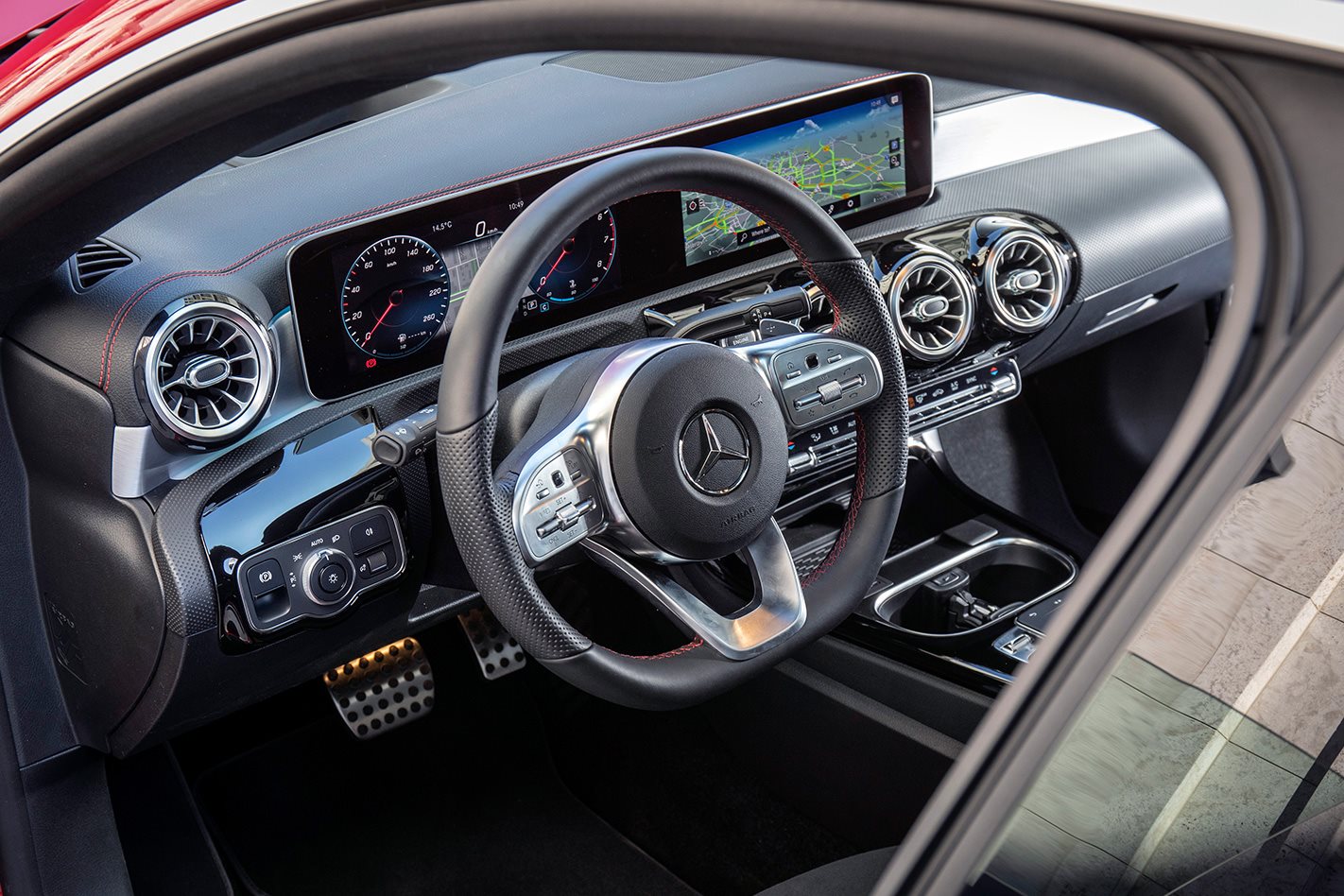 As well as the aesthetics, a lot of work has gone into aerodynamics. Its broader frontal area means the CLA can’t quite equal the record-setting A-Class Sedan’s aero efficiency, but the Cd figure of 0.23 is excellent and noise suppression is especially good for a car with coupe-style frameless glass.

That slippery shape also translates into excellent fuel economy, the CLA200 with 7G-DCT ‘box managing 5.5L/100km and the CLA 250 4MATIC with the same transmission 6.3L/100km. That’s just as well, because the fuel tank measures meagre 48 litres, which could be an issue for the forthcoming AMG variants. 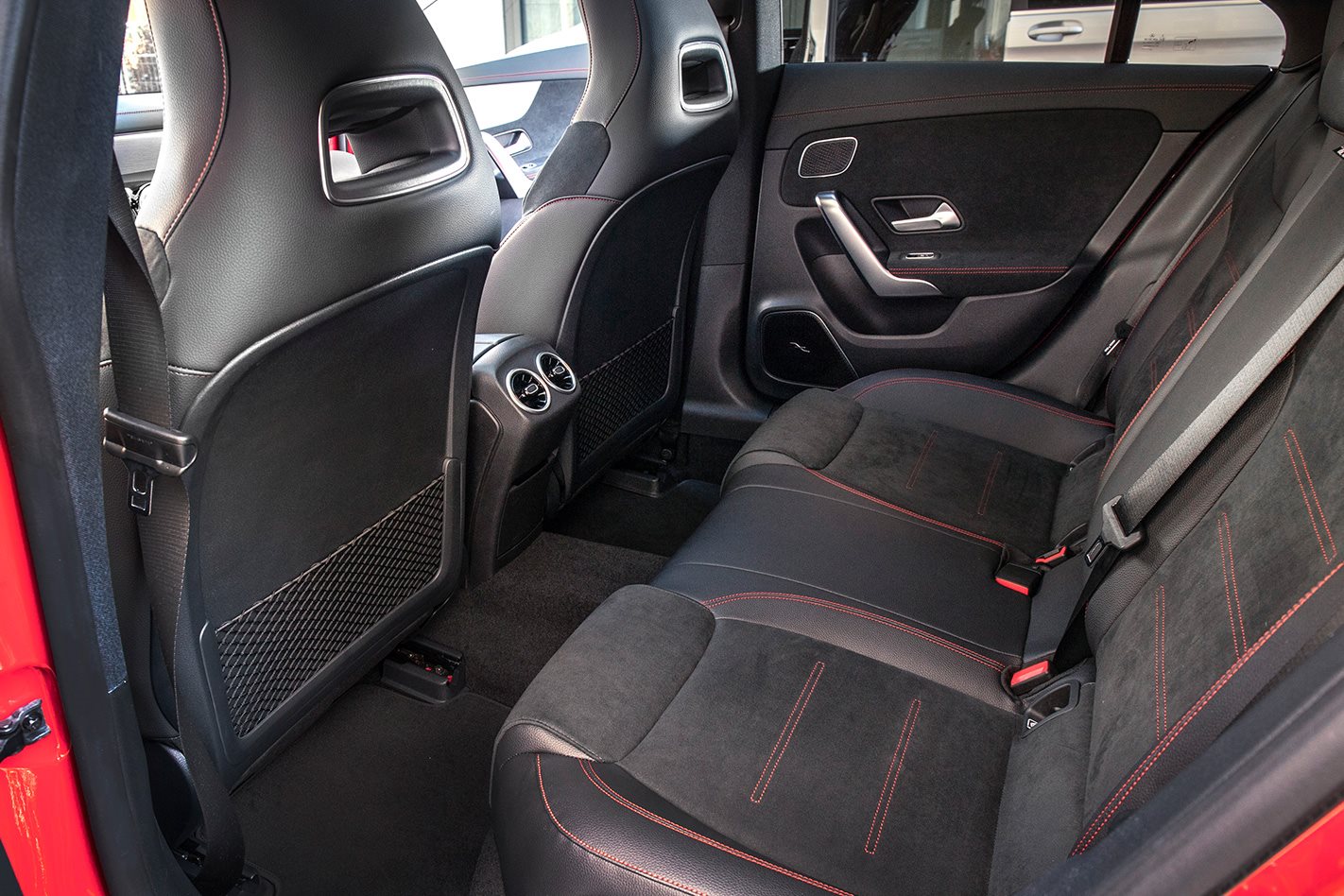 The CLA puts in a strong performance. Badstübner referred to the car as ‘the punk’ during its development, citing the fact that the design team could get away with all sorts of things that would never fly on more buttoned-down C- and E-Class models. Its designer is not in any way conflicted about these models treading on each others’ toes. “The C-Class is now an old car, it’s on its facelift,” chuckles Badstübner. “I would buy the CLA, no question.” I’m with the guy with the crayons on that one. 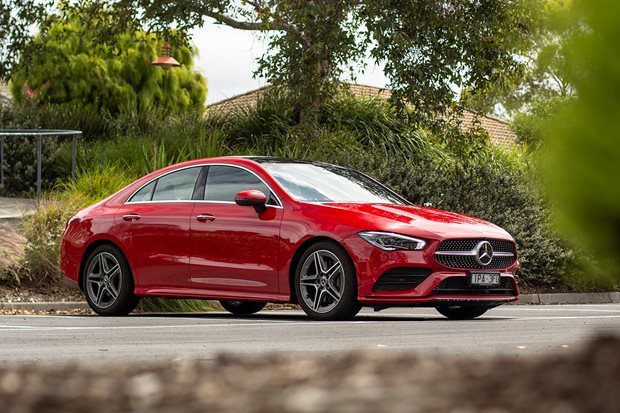