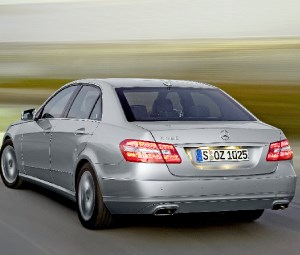 We genuinely liked the last (W211) E-class and not just for the mad AMG versions that came with it, like the supercharged E55 and the now-departed E63.

After its 2006 mid-life update in particular, when a new 5.5-litre V8 was accompanied by keener handling and jazzy lights, the last E came across as a pretty classy act.

But the all-new one – dubbed W212 – simply blows that car away, and not just in the areas of technology or aerodynamics or efficiency. For the first time in generations – since the iconic 1986-1995 W124 in fact – a mid-sized Mercedes sedan can honestly claim to have one of the best interiors in the world, mixing exotic new trims (like the Elegance’s optional, and stunning, open-pore brown-ash wood) and clever electronics (like attention assist and lane-keeping assist) with a number of classic design cues.

The trapedzoidal shape of the new E’s instrument binnacle is pure W124, while the brushed metal that encases the centre air vents and dashboard trim panels is late-’60s S-class. Even the front seats – perforated on models with seat-cooling – look traditional Benz, and they’re superbly comfortable.

Gone is the stunted squab and lack of seat-base support of the old E. The top W212 seats get not only the electric under-thigh roller-extender from the S-class, but also its myriad of seat-adjustment functions, now located on a panel beside the centre console instead of inside the S’s centre screen.

Even the driving position is near- perfect, and Mercedes claims that, unlike before, this will apply to right-hook cars, too. The “right-hand-drive mafia”, as Mercedes-Benz Australia/Pacific President and CEO Wolfgang Schrempp described it, consisting of himself and his compatriots from South Africa and Japan, lobbied Benz HQ hard for a superior conversion, and they got it. For the first time, right-hand-drive E’s won’t have a steering wheel out of alignment with the seat. Let’s hope they’re telling the truth.

The new E-class’s busy styling has raised a few eyebrows, but the best is obviously still to come (the E63 AMG, due early-2010 in Oz), and you can’t argue with its efficiency. Despite growing in every key dimension except height (it’s 18mm lower) and being 30-percent stiffer, the new E500 weighs just 45kg more than the old model, and its 0.25Cd sets a new world record for a sedan.

But the proof of this car’s excellence is in the driving. And it’s the E500 that impresses most. It’s drivetrain is a direct carry-over, all slick gearshifting and subtle V8 burbling, but the combination of its mechanical smoothness with standard-setting refinement and the updated Airmatic suspension’s improved body control and brilliant ride (even in Sport mode) is one of greatness. Add crisp steering and fine balance and it’s hard not to feel superior in the new E.