The IAA is not a performance car, but this one-off vision of the future is so significant we figured the chance to drive it was justification for relaxing our hi-po stance for a moment.

So what is it? IAA stands for Intelligent Aerodynamic Automobile, so it’s a master of active-aero efficiency and world-beating low drag, as well as a precursor to an in-car ergonomic revolution.

The drivetrain may come straight out of a C350e plug-in hybrid, and the chassis is a parts-bin compilation, but the spectacular CAD/CAM-generated body, which has virtually been milled from solid, makes a multi-million dollar styling statement. In contrast to the exotic exterior, the cabin layout first follows function, then fashion. The comfortable low-mounted seats are fully adjustable via trademark in-door controls, the trackpad on the transmission tunnel is another familiar feature, and one nudge on the stalk-operated shifter gets us going; slowly, silently, safely.

The brightness and airiness of the cabin is intensified by the white leather upholstery, the brushed matte aluminium dashboard and the double-bubble glass roof. As we accelerate, the car moves from EV to hybrid mode, with the 2.0-litre turbo four and the e-motor jointly summoning up to 205kW and 600Nm.

Moments later, when road speed reaches 80km/h, the car transitions from ‘Design’ mode to ‘Aerodynamic’ mode, which locks all drag-cutting elements into place. This shape-changing technique is called morphing design. Its most spectacular function is the extension of the Kammback rear end which uses eight segments to ‘grow’ by up to 390mm in length, thereby emphasising the car’s aerodynamically ideal ‘drop’ shape.

In the front, two lateral flaps swing out to direct the air past the wheelhouses and along the flanks. Also part of the concerted action is an adjustable horizontal deflector, which alters its angle to smooth the underbody air flow. An adaptive wheel design uses five spring-loaded metal elements to change the shape from 55mm dished to flush.

The main virtue of the magic morphing motion is a staggeringly low drag coefficient of 0.19, allegedly a new world record for a fully functional four-door sedan. That’s six points better than when in ‘Design’ mode, and yet Mercedes claims there are no inherent downsides like less downforce, greater susceptibility to crosswinds, or directional instability. 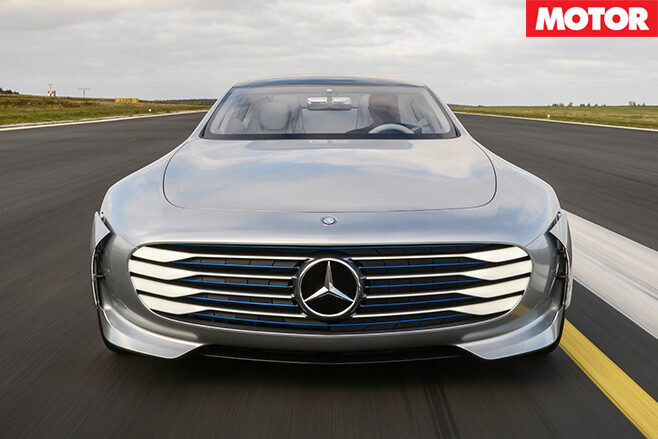 In addition, the low-drag stance reduces the CO2 emissions from 31 to 28g/km while extending the zero-emission range from 62 to 66km.

It’s graphic evidence of how drag reduction will be key to increased efficiency. Yet much of the tech is a long way from being production ready, not least due to regulatory hurdles involved with moveable body parts and no exterior mirrors.