It seems like we’ve been talking about Nissan’s R35 GT-R for a long time. A very, very long time, in fact.

Consider that the first concept car appeared way back at the 2001 Tokyo Show, and that its R36 replacement isn’t expected until 2020 (at best – it may well push out to 2022), and Nissan’s fire-breathing poster child will be well clear of the moody adolescent years and will be able to vote before it gets put out to pasture. And the word around the campfire in Yokohama is that the R36 – once thought to be on track for a 2017 launch – is still at least four years away. Despite a 2020 Gran Turismo Vision Concept showing up last October at the Tokyo Show supposedly pointing the way towards it, and much talk of a high-performance hybrid powertrain gleaned from learnings around Nissan’s ultimately fruitless Le Mans program of 2015, the R36 is nowhere to be seen on future product plans, according to senior Nissan officials.

So here we are in 2016, and instead of checking out an all-new version of a car that utterly annihilated the affordable performance bar, Nissan is instead giving us what it calls the R35’s biggest and most transformative facelift yet.

It’s one of the trademarks of the R35’s life cycle, and the source of the occasional titter behind the hand when the annual press release dropped; “Oh look! Nissan has reprofiled the bolt heads on the R35’s radiator support bar!” we’d chortle. A myriad of minute tweaks over the years, however, has led us to this moment, where the R35 looks to have at long last found the elusive balance between raw firepower and real-world finesse; more GT/R than GT-R, in other words. 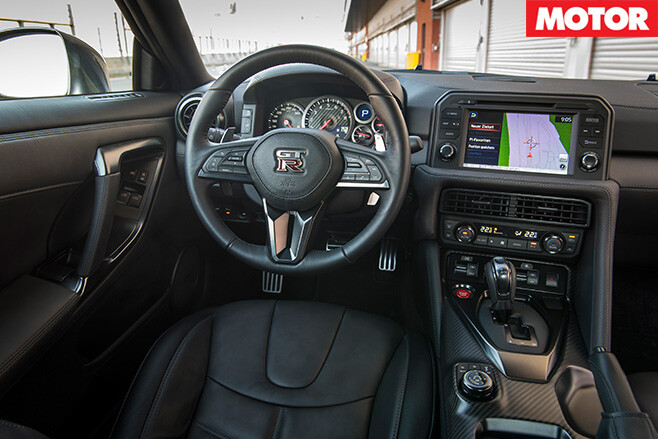 The latest modifications incorporate  a long-overdue cabin update that includes newly-designed seats, a redesigned dashboard and infotainment system, along with a significant simplification of the in-cabin switchgear. Nissan has ditched 16 switches in total, reducing the number to just 11, while a larger, more legible 8.0-inch screen is fitted with genuine alloy dials.

An exterior design refresh that comprises new bumpers, a new grille and bonnet, deeper side sills and a new rear diffuser has also been added to the new GT-R, which still doesn’t move the car a million miles from its original, brutally purposeful looks. The rear bumper was plucked from the GT-R NISMO; all the better to route airflow and exhaust gases with, my dear. The aerodynamic tweaks are also said to increase cooling and downforce without adding drag.

A structural redesign has stiffened the bodyshell around the widscreen, the  A and C-pillars in particular, while a suspension update includes stiffer mountings, lighter Y-spoke Rays 20-inch wheels and revalved Bilstein adaptive dampers. 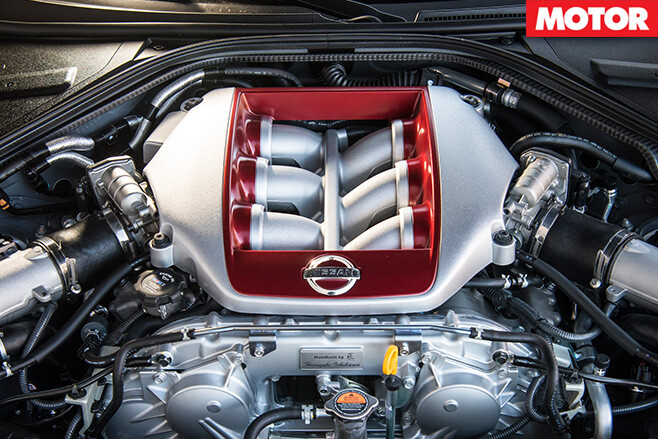 Revisions to the potent VR38DETT twin-turbo 3.8-litre V6 add extra boost pressure and a new ignition timing system poached from the NISMO that controls fuel for each individual cylinder. A new titanium exhaust system too, complete with matching Ti backboxes, is cooled via a duct in the rear floor, and is said to be quieter at low speeds. Power rises to 419kW (from 405kW) and there’s a more marginal (4Nm) increase in torque to 632Nm.

The car will arrive in Australia in September with a choice of two trim levels: Premium Edition and the awkwardly named Track Edition Tuned by NISMO. The latter tops the regular model line-up and gets its own wheels, tyres and trick damper tune.

The improvements to the cabin ambience are quite striking. Most of the cheaper-looking plastics and fiddly switches have been banished, with a slimmer-bossed steering wheel, leather-wrapped upper fascia and carbon fibre-clad transmission tunnel now giving an impression of quality and luxury that has thus far been missing. The infotainment system, although a small improvement on what went before, remains quite blocky to look at and can be slow to respond, but you can now use an alloy rotary knob to marshal its functions, which is a welcome alternative to jabbing at the touchscreen.

Refinement has increased, too. The dual-clutch automatic transaxle gearbox is almost unrecognisable from the clunky, shunting six-speeder that the R35 came with originally. It juggles ratios smoothly and quietly on part-throttle and at low speeds, although it slurs a bit when you’re pressing on. Cabin noise has been reduced and ride comfort improved, so the GT-R can now cover big distances without taking such a toll on your senses.

The extra 14kW doesn’t, according to Nissan, make the car any quicker  to 100km/h from rest – but as part of a curious new gentlemen’s agreement with fellow Japanese manufacturers, Nissan no longer quotes an official 0-100km/h time. Fortunately, our test route afforded the chance of a momentary bit of performance benchmarking using satellite timing gear that we, er, just happened to have on hand. 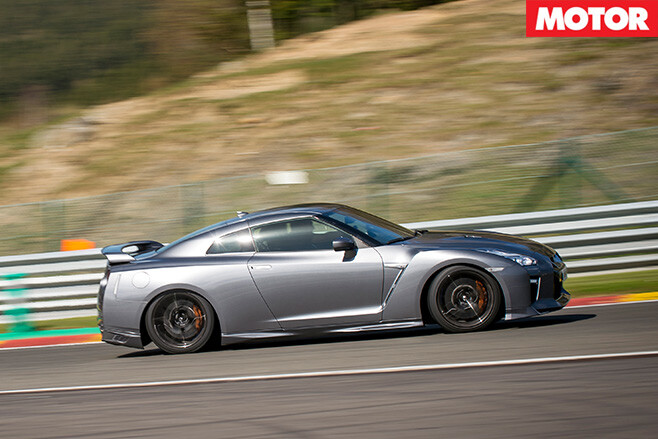 On an apparently level and averagely well-surfaced stretch of road, the car hit 100km/h in 3.3sec and 160km/h in 7.6sec, statistics that place it narrowly behind the current super-sports car crop and well ahead of the machines it directly competes with at that mid-to-high hundreds price point. It’s still not as fast as the figures previously touted by Nissan that have always looked good on paper but have been somewhat harder to achieve in the real world.

What really stops the GT-R from running with the Audi R8 V10 and new Porsche 911 Turbo is its heft – all 1752kg of it. The car feels potent where it can be given its head, but it no longer feels quite like it belongs in the big performance leagues redefined by the likes of the Ferrari 488 GTB and McLaren 570S. The Nissan’s giant-killing days would seem to be over – or at least on hold.

Weight also continues to limit its handling appeal, although the GT-R still has a trick or two up its sleeve. Feelsome, direct and accurate, the newly recalibrated steering draws you into the driving experience by your fingertips, while the stiffer chassis continues to produce the same prodigious lateral grip and awesome traction that have made the GT-R so famous for so long. 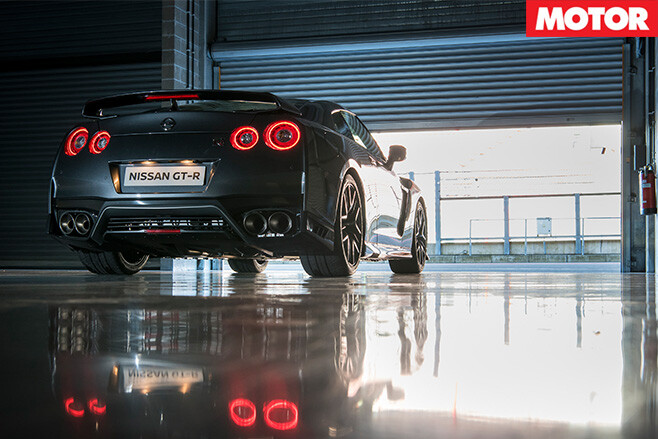 As well as remarkably flat body control for something so heavy, the Bilstein-based suspension conjures a much more settled ride over hard-charged bumps than it used to, and the all-wheel drive system remains sufficiently rear-biased to allow you to adopt a neutral cornering attitude under power that feels poised and adjustable.

Beyond gentle initial slip angles, the GT-R’s limit handling character remains something to be explored with circumspection, though. When grip levels are breached, they drop away quite suddenly and the rear of the big car picks up momentum disconcertingly quickly. Keeping the car on line as the driveline shuffles power away from the rear axle can feel like an exercise more of luck than judgement – and if your luck runs out, you’d best hope it runs out somewhere there’s a lot of runoff.

So it’s clearly somewhat long in the tooth, it’s still rough around the edges and it could still do with losing a few pounds. And yet the facelifted GT-R remains genuinely, properly fast enough in every sense to shrug off the notion that it’s in any way past it. Those who like its muscle-bound, old-school ‘handle with care’ character won’t object to the lack of dynamic delicacy. At all. They could even be encouraged by it. 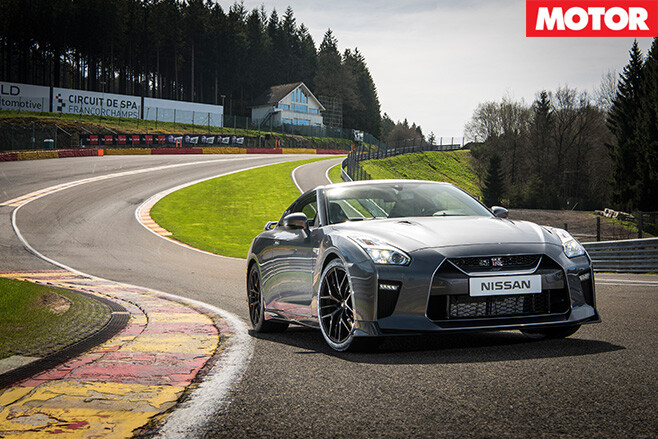 Moreover, a fiercely loyal customer base should continue to be motivated by a bang-for-buck argument that, if not as sensational as it once was, continues to earn the car we once knew as the Skyline a place among the fastest and most exciting new models that a remotely realistic amount of money can buy.

Giant-killer or not, the GT-R continues to pack a mighty punch. It’s also mellowing nicely with age. 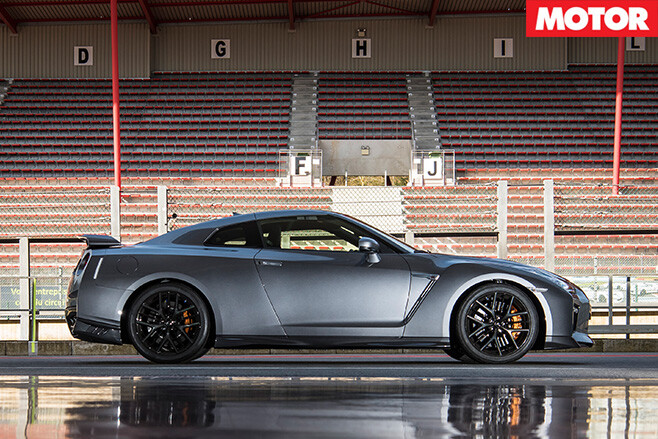 1. OPTIMISTIC
Nissan’s power figures are quoted using Japanese 100RON fuel, so the 419kW/632Nm outputs might be dulled, albeit slightly, with Aussie-spec 98RON.

2. FLAPPY-TABS
In a positive move, the shift paddles for the six-speed dual-clutch transaxle now move with the steering wheel rather than staying fixed to the column. Well done Nissan.

3. STRONG, SILENT
Engaging ‘Exhaust Sound Control’ before starting the engine  closes an electronic valve in the exhaust for a neighbour- and EPA-pleasing 10dB exhaust noise reduction.

4. STIFF BALANCE
Changes in rigidity of the MY17 GT-R not only improve suspension response, but extra stiffening around the boot has improved the chassis stiffness balance, front to rear.

5. ON AND OFF
Active Noise Cancellation matches and cancels some sound, then Active Sound Enhancement pipes exhaust noise back into the cabin via the stereo’s speakers.