What is the Nissan Navara N-Trek?

Officially, it’s the most expensive Navara you can buy. At $58,950 for the seven-speed auto (or $56,450 for the six-speed manual), the N-Trek joins the Navara range as an all-new flagship variant, positioned above the existing (and recently updated) RX, SL, ST and ST-X model grades. Mechanically it’s identical to the rest of the Navara range, with the N-Trek instead offering a host of visual enhancements for a tougher look and feel. 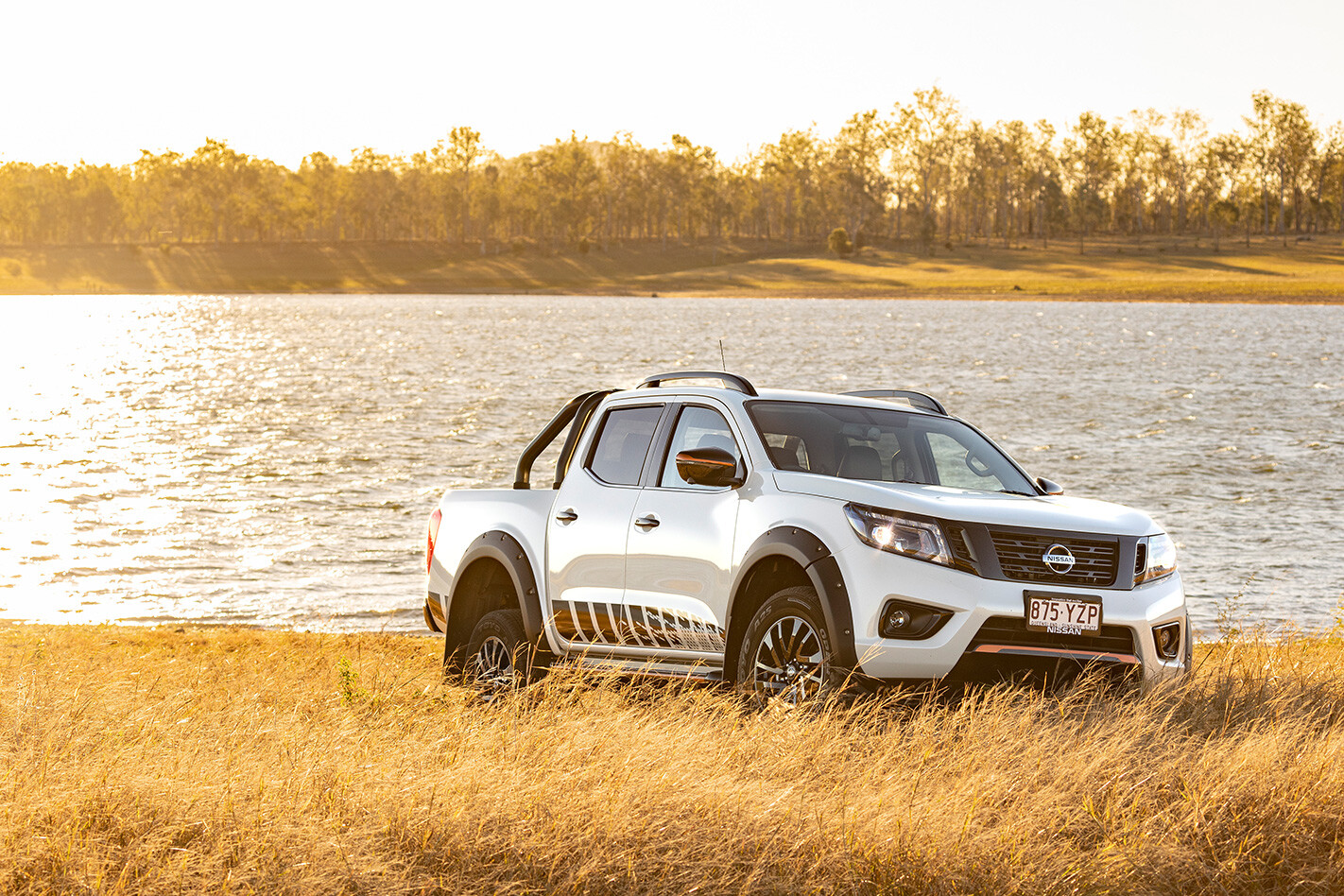 To see if the N-Trek’s visual spice and improved infotainment can elevate the Navara’s fortunes. Despite being Nissan’s third best-seller (after X-Trail and Qashqai), it’s consistently outsold and outperformed by rivals like the Toyota Hilux, Mitsubishi Triton and Ford Ranger. And in our most recent ute megatest (August, 2018), the Navara could only manage a lowly eighth out of 10. No pressure, then… 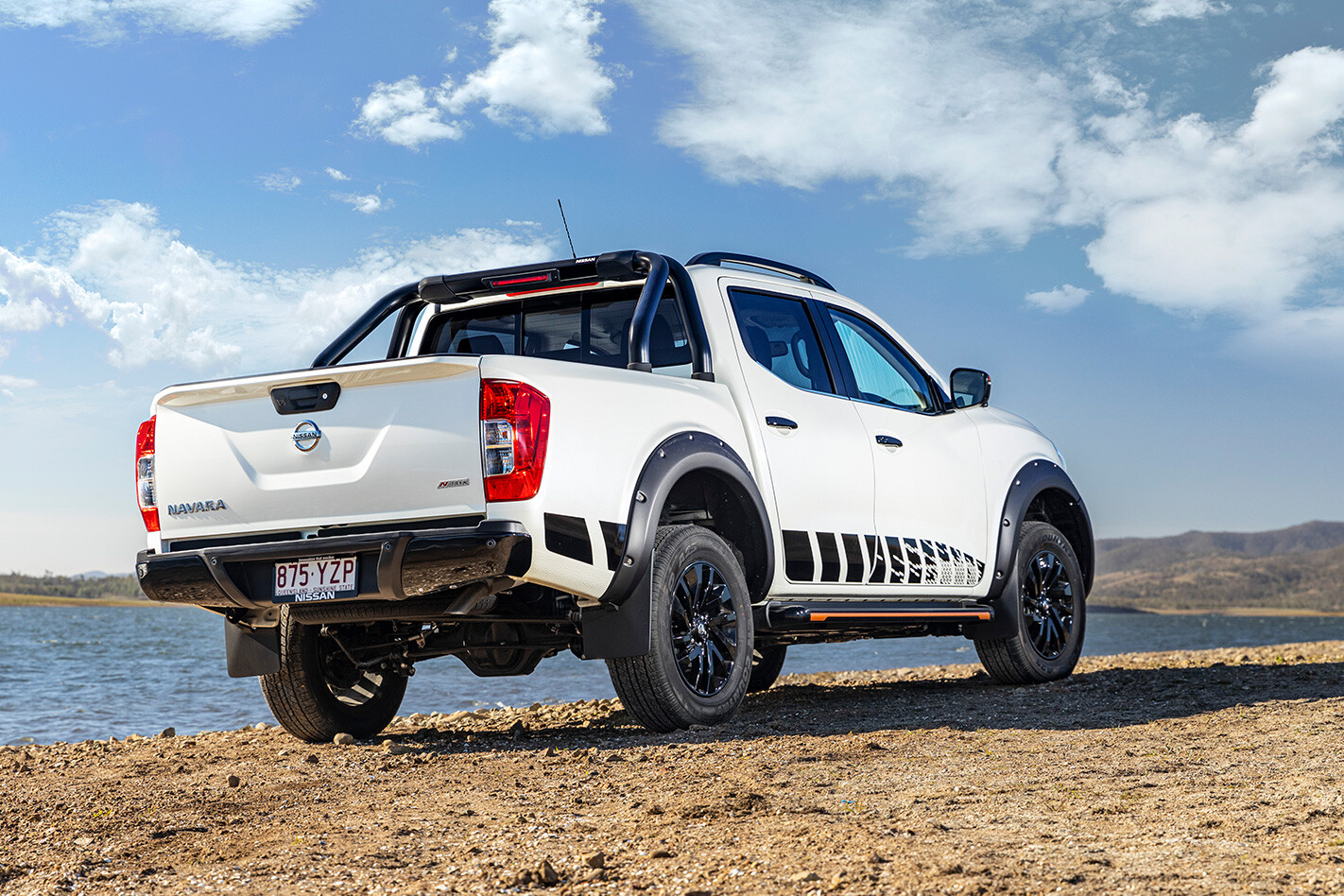 THIS is familiar ground for Nissan. After the runaway success of its limited-run Navara N-Sport and Black Editions, the Japanese brand is back at it with a new special edition variant, this time dubbed ‘N-Trek’. Like the others, the N-Trek brings a host of visual and equipment enhancements, but unlike the others, which were built in limited numbers, this is a permanent addition to the range. Positioned as a new flagship, the N-Trek sits above the existing RX, SL, ST and ST-X model grades and is priced accordingly at $58,950 for the auto and $56,450 for the six-speed manual. 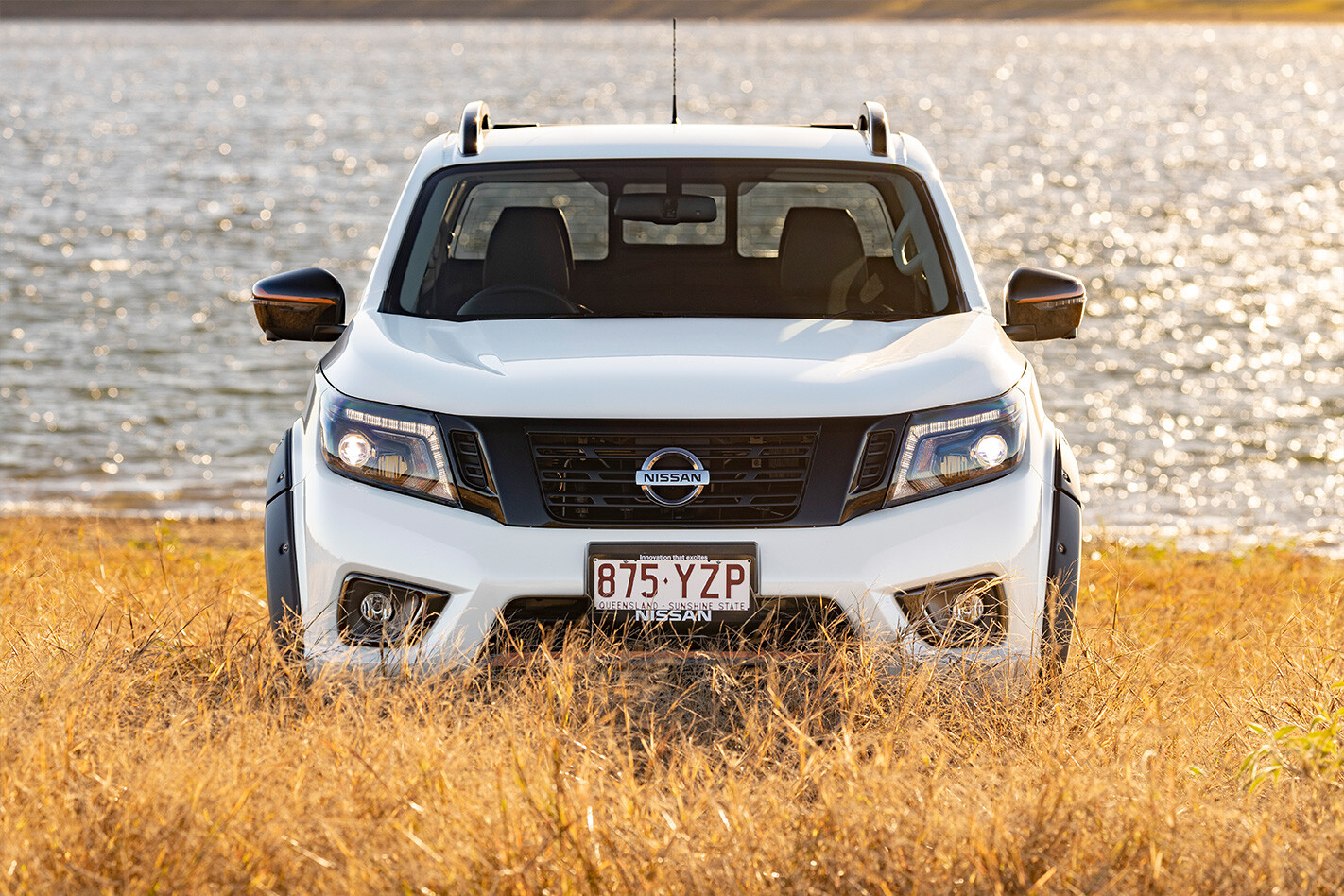 That’s $3700 more than an equivalent ST-X, so what are you getting for your additional outlay? Well, lots of black. N-Trek variants score black 18-inch alloys, black bolt-on wheel arches, black decals that adorn the doors like giant tribal tattoos, black mirrors, and a sportsbar finished in, you guessed it, black. There are three exterior colours to choose from: grey, white and… yeah. Inside, you get the regular Navara’s $1500 leather seat option as standard (which adds leather accented trim, eight-way power adjustment for the driver, and a heater function), plus the added bonus of orange cushion inserts and stitching. One notable exclusion, however, is the inability to fit your N-Trek with a sunroof, which is an option you can tick on an ST-X for $1000. 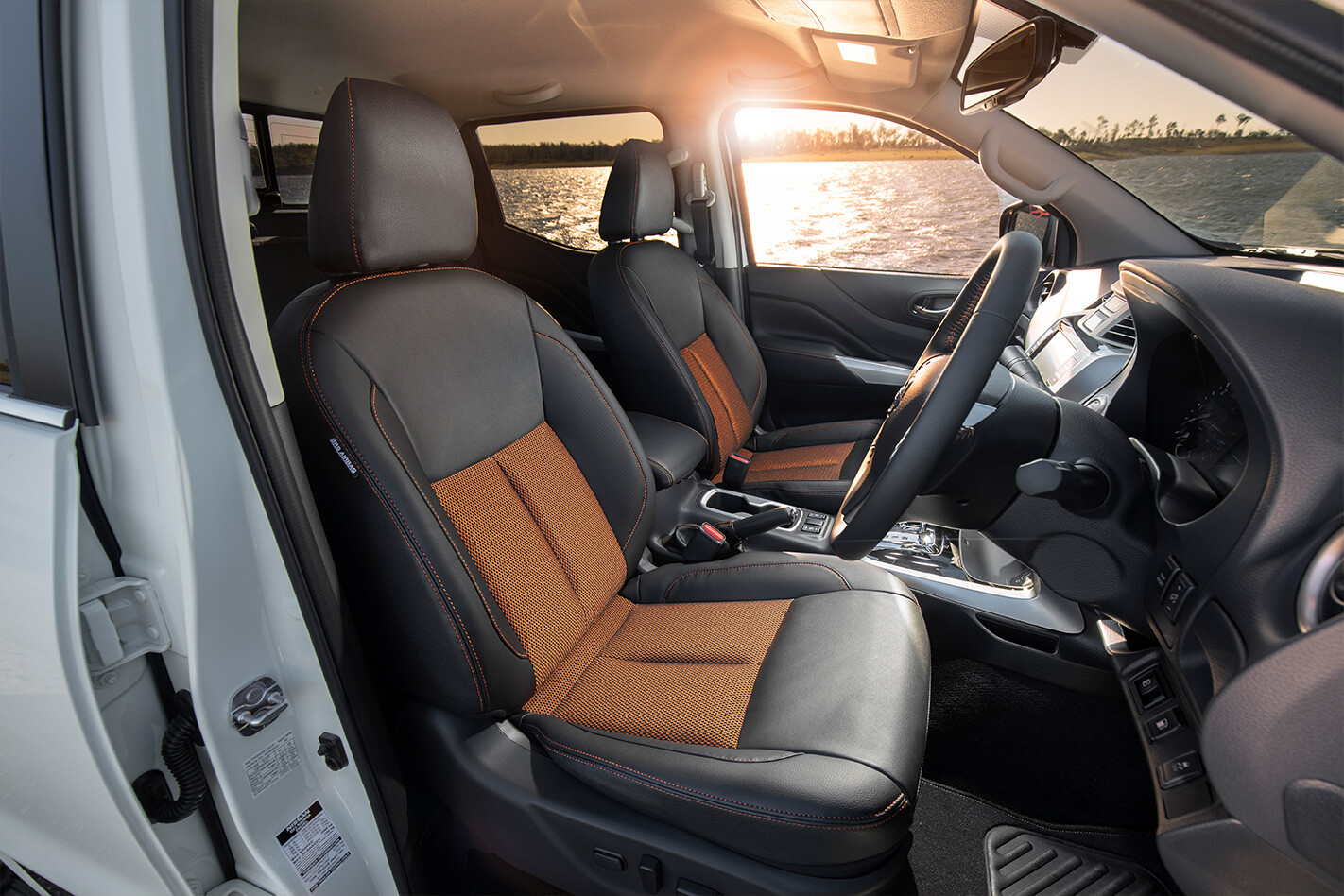 Like the rest of the recently updated Navara range, the N-Trek benefits from a much-needed infotainment upgrade which brings a larger 8.0-inch central touchscreen (ST grades and above) and Android Auto/Apple CarPlay connectivity. It’s a logical and easy-to-use system with clear graphics and a responsive touch-screen. The rest of the cabin is similarly fuss free. Plentiful storage, rear-seat air vents, twin 12V sockets, a powered sliding window in the rear screen, and a superb 360 degree camera are all positives, though no steering wheel reach adjustment and storage cubbies lined with hard, slippery plastics are notable niggles. There are also some notable safety omissions. While every Navara scores a five star ANCAP rating and is equipped with seven airbags, there’s still no autonomous emergency braking or any of the additional active safety gear now available in some rivals like lane-keep assist and adaptive cruise control. Mechanically, the N-Trek is identical to the rest of the Navara range, meaning power comes from Nissan’s venerable 2.3-litre twin-turbo diesel. It’s a gutsy (if slightly noisy) unit that revs freely and, when paired with the slick-shifting seven-speed auto, delivers strong off-the-line acceleration. Overtaking performance is also amongst the best in class, as is its efficiency, with our testing seeing a relatively frugal 9.0L/100km (the official claim for the combined cycle is 7.0L/100km). 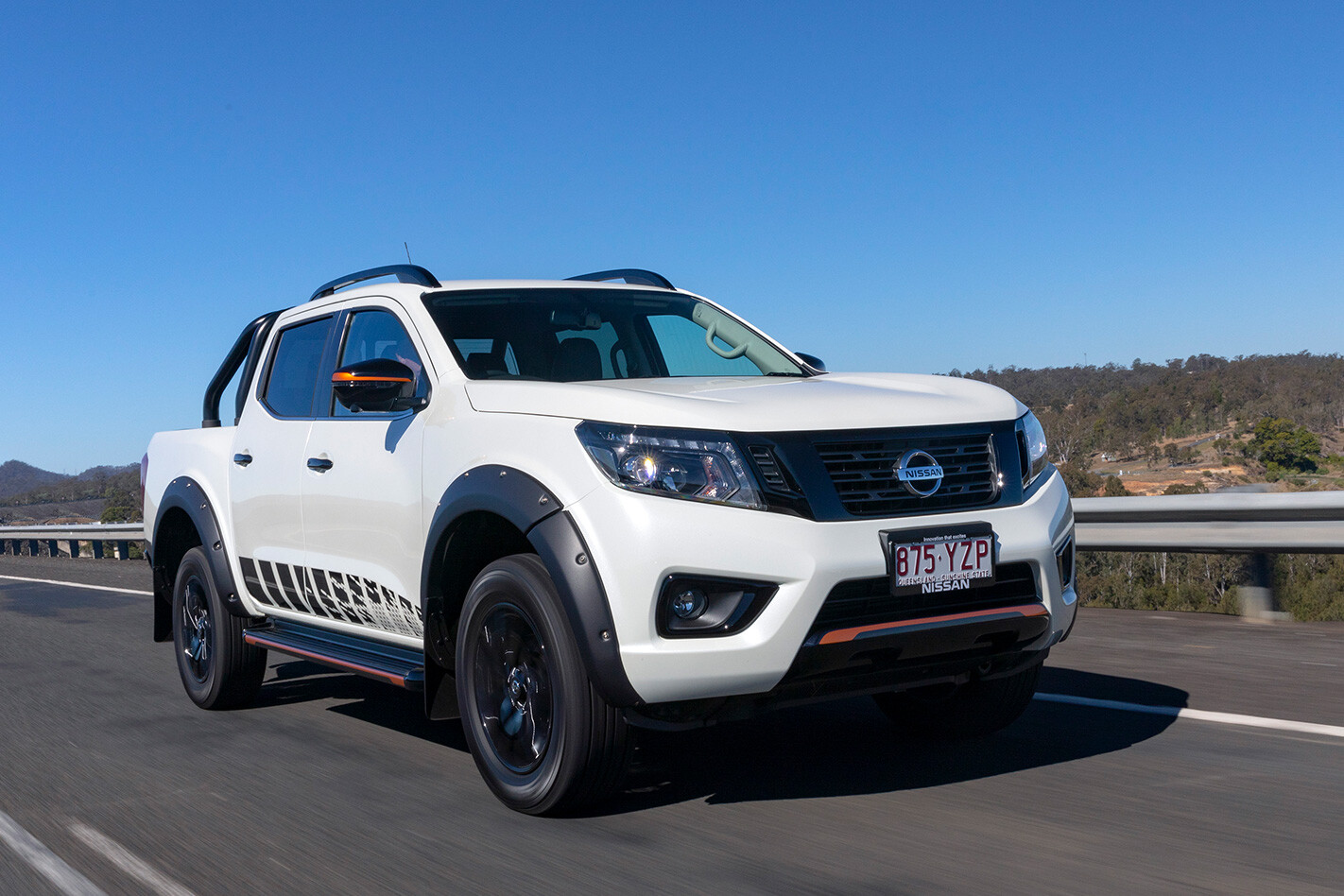 Where things start to unravel slightly, however, is when it comes to on-road dynamics and comfort. Like other Navaras, the N-Trek is fitted with Nissan’s unique coil-spring rear suspension which sees it stand alone in a sea of leaf-sprung rivals (except the Navara-based Mercedes-Benz X-Class, of course). Nissan has worked hard to refine the set-up through several revisions to the spring and damper rates, though it’s still something of an Achilles heel. While pleasingly comfortable at low speed, the ride deteriorates on rough roads where bumps and thumps can jar inside the cabin. Some body roll and occasional chassis shimmying amplify the issue, which sadly, is something of a double-edged sword. Not only does the Navara fail to capitalise on the potential comfort benefits of its more sophisticated set-up, but as our sister title 4X4 Australia found, its multi-link rear end doesn’t have the same travel as leaf-sprung rivals, which can limit its ability off-road - though it remains capable on moderate four-wheel-drive tracks. And it's a dependable workhorse. Towing capacity is rated at 3500kg for trailers with brakes (750kg for trailer without) and the N-Trek’s tub is lined with durable plastic that extends to the top of the tailgate which is useful for carrying longer loads. There are also four tie-down points, another 12V socket, and four additional mounting points that can move along rails built into the side of the tray. 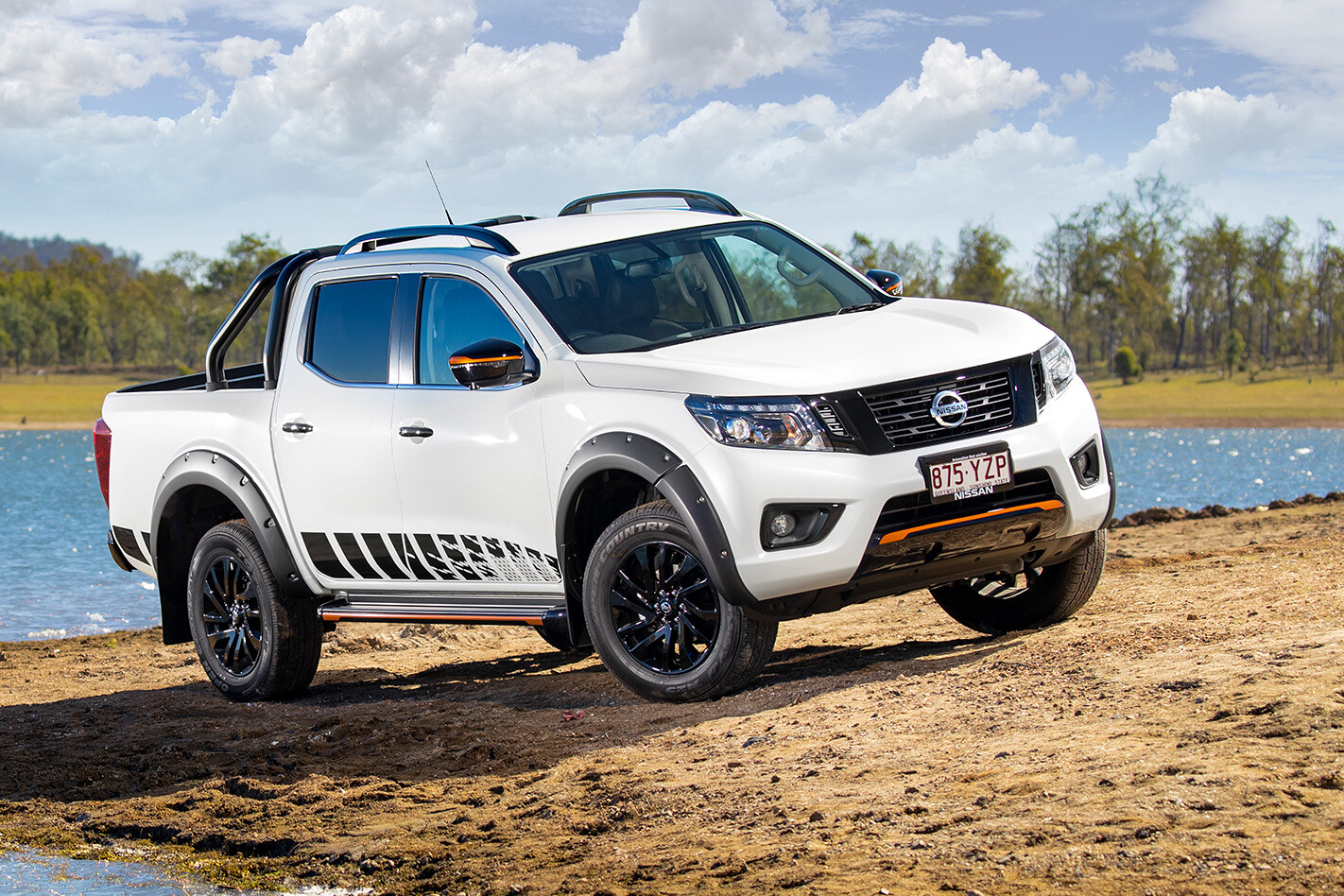 Which leaves us with something of a vexing conclusion. While the N-Trek delivers on its promise of adding some visual oomph to the Navara range, it can’t shake the recurring foibles that continue to plague Nissan’s dual-cab. There are also some question marks around value. If you can live without the flared guards and decals, a correctly specced ST-X can deliver a similar package for less, with change left over for a sunroof. But as Nissan will attest, visual spice and aggression carry great currency in the land of the dual-cab. However, if Nissan is serious about elevating the Navara from class-middling to stand out performer, then more is needed.