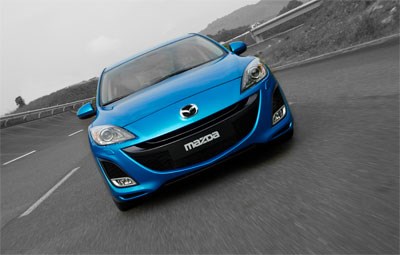 The gaping grille is the first indication that Mazda's tighter, punchier new SP25 has an even healthier appetite for performance.


At the time, the new 3 was literally too new for road rego and too secret to be out in public. In fact, this local preview involved a lone SP25 which was temporarily diverted from its ADR homologation audit.

To best demonstrate the newcomer's changes and improvements, Mazda also fielded an equivalent SP23 from the outgoing model range; in very welcome contrast to most makers who religiously shun such new-versus-old close encounters.

Since our original Los Angeles-based new-3 preview (January '09), Mazda Australia persuaded its parent to fast-track the production of Oz-bound 3s, enabling the local launch to be pulled forward more than a month, to April. Important that, to avoid an unprofitably thin overlap between the coming and going models. The 3 range, remember, accounts for a third of Mazda's sales. Hence, its high priority.

Other post-LA news includes affirmations that the new range will replicate the earlier line-up with Neo, Maxx, Maxx Sport and SP sedans and hatches, albeit with upgraded equipment/feature levels. Unlike the five-speed Americans, our 2.0-litre manuals get a six-speed gearbox, as do the SP25 and the 2.2-litre turbo-diesel. Both petrol engines list optional five-speed automatics.

Among the upgradings, all models have traction control and stability control as standard. The Maxx Sport and SP25 also boast integrated in-dash sat-nav and Bluetooth, both firsts for the class. Besides which, the SP25 is also the first Mazda 3 to include a factory sunroof in an upmarket options package.

The SP25 has a little less boot capacity than its siblings, because the floor is raised to clear the premium Bose sound system's large subwoofer which resides within the temporary-type spare wheel.

Although the incoming and previous Mazda 3s share enough visual cues for the family connection to be quite clear in their size, proportions, outline and windows, for example, it's also obvious which is the newer and bolder looking.

However, there's next to no design continuity in the cockpit. The entirely redesigned dash panel has a new centre stack featuring matt gray and silver finishes rather than the previous gloss black, and the particularly graphic instruments are accommodated in two deeply hooded binnacles, replacing the previous three.

The comfortable sports-style front seats have deeper side bolsters to provide more lateral support during the forceful changes of direction that the SP25 encourages on winding roads. As per the outgoing model, leather trim (featured on the preview car) will be bundled
with Bose audio for a Luxury-spec model.

Thumbs up, too, for the multi-function steering wheel with its two-way adjustability and plethora of spoke-mounted controls for the audio, sat-nav, and trip computer/info functions.

Brisk cornering and any other manoeuvrings quickly confirm that the latest electro-hydraulic steering is incrementally improved over its justly lauded predecessor. The helm is consistently well weighted, provides tangible sense of connection with the front wheels and has not an iota of vacancy around straight-ahead. More than ever, steering integrity is one of the pillars of the 3's great driving dynamics.

Of course, the car's stiffened body and judiciously upgraded suspension also contribute to the enhanced handling and roadholding properties. Ride quality has benefitted too, for on most roads the suspension's slight firmness behoves good body control without smacking of discomfort. But while the differences in new-v-old ride quality certainly aren't chalk and cheese on smooth to average surfaces, the gain in body rigidity is plain to hear and feel across gravel's jittery corrugations.

Given an encouraging stir, the SP25 auto's acceleration is wilfully strong and persistent as the engine responds with persuasive zeal. It quickly winds to 5800rpm or so in Drive, or to about 6300rpm when shifted manually.

Manual downshifts are answered almost instantly, far quicker than most conventional autos, regardless of whether you use the floor lever or the newly revised paddles behind the wheel.

A detail change is that where the gear-position display previously numbered every gear selection in each shift mode, it now simply identifies Drive with D, and numbers only the manual selections.

At speed, the SP25 cruises with easy authority. As you'd expect, the engine becomes determinedly busy when pressed, but doesn't turn objectionably gruff or raise its voice uncouthly.

Tyre noise seems a shade more moderate than before, though that impression was subject to the brevity of the track's coarse-chip surface and the different makes of tyres on the two SPs.

The wind-rush born from about 100km/h and above couldn't fairly be called intrusively loud, and grows very little even when you're going 50 percent faster.

Now the only other 'faster' thing we can wish for is the chance for a good long test drive in the real world. 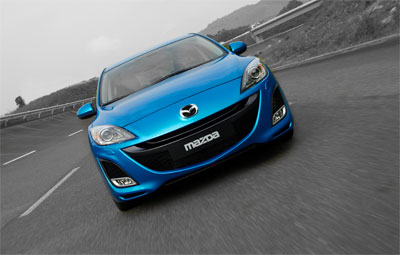 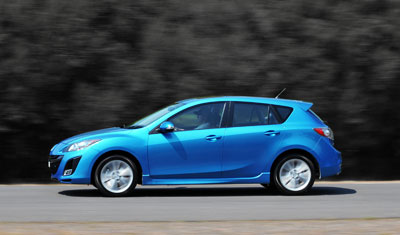 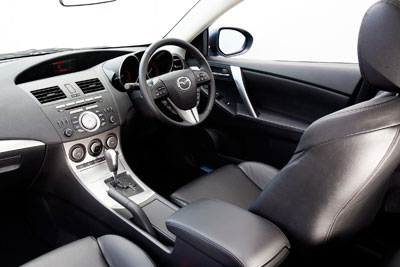 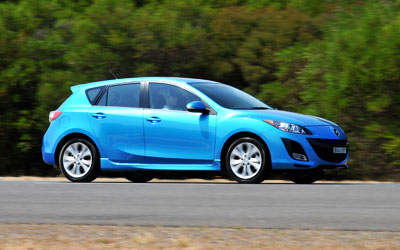