You may have already read a few reviews of Peugeot’s new 308 GTi, but they are almost guaranteed to have been of the fitter, faster 270 variant.

Peugeot doesn’t seem overly keen for people to sample the lesser 250 version – there were none at the international launch, for instance – and that makes us suspicious.

There are other spec differences too, but it’s these missing mechanicals we’re most interested in. Do the omissions leave the 250 feeling a little half-baked, like a superhero stripped of his powers? Not at all. In fact, this is a very entertaining hot hatch, which says that Peugeot has managed to get a lot of the fundamentals right with the new 308 GTi. 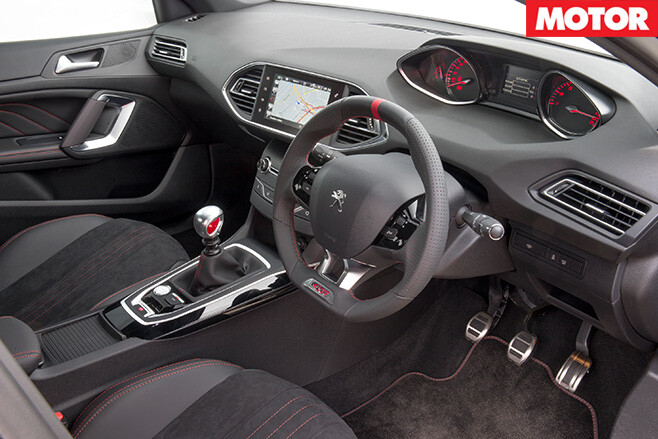 Under the bonnet is a mere 1.6-litre turbo four-cylinder, however you’d never know it such is the strength and muscularity of its delivery. Producing 184kW/330Nm from such a small engine must mean there is some serious boost being developed, however while there is some hesitancy at low revs, the mid-range surge is impressive and it revs beyond the 6000rpm redline with a deep growl that suggests this speaker-enhanced engine note trend might not be so bad after all.

Its cornering capabilities are equally impressive. The smaller brakes feel more than up to the task on the road, there’s plenty of grip and traction is very rarely an issue even without the 270’s limited-slip diff.

It’s a neutral chassis setup, which inspires confidence, with front grip more often than not the first to go at the limit. Unfortunately, what doesn’t inspire confidence is the steering.

Once you’re used to operating Peugeot’s tiny steering wheel it’s well weighted and reasonably accurate, but with lock applied it is very difficult to feel how much grip is left in the front tyres. Subsequently, cornering hard requires a little too much guesswork and you can be left taking two or three bites at each bend. It’s a relatively small blot, however, on what is a surprisingly clean copybook. Its sharp yet understated looks and well-specced, minimalist interior will appeal to buyers who want to be different without being too different, though it’s a shame that this 250 version doesn’t start a little closer to $40,000.

That said, Peugeot has no reason to hide this ‘lesser’ GTi, and now the only suspicion we have left is whether this 308 GTi 250 is good enough to take on that other, German GTI.