Porsche’s turn to turbocharging continues apace with the release of the new 718 Boxster.

The number - pronounced seven-eighteen - pays homage to the iconic mid-engined race car that won everywhere from the Targa Florio to the Nurburgring, and has been revived as the new Boxster, like its famous ancestor, uses just four horizontally opposed cylinders.

Two engines are available, a 257kW/420Nm 2.5-litre for the S and a 220kW/380Nm 2.0-litre for the regular Boxster, both with the option of six-speed manual or seven-speed PDK transmissions. 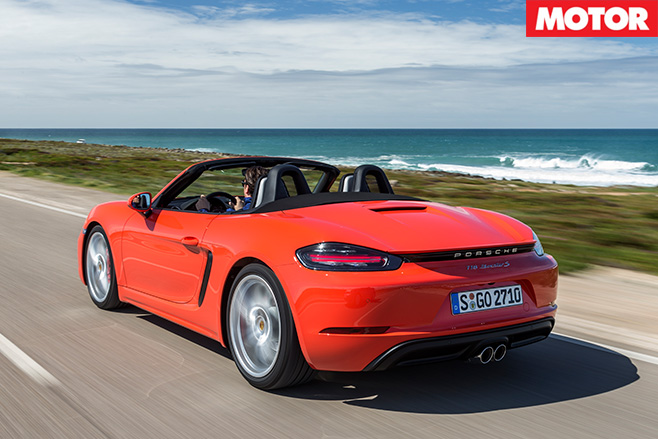 It’s the ultimate Boxster, though its as-tested price would be quite a long way north of the standard S’s $143,400 ask. That in itself is around a $7000 hike, indicative of the Boxster’s new positioning above its hardtop Cayman sibling, which is set to appear later in 2016.

Extra equipment, including Porsche’s latest touchscreen infotainment system, offsets some of that price increase, however there is also a substantial lift in performance, which brings us to the all-important issue of those new turbocharged four-cylinder engines.

This is now a seriously potent sports car in a straight line; based on our acceleration runs on an old Portuguese military runway we’d expect it to match its 0-100km/h claim while crossing the quarter mile in around 12.2sec at about 180km/h. 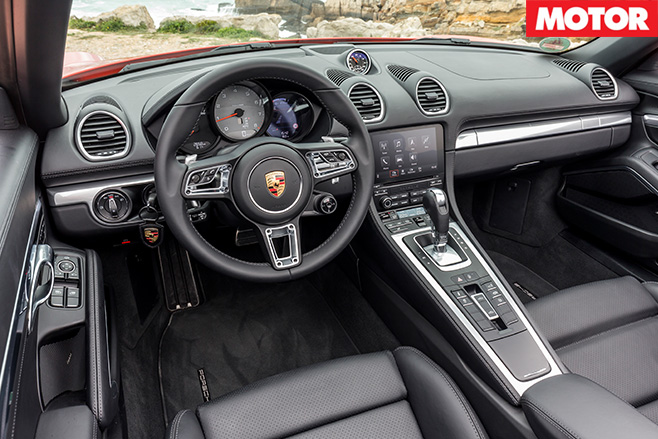 Throttle response is extremely impressive. You really have to be searching for it to uncover any traditional turbocharged hesitation - e.g. large throttle loads at low rpm in a high gear - and it revs cleanly and eagerly to its 7500rpm cutout.

Porsche has worked very hard to replicate the linear power delivery of a naturally-aspirated engine and by and large succeeded. While it doesn’t build to quite the same crescendo, there is just masses more performance all throughout the rev range.

Unfortunately, the soundtrack has suffered quite severely. In the context of similar high-performance four-cylinder rivals it sounds reasonable; there’s a deep growl on start-up, a hint of WRX STI in stop-start traffic and a reasonably accurate impersonation of the VW Golf R’s artificially-enhanced engine note at full noise, but compared to the superb acoustics of the old flat sixes a large portion of the car’s character has been lost. 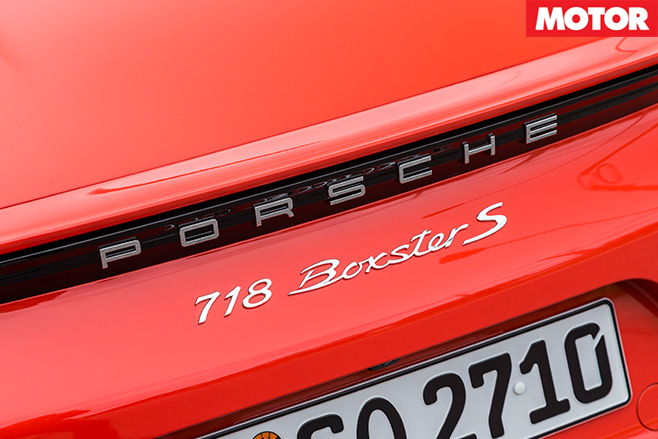 It’s not a bad noise - new Boxster owners might well wonder what all the fuss is about - but it’s difficult to imagine anyone extending this engine for the hell of it. Thankfully, the way the Boxster drives is more than enough to take your mind off any lack of aural delight.

Chassis tweaks have been minor but wide-ranging, headlined by larger brakes, 10 per cent quicker steering, half-inch wider rear wheels, retuned springs and anti-roll bars and PASM being available as an option for the first time.

Thus equipped, the Boxster rides beautifully, firm but with plenty of compliance and so much control it’s difficult to imagine ever needing to engage the much firmer Sport setting on the public road.

The chassis is superb, providing the driver with enormous confidence to push the car right to the limit of its substantial grip levels. Aiding this is the new PSM Sport setting, part of the Sport Chrono option, which slackens the ESP reins beautifully while still keeping a safety net in place. 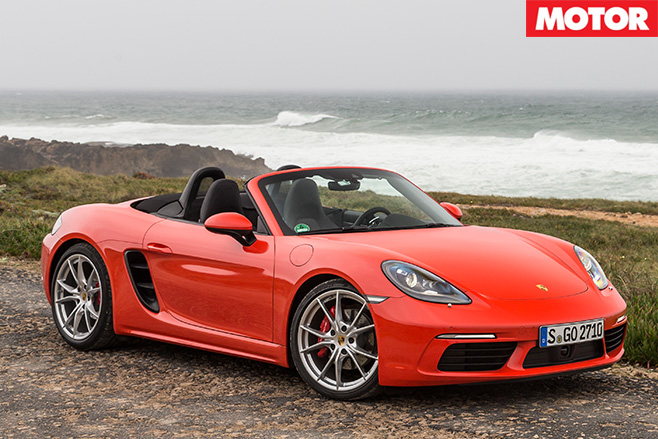 This is especially helpful now the Boxster has the torque to unhook the rear tyres in tight turns, but it’s the way it can be flowed down a road at high speed which is almost unparalleled. And, as ever, it simply laps up hard driving, feeling more impressive and more involving the harder you drive.

The 718 Boxster does nothing to dent the model’s reputation as a sensational sports car, and by all objective measures is a better car than the one it replaces. However, subjective assessment plays a big role in the selection of a sports car, and there’s no doubt losing that spine-tingling soundtrack has dented the Boxster’s ‘want one’ factor.

For some, it’ll be a deal breaker, for others, the added performance will be ample compensation. Whether or not increased exposure will increase our affection for this effective and efficient new powerplant we'll find find out when the 718 Boxster lands in Australia in a couple of months' time. 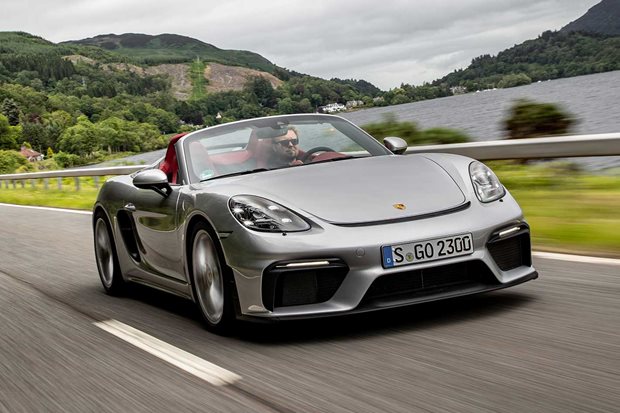 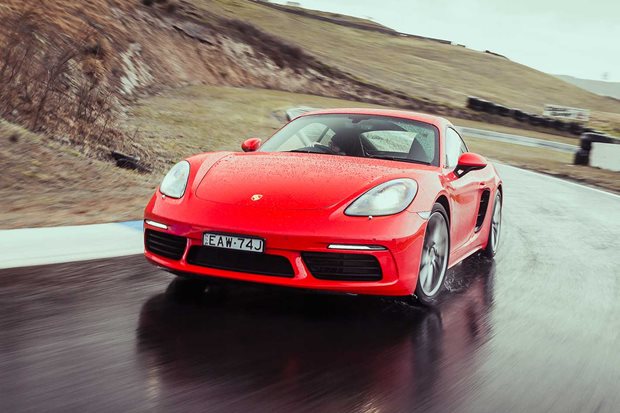 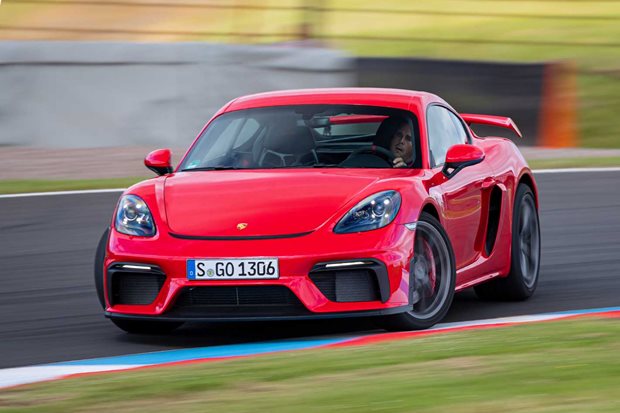 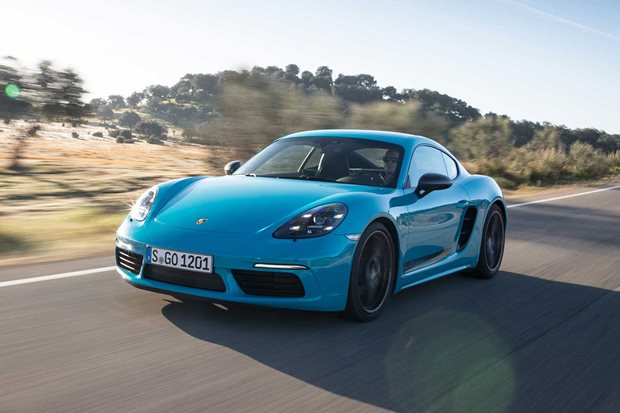 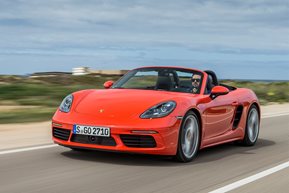