The winds of change are blowing through Stuttgart, and they’re pressurised at 16psi.

That’s the maximum boost pressure of the new 991.2 911 Carrera S, which is the latest, but certainly not the last, of Porsche’s model range to turn to turbos. It’s a contentious move, especially for a model that, despite exploding SUV sales, Porsche still regards as its core business.

Of course, we’ve been here before. The front-engined 928, water cooling, direct injection and electric power steering were all supposed to herald the doom of Porsche’s iconic sports car, but the shift to turbocharging is still significant, partly because high-revving flat-sixes have been a key part of the 911’s appeal since its introduction in 1963, and partly because some of the world’s biggest manufacturers have struggled with the switch to forced induction. AMG and Ferrari seem to have it figured out; BMW’s M Division and Renault Sport, with the Clio at least, still have a way to go.

Both cars benefit from an extra 15kW and, more importantly, 60Nm smeared across the entire rev range, peak torque needing just 1700rpm to arrive versus 5600rpm in the old naturally-aspirated cars.

This extra grunt is put to good use, the new turbo Carrera matching the old S with a claimed 4.2sec 0-100km/h sprint when equipped with PDK and Sport Chrono, while the Carrera S becomes the first ‘regular’ (non GT or Turbo) 911 to dip under the four-second bracket with a 3.9sec claim. 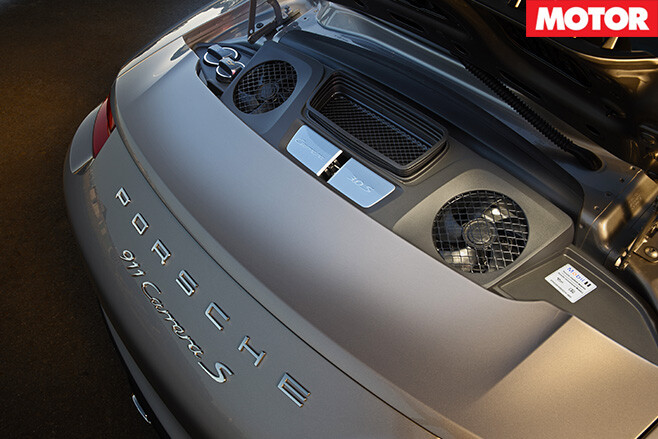 With Porsche notoriously conservative in its acceleration claims, we won’t be surprised if both cars beat these numbers, particularly given the outrageous thrust on offer from this new turbo engine.

The Carrera offers all the performance you could ever need – or, indeed, want – on the open road, while the S is just incredible. Floor the throttle at 2000rpm in second gear, there’s a quick surge as boost arrives and from there it’s an utterly linear progression to the 7500rpm limiter, the only forced induction giveway the sheer volume of acceleration on offer.

The muscularity of the mid-range means you can go a gear higher than before exiting most corners, however there’s still real reward in letting the engine exercise every rpm it has. The difference now is that you don’t need to do so to make extremely quick progress. The engine note has lost some raw aggression, but it still howls like a 911 should and comes with the accompaniment of a sci-fi-like whistle at low rpm as the turbos spool and plenty of pops and bangs on the over-run.

Gearbox choice will be a matter of preference; the seven-speed manual is brilliant, though the self-blip function on downshifts maybe makes things a little too easy, and the seven-speed PDK is the world’s best.

Changes to the 911 chassis are mainly in the details. There’s a little more rubber and adaptive dampers as standard, and either model is capable of face-melting speed in the corners. In fact, reaching the ultimate levels of the Carrera S on the public road is now inadvisable, if not impossible. The steering is unchanged, but the smaller diameter steering wheel effectively quickens its responses and also houses the new dial that switches the car between Normal, Sport, Sport Plus and Individual (select your own settings) modes, as well as the ‘Sport Response’ button (on PDK models) which primes the car for maximum acceleration for 20 seconds.

In almost every other area, however, the 991.2 continues to set the standard. Some may miss the ultimate crispness of the old atmo engine, but the new car still sounds like a 911, drives like a 911 and looks like a 911, it’s just faster and more capable than ever before. The winds of change may be blowing, but the end result is very familiar.