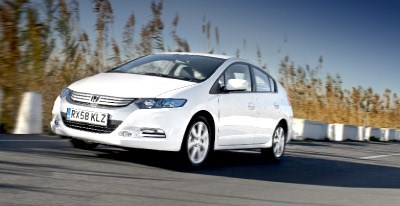 Gen-two of Honda's hybrid won't lure buyers with its driving dynamics, but a $30K price tag and low running costs might have the pull to convert Prius zealots.

Drive the Insight, Honda's new hybrid, and you're constantly reminded how little power it takes to keep a car rolling, once it's been accelerated up to speed.

If less than 5kW is required to keep the aero-slick five-seat hatch moving, its 1.3-litre petrol-burner shuts down. On the energy-flow display in the centre of the Honda's big tachometer, you'll see the filler nozzle icon, which indicates engine running, disappear. What's left is a moving arrow from the battery icon to the car's electric motor. When more than 5kW is needed, say for acceleration or climbing a hill, Insight's four cylinders spark back to life. And the nozzle reappears.

Driving the streets of central Valencia, the Insight regularly goes electric. In the zone between 30 and 60km/h, just so long as the road is flat or a little downhill, 5kW is often all that's needed to keep moving with the bustling morning traffic in this pretty city on Spain's Mediterranean coast.

Electric mode isn't Insight's sole fuel-saving strategy. Stopped at red lights and pedestrian crossings the engine mostly remains silent. It shuts down long before the Honda actually comes to a halt, of course. Like any other hybrid, Insight uses regenerative braking to slow itself. With its motor switched to generator mode, the Honda loses speed but gains a surge of battery charge.

To maximise the amount of energy available for recycling through regenerative braking, the engine's variable cylinder management (VCM) system shuts all of its eight valves. The system is also activated when the Insight is running in electric mode.

If this all sounds super complex, well, it is. And it's not. Honda's IMA - for Integrated Motor Assist - hybrid tech is quite simple - if you just look at the hardware. It's mind-warpingly complicated, however, if you examine the software that runs the system.

While the 1.3-litre engine is related to the same-size four in the base-model Jazz, its head is quite different. There's the VCM hardware, obviously. But it also has half the number of valves (two per cylinder, not four) and double the number of spark plugs (two per cylinder instead of one) compared with a Jazz 1.3-litre engine, changes designed to boost fuel efficiency.

Insight's electric motor, like its engine, is Honda designed and made. Maximum power is 10kW, in short bursts. The reason the Insight uses only half the motor's rated output in electric-only mode is that full power quickly drains the relatively small battery. While the motor's power isn't massive, the way it's delivered is a sweet mesh with the petrol engine.

The motor's 10kW maximum arrives at only 1500rpm. There's no torque curve; it's 78Nm from 0-1000rpm, beyond which a steeply angled decline explains the modest power maximum. In contrast, the petrol engine's 65kW max arrives at 5800rpm, not far beyond its 121Nm torque peak at 4500rpm. Where the engine is weak the motor is strong, and vice versa. To make the most of the electric motor's torque, Insight's CVT runs a lower final-drive ratio than the similar transmission in the current Civic Hybrid.

The unseen hand in command of IMA, its software, has lots to do. Hiroshi Yoneguchi, Insight's chief drivetrain engineer, reveals it took three years to develop.

Despite the efforts of Yoneguchi's team, Insight isn't as refined as the current Prius in city driving. Engine start-up, whether stationary or moving, can sometimes cause a soft thump, felt as much as heard. Clutch engagement and disengagement could also be smoother.

It could be more polished, but in city driving Insight's performance is fine. From rest, where the electric motor does its best work, the car feels quicker than its claimed 0-100km/h time of 12.6 seconds indicates.

There's more than this to like about Insight in town. Visibility is good, even to the rear through that high tail, and the interior environment is pleasing. High-quality plastics and fabrics, flawless assembly; typical Honda. Behind the wheel there's ample room and an adequate seat. The bi-level instrument layout, similar to Civic, works well, and the minor displays and controls are intuitively simple to use. Rear seat headroom is a little tight for anyone over 185cm, and kneeroom can be in short supply for those stuck behind a tall driver, but the cargo compartment (more than 400 litres), will easily accommodate a horde of shopping bags. Thanks to the underfloor location of Insight's battery, the rear seat backrest can be flipped forward. Just like in a normal hatchback. The Honda's low-speed ride can be a little lumpy on rough surfaces, but it generally avoids harshness.

On the highway, it's a different story. Cruising on a flat Spanish autovia in the 100-120km/h zone Insight's low-drag shape cleaves easily and quietly through the air, its engine (which is always working at these speeds) typically spinning at a relatively lazy 2000rpm or so. But ask the Honda to accelerate hard or climb a steep grade and revs quickly head for the 6000rpm redline as the CVT slides to the low end of its ratio range. North of 100km/h there's not a lot of action to accompany the soaring sound levels. There's no way around the problem here. At high revs Insight's electric motor can do nothing to help. It's a 1200kg car, but has only 65kW to work with.

Insight's handling won't surprise (or delight) anyone. Benignly stable (with a standard electronic chassis stability system providing a safety net) and averagely agile, it's safe and sound. The electrically assisted steering is glutinously dead around straight ahead, and only shows signs of life once some lock is wound on.

So the Honda isn't quick, or sharp, or sensual. Those seeking conventional thrills aren't going to be attracted, but this doesn't mean the Insight is without appeal. For the growing proportion of buyers prepared to consider hybrid, the Honda is downright seductive.

It's a matter of numbers.

Insight's official European combined cycle test fuel consumption (4.4 or 4.6L/100km, depending on whether it wears a 15in or 16in wheel and tyre package) is only a little higher than the world's best known (and most bought) hybrid, the second-generation Toyota Prius. Yet the Honda will be significantly more affordable.

Honda Australia is striving for a price tag of around $30,000 for Insight's launch early in 2010, while Toyota knows it will be tough battle to keep the new third-generation Prius (due to launch in July) beneath $40,000.

Honda believes the world wants an affordable hybrid, and on this promise the Insight certainly delivers. While the low cost involves compromises in the areas of performance and drivetrain refinement, there is something addictive about rolling along, propelled by nothing more than a handful of recycled kilowatts. 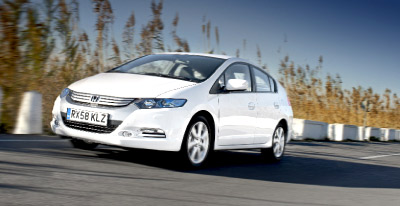 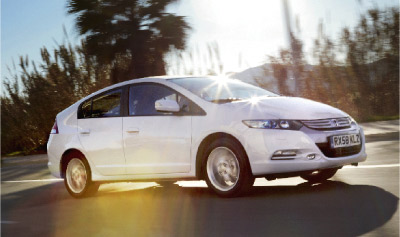 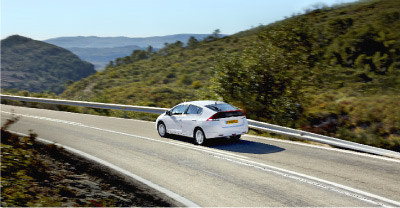 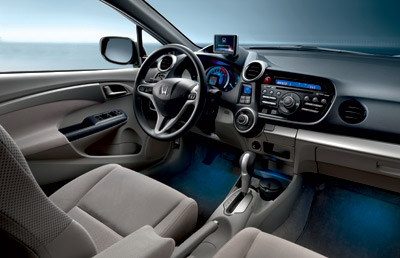