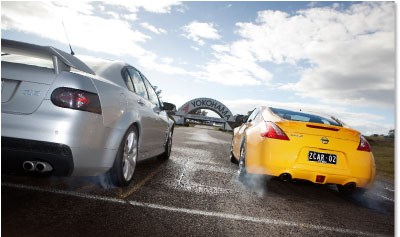 The 6.2-litre V8 gently rocks the HSV Clubsport on its springs, ready to kick big-bore sand in the new face of the lightweight Nissan 370Z. To outsiders, it looks like the Nissan has shown up on the wrong test day. But the Zed is here, facing off against an archetypical Aussie muscle car, because it has in fact outgrown its own sandpit.


Its predecessor, the 350Z, had recorded a best to 100km/h of 5.8 seconds and 13.8 for the standing 400 metres. While avoiding specifics, Nissan's Japanese boffins suggest their new charge is easily quicker, capable of 0-100km/h in sub-5.0sec. Our initial seat-of-the-pants impressions heap scorn on that claim, but, even with just 2000km on the odo, the new 370 certainly feels more urgent.

Like Nissan, HSV optimistically claims a sub-5.0-second 0-100km/h time - 4.96sec to be precise - for its E-Series range of sedans (Clubsport, Senator and GTS). In reality, we've seen everything from 5.2sec in a GTS to 5.7sec in Clubsport.

Though we're expecting this mismatched pair to deliver similar times, it's impossible to ignore their spec differences. The HSV's 317kW represents 23 percent more power than the Zed's 245kW, but at 1812kg, the Clubbie is 19 percent heavier. Bottom line is similar power-to-weight ratios - 175kW per tonne for the HSV and 167kW/tonne for the Zed (just 4.5 percent in favour of the HSV).

Despite fat and grippy 275/35/ZR19 Bridgestone Potenzas tucked under the rear guards, the HSV really needs to be babied off the line. Pop the clutch with anything more than 2500rpm showing on the tacho and it will slew sideways in a howling haze of wheelspin. Best technique is to walk the Clubbie off the line with a stuttering of slip before gently feeding in full throttle.

But the biggest challenge in this HSV is finding the elusive third gear. Several fast runs to 100km/h had to be aborted amid much graunching and profanity.

Getting the Zed off the line is fraught with the same traction difficulties; its rear tyres (245/45R18 Yokohama Advan Sport) are reluctant to take more than 2200rpm off the line. Use lots of revs and the Japanese coupe will mimic the big Aussie with its own smoke show. While more accurate than the recalcitrant Tremec in the R8, the Nissan's gearbox requires huge pressure for a fast shift into second.

Further, the Zed feels a little reluctant to charge past 5500rpm to its 7500rpm redline - perhaps the engine is still tight.

The Clubsport expands its advantage to 400 metres, running a 13.19 pass at a blistering 176km/h; the Zed posts 13.84 at 169km/h. Those six-tenths of one second represent a narrow five percent advantage in favour of the R8, but that's only half the story. Examine the time-to-distance line of the Vbox printout (rather than the time-to-speed) and as the Clubbie crosses the 400-metre mark, the Zed is lagging a full 30 metres - seven car lengths - behind.

In the opening salvo, it's Clubsport 1, daylight second... 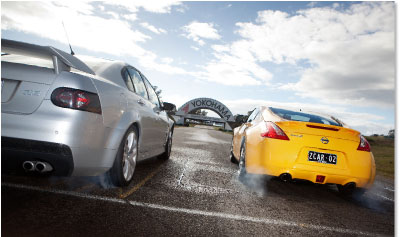 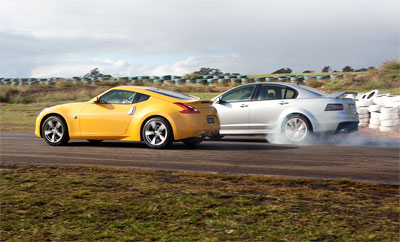