We drive a 300km/h cigar lounge that offers a thunderous V8 ruckus and no apologies.

WHAT IS IT?
Before AMG and Mercedes-Benz were bedfellows, AMG was building a type of go fast or go home E-Class for people with blank cheques and excellent taste. It was dubbed the ‘Hammer’ and the 300CE 6.0 AMG Breitcoupe was the most extreme version. It has a modified V8 engine from the S-Class, flared two-door bodywork and a top speed of more than 300km/h.

WHY ARE WE TESTING IT?
We’re only human. AMG celebrated its 50th birthday at the Nurburgring 24 Hour this year, and brought along a fleet of heritage vehicles to mark the occasion, including a 300CE 6.0 Hammer.

THE WHEELS VERDICT
A hard-hitting tool that epitomises AMG’s big, brash V8 bruisers from the 1980s. The 300CE 6.0 AMG delivers its Hammer blow on all levels with an epic V8 soundtrack, huge grunt and the looks to match. 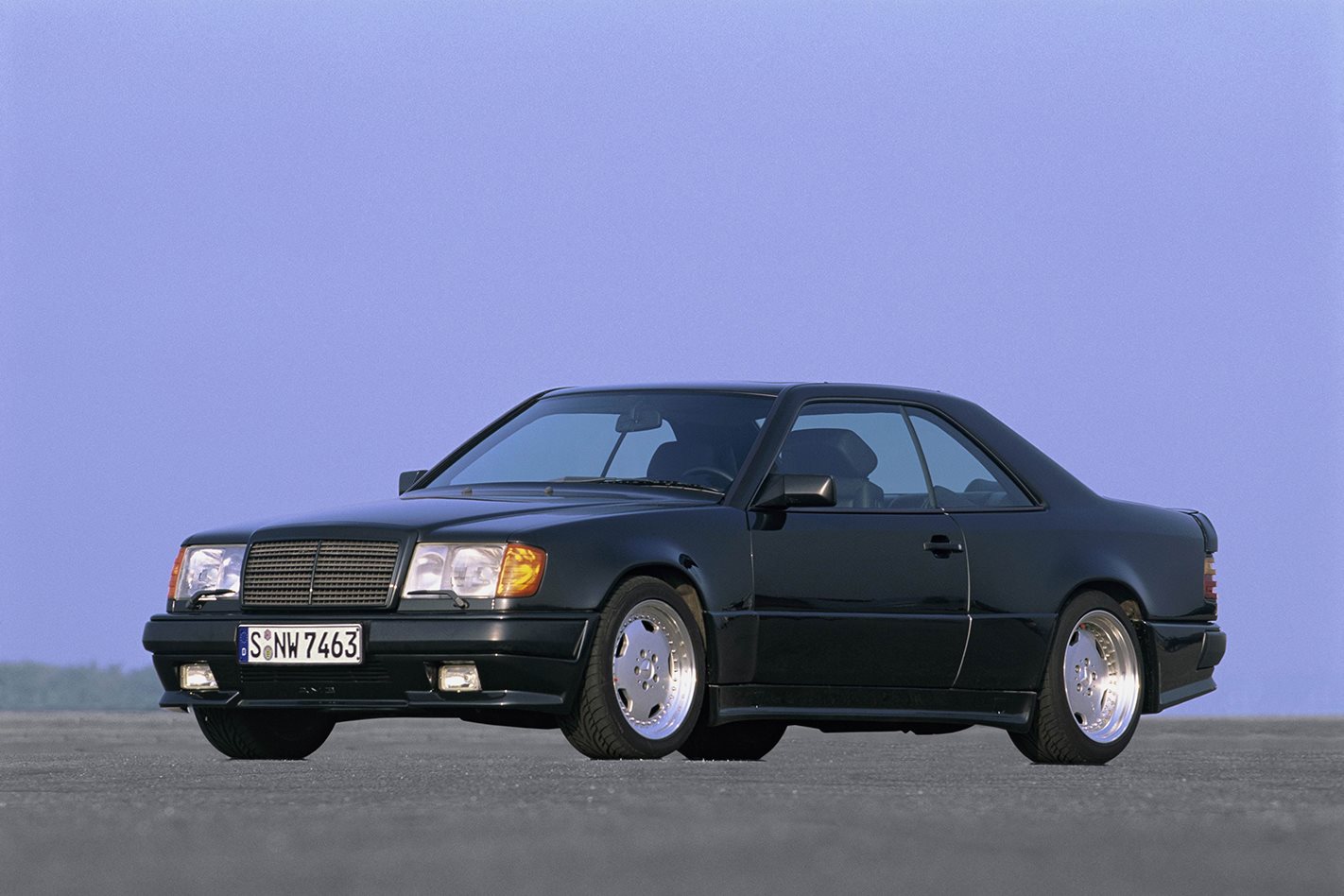 THE WHEELS REVIEW
IN the mid-to-late 1980s, if you reeked of money and wanted an extremely fast way to move four people a long distance, an AMG ‘Hammer’ was the thing to own. No other car before or since has had a more perfectly expressive epithet.

American fans coined the nickname in 1986 when AMG started shoehorning V8s from the W126 S-Class into the smaller W124 300E sedan in either standard 5.0-litre capacity or, if money was no object, bored out to 5.4-litre with twin-cam heads and laughably over-the-top outputs for what was still supposed to be a stately executive saloon.

But AMG’s biggest, bluntest instrument of all went a few steps further. The Mercedes-Benz 300CE 6.0 AMG ‘Breitcoupe’ was a widebody two-door version of the Hammer that stretched the bigger V8 to 6.0-litres and flaunted outputs of 283kW and 566Nm.

It was the ultimate iteration of the formula, and the car that finally gripped the imagination of Mercedes-Benz and lead to the start of an exclusive partnership in 1990 that continues today.

Before that, buying an AMG was different. First you emptied your pockets at a Mercedes-Benz dealership, then you took your brand new car to AMG, piggybank in hand, and selected from a menu of cosmetic and performance upgrades.

AMG was just one aftermarket tuner in a cast of thousands to offer a similar service. Boschert would take your W124 and put gullwing doors on it, Schulz Tuning could turn it into a six-door stretch limo, or SGS could cut the roof off to make it a convertible…

But only AMG would scrap the humdrum factory-fitted 3.0-litre straight-six and replace it with a fettled V8 nicked from the Mercedes-Benz flagship – much to the chagrin of the boys from Stuttgart, who were not completely on board with AMG’s practices at the time. Not a single Mercedes-Benz badge or star was allowed to be seen on the early cars.

AMG customers unbridled by budget could add further visual enhancements like three-piece 17-inch wheels, a ducktail spoiler and AMG exhaust tips. So expensive was it to spec a 300CE with the works that pundits claim as few as 12 widebody 6.0-litre coupes were built by AMG. Their value today is a bit of an unknown. A for sale ad last year put a price tag of €149,500 (A$220,000) on one.

That’s a lot of money for not much more power and torque than a modern Mercedes-AMG A45 (280kW/475Nm), but buying one of those instead would be completely missing the point.

The A45's 2.0-litre four-cylinder just can’t hang with the fearsome V8 bellow of the Hammer, which isn’t as loud or unruly as I’d thought it would be. It’s a low and booming thunder that cracks at the top of its range when free-revving. Drop it into gear and it still feels fast in a straight line.

There's a normal 300CE instrument cluster nestled in the classic wood veneer Mercedes dashboard and it shows redline at 6000rpm, but foot to the floor the Hammer keeps spinning until the needle goes off the end of the dial at a shade over 7000rpm.

That’s followed by a big shunt, from the four-speed automatic through to the standard limited slip diff’ as the primitive drivetrain slams into a higher gear. Kickdown is slow and clunky and it’s obvious transmissions have come a long way since 1988.

Everything else is unexpectedly refined. The Hammer is so easy to drive, and not at all the raucous hot rod experience I’d anticipated from a car pulled apart and rebuilt with so much extra grunt. A slender steering wheel guides the hefty front end. In fact, every control feels weighted and mechanical. Throttle and brakes need determined application, but it is effortlessly smooth as a whole.

There’s something refreshing about driving a car without hundreds of points of adjustment like the individual engine and damper and steering settings found in modern AMGs. The Hammer doesn’t care one bit for your Sport modes or traction control, though it does love an electronic gadget on the inside.

Heavily bolstered Recaro front seats have 19-way adjustment that I can’t make top nor tail of. Lots of old, important looking buttons sit on top of the lower cushioning but nothing is marked. I choose to leave them alone.

The rest of the cabin is pure ‘80s Teutonica and exactly what you would ask for from a 300km/h cigar lounge; thin A-pillars and big glass and the fantastic scent of old leather and high-octane fuel that has muddled together over nearly three decades into a piquant cocktail.

Best of all are the huge window openings on either side of the car when all four glass sections have disappeared into the doors and rear quarters. The coupe doesn’t have a B-pillar, and it’s impossible to resist resting an arm over the side.

The Nurburgring 24 Hour race is happening during all of this, and the streets are full of people waving and cheering at the Hammer as it rumbles past. It’s not the most subtle car, but it takes an enthusiast to know what it really is, and these people who do, adore it. And so do I.