It’s hard to look past the numbers when preparing to drive the Chevrolet Camaro ZL1. In anyone’s book, 477kW and a monstrous 881Nm is a lot of grunt. Match that with a launch-control assisted claim of 3.5 seconds to 100km/h for the 10-speed auto and things are looking even juicier. There’s no doubt that the 6.2-litre V8, in all its whine-inducing supercharged glory, is rapid. And yes, the LT4 does make you all warm and fuzzy, rejoicing in the fact that such a hulking engine still exists.

Thankfully, the rest of the $159,990 package comes to the fore, too. Magnetic Ride Control (MRC) adds a surprising duality to the ZL1, a world where performance and comfort mesh in an unexpectedly amicable marriage. Sadly the tarmac-tearing Goodyear Eagle F1 tyres aren’t fitted; instead the road-biased Continental ContiSport Contact 5P rubber has to suffice. But it’s time to see if on-paper prospects match the real-world reality.

What a car, but more importantly, what an engine! The LT4 is an absolute beast of a thing. Tractable, powerful, and above all engaging. For me, it dominates the experience in the ZL1 in the best of ways. The 10-speed auto feels like it has two too many ratios personally, but it’s a smooth unit, and ensures power is on tap any moment you flex your right foot. Unlike the muscle cars of old, this piece of American iron can handle with the best of the Europeans, with the enormous front treads providing immense grip and feel. Its significant price over a Mustang becomes all the more understandable when you begin to turn up the heat.

My experience with the ZL1 was a little different to the rest of the Wheels team. I was lucky enough to drive it on largely dry, flowing country roads, something the strapping Camaro needs to get any form of meaningful traction despite still being shod with the ‘wrong tyres’. For me, it’s like Chev set out to make a mean, angry American muscle car and accidentally created a GT cruiser with a dynamite engine. Yes, it’s still a beast that needs to be managed in certain situations, but you can tone it down and enjoy the mostly cosseting ride, driving position, surprisingly polished dynamics and endless torque. That’s of course if you can shell out $160k to account for the asking price.

I’m left a little perplexed by the Camaro ZL1. I know deep down that it’s a genuinely focused dynamic proposition, but we’re not seeing the best from it with the tyre it’s running on. Give us a hot day, a dry track and some sticky boots and I reckon it’d all come extremely good. The manual is also an interesting choice with a stubby lever and an old-school muscular action. That banshee engine buys it a whole heap of credit. If you ever thought modern sports cars were sanitised and dull, try this one for size. Check your ego and insurance first though. 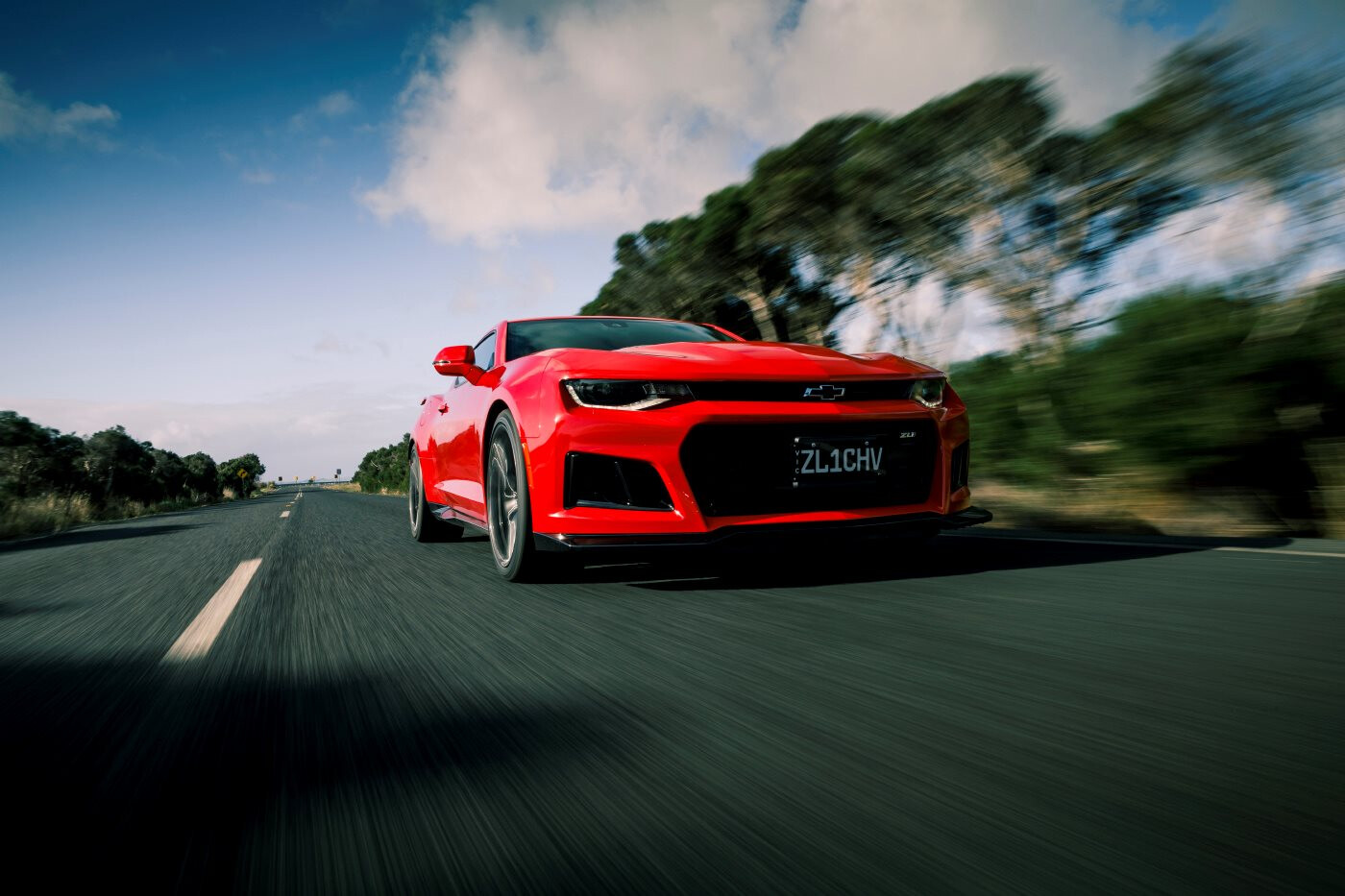 If the road is wet, strap yourself in and be prepared. Unlike most performance cars, you’ll find yourself searching for arrow straight bits. Anything verging on full throttle in the ZL1 will require precise tiller inputs and careful throttle management as the rear Continentals scramble for meaningful purchase. It is equal parts terrifying and fun. It’s also hard to ignore 881 of the finest Newtons – all of them demand attention.

Try the same on dry terra firma and the experience is somewhat more subdued, with the relatively unobtrusive electronic aids curbing acceleration only slightly. In gear, when traction limitations are largely no longer an issue, the LT4 catapults the ZL1 at the horizon at an alarming rate. It’s all about grip versus slip. Get the former and you’ll smile. End up with the latter and you might be in need of an undies pit stop.

The refreshing part of the powertrain is the linearity of the delivery as the 6.2 builds to its 6400rpm crescendo. Trundling around city limits with the terrors of tramlines and pedestrian crossings isn’t a harrowing task. The 10-speed automatic helps here, proving an intuitive partner to the burly V8 in both sedate and aggro situations. The various drive modes also allow for everything from mild to wild. Sadly ADR laws have curtailed the V8’s bark a little, but there’s still enough supercharger theatrics and burble to satisfy any enthusiast.

This is where the ZL1 is a revelation. Despite not being the performance-orientated tread pattern of the Goodyear rubber, there’s still 285-section fronts (yes, that’s right, at the front) to offer ample front-axle grip. While the steering isn’t the last word in feedback, there’s a meaty weight and it’s direct. Hence getting into the apex is easy; exiting it requires managing 477kW/881Nm. It’s an exciting mix, but the revelation is the amount of mid-corner speed you can hold – it’s no point-and-shoot affair. The Brembos also offer meaningful modulation through the left pedal and arrest the speed proficiently.

Magnetic Ride Control accounts for much of the added composure. Wave goodbye to the red mist and turn the dial down from 11 and the ZL1 will, genuinely, offer an unexpected level of long-legged comfort. Yes, NVH could be better suppressed, but the Camaro fails to tramline despite the wide 20-inch wheels and you could feasibly use it on a long trip and not go crazy – there’s even a decent size boot.

For the most part, it’s extremely hard to tell that the ZL1 was ever left-hand drive – HSV brings the Camaro to near OE-spec. The conversion largely escapes tell-tale signs of a previous life apart from the position of the centre console and the cup holders seemingly being on the incorrect side. Those who like the sensation of sitting low will enjoy the hyped-up Camaro’s cabin, a high beltline and rather small glasshouse which accentuate this. However, there’s a feeling of claustrophobia and vision is hampered thanks to the thick pillars. Overall there’s a performance-orientated ambience that doesn’t compromise comfort. You could do long trips in the ZL1 – not just to the track.

Perspective is key with the ZL1. If you enter into the experience looking at the LT4’s raw figures and expect it to dominate the experience, you might be a little disappointed. That’s not to say the supercharged bent eight isn’t an engineering feat, one that exudes muscle and offers ample stress for the 305-section rear hoops to cope with. However, it’s the fact that the go-fast Camaro manages to combine a compliant ride quality with such a high level of dynamic talent that truly impresses. The 6.2-litre engine is still a big part of the ensemble and deserves to take a bow at curtain call, but it’s not always the leading act you expect it to be. Still, it’s hard to be disappointed with the entire show.