How much wiring is in your car

Ever wondered how complex your car is under its skin? Bentley has provided a fascinating insight

The majority of today’s vehicle faults are electrical rather than mechanical, and we don’t’ need a thousand words to explain why.

Bentley has released a fascinating image of its new Bentayga SUV that reveals its incredibly complex wiring harness.

Just like the nerve cells and fibres that transmit crucial pulses across the human body, the harness is responsible for interconnecting the Bentley’s vast electrical network.

There are actually seven different networks at play – operating at different speeds and for varying uses, but all integrated to share information where necessary.

Virtually all modern cars feature such electrical networks, though only the related Audi Q7 – especially in the advanced SQ7 variant – would come anywhere close to matching it. 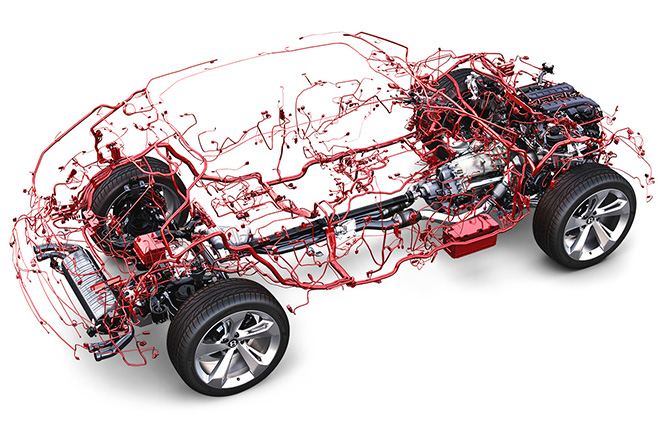 Both the Bentayga and SQ7 feature the world’s first 48v electrical system, which is secondary to the main system that is commonly 12v on today’s cars.

The 48v system is used for the electro-mechanical active roll control that gives the Bentayga (and SQ7) variable wheel-axle articulation depending on whether the SUV is travelling on road or off it.

If you’re wondering why the network is so complex, there’s barely any feature of the car that isn’t dependent on it.

Then there’s the electronically variable dampers, front seats with 22-way adjustment and massage/heating/ventilation functions, all-LED headlights, auto tailgate … and even a fridge (for the Bollinger).

The list could go on, but we’ll let you get back to studying that captivating picture.

Want more? Check out why the Bentley Bentayga is the most expensive SUV ever.