The Hyundai i30, Mazda 3 and Toyota Corolla are not only the best-selling hatchbacks in Australia, they’re also competing to be the country’s most popular model for 2016.

They have already accounted for nearly 64,000 sales between them up to the end of June

If you’re planning to join the bandwagon – or should that be bandhatch? – here’s WhichCar’s quick guide to the pros and cons of each model.

The South Korean brand’s small car no longer comes in three-door or wagon form, while its sedan spin-off carries a different nameplate: Elantra. Yet the five-door-hatch-only model is going gangbusters in the sales race, mostly thanks to a generous driveaway deal on its entry-level Active trim grade that has been saving buyers thousands over the normal cost. So the i30 is typically the pick if you’re looking for the sharpest-priced hatch here, while the Hyundai also offers the longest warranty of the group at five years. It also has the biggest boot (381 litres), though it’s not as sporty to drive as either the Corolla or Mazda 3 and lacks tech options.

A new hybrid variant released in mid-2016 means Toyota’s long-living nameplate offers the most fuel-efficient model among this small-car triple act. A petrol engine and electric motor combination produce an official fuel consumption of just 4.1 litres. The drawback is that the Corolla Hybrid is heavier than the regular models; all are powered by a 1.8-litre petrol engine only, and also more expensive – with the exception of the top-spec ZR. Toyota has done a good job of making the 11th generation Corolla a more accomplished driving experience compared with some of its more immediate predecessors. An updated sedan version is due in early 2017, which will be available with a range of active safety tech. Toyota Australia has confirmed the hatch will add the same features to its offerings around the same time. 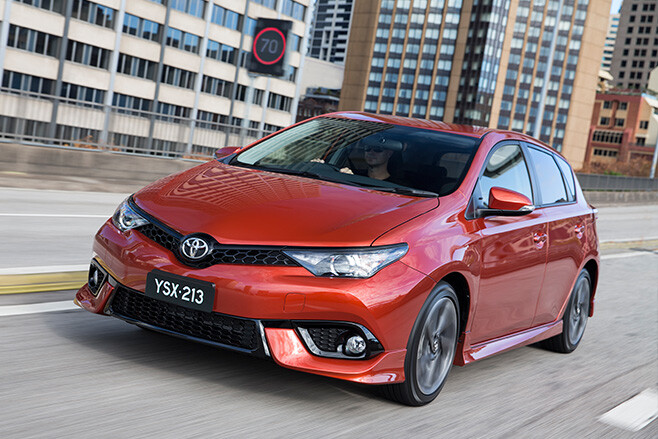 Our immediate advice is don’t buy a Mazda 3 right now. An updated version lands in August, bringing a raft of upgrades and new features. The 3 already offers one of the widest ranges of tech in the small-car segment, but it will add Traffic Sign Recognition (which helps keep the driver aware of speed limits) and multi-function, adaptive LED headlights. Mazda’s hatch is already the driver’s choice here, though a new G-Vectoring Control system aims to make the 3 flow even better on interesting roads by subtly reducing engine torque when the steering wheel is turned for a corner – to help balance the car for turning into a corner. A 2.5-litre is the pick of two good petrol engines offered. The 3’s boot is far from impractical, though it is the smallest here at 308 litres, while the Mazda’s on-road experience can still be slightly blighted by road noise.

a day ago
James Robinson