Italian luxury marque Alfa Romeo will dip its toes into the SUV segment, with the just-revealed Stelvio SUV set to launch locally by the end of next year.

Alfa Romeo will enter the increasingly-crowded luxury SUV market with the just-revealed Stelvio crossover, which made its first public appearance today at the LA Motor Show.

Styled as a super-sized hatchback rather than a traditional 8-window SUV wagon, the Stelvio merges the Giulia’s dramatic front-end styling with the silhouette of the Giulietta, with cavernous wheelarches containing massive cloverleaf-design alloys. 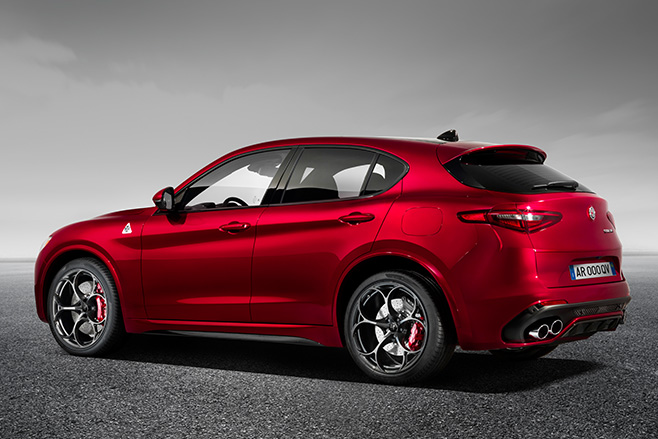 The show car represents the performance flagship of the range, the Stelvio Quadrifoglio Verde, or QV. Those huge wheels contain a sizable performance brake package and the bonnet is vented to expel excess engine bay heat from the twin-turbocharged 380kW 2.9-litre petrol V6 that lurks beneath it.

On the Stelvio QV, the sole transmission on offer will be an eight-speed ZF-sourced automatic transmission, with paddle shifters and multiple calibrations to cover everything from everyday driving to racetrack duty. Power is sent to all four wheels via Alfa Romeo’s ‘Q4’ AWD hardware, with torque vectoring and an continuously-variable torque split ensuring traction under power.

In regular driving conditions the Q4 system sends all drive to the rear wheels, however can instantly take up to 60 percent of power and torque to the front axle should traction at the rear be challenged. Off-road drive modes will also allow the Stelvio to tread where ordinary road cars can’t. 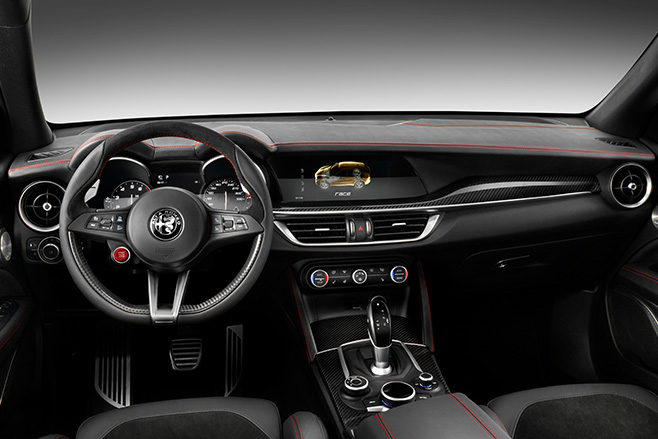 Suspension is via a car-like double wishbone setup at the front and a four-and-a-half link system at the rear. Carbon-ceramic brakes will be available as an option.

A 208kW 2.0-litre petrol four-cylinder turbo will be available lower in the range, with a stout 400Nm developed at 2250rpm. Fuel economy is described as “first-class”, but Alfa has yet to release those stats.

For the Australian market, the Stelvio will follow the eagerly-anticipated Alfa Romeo Giulia late in 2017. Precise details of the model range, equipment levels, pricing and specifications will be released closer to that date.