Kia has launched its most exciting car yet, the Stinger, providing those who love driving with an alternative to more vanilla transport.

The Stinger is Kia’s first dedicated rear-wheel-drive passenger car sold in Australia. It is so significant that we’re the first market outside of Korea to receive the five-door liftback sedan.

The Stinger will launch here with a six-variant line-up split across two engines. Three of them feature a turbocharged 2.0-litre engine producing 182kW and 353Nm, giving it the same level of performance as a traditional V6, and the other three use a twin-turbocharged 3.3-litre V6 producing a V8-rivalling 272kW and 510Nm. 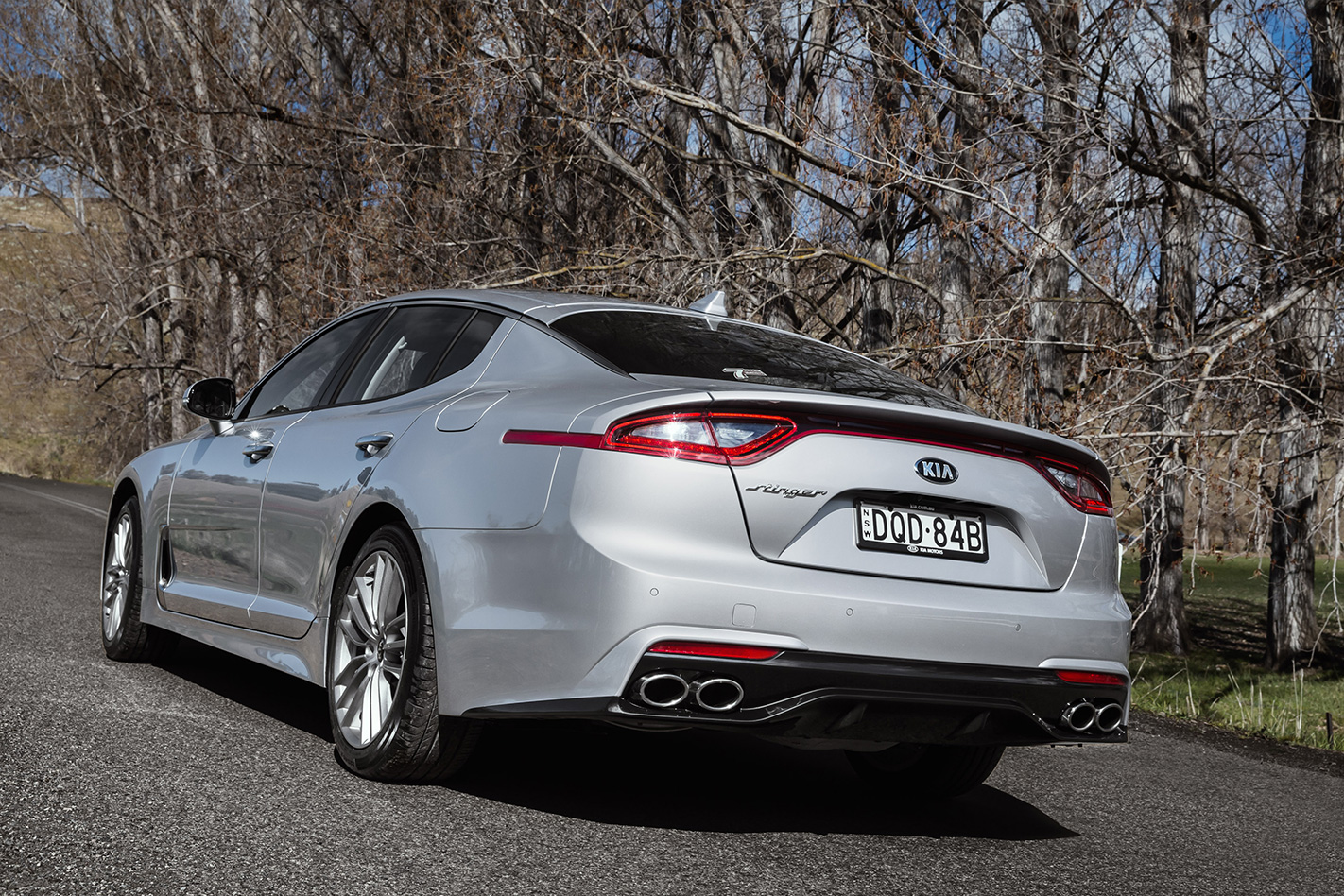 The Stinger line-up starts with the $45,990 200S (above), the “200” denoting variants using the turbo four-cylinder. Compared with the other cars in the Stinger line-up it’s a bit basic, featuring a smaller seven-inch multimedia touchscreen and missing out on important driver aids available on more expensive models such as active cruise control, and – more vitally – autonomous emergency braking that can automatically avoid - or lessen the severity of - a crash. 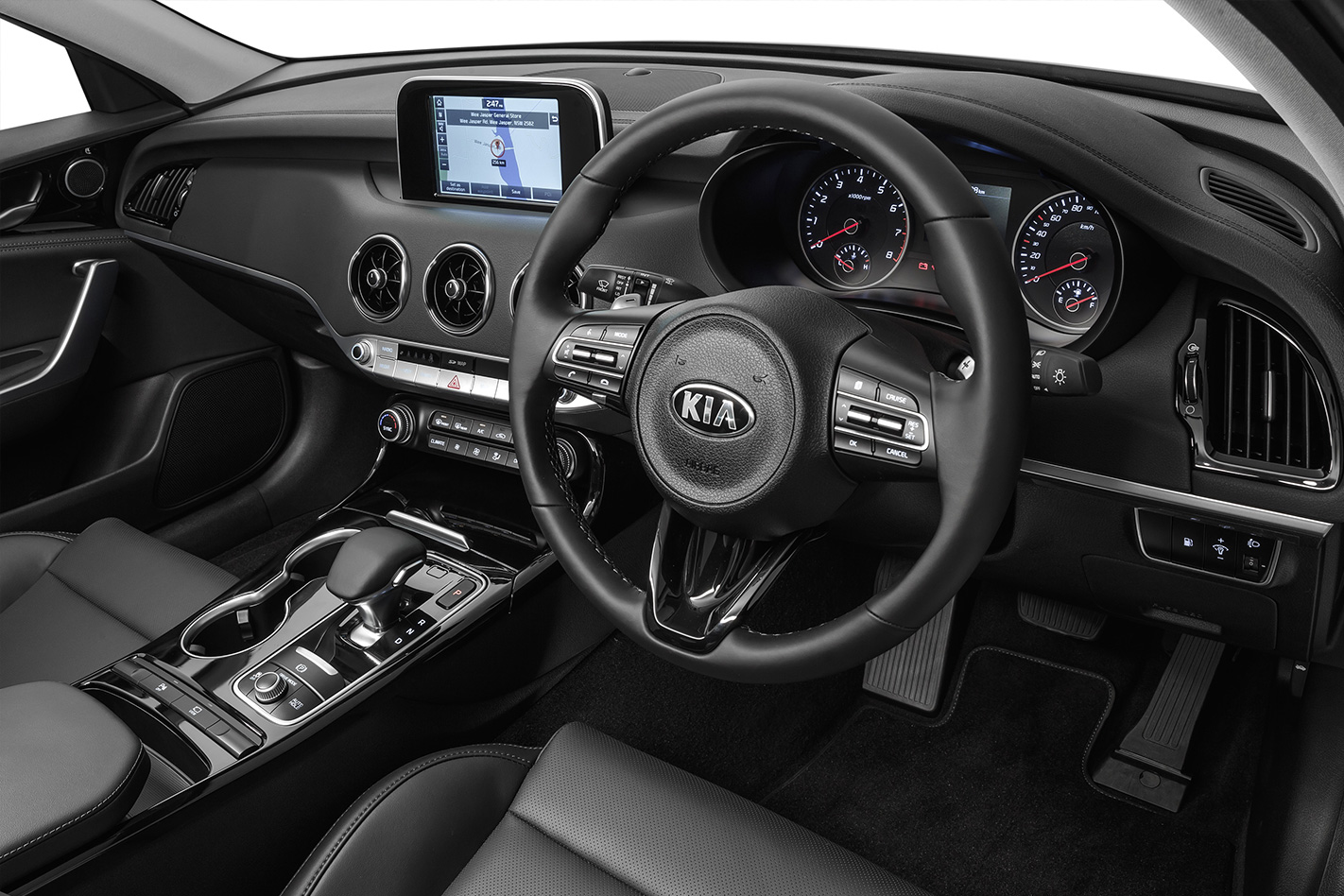 Each version of the Stinger also comes with seven airbags and an eight-speed automatic transmission featuring a torque converter that includes a balance bar to make it run much smoother. They also all have a feature called launch control – more on that a bit later – and selectable drive modes ranging from Eco to Sport. It’s a bit of overkill, but all six versions come with quad exhaust pipes – and in the four-cylinder cars’ case there’s no skimping, they all work.

Stepping up to the $52,990 Kia Stinger 200Si (below) adds front parking sensors, real leather trim, auto wipers, a bigger eight-inch touchscreen, different 18-inch alloys, a nine-speaker audio system (two of which are under the front seats) that pipes artificial engine noise into the cabin. There’s better-looking cabin trim, too. But the Si’s biggest advantage is the suite of driver assist technology it adds: autonomous emergency braking, a collision warning system that alerts drivers that they’re about to collide with the car in front, a lane-keeping system, active cruise control, and a driver fatigue monitor. 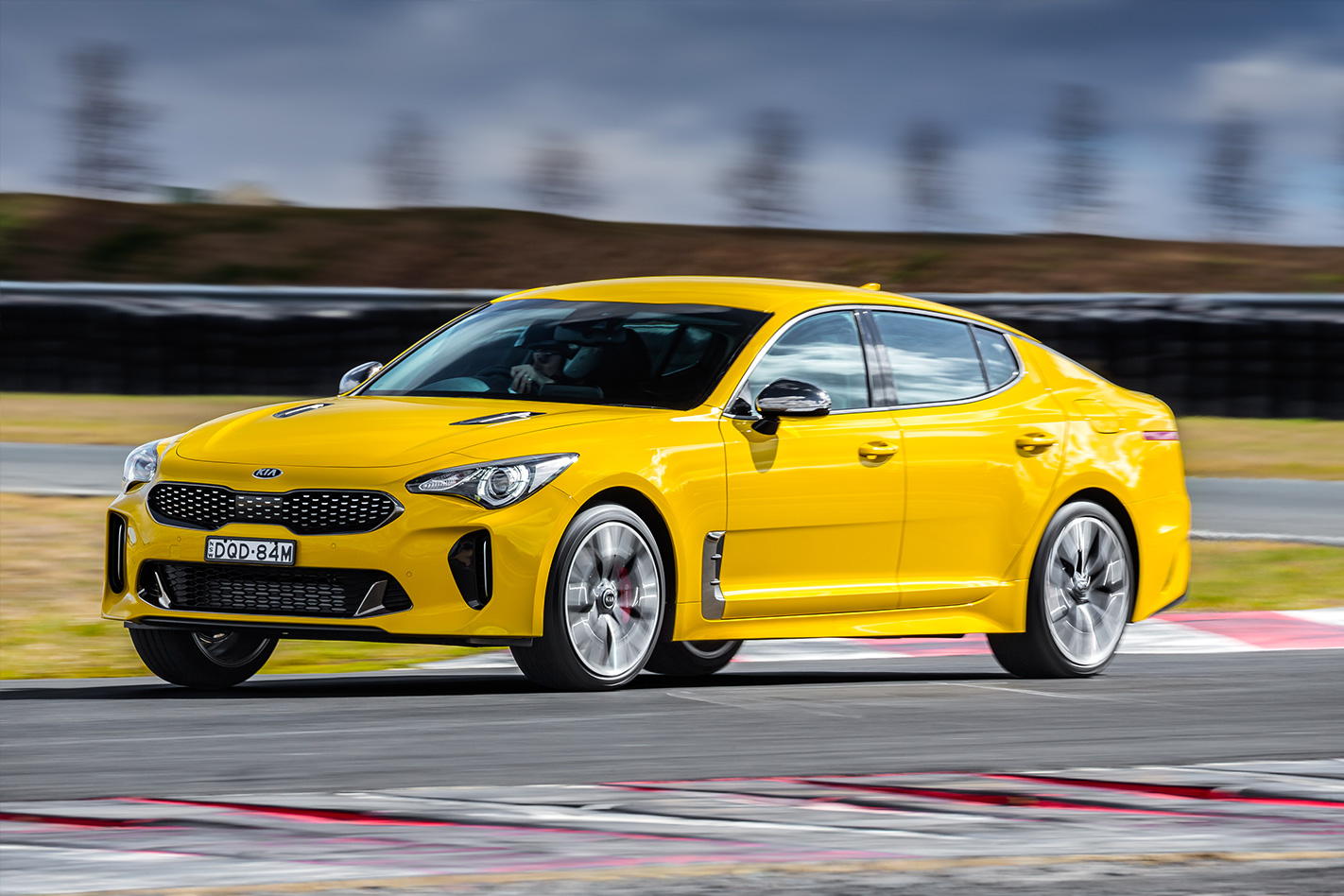 The range-topping 2.0-litre is the $55,990 GT-Line. The headline here is that this car includes an active suspension system that can flip-flop between a comfort mode that is more pliant on the road than the traditionally sprung 200s, and a sports mode that helps hold the GT-Line flat while cornering, making it even more of a sports car. As well, the car sits on bigger 19-inch alloys, the heated and cooled front seats have even more leather and electric adjustment, the driver’s seat gains a memory function, the steering wheel adjusts electrically, the dash contains a wireless phone charger, a sunroof brings the outside in, LED headlights show the road ahead, and the small screen in between the analogue tacho and speedo in the instrument panel adds colour and racetrack-like gauges.

The steering wheel also squares off on the bottom, alloy trim replaces some of the plastics, suede-like material lines the roof, and the audio system jumps to 15 speakers. But the forte is an adaptive suspension system that flip-flops between Sport and Comfort settings, allowing drivers to drive the Stinger like a sports car when the roads get twisty. 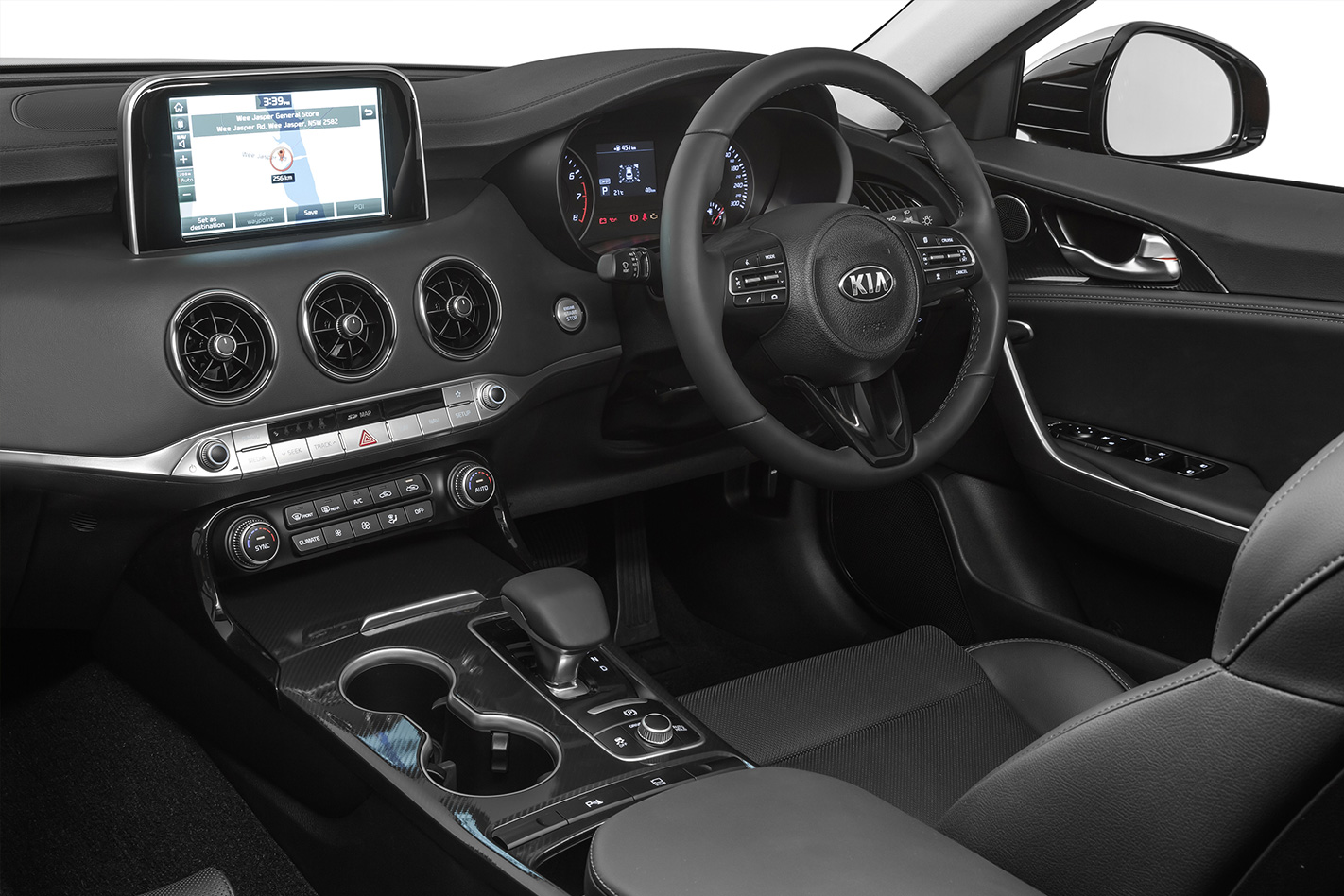 All V6 versions get a mechanical limited slip differential, which helps with cornering, variable ratio steering that makes it easier to turn the slower or faster you go, bright red Brembo calipers wrapped around larger brake discs than four-cylinder models, and different exterior trim such as dark-finish exterior mirror caps. They all weigh about 100 kilograms more than the four-cylinder equivalents.

The entry-level $48,990 V6, the 330S, otherwise follows the 200S’s equipment list, meaning it also misses out on the active cruise control and automated braking. 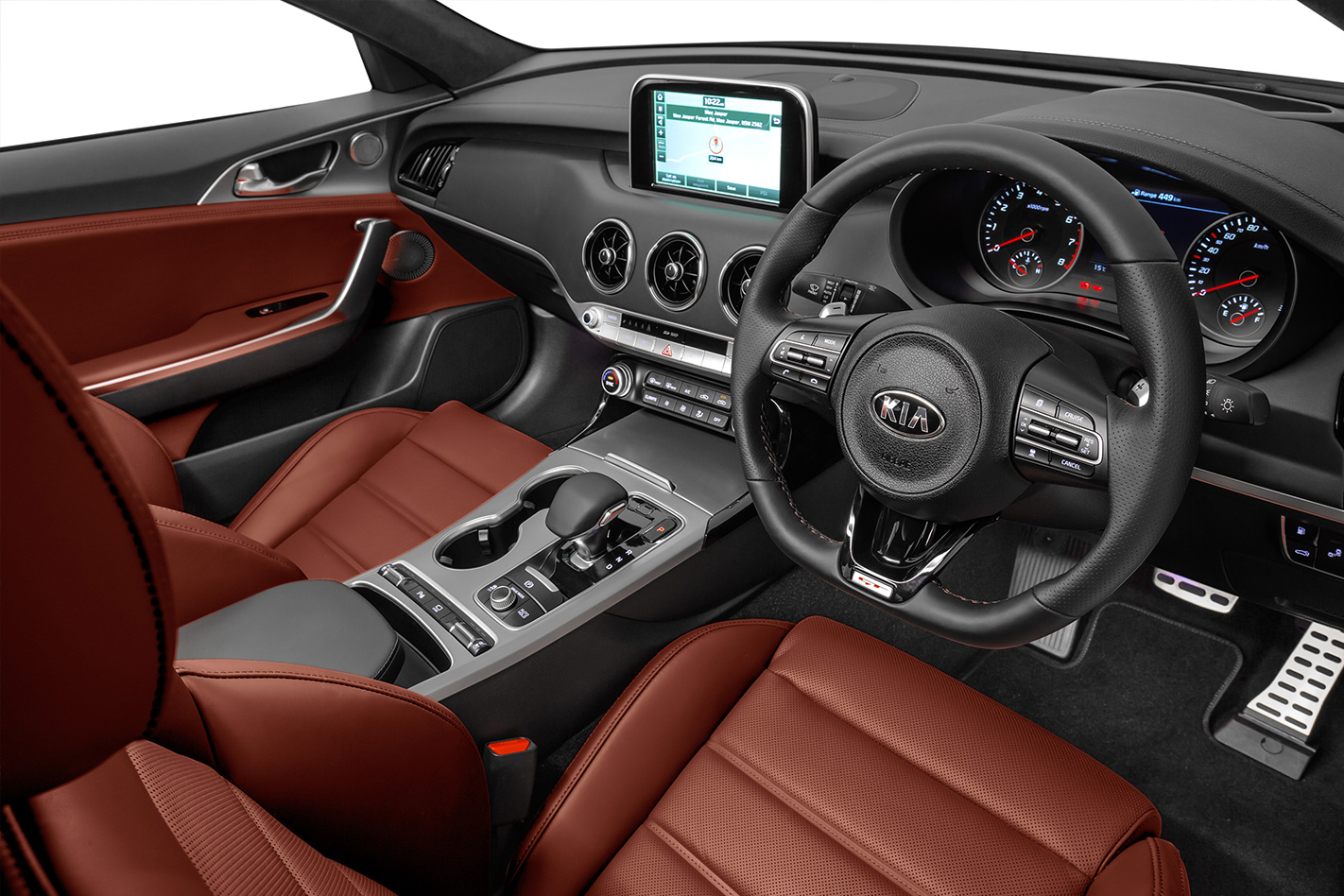 Similarly, the $55,990 330Si adds all the features of the 200Si, but uses a more rigid suspension tune to account for the extra weight of the V6 engine. Notice that it is only $3000 more than the equivalent turbo-four version? We did. From this grade up, the cars also get staggered Continental tyres – the rears are lower aspect, meaning they should provide more grip to transfer more of the V6’s power to the road.

The jewel in the Stinger’s crown is the $59,990 GT (below). Again, it follows the 200 GT-Line’s equipment list closely, including the dynamic suspension and electric steering column adjustment, but uniquely adds a track-focussed menu to the instrument cluster that monitors oil temperature, boost and torque, a lap timer, and even a G-force meter – a dot that moves around inside a spider’s web to show where the laws of gravity want the car to go. 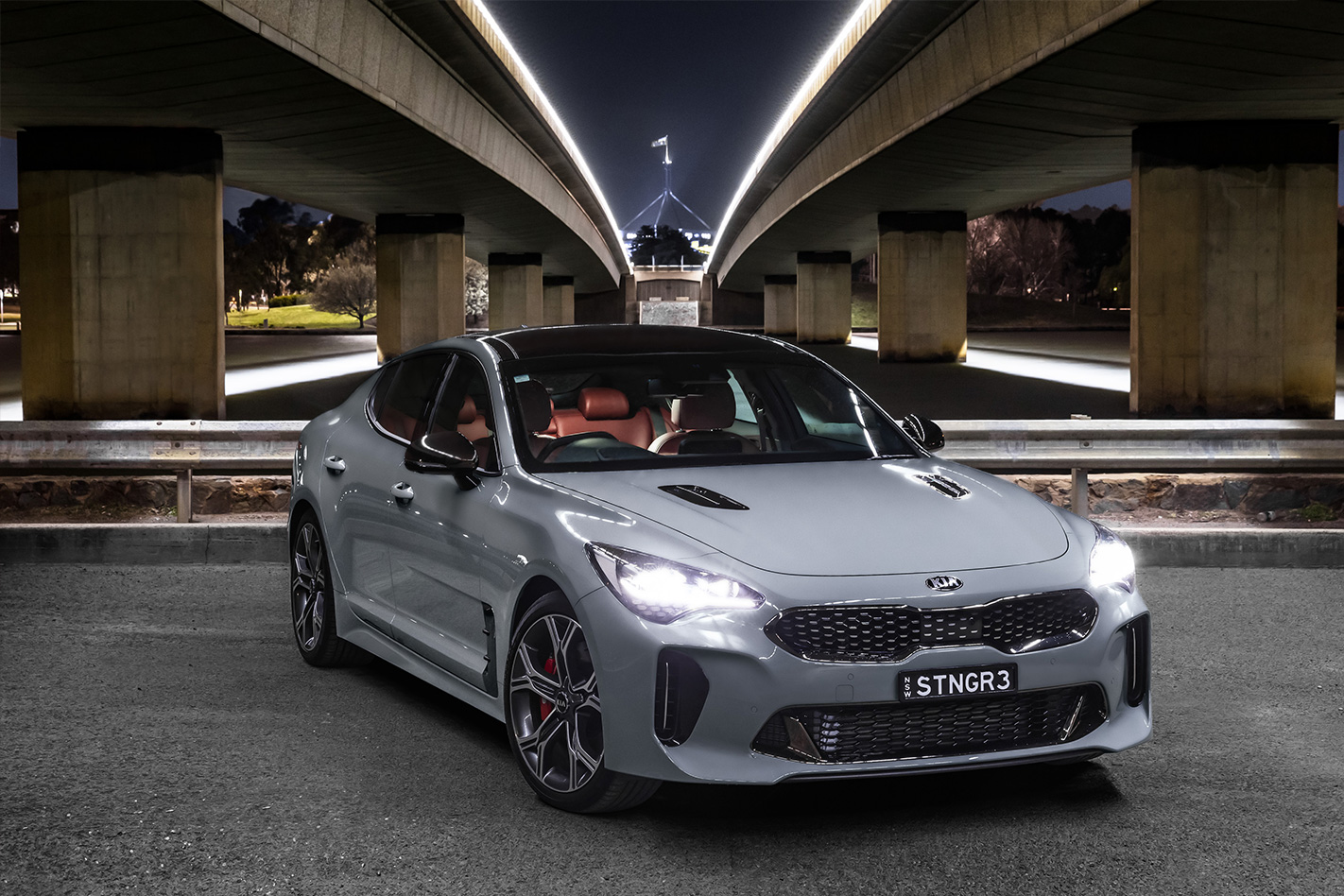 You only get a temporary-use space saver spare with the Stinger.