Volkswagen has confirmed the Australian details for the 2017 Golf R, Golf GTI and Golf 110TDI wagon, due to arrive later this year.

Following on from the more prosaic Golf range that was announced earlier this year, specs and pricing have now been announced for the updated Golf R, Golf GTI and Golf 110TDI wagon. Due in Australia later this year, all three boast substantial improvements over their predecessors.

While the new specifications have been revealed for all three models, pricing for the Golf ‘7.5’ range will be confirmed next month in May.

The most notable change for the Golf R is its faster 0-100km/h time, with the German carmaker claiming it will reach 100km/h from standstill in just 4.8seconds, 0.2 seconds faster than its predecessor.

While the same 2.0-litre turbocharged four-cylinder petrol engine remains in the Golf R, it’s now mated to a new seven-speed DSG transmission, replacing the six-speed dual-clutch auto previously featured. That’s matched by a slight power boost that pushes the R to 213kW/380Nm, 7kW more than the 206kW/380Nm of the outgoing model.

VW’s 4MOTION all-wheel drive system also remains as does the six-speed manual gearbox option, and the only available options are a Driver’s Assistance package and panoramic sunroof.

Other changes include the addition of gesture control and a larger 9.2-inch navigation system. 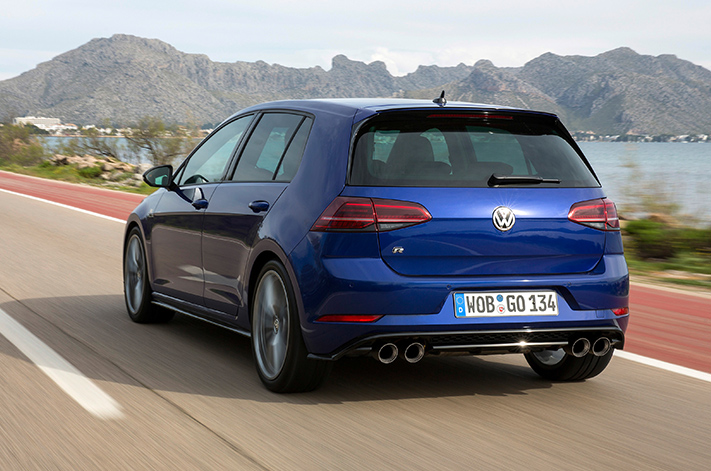 “You need not look too far in to the past to find the time when 4.8 seconds was the preserve of a Porsche 911,” said Michael Bartsch, Volkswagen Group Australian Director.

“It is extraordinary that a relatively affordable car not only attains this performance, but includes refinements and technologies that remain options in some prestige brands.”

Volkswagen claims the Golf GTI “is also extensively upgraded”, however the standout change is its improved power output.

Featuring the same 2.0-litre TSI four-cylinder turbo engine as the outgoing GTI (and now found in the Golf R), mated to an unchanged six-speed manual and DSG transmission, its peak power figure has been increased from 162kW to 169kW, while torque remains at 350Nm.

It also now features an 8-inch navigation system, instead of the 6.5-inch touchscreen of the previous model.

The Golf R and Golf GTI will arrive in Australia in August while the Golf 110TDI Highline Wagon will get here a month earlier in July.

Under the bonnet of the 110TDI is a 2.0-litre 110kW/240Nm turbo diesel engine, which will be mated to a seven-speed dual-clutch auto as standard.

Like the two hatches, driver assistance and infotainment packages are optional on the Golf 110TDI Highline Wagon.