Holden didn’t completely unveil its next-gen Commodore, but it did reveal a flagship V6 variant with all-wheel drive.

Australia was given a peek into its driving future last week with a “65 percent” prototype of the German-built 2018 Holden Commodore making a veiled appearance at Holden’s Lang Lang Proving Ground, south east of Melbourne.

Based on the new Opel Insignia, the next Commodore is built on GM’s all-new E2XX platform which can accommodate front- and all-wheel-drive powertrains instead of the rear-wheel turners we’ve become accustomed to since Holden began manufacturing large sedans in 1948.

The big V8s are gone too. Entry and mid-range models will be powered by four-cylinder 2.0-litre turbocharged petrol and diesel engines with FWD, while the range-topper will be a 3.6-litre V6 with AWD. All variants will come with automatic transmissions. 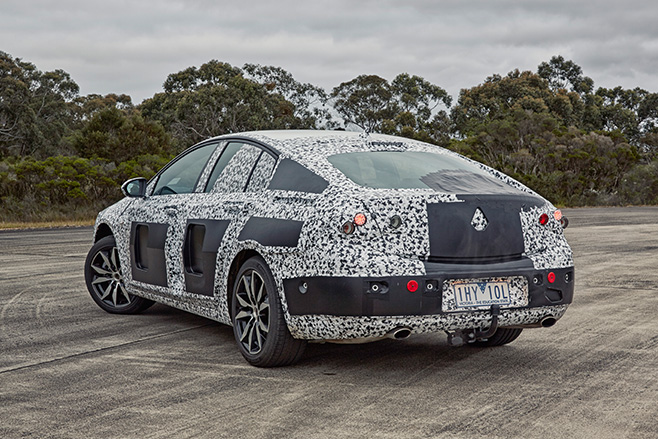 While Commodore’s past association with four-cylinder engines was not a happy one, Holden says the new the four-pot petrol turbo variants will be faster and more powerful than the current V6 Commodore.

That remains to be seen, with the V6 AWD variant on show under camouflage and its drivetrain and suspension not yet fully tuned. Much of the AWD tuning is to be done for Australian conditions and Holden insists Commodore won’t be a simple rebadging exercise.

The AWD system will help to appease Commodore drivers used to power going to the rear wheels, and replaces the rear differential with a pair of individual ‘Twinster’ clutches that constantly control and distribute torque and speed to “generate a rear-drive feel”. 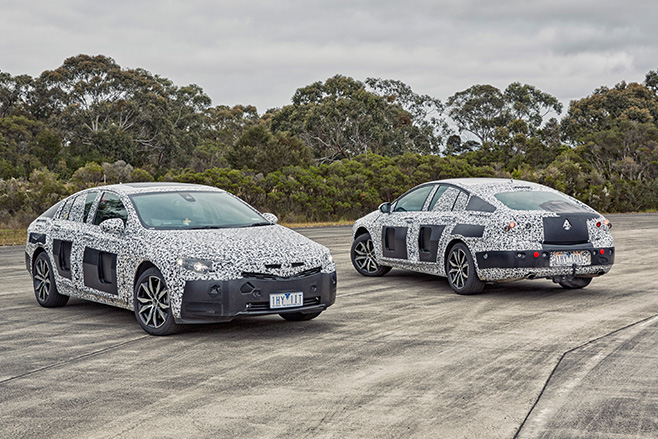 Putting national sentiment and the work-in-progress refinement aside, there seems to be a lot to like about the new ‘hero’ Commodore including the all-paw drivetrain, nine-speed automatic transmission, and Euro-styled interior similar to the new Holden Astra. It will also be big on technology with the latest infotainment systems including Apple CarPlay and Android Auto connectivity and driver-assist and passenger comfort features intended to match the best Europe and Japan can offer

A major styling difference is the sweeping ‘Sportback’ roofline that ends in a hatch-like boot which provides way more space than the VF sedan, despite the car’s slightly smaller footprint.  But the new Commodore will be narrower than the current VF, with 58mm less shoulder room which will make the back seat a little cosier for three people.­