In an unexpected move, Holden has let us loose in a prototype of its next-generation, fully imported Commodore. And we’re allowed to write about it!

In an unexpected move, Holden has let us loose in a prototype of its next-generation, fully imported Commodore. And we’re allowed to write about it!

WHAT IS IT?
A “65 percent” prototype of the forthcoming, German-built 2018 Holden Commodore riding on GM’s all-new E2XX platform. It’s mostly the real vehicle minus several months worth of drivetrain, suspension and NVH development, and with not-quite-production plastics and a load of clever body cladding disguising its actual shape.

WHY WE’RE TESTING IT?
Because this car is beyond full circle for the Commodore – retreating back to its German roots, just like the 1978 original, but this time near-identical to its European brother in virtually all areas. Except one. At Australia’s insistence, the next-gen Holden Commodore/Opel Insignia has been engineered to feature a range-topping V6 AWD variant, which is what we’re driving here. 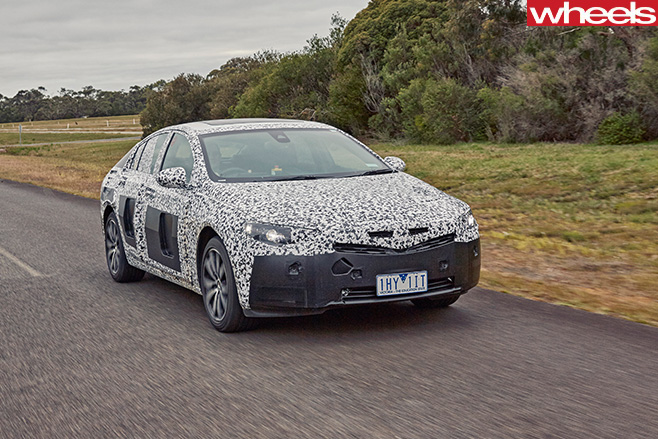 MAIN RIVALS
With the Ford Falcon dead and buried, and the rear-drive, domestic large car to follow suit once the current Commodore/Calais dies in late-2017, the next-gen Commodore – for now, dubbed NG (for Next Generation) – will compete head on with the biggest and best in the medium segment. Think Volkswagen Passat, Skoda Superb, Mazda 6, and Ford Mondeo, as well as Toyota’s evergreen Camry (also due for an all-new replacement in 2018) and the lower end of the premium-medium segment (A4, 3 Series, C-Class, etc).

VERDICT
A promising start for the ‘imported’ Holden Commodore, particularly its mega-Astra interior and its impressive all-wheel-drive system. While its V6 is closely related to the current car’s, and without any acoustic tuning sounds much like the VF’s engine, you can already sense the superior refinement built into this car. And its nine-speed automatic transmission is excellent. Indeed, there’s the potential for a truly great Commodore here, providing people like the way the production car looks. 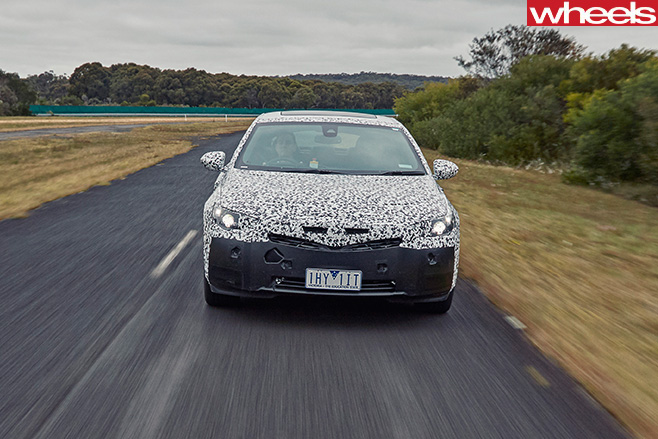 THE WHEELS VERDICT
PLUS: Feels smaller and more agile than it looks; highly advanced all-wheel-drive system; excellent automatic transmission; stylish interior; quality seating; huge boot
MINUS: Doesn’t quite match the cabin shoulder width of the current VF; centre-rear position is firmly padded and would be uncomfortable over longer distances; upgraded V6 still sounds like a Commodore; transmission’s ‘manual’ shift mode puts the + and – the wrong way around

THE WHEELS REVIEW
MEET Frau Brunhilde. She may not be the prettiest mare in the stable but underneath all that body armour and disarming warpaint hides the next-generation Holden Commodore. Or Opel/Vauxhall Insignia, depending on where you hail from. 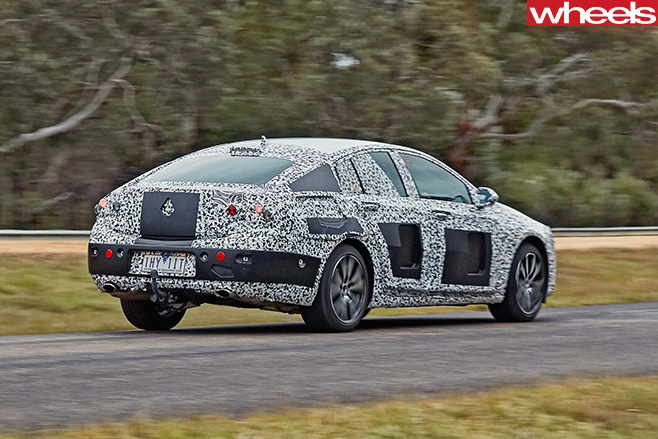 While this car’s appearance is a deliberate bum-steer, what’s underneath is incredibly close to reality. And surprisingly close in size to the current VFII rear-drive model it replaces. Measuring 74mm less, 36mm narrower and riding on a wheelbase 86mm shorter, our next Commodore is the first generational change to shrink in size, though it’s still a sizeable car.

To put the 2018 Commodore into context, it’s almost a dead-ringer for the VT-VZ generation (1997-2006), and in a world championing smaller passenger cars (but larger SUVs…), that’s a step in the right direction.

So is the MY18 Commodore’s interior. Appearing closely related (underneath acres of rubberised covering) to the new Astra’s dashboard architecture, the Commodore gets more upmarket instruments, particularly in top-line models with their configurable TFT centre dials, and enough room to please most of Commodore’s existing fan base. 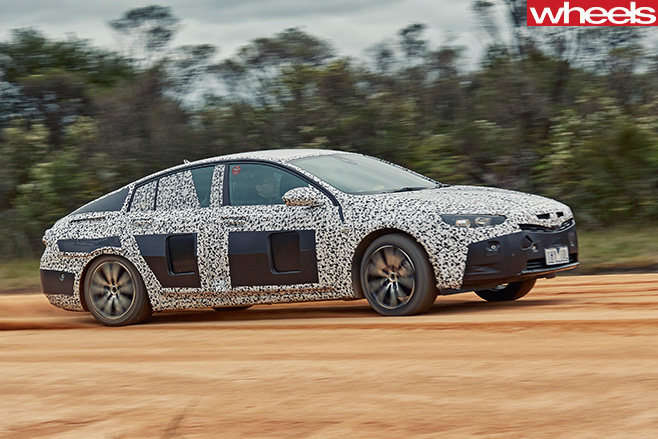 There’s noticeably less shoulder width (58mm less, with 44mm less hip room) but the new Commodore/Insignia is still a roomy car. And despite a sweeping rear roofline that cuts head room by 13mm, rear passengers gets a much broader view than in VF, providing theatre-style vision and a deep cushion that’s more comfortable than the current car’s if you’re only seating two. Great boot too (think Mondeo and Skoda Superb-rivalling load space), with an easily accessible cavern able to be extended by fold-flat backrests.

It’s the oily bits, however, that we’re dying to try. Given the strong emphasis on six-cylinder variants for Australian consumption, Holden took the lead on local development of suspension, steering and chassis-control for the AWD V6. And while Frau Brunhilde is a long way from finished – no adaptive dampers, no Sport mode for the drivetrain and sophisticated ‘Twinster’ AWD system, or any ‘dynamic wheel torque braking’ as yet – you can feel the next Commodore’s core DNA rising to the challenge of making this car feel great. 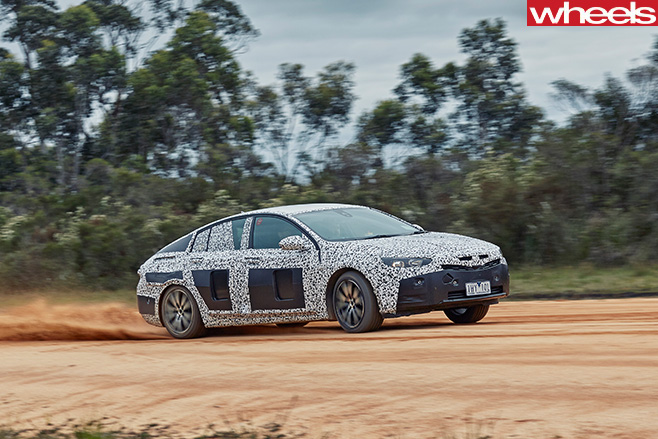 Much like the last Honda Legend (and the front-wheel system in Honda’s forthcoming NSX supercar), the MY18 Commodore’s all-wheel-drive system does away with a rear differential. In its place sits a pair of individual clutches, dubbed ‘Twinster’ by GM, that constantly control and distribute wheel torque and speed, even during engine braking on overrun, to “generate a rear-drive feel”.

It can send up to 2500Nm to the rear wheels, and 1500Nm to each side, and while Twinster’s extremes appear relatively front-biased (the max split is only 50/50), according to Holden’s chassis supremo, Rob Trubiani, it changes 100 times a second and spends an inordinate amount of time sending drive to the rear.

On the road (well, Holden’s speed bowl and ride/handling circuit at its Lang Lang proving ground), Brunhilde shows signs of just how dynamic the AWD Commodore will be. Even with the Twinster AWD system only operating in Normal mode (Sport will introduce a much greater ‘controlled oversteer’ flavour), the MY18 Commodore feels planted, poised and smaller than its dimensions would suggest. Small-bump ride suppleness may be lacking at this stage but it’s a promising effort given this prototype is essentially Stage One for road development. 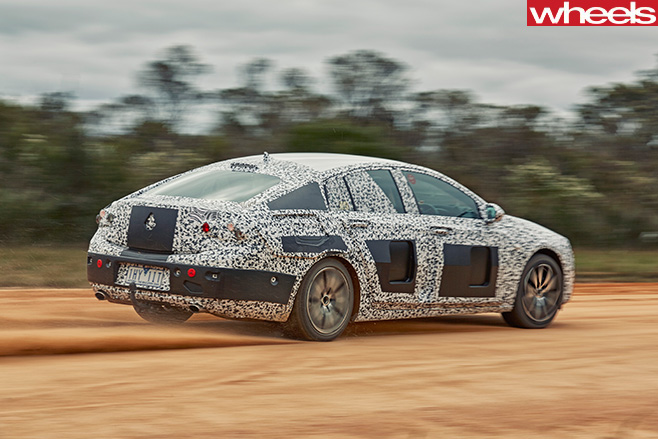 Showing slightly more polish is the drivetrain. The V6 engine – now dubbed ‘LGX’ and mounted transversely, instead of the VF’s ‘LFX’ longitudinal iteration – remains direct-injection, but gains cylinder-deactivation to improve efficiency. Tied to a silky all-new nine-speed automatic transmission (there will be no manuals in next-gen Commodore), it’s a smooth and punchy performer, despite not having the full 230kW/370Nm of the production version at this early stage.

With no acoustic tuning yet, the LGX V6 still sounds like a six-pack Commodore, but it will rev cleanly to 7250rpm, sans any vibration or NVH intrusion, and at times upshifts at a heady 7100rpm.

It’s very tightly geared in lower ratios – just 400 revs apart at its closest – though the gaps widen at higher speeds. On Lang Lang’s speed bowl, manually upshifting from sixth to ninth gear at an indicated 148km/h sees the tacho drop from 4750rpm to 3500, 2500 and then 2000rpm in top. 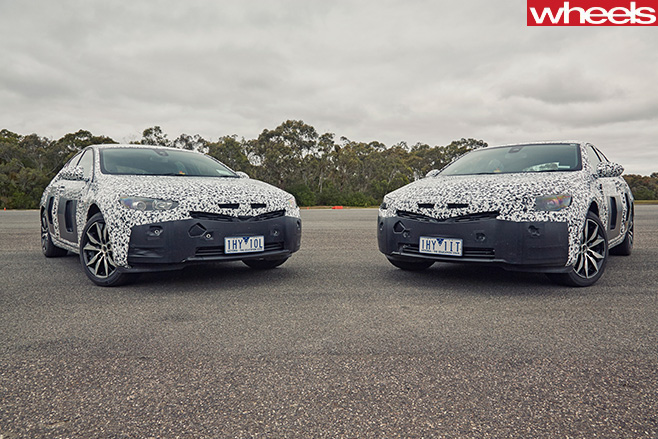 And Holden claims that ninth gear is fully useable in normal driving. At 110km/h, the engine is ticking over at barely 1400rpm, while the cylinder-deactivation is so subtle that without paying attention, I didn’t notice it.

Our final test (besides a nail-biting dirt-road rally section demonstrated by Rob Trubiani) is wet-surface traction. Nail the right pedal with a touch of steering lock on and there’s an ever-so-slight nibble from the front 245/45R18 Continental tyres, but it’s negligible and certainly nothing to fear. Given our strong affection for all-wheel-drive Subarus, Aussies are going to love the traction of the AWD V6 Commodore.

What’s missing here at Lang Lang, and likely forever from a Holden-badged four-door, is a V8 engine. And there’s no sign of the four-pot front-drivers that will open the 2018 Commodore line-up. But given Holden’s promise of “the most powerful base-model Commodore ever”, and the co-development Holden’s chassis engineers have had in tuning the entry model’s suspension (at the Nurburgring, no less), I’d say the turbo-petrol and turbo-diesel Commodores should still offer plenty for discerning Aussie motorists.

And once GM engineers the Chevy Camaro for right-hand drive, I guarantee no one will be complaining about the lack of a V8 Commodore.