Wheels pitches 10 of the biggest sellers in the medium-to-large car segment to see which is the best of the current crop. Here’s number 1, the Volkswagen Passat.

Wheels pitches 10 of the biggest sellers in the medium-to-large car segment to see which is the best of the current crop. Here’s number 1, the Volkswagen Passat.

SCHADENFREUDE, or deriving pleasure from somebody else’s misfortune, could have been invented for Volkswagen’s current situation.

After two decades of growth, awards and adulation, the twin cracks of unreliability and scandal have undermined the former German golden child’s reputation. But competitors will be smiling on the other side of their corporate faces when they realise how consistently accomplished Volkswagen’s latest Passat 132TSI Comfortline is. 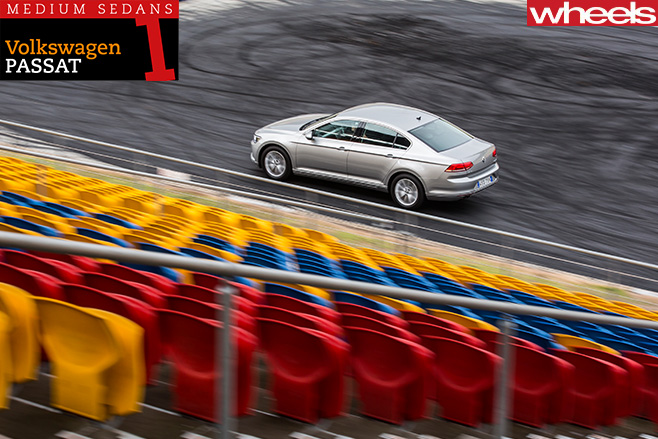 Some 200kg lighter and 45kW shy of the Ford Mondeo, the eighth-generation Passat sipped an unbelievable 3.3L/100km less than the Ford, yet both recorded identical 0-100km/h and 80-120km/h times, with the German sedan just 0.2sec adrift over the quarter.

Such efficiency is remarkable, but equally so is the Passat’s silken delivery. Its 1.8-litre turbo-petrol and seven-speed dual-clutch combo, while not explosively eager off the blocks, provide turbine-smooth punch for easy and effortless motoring.

Someone suggested the Passat’s ultra-planted chassis deserves to swap engines with the related Superb’s 162kW 2.0-litre turbo tearaway, due to the Volkswagen’s superior ability in stringing together corners with unflappable calm, poise and control. 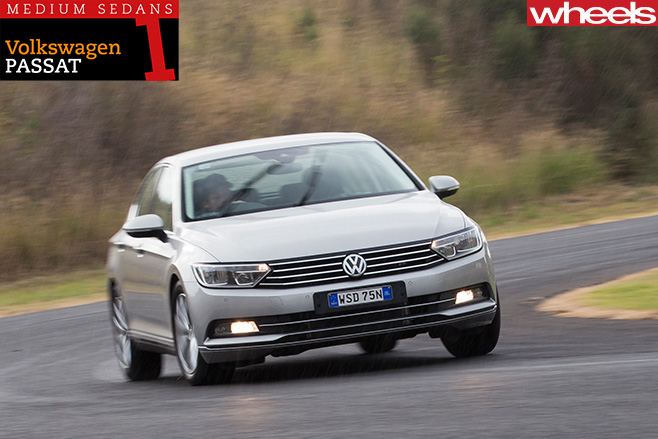 In comparison, its Czech mate struggles to join the dots with such conviction.

The Passat’s steering feels somewhat light initially (especially after a stint in the feelsome Mondeo), but welcome extra weight at higher speed infuses a hard-driven 132TSI with imperious roadholding confidence and capability, backed up by its lightweight agility, resulting in serious point-to-point pace.

Passat’s classy cabin offers up more praise, thanks in part to plenty of space front and rear, along with liberal lashings of sensual materials and slick metallic trim throughout, while lush leather sports seats also rate highly. Perfectly positioned, you can drink in the dashing instruments, slick wheel, handy central touchscreen, climate switchgear and face-level full-length vents while thinking, in terms of ambience, you could be in an Audi. Design, on the other hand, is rather pedestrian seeing Passat’s fascia is just like an upscaled Volkswagen Golf’s, lacking in originality. 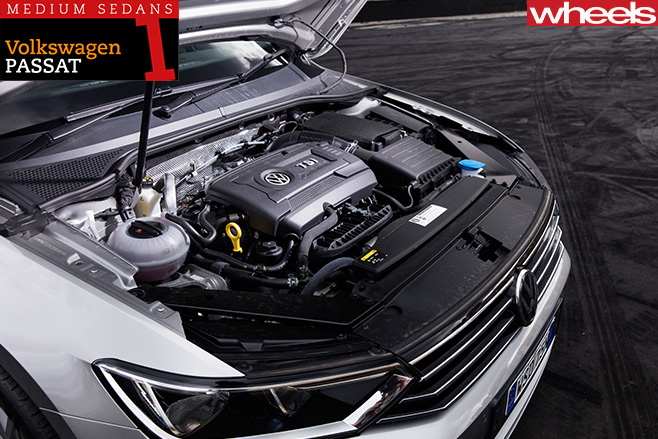 Still, back-seat passengers are looked after with temperature controls, air outlets and a comfy bench. Headroom isn’t brilliant and the cushion feels flat after a while, but all the basics are there and the interior remains pleasingly cocooned from the outside world. On smooth roads, anyway.

Hit a few bumpy sections, however, and some of that serenity slips away, raising an eyebrow or two as well as a few rattles – a malady not helped by a slightly busier and louder ride than expected. This is quite a disappointment, given the smaller wheels compared to the supremely cushy Mondeo. The VW’s suspension simply lacks the Ford’s suppleness. 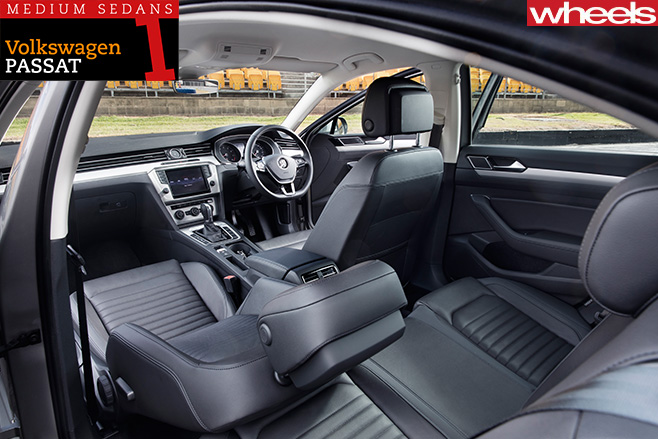 Additionally, damp roads revealed unexpected front-axle tramp when the driver attempts to power away quickly from standstill, further upsetting the Passat’s sense of imperviousness. This only occurs under provocation, however.

In the broader scheme of things, the 132TSI Comfortline rarely puts a wheel wrong. What it lacks in visual panache is more than made up for by prodigious talent at every single turn. Literally.

So snigger at Volkswagen’s troubles all you like; this car’s completeness is as indisputably colossal as it is colossally indisputable. While not quite as brilliant as a base Golf, the Passat deserves to be the future-model benchmark for every rival product planner, and at the top of every buyer’s shortlist. 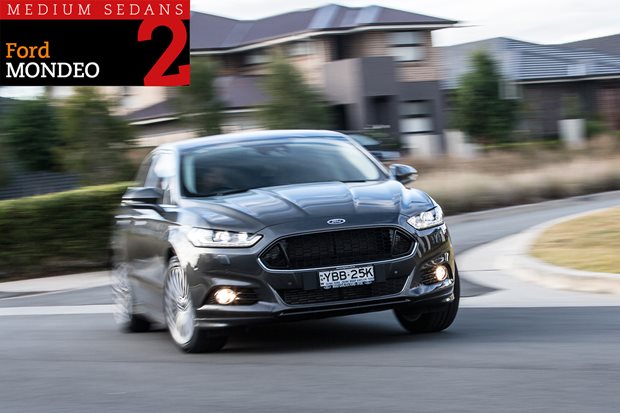 Wheels pitches 10 of the biggest sellers in the medium-to-large car segment to see which is the best of the current crop. Here’s number 2, the Ford Mondeo. 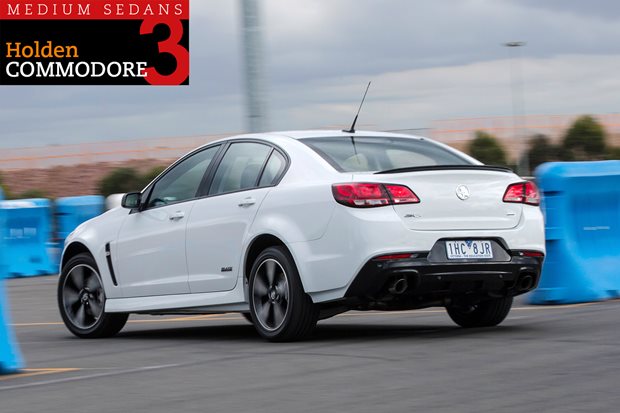 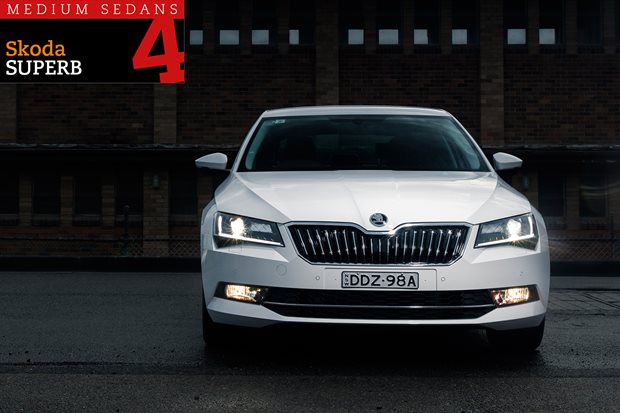 Wheels pitches 10 of the biggest sellers in the medium-to-large car segment to see which is the best of the current crop. Here’s number 4, the Skoda Superb. 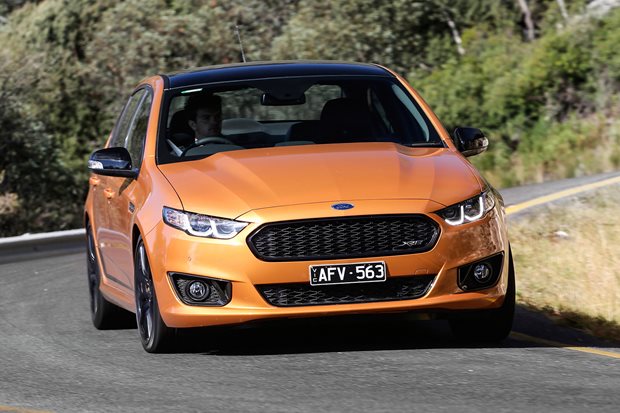