These three hatchbacks hit the sweet spot. But have Corolla and Focus improved enough to reel in the mighty Golf?

These three hatchbacks hit the sweet spot. But have Corolla and Focus improved enough to reel in the mighty Golf?

Can’t wait to see the final scores? Jump to the verdict now.

SCIENTISTS first coined the term ‘The Goldilocks Zone’ to describe the narrow distance band from a sun that can support life. Not too hot, not too cold, all that stuff. In our solar system, Earth is pretty much it. Let’s care more for her.

Similarly, the Golf class, as the C-segment is often described, has long been the car industry’s sustainable sweet spot, with the Volkswagen, Ford Focus and Toyota Corolla regularly duking it out for global best-selling honours.

Australia, of course, is no exception, though it’s the Corolla and Mazda 3 that battle for number-one status. Small cars rule, while their similarly sized SUV offshoots (the RAV4 and CX-5 respectively) back them up for outright popularity.

Coincidentally, the Corolla, Golf and Focus have all undergone change during 2015, prompting this shootout. Does this market’s perennial underdog Ford have what it takes to challenge the class benchmark Volkswagen and the best seller Toyota? 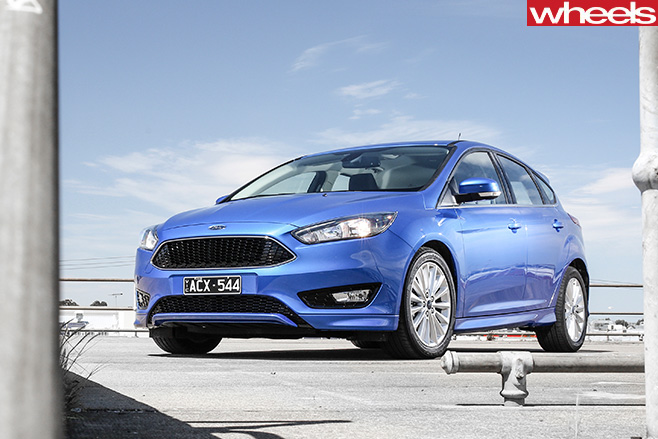 Besides being the newest, the October-launched Focus LZ series from Germany (via Thailand) has had a deeper makeover than usual, scoring a substantial nose job and tail tuck, a revamped dashboard, loads more standard gear, revised steering and suspension tuning, better sound-deadening and – most intriguingly – a fresh drivetrain. All to keep the 2011-era Mk3 Focus from falling too far behind.

The results make it the most powerful mainstream small car in history. The sweet but toothless old 92kW/159Nm 1.6-litre base and mainstay 125kW/202Nm 2.0-litre GDi atmo units have given way to a 132kW/240Nm 1.5-litre ‘Ecoboost’ turbo tearaway, driving the front wheels via a six-speed manual or six-speed torque-converter auto. Both the problematic dual-clutch and the diesel have been binned. 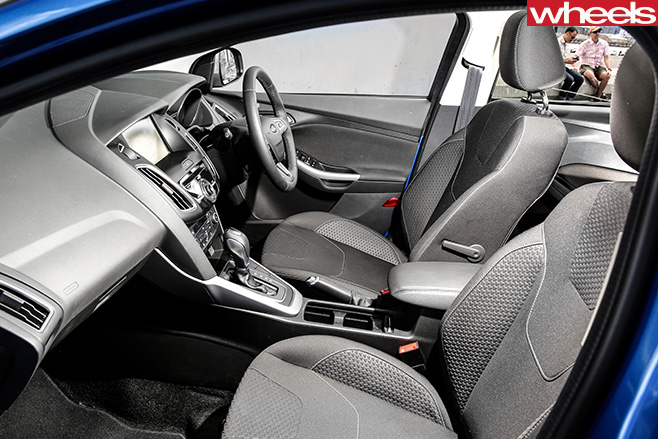 Along with more grunt, the $23,390 Focus Trend manual base model also gains sat-nav, a reversing camera, touchscreen multimedia and idle-stop tech. If you choose the newly conventional auto for $1000 extra (‘Powershift’ was $2200 extra), the net increase from old to new is just $100. Ford Australia is serious about winning. 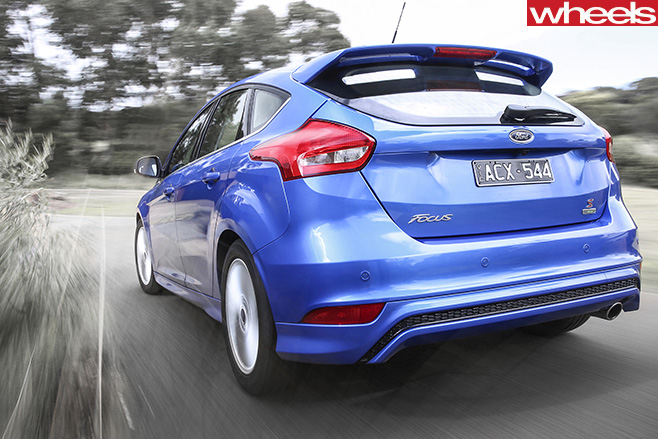 Speaking of which, the LZ Focus is probably the Blue Oval’s most competitive small-car proposition since the brand’s 1980s heyday and represents the company’s greatest opportunity/challenge.

Luck, for a change, is on Ford’s side. No stranger to controversy of late, Volkswagen is embroiled in a global diesel emissions cheating scandal that not only tarnishes the Golf but also threatens to derail the German giant. Mistrust hangs over our 2013 Car of the Year winner like the fumes from the brand’s so-called Clean Diesel TDIs. In which case, there’s never been a better time for rivals to capitalise on Wolfsburg’s monumental mistake. 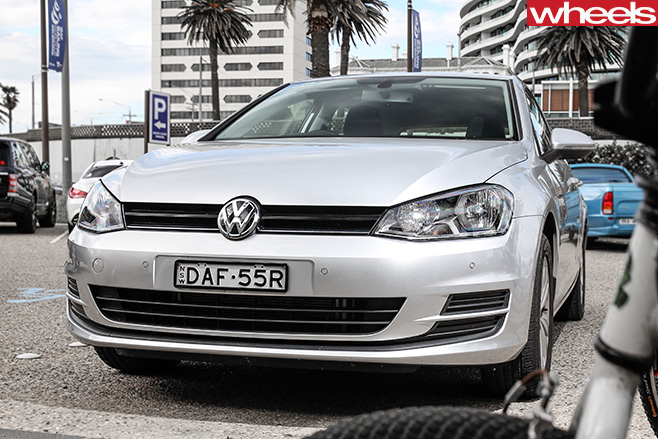 Of the trio, only the Golf also offers a range of driver-assist safety options such as Autonomous Emergency Braking (AEB) at our sub-$30K price point, further underlining Volkswagen’s tech savvy. 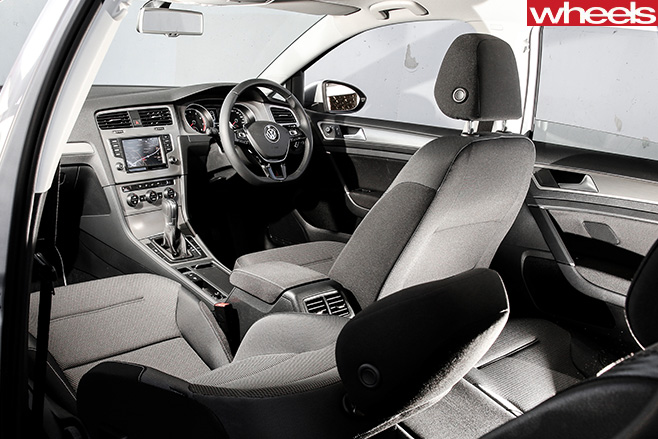 With all that in mind, which Corolla variant to test? Confession time. We had visions of the classic 1986-89 AE82 Twin Cam slingshot when requesting the top-spec ZR (from $28,990), unaware that the $25,490 SX auto is visually identical (boasting the same surprisingly effective bodykit, criss-cross grille and cool 17-inch alloys), while also featuring paddle shifters, sat-nav touchscreen and sports seats. Bargain. The ZR’s extra $3500 brings dual-zone climate and keyless entry/start, as well as features that aren’t found in the others – an alarm, bi-LED headlights, heated and folding mirrors, leather trim, heated front seats and electric driver’s lumbar support.

A tale of three autos

That’s right, folks – with CVT, dual-clutch and torque-converter trannies here, this is as much a test of small automatics as anything else. 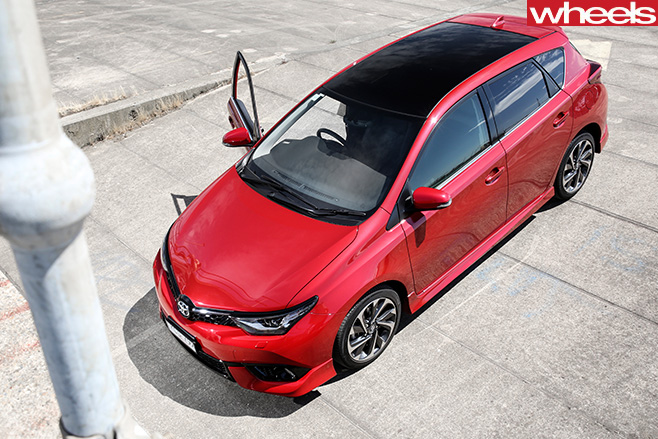 Why Toyota chooses to treat Australia as a backwater by fitting a torsion-beam rear-end instead of the Euro-market Auris version’s multi-link set-up (matching the others) in its sporty flagship is a mystery. Then there’s the fact the ZR offers the group’s sole naturally aspirated engine – a 103kW/173Nm 1.8-litre four that debuted with the closely related previous-generation Corolla nearly 10 years ago.

Predictably, in this downsized turbo company the Toyota feels dated. The 2ZR-FE twin-cammer is tuned to feel terrifically responsive off the mark, with a fast and flowing torque delivery across most urban speeds, accompanied by a typically ultra-smooth CVT action. At 100km/h the tacho is barely touching 2000rpm. If only taxi journeys were this effortless. 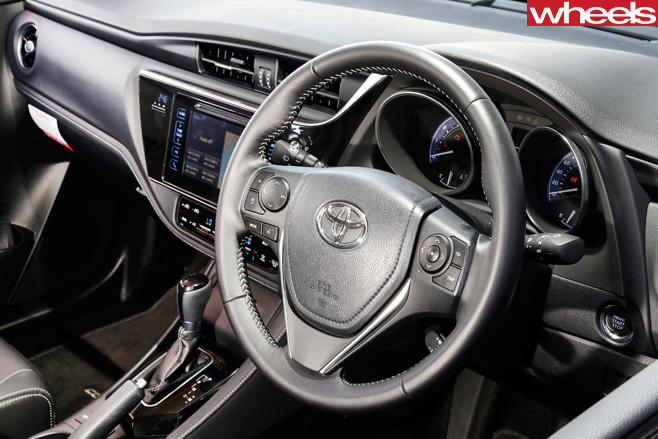 Plant the throttle harder, however, and the 1798cc atmo four starts to sound loud and strained, with more mechanical noise but little of the performance punch that the boy-racer skirts and spoilers promise.

At freeway overtaking speeds, Corolla’s engine starts to run out of puff (and refinement) as the others are streaking away. The numbers say it all. Ten-dead was the best we could coax to 100km/h, while 17.3sec to 400 metres is a whole second behind the hard-charging Focus. As with the rest of the group, the trannie shifts up even in manual mode, making the paddles seem a waste when the CVT is always calling the shots. 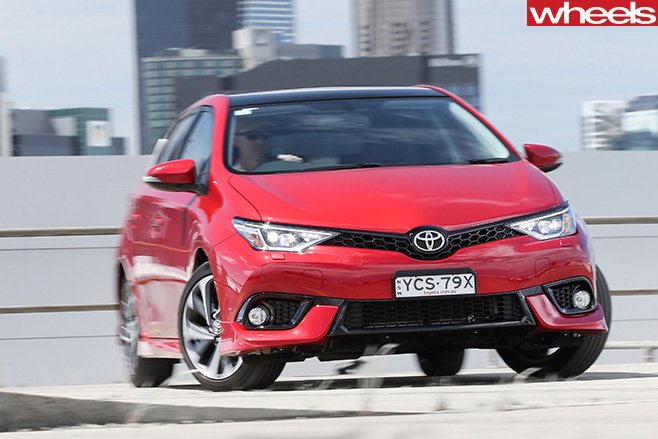 Toyota’s improved fuel consumption claims do at least materialise, with an 8.5L/100km test average (against a stated 6.1), just behind the Golf’s 8.1L/100km (5.4 officially), and a whopping 1.5 litres less than the thirsty Ford (10.0L/100km against 6.2 claimed). It ought to be noted that each car exceeded 165km/h on several occasions during performance testing at the dragstrip, though to get there the tardy Corolla almost had us braking into the sandpit at the end of the straight.

On paper, you’d expect the Focus’s 40kW and 40Nm advantage to obliterate the 92kW/200Nm Golf, but a 150kg weight penalty almost evens things up. We wonder how the Wolfsburg Kid would’ve fared with more than its barely run-in 1100km on the odo, against the Ford’s 5000km.

Rawer and rortier than either of its rivals at take-off, the latter’s lauded Ecoboost 1.5 charges energetically up through the gears. While the Focus seems faster and more frenetic than its disappointing 8.8sec 0-100km/h result suggests, a slight yet persistent gruffness does take the shine off its appeal somewhat. And that thumb-operated manual gearshift toggle feels as alien as ever to operate. Lose it, Ford. 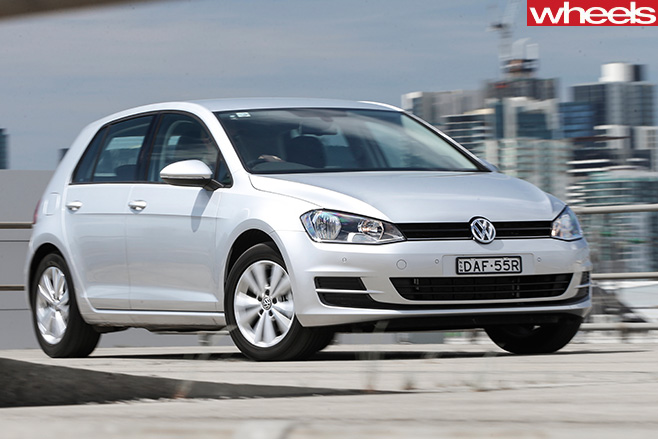 The opposite applies to the Golf, which is strong, ultra-slick, eerily quiet and remarkably muscular once it gets over the DSG’s annoying initial hesitation at take-off. It’s funny how that is in stark contrast to the Toyota CVT’s laggy responses at higher speeds. Ultimately, the Volkswagen’s drivetrain is defined by a Teflon-like sheen, as if everything is lubed in silicone. The faster you go, the slicker and smoother it seems. As a result, the 92TSI leaves the others way behind for ‘premium-ness’.

It also sets the handling and ride benchmarks, with consistent, precise and responsive steering that manages to skilfully filter out unwanted feedback without sacrificing feel. Backed up by an eager and agile chassis, the Golf corners with cracking poise and control, soaking up bumps with exceptional quietness (though the tyres are 16s compared to the 17s of the others). It’s an ultra-composed handler that never puts a single foot wrong dynamically. 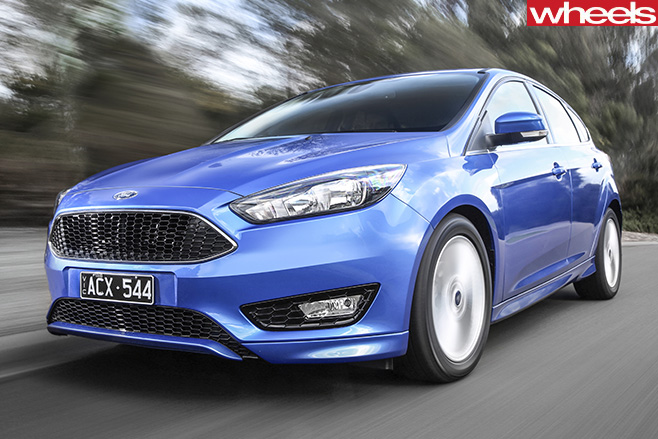 In Sport guise at least, the Focus trades towering consistency for bouts of shining brilliance. If you’re familiar with previous iterations, the electric steering’s newfound lightness just off-centre might sound devastating. It seems Focus’s always-on turn-in sharpness has vanished. Yes, we cursed the Cologne-based engineers. However, press on at slightly higher speeds and both the connection and crispness return, in a bigger and ultimately better way, allowing the keen driver to really have some fun, without the nervousness of old. Sure, the suspension is altogether noisier compared to the supple and silent Golf, but the Focus’s ability to smother all manner of surface irregularities is remarkable, thanks to its disciplined, long-travel springs and dampers.

And the Corolla? Aided by a set of quality Michelin 215/45R17 tyres, the ZR proves surprisingly fluid and flat in its handling composure, carving through corners in a safe and predictable manner. But there is a detached, steering-by-numbers sense to the Toyota’s dynamic dialogue, so you don’t ever feel as connected to the experience. And if the bitumen starts to deteriorate, so does Corolla’s comfort, with the ride becoming fidgety and unsettled, accompanied by plenty of road noise intrusion. 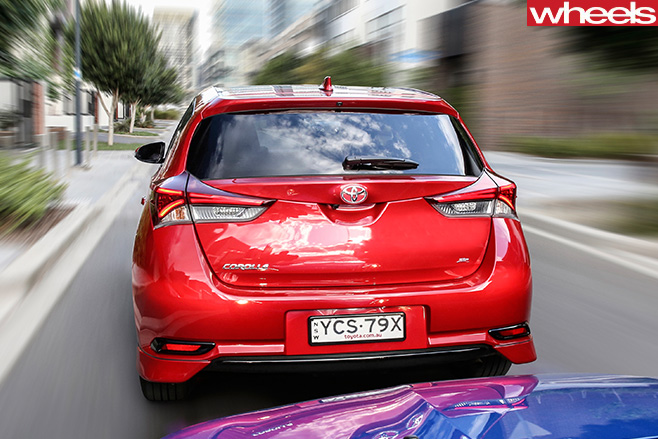 If the Golf’s superior performance, economy, handling and ride aren’t enough, its lush interior hammers home its breathtaking competence. It is the roomiest, airiest, most inviting, best for perceived material finish, greatest for adult rear-seat comfort, and the only one with a height-adjustable front passenger seat and rear air vents. We’d like to see a design that’s a bit more adventurous, though.

The rather funky Corolla, in contrast, is proudly Japanese-modern, simple to navigate and quite appealing from the front seat, but – like the spacious Ford – not in the Golf class as far as rear-seat accommodation is concerned. All have large and practical boots, with low loading lips, but only the Corolla includes a full-size 17-inch spare.

Is this as good as it gets?

Despite all the controversy surrounding Volkswagen, the Golf 92TSI Comfortline easily remains at the top of its game, perhaps the best all-round new-car buy in the world today. Three years on from its international launch, the Mk7 is still astoundingly complete, and remarkable value for money.

The facelifted Focus is a fine effort, with pricing and positioning reflecting Ford’s desperation to become relevant to Australian consumers again. What it lacks in polish is more than made up for in performance, dynamics, comfort, equipment levels, personality and charm. It has probably the best automatic gearbox from a long-term ownership proposition, but the LZ Focus is heavy, relatively thirsty and feels like it has merely caught up with the previous-gen Golf VI, rather than eclipsing the Golf VII. 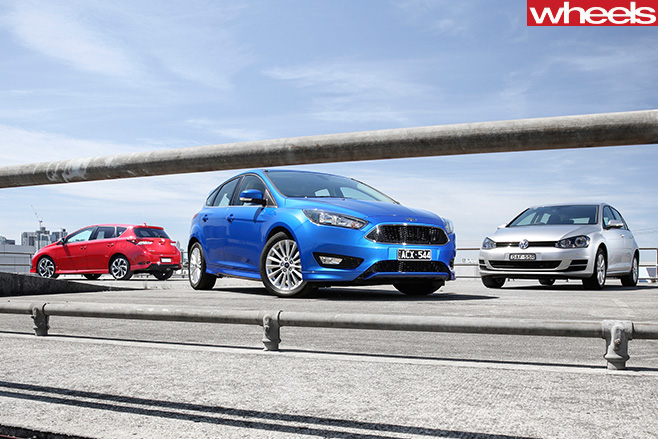 The evergreen Toyota comes third, but isn’t shamed in this company, playing to its traditional strengths (ease, efficiency, reliability, resale) while clothed in a sporty, pseudo-Lexus package. This is probably the most competitive Corolla for 30 years. As a ZR, however, it’s a 6.5/10 performer, wilting a little when you want to press on, so it’s largely an illusion of athleticism rather than the personification of genuine prowess.

The latest Focus really is a cracker, though. Volkswagen, Toyota and others… you are on notice. Yet, despite the Ford’s driver appeal, Golf remains the small-car sweet spot.