Is the lid lifted on the next-generation Wrangler? Internet pundits definitely think so, though we’ll forgive you if you have trouble telling this car apart from its predecessor

Is this the fourth-generation JL Jeep Wrangler? Ask Jeep’s PR people and the response is ‘no comment’, but according to the online forum that posted these images, they’re the real deal.

But if your site is called JLwranglerforums.com, of course you’d say that, wouldn’t you? As they say, any publicity is good publicity.

Read next: One star safety rating for Jeep Wrangler

That said, what’s shown is certainly believable. Two grainy black and white photos depict what appears to be the next generation Wrangler Unlimited four-door, with doors and three-piece hardtop both mounted and unmounted. The overall shape is unmistakeably Wrangler, but the closer you look the more differences you’ll find.

That deep sheetmetal contour running under the glasshouse is the most prominent change, but there’s also a reprofiled seven-slot grille with headlamps partly inset into the outer slots, quarter panel air vents to reduce drag generated by the front wheelwells, new bumper designs and separate hinges for the fold-down windshield. 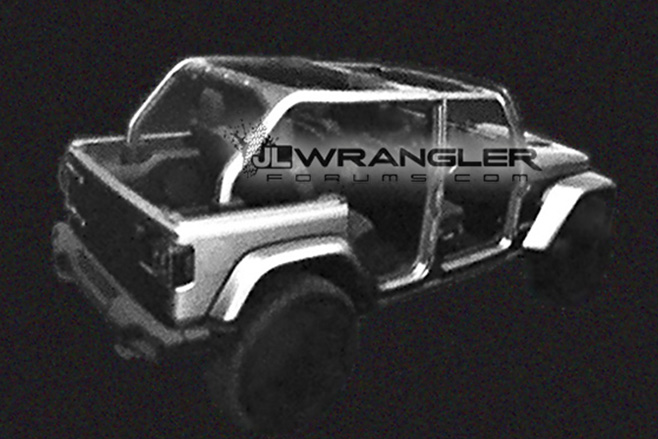 That windshield is also raked back further than the current model, which, combined with the drag-reducing fender vents, should help Jeep achieve its stated goal of making the Wrangler more fuel efficient. Partial aluminium construction is expected to be employed on the new Wrangler as a thirst-abating measure as well.

The car depicted is also said to represent the top-shelf Rubicon variant, which explains its aggressively vented bonnet.

But that aside, the rest of the Wrangler recipe hasn’t been messed with. Chunky door handles, exposed hinges, a beefy integrated roll cage, clamshell bonnet with external latches, separate mudguards and that iconic two-box silhouette are still very much present and accounted for.

After all, with a reputation built on ruggedness and go-anywhere capability, why would Jeep want to change what is still a highly successful formula?

There are no huge surprises shown here, but then again we weren’t expecting many. That said, until Jeep themselves release their own imagery we’ll be treating this one with a healthy dose of scepticism.