Kia Australia has announced pricing and specifications for its freshly-updated Sportage mid-size SUV range, with the 2018 model now more feature-rich and boasting a newer locally-developed suspension tune. It’s not simply a case of tweaked bumper plastics – though it receives attention in that area too.

A new variant has also been added to the lineup, with the previously petrol-only Si Premium grade now receiving a diesel AWD option. The rest of the range remains in place, however no variant has escaped the update without undergoing a price rise.

Price increases range from $1000 for the entry-level Si petrol (now $29,990) to $2500 for the SLi diesel (now retailing at $42,190). They’re sizable increases, however Kia is banking that improvements to standard specification – especially in the area of safety – will offset the price hike.

Previously only available on higher-spec models, autonomous emergency braking (which detects and reacts to pedestrians as well as vehicles) is now standard range-wide. It’s joined by lane keep assist and a driver fatigue warning, as well as a self-dimming rear view mirror, rain-sensing wipers and high beam assist.

Illuminated vanity mirrors were previously omitted from the base Si but they’ve been added in for 2018, along with a new 17-inch alloy wheel design and dual-zone climate control. In the base Si, the infotainment touchscreen still measures 7 inches across, but now boasts a faster-responding screen and updated software for enhanced usability.

All other variants score a bigger and flashier 8-inch display, also with new graphics and smartphone-like screen response, along with a premium 8-speaker audio (rather than the Si’s 6 speakers), digital radio and built-in satellite navigation. No matter what screen is equipped, Android Auto and Apple CarPlay phone mirroring is standard.

Stepping up to the Si Premium also nets 18-inch alloys with a new spoke design, as well as front parking sensors and LED daytime running lamps.

In addition to the above, new features for the SLi grade includes an electronic parking brake (which also brings a reprofiled centre console), adding to the leather upholstery, power-adjustable driver’s seat, keyless ignition, privacy glass and LED tail lamps already offered on that variant.

For all models, the Sportage’s front and rear bumpers have been reshaped to bring a more assertive look to its tail and snout, while on the inside the changes are more subtle. Besides the new infotainment package and handbrake-less centre console of the SLi and GT-Line, there’s just some minor tweaks to the steering wheel trim to separate it from the outgoing model. 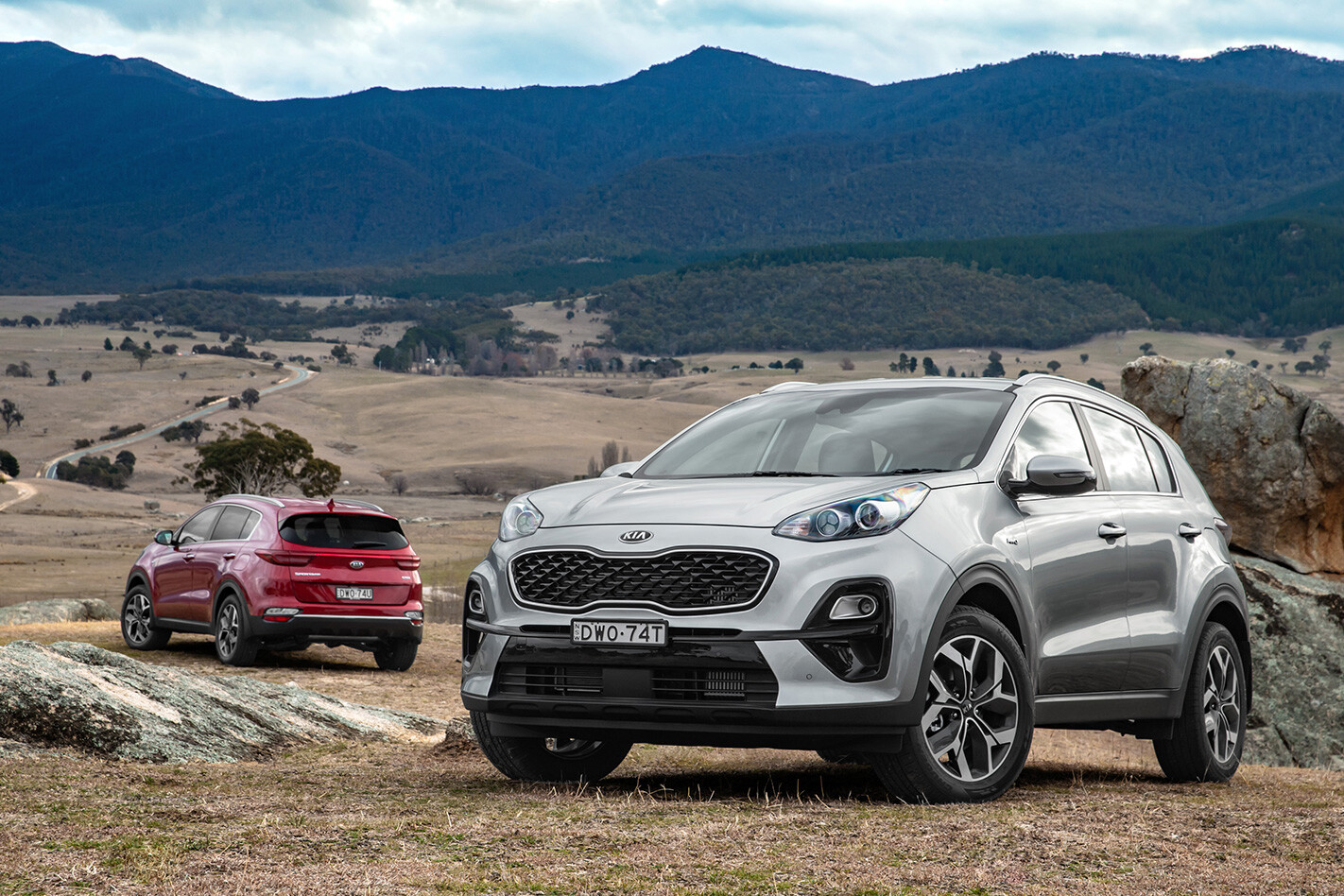 The big news under the bonnet is the addition of an eight-speed automatic for diesel-powered Sportages, which sees a 0.4L/100km reduction in average fuel consumption that takes it down to a miserly 6.4L/100km figure. That’s despite there being no changes to the 2.0-litre diesel’s 136kW/400Nm outputs, and which also remains an AWD-only driveline.

On the petrol front there are no changes to outputs, fuel consumption or gearbox offerings. A 114kW/192Nm 2.0-litre petrol remains the mainstay motor and takes power to the front wheels via a six-speed automatic, while a 135kW/237Nm 2.4-litre petrol continues to be exclusive to the GT-Line grade and drives all four wheels through a six-speed auto. Kia Australia says it won’t budge from its strategy of limiting an AWD petrol configuration to the expensive GT-Line variant.

Chassis updates have also been applied, with minor geometry alterations for the rear suspension and new bushing and bearing kinematics at both front and rear delivering better compliance, vibration isolation and handling. Kia’s local tuning department has also fettled the suspension settings for Australian conditions once more, using a unique combination of spring rates, swaybars and damper valving.

The updated Sportage’s steering ratio is also slightly tighter than before, with other hardware changes to the rack hardware delivering greater precision to steering feel.

The updated Sportage is now on sale, with retail pricing as follows and price movement noted. National drive-away pricing has been applied to the Si Premium grade as well, and is listed in brackets: