The 2018 Mazda 6 has undergone a radical makeover five years into the midsize family car’s lifecycle that brings a raft of changes, including a turbocharged engine for more expensive models.

The range retains its mix of normally aspirated 2.5-litre petrol and twin-turbo 2.2-litre diesel engines, with the petrol mill growing slightly in performance but patching on extra fuel-saving technology, and the diesel making a big leap in both performance and fuel economy.

But the headline act is a turbocharged version of the 2.5-litre engine that’s lifted from the larger, 2017 Wheels Car of the Year-winning Mazda CX-9 people mover. It’s the first turbo engine in the 6 in more than a decade, and transforms what was a flexible and somewhat conservative family car into something that’s now also quite fun to drive.

The four-variant, three-engine Mazda 6 range now looks very different. The front has changed from the wing mirrors forward, closely following the design of the Mazda Vision Coupe concept unveiled at the 2017 Tokyo motor show. Down the rear, the sedan is also very different, somehow giving the illusion the car sits lower and wider than before.

Inside, there’s a huge change. The seats are new and cut to a better fit, the pop-up head-up display has gone and in its place is a projector version, and the dashboard is completely overhauled, featuring a much cleaner look and outer air vents that extend into the doors, giving the impression that the interior is much wider than it really is. 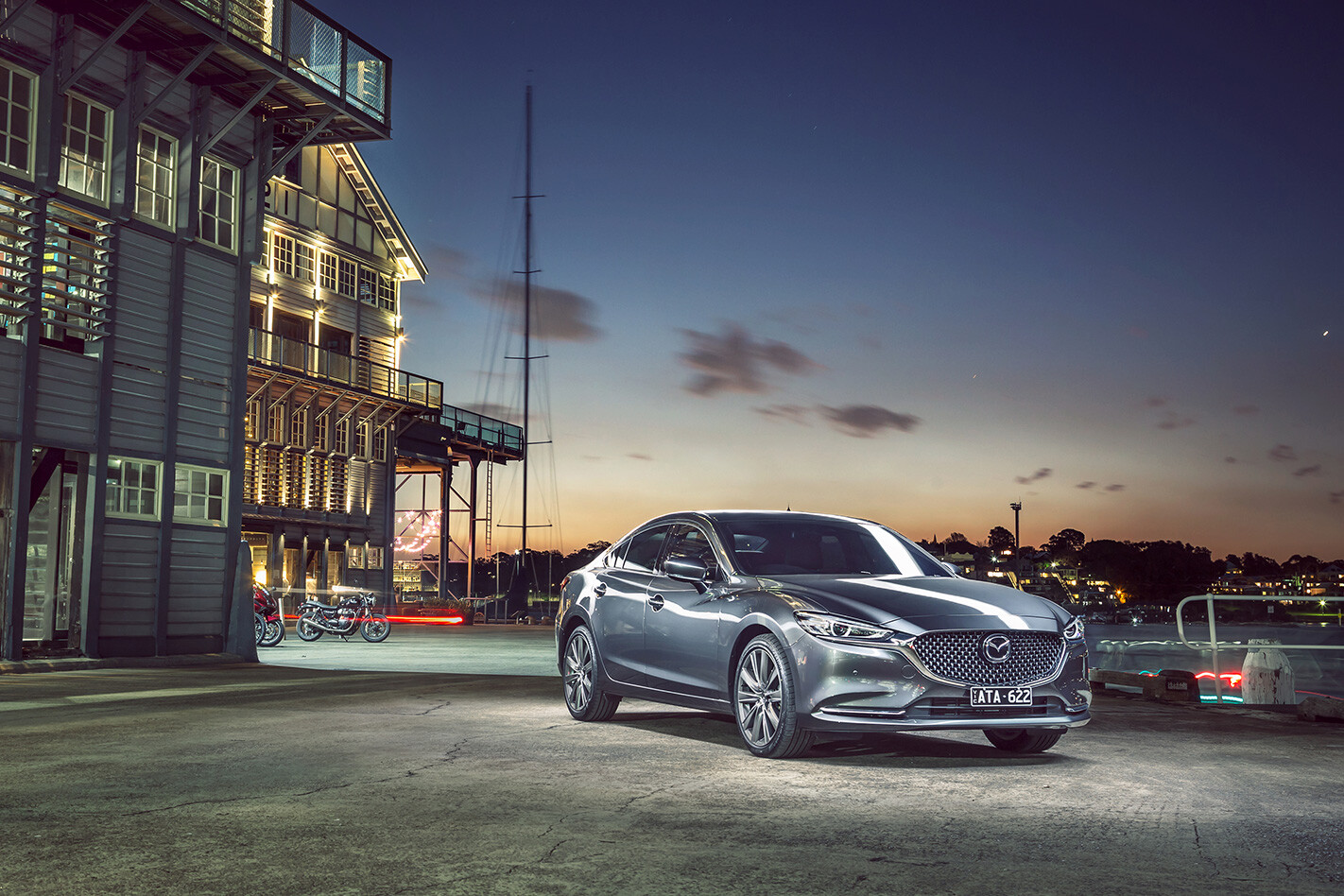 The range still kicks off with the base 6 powered by the carryover normally aspirated 2.5-litre four-cylinder engine, but with a 2kW and 2Nm lift to its outputs to 140kW/252Nm.

The front of this model is now fitted with active shutters in the bumper that close off and push airflow around the car when cooling isn’t needed, and cylinder deactivation, saving on fuel use.

With that, the base Mazda 6 will now use 7.0L/100km – up 0.4L/100km compared with the previous model – on the combined cycle as Mazda makes the switch to using fuel numbers that more accurately reflect what happens on the road, and not in the lab.

All versions come with the carryover six-speed automatic.

Mazda has also made significant changes to the amount of noise that filters inside the Mazda 6’s cabin – a black mark against the previous generation of the midsize family car – and also to the way it drives - you can read about that here.

The entry-level Sport, fitted with the atmo 2.5-litre engine, remains at $32,490 – the same price as the outgoing model. Standard kit runs to: 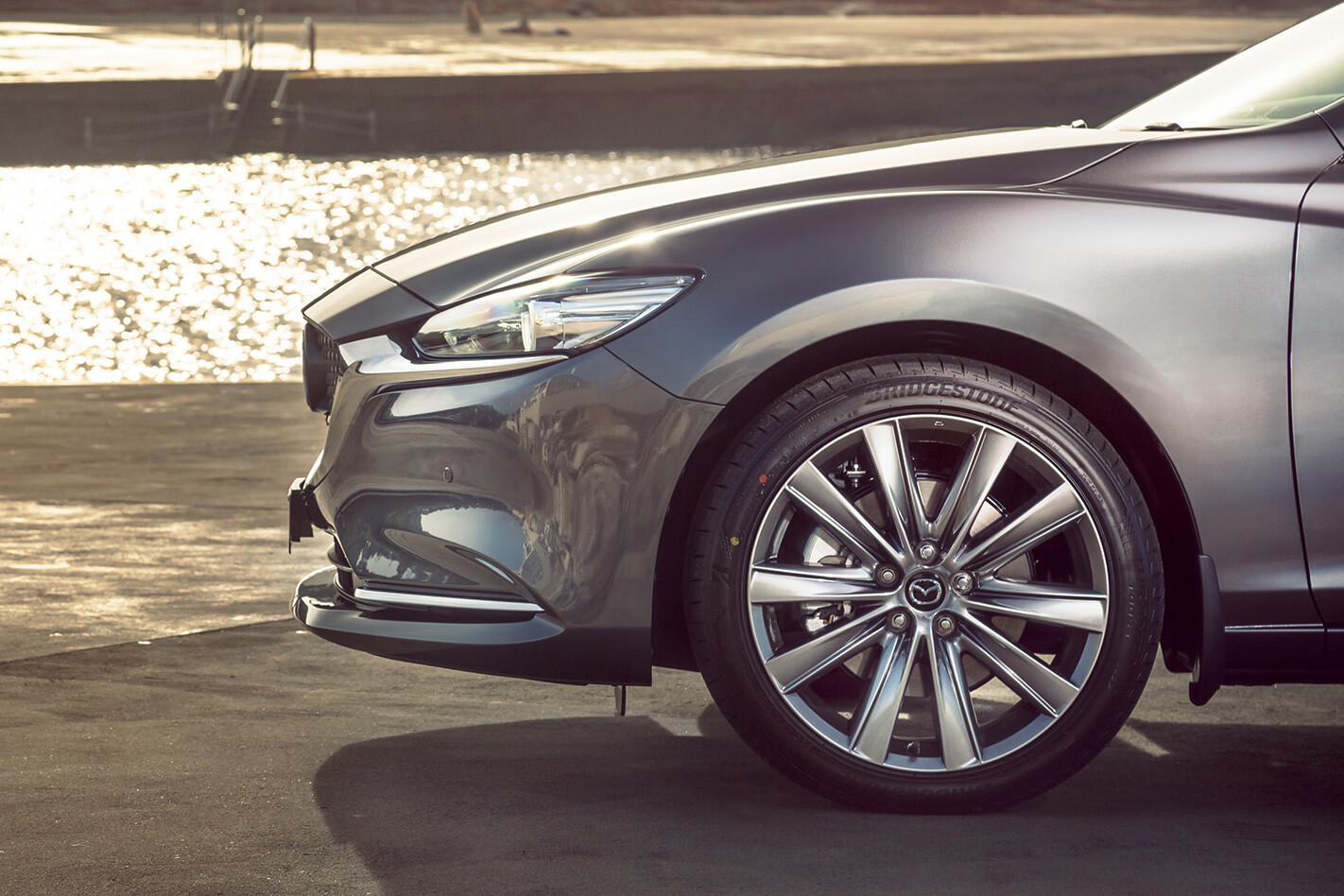 Standard safety other than the six airbags includes:

The Sport also comes as a $1300 more expensive wagon that, unusually, has a slightly shorter wheelbase than the sedan version. It adds a rear wiper, load bay cover, cargo net, a rear lip spoiler and roof rails over the sedan.

The $43,990 GT is the first variant to introduce the new turbocharged petrol four-cylinder as an optional powerplant to the diesel. It represents a $1300 rise over the former entry price to the model grade, but you do get a significantly richer 170kW and 420Nm of performance. Over the Touring, it brings:

The range-topping variant is the Atenza, available with either the turbo petrol or diesel engine and priced from $47,690. It gets a markedly different-styled overhead console, but also adds over the GT:

All variants come with the $1300-extra wagon option.