THE next-generation Mazda CX-5 has been teased ahead of its world debut at next month’s Los Angeles Auto Show.

The narrative that accompanied the image was just as vague, with Mazda saying it has further refined its every design element of its popular crossover SUV, taking “the ‘KODO - Soul of Motion’ design concept to a new level … with a powerful combination of sophistication and strength”.

‘Refined’ usually means subtle changes and as recent spy pics suggest, Mazda appears careful not tamper too much with its styling, with design cues likely taken from the recently launched second-generation Mazda CX-9. 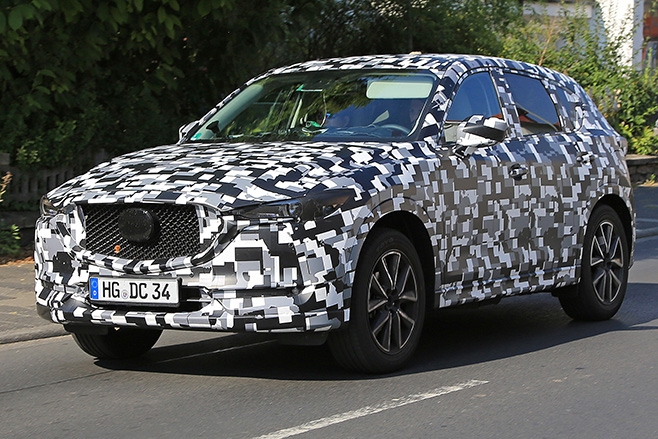 Some of the noticeable features discernable from the spy pics and the latest official teaser image are sharper headlights and grille treatments, a longer bonnet, deeper side windows for better vision, a more pronounced rear hip line, sleeker tail-lights, and a tailgate featuring the CX-9’s concave surface treatment.

The new KF series CX-5 will also share the seven-seater’s SkyActiv underpinnings and chassis advancements including improved sound-deadening measures, to help quell the road noise and vibration issues associated with the current model.

It’s expected to be powered by improved versions of the current 2.0-litre and 2.5-litre SkyActiv-G four-cylinder petrol units along with the somewhat quieter 2.2-litre SkyActiv-D turbo-diesel that will be under the bonnet of some MY17 Mazda 6 variants.

Expect a heap of new driver assist technology to make its way into the CX-5 range, too, including AEB-R – Autonomous Emergency Braking in Reverse, which stops the car while you’re reversing if it detects something in or crossing its path.

Entry pricing is expected to remain below $30,000 with Mazda keen to remain a leader in the hotly contested mid-sized SUV segment against the likes of the upcoming next-gen Subaru Forester, Toyota RAV4, Honda CR-V, Mitsubishi Outlander, Volkswagen Tiguan and Renault Koleos.

Mazda is expected to launch the new CX-5 at Los Angeles on November 16.