Toyota’s fifth-generation RAV4 mid-size SUV has arrived in Australia, with a range of 11 individual variants spanning from $30,640 for the entry-level GX 2WD petrol manual, right up to $47,140 for the RAV4 Edge AWD flagship.

The Toyota RAV4 range structure consists of four grades, GX, GXL, Cruiser and Edge, with three engines spread between them. The mainstay motor is a 127kW/203Nm 2.0-litre naturally-aspirated petrol four-cylinder, borrowed from the Corolla, which is available with a six-speed manual or CVT automatic in the GX grade, and a CVT by default in the GXL and Cruiser 2WD variants.

Available only in front-wheel drive form, the 2.0-litre petrol consumes a claimed 6.5 L/100km on the combined cycle with the CVT auto, and 6.8 L/100km with the manual.

The GX, GXL and Cruiser are all available with a hybrid powertrain as well, which marries a 2.5-litre petrol/electric engine with your choice of front-wheel drive, or an electric all-wheel drive setup that powers the rear wheels via a dedicated electric motor. In front-drive form the combo makes 160kW, with the AWD providing 163kW, while claimed average fuel consumption comes in at 4.7 L/100km and 4.8 L/100km respectively.

At the top of the powertrain hierarchy lives the RAV4 Edge’s 2.5-litre petrol, which comes paired exclusively with a mechanical all-wheel drive and eight-speed conventional automatic. Boasting direct- and port-injection along with variable valve timing, it generates 152kW and 243Nm and drinks a claimed average of 7.3 L/100km of petrol on average.

The Edge’s AWD driveline also boasts a number of terrain modes, allowing the engine/transmission performance and traction control calibration to be tailored to mud, sand, rock, dirt and snow, should you wish to get your RAV4’s wheels dirty.

All models boast an 8-inch infotainment touchscreen atop the dashboard, while the Cruiser and Edge gain an additional 7-inch screen that replaces the conventional instrument panel in the GX and GXL.

Bluetooth phone and media streaming is standard on all models too, though smartphone mirroring via Apple CarPlay or Android Auto remains off the menu for all RAV4s until a running update arrives toward the end of this year. Thankfully, mirroring will be available as a retrofit for cars sold between now and then.

The base model GX makes do with manual airconditioning, with dual-zone climate control on all other models. All bar GX also receive a wireless phone charger at the base of the centre stack, while audio gear comprises a six-speaker setup on GX and GXL, and a nine-speaker JBL stereo on Cruiser and Edge.

And while the GX and GXL make do with cloth upholstery and manually-adjusted seats (the latter with more premium embossed fabric), the Cruiser flaunts heated front seats with 10-way electric adjustability for the driver. The Edge goes a step further, offering heated AND cooled for both front seats in addition to a power-adjustable driver’s seat.

Both the Cruiser get leathery upholstery, but the Edge’s is a synthetic type for a more hard-wearing interior. The base model GX has a bare urethane steering wheel, while all others receive a leather-wrapped wheel and other softer touchpoints.

While the RAV4 has grown up, it’s also grown out. It’s fractionally shorter overall, but its wheelbase gets stretched by 30mm, and the track – the distance between the left and right wheels – has been increased by 25mm at the front and 55mm at the rear.

That means there’s a bigger box for passengers to sit in, and it’s those in the back that benefit the most. There’s 40mm more space between the driver and front passenger, and backseaters will enjoy an extra 49mm of footwell length compared to the outgoing RAV4.

That dimensional growth also results in a 65mm longer and 50mm wider cargo area, giving a 580-litre seats-up luggage capacity that Toyota claims is class-leading. Decline the option of a full-size spare wheel, and a false floor gives even more stowage space underneath.

In fact, the only dimension that decreases is roof height, now 30mm closer to the deck, but that’s countered by slightly lower seating positions to help preserve headroom. 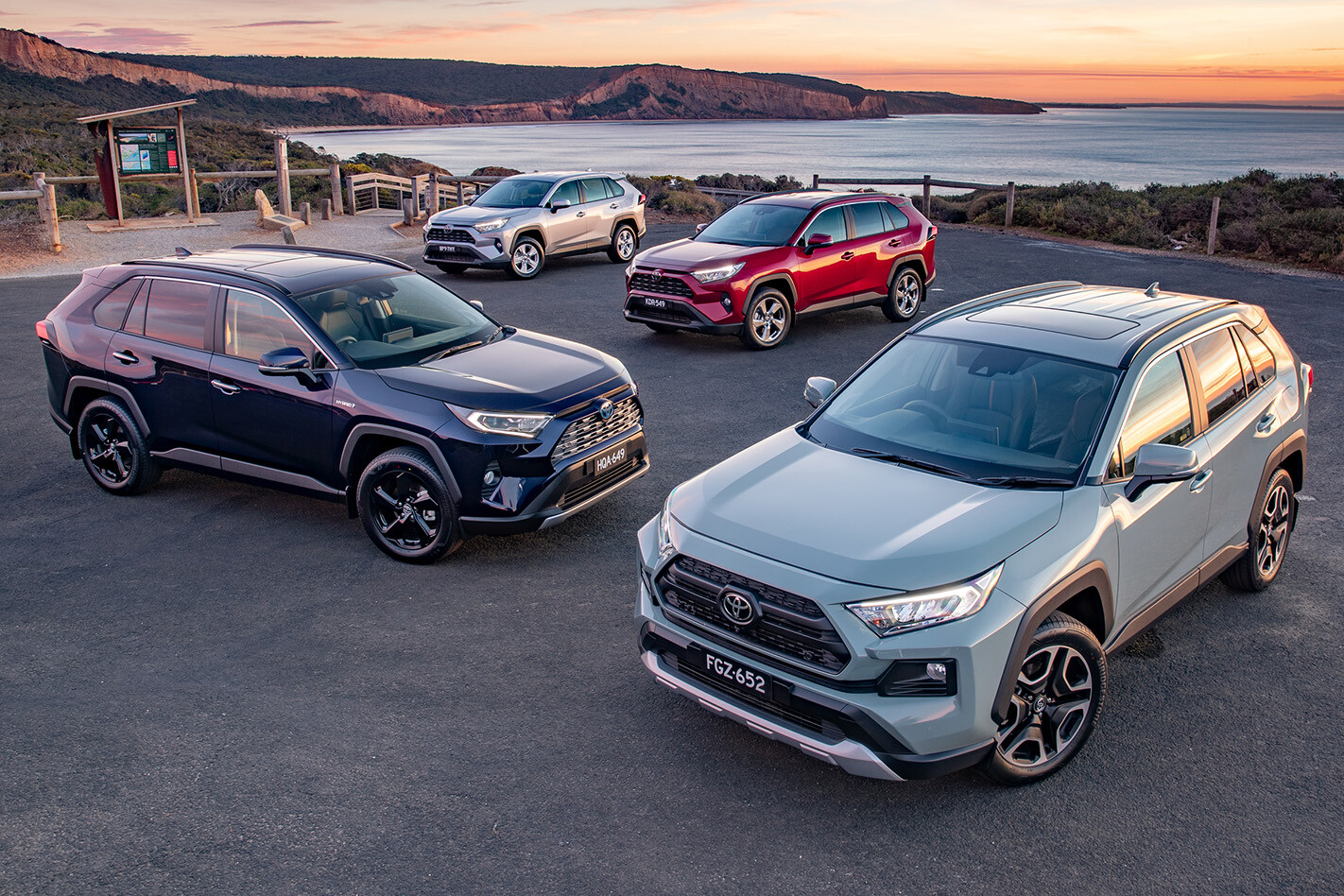 There are some subtle differences across the range, though. The active cruise control in the base GX is capable of detecting and following other traffic at speeds above 40km/h, but disables itself when the car drops below that speed.

All other models get a different system that can operate all the way down to 0km/h, allowing stop-start traffic jams to be negotiated with cruise control taking care of your speed and separation to traffic.

The more advanced active cruise control also brings lane-keep assist, which helps steer the car to keep it within lane markings when cruise control is switched on. That system isn’t available for the GX, given its different cruise control fit-out.

The 2019 Toyota RAV4 range is on sale now, with retail pricing as follows: