Meet the newest addition to the DS line-up, the 4. It sits between the 3 and the 7, and will also take the small French company in a new direction.

The new 4 aims to appeal to two sets of buyers looking for something different from their usual fancy compact hatchback (think BMW 1-series) or vaguely sporty crossover (like the X2 and a fast-growing group of rivals). 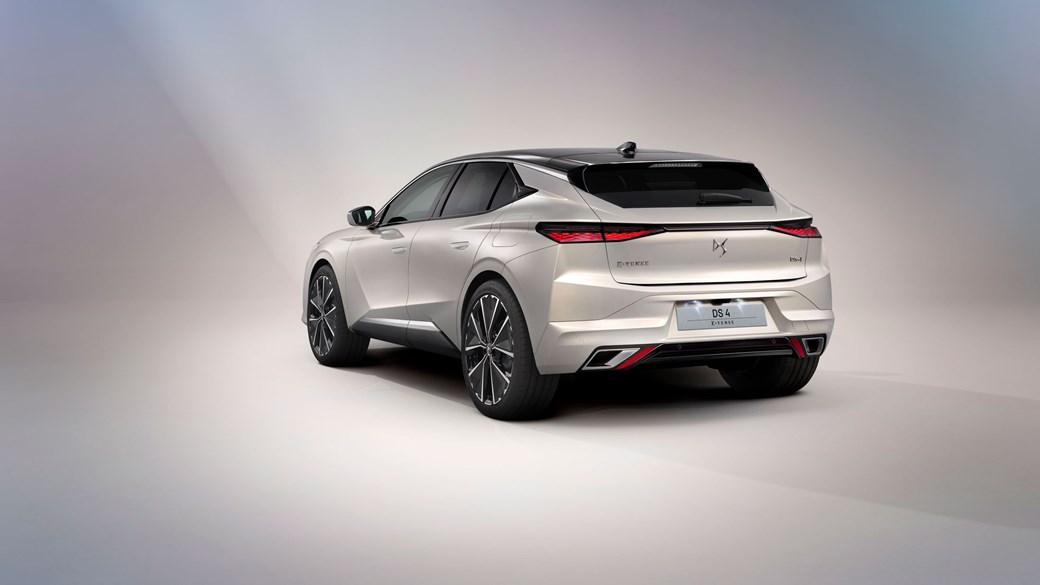 It comes in two main versions, the regular DS 4 and the DS 4 Cross, which uses roof bars and a few design tricks to make it look like it’s beefier and taller, even though it isn’t.

They’re both available with a wide choice of interior and exterior finishes, and there’s also a trim package called Performance Line that DS regards as a separate third version.

Under the skin, there are components shared with many other hatchbacks and crossovers from what was the PSA group, but is now the even bigger Stellantis alliance - which is what the newly merged Fiat Chrysler Automobiles (FCA) and Peugeot Société Anonyme (PSA) supergroup has been named.

For those that don't know, DS is a luxury brand that used to be a sub-brand of Citroen. Kind of like what Lexus is to Toyota.

DS, as ever, is majoring on comfort, style, technology and a civilised ownership experience, rather than worrying about its dynamic similarity to the Citroën C5 Aircross and Peugeot 5008.

So is this the replacement for something?

Not really. The previous DS 4 and DS 4 Crossback, both long discontinued, were essentially tarted-up Citroën C4s. This new 4 is a much more distinctive car with more upmarket ambitions.

It also signals a newly confident look from a brand that has struggled to establish a clear identity.

It will form part of a DS line-up that will eventually stretch to six models. The 3 and 7 are both familiar, the China-focused 9 saloon will go on sale in Europe later this year, and two more DSs have yet to be unveiled.

Precise specification for the 4 has not yet been confirmed, but it’s not the DS way to offer a basic entry-level version. Prices, we’re told, will be competitive against premium German rivals like Audi, BMW and Mercedes-Benz. 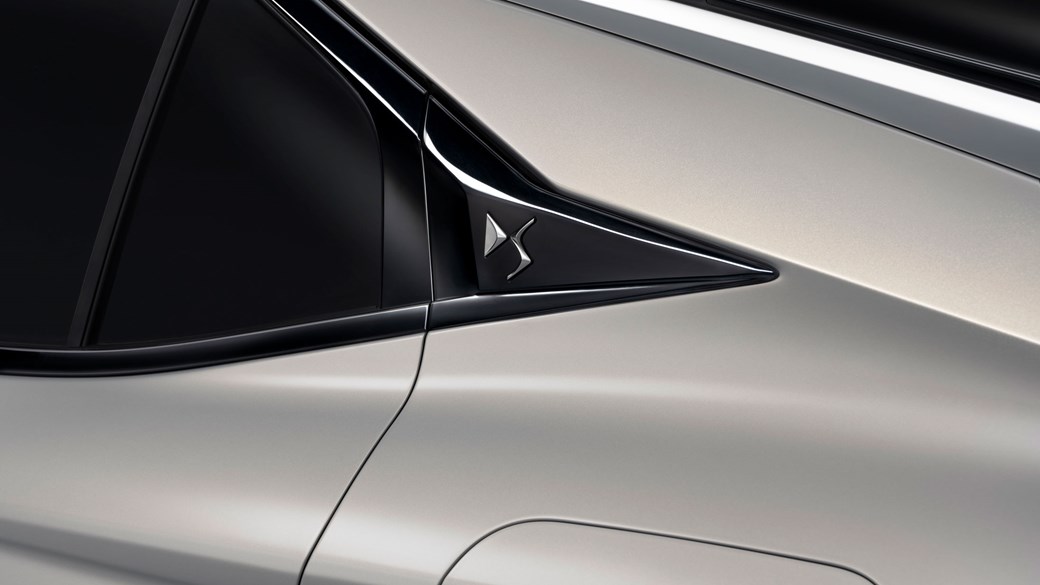 What are the coolest bits?

Look inside for the special sauce. It’s by far the cleanest, least retro and most successful cabin design of any modern-era DS.

Conceptually, it has ‘comfort’ areas – seats, armrests – that are soft and uncluttered, and ‘control’ areas – screens, buttons etc – that, impressively, are very nearly as uncluttered.

This hasn’t been achieved by scrapping all the switches and burying everything in touchscreen sub-menus.

Rather, it’s about intelligently grouping the controls, and making some good calls on what must be a physical control and what can be left to voice, gesture or touch.

So the side air vents are positioned on the doors – not on the dash – next to the window controls, and the central vents are barely visible, so neatly are they merged with their controls in a central blade. 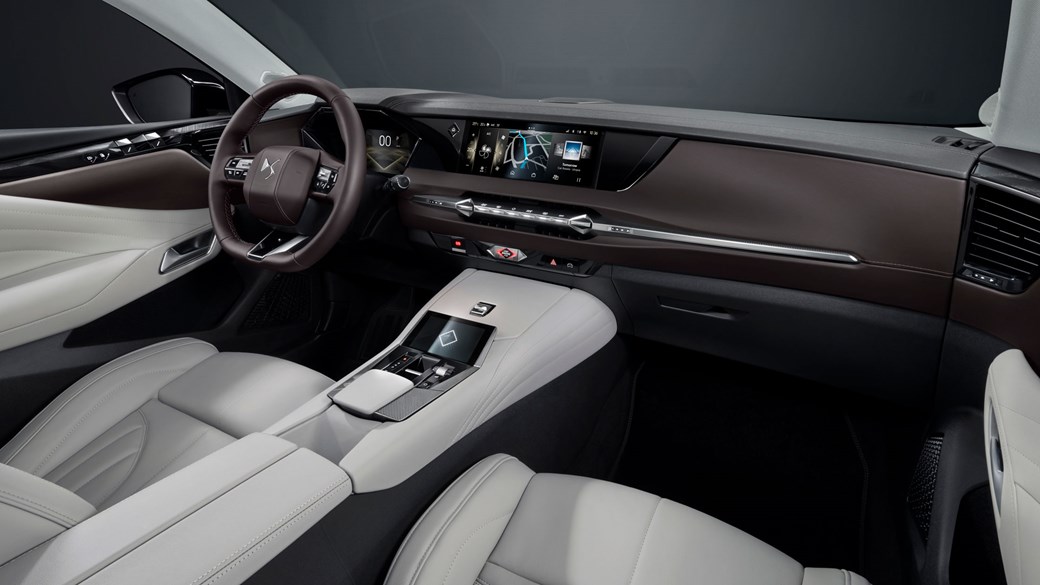 The stubby gearlever (transmission on all versions is by eight-speed auto) sits next to a lower screen that controls some functions, while the higher, bigger central screen can be personalised to prioritise the functions that are most important to you.

There’s an advanced head-up display that DS says is not quite augmented reality, but which nonetheless superimposes important information on the road ahead, moving diagonally with the driver’s gaze.

Night vision is also available, as is sound-reducing acoustic glass – one of many features more often associated with larger, more expensive cars.

The seats are an entirely new design, featuring a shell-inspired outer, with comfort rather than sportiness very much the aim.

The DS 7’s Active Scan suspension system will also be offered, and the 4 debuts a next-generation driver assistance package that combines adaptive cruise control with lane-positioning assistance and the ability to stop and start itself in traffic. It also has long-range blind-spot monitoring and radar at all four corners.

It’s hard to tell how big it is…

Direct comparisons are tricky, because the DS 4 is wide but short and not particularly tall, and it rides on 19-inch or 20-inch alloys, adding to the muscular look. Its dimensions are very close to the Mercedes-Benz GLA, except it's not as tall.

The regular DS 4 has a black roof, while the Cross version has a body-colour roof but gains roof bars and some extra black low down, especially at the back.

This gives the illusion that the Cross rides higher, but the tape measure says otherwise. They’re equally roomy inside.

The third version, Performance Line, majors on black trim, some of it carbon fibre, but the only mechanical difference is an optional advanced traction control system that has modes for sand, snow and ice, as well as Hill Descent Control.

Like many current and future Stellantis products, it uses the EMP2 platform, but the DS 4 has many modifications to allow its unique long-bonnet, sloping-roof, big-wheel silhouette, and to permit bespoke steering and suspension components.

The air-con unit is also more compact than in other EMP2s. Weight has been trimmed by the use of more composite materials and bond-welding.

There’s some design cleverness going on with the grille and rear LED lights, which look more curved than they actually are. The front lights are all-new, featuring bold new vertical double LED strips and thinner directional matrix LED headlights.

Ah, no. DS is very proud of its two Formula E championships, but like the 7 – rather than the 3 – the choice is combustion engine or plug-in hybrid.

The PHEV is a turbocharged petrol four-cylinder plus a single e-motor, with a combined output of 166kW driving the front wheels. Petrols with 95kW, 133kW and 166kW are also on the cards, as is a 99kW diesel.

So what about Australia?

Never say never, especially now that the Stellantis shingle hangs out the front of the PSA building. But given that Citroen and Peugeot are imported privately into Australia by Inchcape - and in moderate numbers at that - it's unlikely that we'll see DS return to our shores after its unsuccessful stint in 2016.

A quick call to Inchcape certainly underlined that, with a firm 'no comment' offered to our line of inquiry.

It's a shame, but it's a brand that is one step too niche for even the eclectic tastes of Aussie buyers.

What do we think?

If everything DS has promised comes to pass, then the DS 4 will be a calm, comfortable, compact family vehicle, where the passengers are taken as seriously as the driver.

The approach seems closer to Volvo’s than to the German premium manufacturers, and DS has gone to a lot of trouble to bring some extra flair and charm of its own.

This story first appeared on carmagazine.co.uk