Hyundai has revealed the full extent of its 2021 i30 N improvements, with an engine retune, weight reduction, brake upgrade and interior enhancements accompanying the previously announced dual-clutch automatic option and slick exterior redesign.

Due to arrive in Australia in the first half of 2021, the facelifted and updated i30 N hatch wears a new look that incorporates sharper LED lighting headlight and taillight accents, revised front and rear bumpers with aerodynamic improvements and fat exhausts bolted into unchanged metalwork.

The fastback shares all of the upgrades except the tail end aesthetic changes including the hatchback’s spoiler which produces useful downforce. It shares the new exhausts however.

But more significantly, there’s genuine performance enhancements to get excited about.

For a start, the 2.0-litre turbocharged four-cylinder petrol engine has been gently squeezed to liberate more torque, with the peak figure jumping by 39Nm to a new maximum of 392Nm. There’s also a small increase of power, creeping up by 4kW to 206kW.

The output boost has chopped two tenths of a second from the i30 N’s zero to 100km/h acceleration with the milestone dash now over in 5.9 seconds. A flattening of the torque curve also improves mid-range acceleration and at the top end too, says Hyundai.

Traction off the line is thanks in part to the carry over limited-slip differential (LSD) but also the addition of new 19-inch forged alloy wheels that wear sticky Pirelli P Zero rubber.

The more skeletal design rims remove nearly 15kg of unsprung weight from the i30 N which will directly improve handling and road-holding along with retuned steering and suspension settings, which is electronically controlled as before.

Customers in other global regions will be asked for extra cash for a new Performance Pack but Australians will be offered the extra performance potential as standard. It includes more powerful brakes with front disc diameter increased from 345mm to 360mm, while the LSD gains electronic control.

Australian auto fans have been getting excited about the introduction of an eight-speed dual-clutch transmission since it was confirmed for the model last year, but the South Korean manufacturer has now offered more details about its function.

As you would expect, paddle shifters are provided behind the steering wheel for manual gear shifting or with the gear selector lever which has been oriented for down-shits by pushing forward and upshifts with a pull back.

The transmission also has three driving programs tailored with a couple of more frivolous modes. Least surprising is the N Track mode which does everything it can to improve lap times but there are a pair of more fun-focused functions.

N Power Shift mode engages when more than 90-percent acceleration is used and does not reduce torque between gear shifts. The result is maximum acceleration and sensation of an extra kick when the next gear takes over.

Finally, the N Grin setting unleashes the maximum power and torque for 20 seconds for peak performance that is more about putting a smile on the driver’s face than outright lap times, says Hyundai.

A raft of new safety gear arrives with the updated i30 N courtesy of the Hyundai Smart Sense suite. New to the i30 N fastback are forward collision avoidance than now detects vehicles and pedestrians/cyclists, and lane-following assistance.

Hyundai has released a handful of images that hint at what was under the wraps of the vehicle our spy shots captured in July, when a prototype of the company’s updated i30 N fastback was spotted testing on public roads.

These latest low-lit images aren’t enough to reveal the full impact of the facelifted i30 N but there’s certainly enough to get excited about.

Not only are the fatter twin tailpipes retained as a production detail, but the new bodykit appears to be as aggressive as previous renderings promised.

The release also confirms the massive skeletal wheels bolted to the disguised Hyundai i30N prototype will be a production feature, too.

According to Hyundai, the 19-inch rims are of the stronger and lighter forged variety and save a significant 14kg of unsprung mass from the i30 N chassis. You can expect the new version to offer even sharper handling and road holding, therefore.

Perhaps more significantly though, when it arrives on Australian turf in production form early next year, the updated i30 N will introduce a long-awaited automatic transmission for the model, with eight ratios and sporty dual-clutch technology.

Pricing for the i30 N DCT is yet to be confirmed but it’s safe to say it’ll be the most affordable eight-speed dual-clutch car on the market – If you want something else fitted with a DCT offering as many gears, your only options are Mercedes-AMG, Porsche and Ferrari.

In fact, to own a car driven by a DCT with more gears you’d have to stump upwards of $400,000 for the Honda NSX, which has nine.

The addition of the automatic i30 N is likely to give local sales of the model a serious lift, which has been popular with Aussies despite only being available from launch in 2018 as a six-speed manual.

The transmission will be a version of Hyundai’s dual-clutch automatic that can be found bolted to numerous other models, albeit with a maximum of seven speeds.

Hyundai has already revealed its N-Line facelifted look for the i30, but this is the first look at the full-fat N design applied to the range-topping high-performance variant. Compared with the mid-range performance i30, the new N will have a marginally more purposeful stance on the road.

The dimly lit front valence (we've tweaked the photo's contrast a bit to improve the view) appears to have the same size and number of air vents and grilles although the N has a different mesh, while at the tail end there’s a more noticeably different bumper with diffuser fins and the bigger exhausts.

There is at least one example of the DCT-equipped i30 N already rolling on Australian roads with the development car we captured below.

Hyundai’s updated i30N has been spotted undergoing testing on Australian roads and while its facelift looks are still heavily disguised, the telltale exhaust note of a lightning-fast dual-clutch automatic cannot be so easily hidden.

Spied lapping Sydney’s suburbs, the prototype i30N is the Fastback variety and in left-hand drive, but the wrapped and padded test car heralds the arrival of production versions in early 2021.

While we’re looking forward to seeing the hottest N’s new look, it’s the pivotal eight-speed DCT automatic that lies beneath which is the really big news for the model. Listen to the exhaust bark captured in our video to confirm the characteristic shifting of a dual-clutch auto.

Since it was introduced in 2018, the company’s first full-fat hot hatch has garnered a solid following, despite its availability only as a six-speed manual, but a performance-focused eight-speed auto is likely to far exceed the popularity in Australia’s auto-prevalent market.

Hyundai Australia has confirmed the enigmatic vehicle is the upcoming 2021 i30 Fastback N and is here for “evaluation and testing by the local tuning team”.

MORE18 models in 18 months in product onslaught for Hyundai

As is the case with all Hyundai models, the i30N has a chassis and suspension set-up unique for the Australian market and tailored for Australian tastes.

When it arrives early next year both the spied sedan-like Fastback and more traditional hot hatchback are expected.

Little is revealed by the test car regarding the new look i30 apart from redesigned headlights that are peeping through the heavy camouflage, picked out by a new V-shaped daytime running light pattern. The light signature confirms that this is the updated version.

However, the car maker has only revealed the facelifted look of the entry-level variants and the mid-range N-Line. The test car rolling around in Sydney still hides the most hardcore version of the update and all the big vents and spoilers we are expecting. 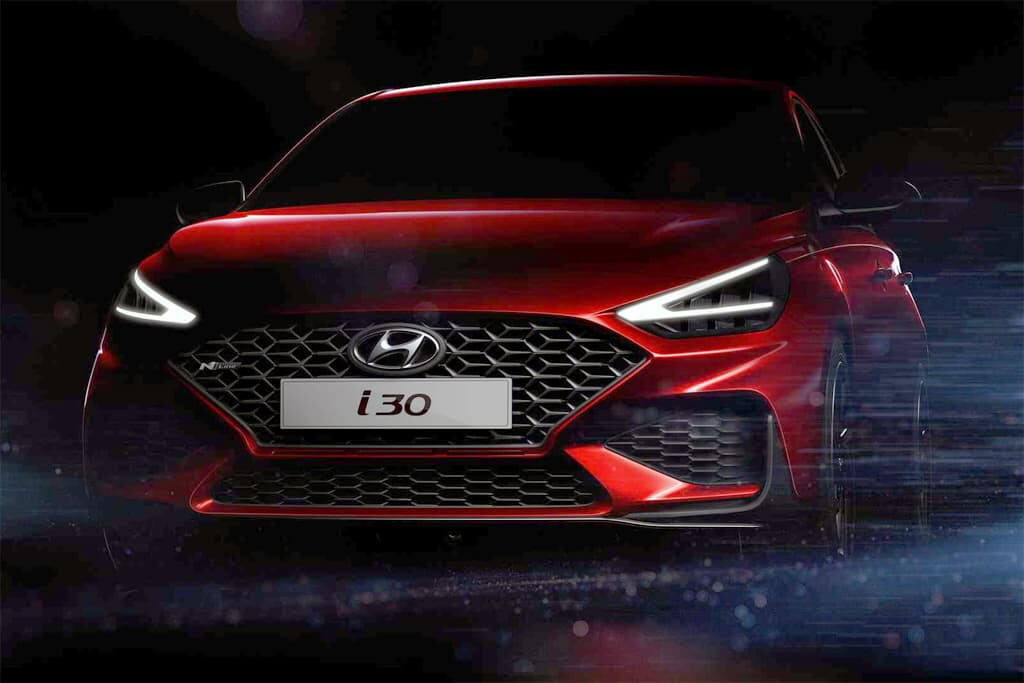 The 2021 i30N is not expected to gain any power from its 2.0-litre turbocharged four-cylinder petrol engine, but excitingly, the new auto transmission makes better use of the 202kW output with 0-100km/h acceleration dipping significantly below the six-second mark.

MOREAn even faster and lighter Hyundai i30N
A number of other enhancements are expected along with the significant redesign and DCT foray.