Following on from the front-on teaser image that was released recently, two new videos of the all-new Land Rover Discovery 5 have been let loose, giving us our best look yet at British 4x4 brand’s most important new car.

Set to be unveiled in full on September 28, the new Land Rover Discovery is shown wearing thin camouflage while driving across varying terrain including sand dunes, rivers, snow and gravel in the Capability Testing video. In the second vid, children belonging to Land Rover employees experience an off-road drive to emphasise the vehicle’s family focus.

The basic shape of the new Discovery is obvious in the videos, though we’ll have to wait until its late-September reveal to confirm whether the model’s trademark stepped roof will continue as expected. 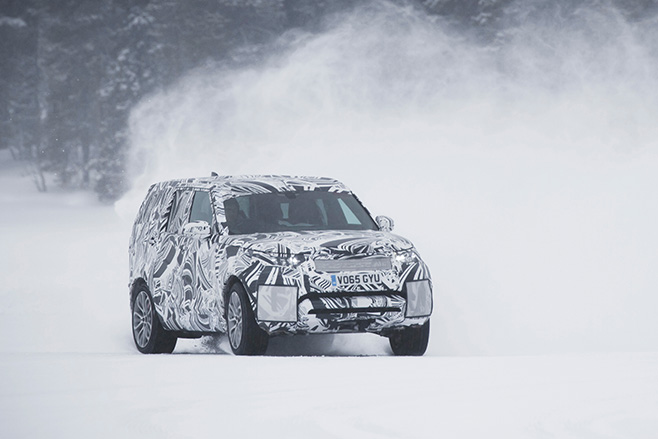 The 2.0-litre four-cylinder petrol engines expand the Ingenium family that started in 2015 with a range of four-cylinder turbo diesels, and are built on a modular system with 500cc-per-cylinder displacements.

Featuring an electro-hydraulic valvetrain, integrated exhaust manifold and a twin-scroll turbo, JLR says the new petrols will offer 25 per cent more power than the engines they replace yet use 15 per cent less fuel.

The engines will be ready for a 2017 introduction in JLR’s Engine Manufacturing Centre in the UK. Performance numbers have yet to be released, however like their diesel-drinking counterparts they will be available in a variety of power outputs and be installed in vehicles such as the Jaguar XE and XF, and Land Rover Evoque and Discovery Sport. 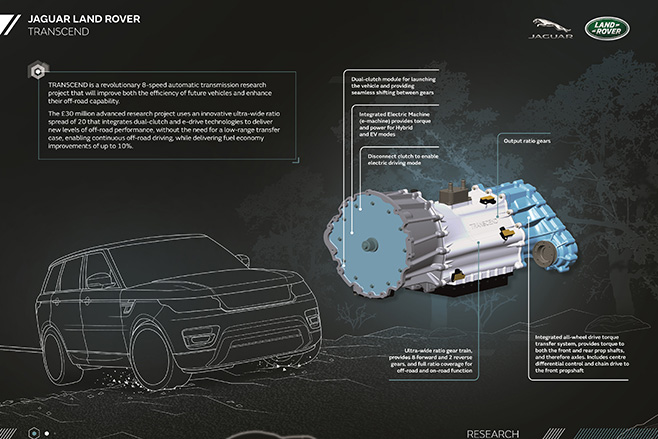 The eight-speed auto uses a dual-clutch system rather than a conventional torque converter, with a wider spread of ratios that dispenses with the need for a dual-range transfer case.

There’s also two reverse gears to aid low-speed rock crawling, while a clutch disconnect allows an electric drive motor to be integrated into the transmission and operate independently of the combustion engine.

Jaguar Land Rover also claims the Transcend gearbox is lighter and more compact than other eight-speed automatics, with a weight reduction of around 20kg and the ability to generate up to a 10 percent improvement in fuel economy.

Jaguar Land Rover says the transmission is suitable for both rear-wheel drive and all-wheel-drive models, however a timeline for its introduction has yet to be announced.