Confirmed to arrive Down Under late this year, the new Volkswagen Amarok has been treated to a powerful V6 turbo-diesel along with new styling and interior features.

The Volkswagen Amarok will get a major update for the 2017 model year in Australia, including a powerful new 3.0-litre turbo-diesel V6, making the German one-tonner the only V6-powered ute in its class.

Volkswagen claims the bigger engine, when paired with an eight-speed automatic transmission, will achieve a combined NEDC fuel consumption figure of just 7.6L/100km.

The new engine will be available in different power levels to suit each of the three drive systems available – rear-wheel drive, 4MOTION (on-demand all-wheel drive) and permanent four-wheel drive. 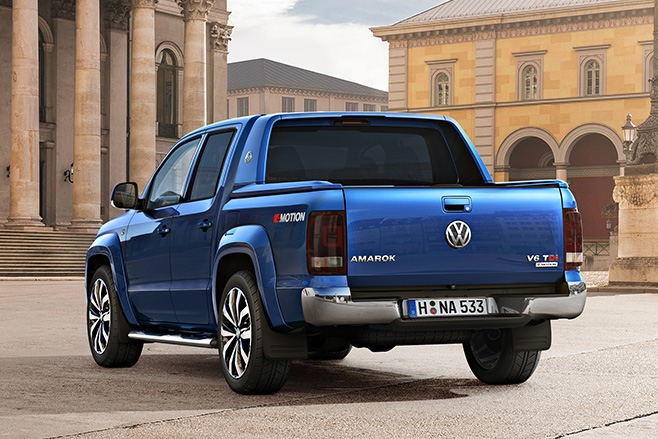 In the top-spec Amarok, the V6 turbo-diesel makes 165kW and 550Nm, which is significantly more than rivals such as the popular Ford Ranger, Mazda BT-50 and Holden Colorado.

The range-topping Amarok consequently gets bigger brakes, but all models in the range will also benefit from VW’s Automatic Post-Collision Braking System.

Volkswagen claims the new model will be able to tow up to 3.5 tonnes, further bolstering its role as a key player in its class since arriving in Australia in 2011.

To be released in Europe in September, a flagship Amarok Aventura model (pictured above) will feature a body-coloured sports bar, 20-inch wheels, LED lighting, bi-xenon headlights, and a reversing camera with Park Distance Control.

Volkswagen will launch the new model in Australia late this year.

Click here to read the full review on the Volkswagen Amarok range.