Passat CC replacement, the VW Arteon, revealed ahead of debut.

The Volkswagen Arteon has been teased ahead of its debut at the Geneva Motor Show next month.

Revealing its nose and rear, the photos of the five-door coupe showcase a handsomely businesslike face (and butt) for the likely Passat CC replacement.

The teaser image shared by the German automaker shows LED headlights fitted to the front chrome grille, with thick silver bars running across its width. The latest interpretation of VW’s current design language, it puts the German brand on a more premium footing than before.

According to the Arteon teaser’s press release, Volkswagen will equip its new quasi-luxe sedan with new features including driver assistance systems “that are typically reserved for luxury automobiles”. 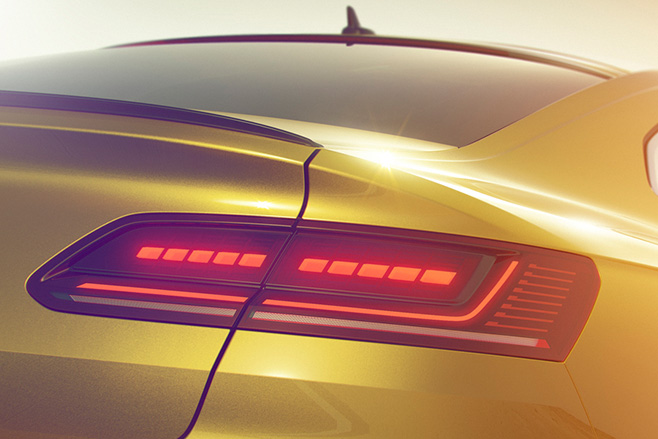 The Arteon will be marketed as a “premium mid-sized” fastback, situated above the Passat in the carmaker’s line-up, and promises a spacious interior.

Speculation that the Arteon will be based on the Sport Coupe GTE Concept revealed at last year’s Geneva Motor Show suggest the new coupe may be of similar size to the popular Holden Commodore, with generous space inside.

Given its expected close relationship to the Passat, we’re expecting to see a similar drivetrain range: the Passat currently carried a 2.0-litre turbo-diesel and 1.8-litre four-cylinder turbo petrol.

If it does follow the Sport Coupe GTE Concept, however, we may even see a plug-in hybrid version.