Mazda's mini sprouts a boot and cements its spot as the class player in the niche light sedan segment.

We seriously thought about posting a review of RM Williams’ finest footwear for this one, because the latest Mazda2 is all about the boot. Having launched the third-gen 2 in hatch form late last year, Mazda Australia has added a four-door sedan to the model mix.

On year-to-date sales, the 2 sits just behind the ‘light’ segment leading Toyota Yaris, and in a bid to grab top spot Mazda has used the sedan launch to introduce a series of upgrades and realign prices across the range. 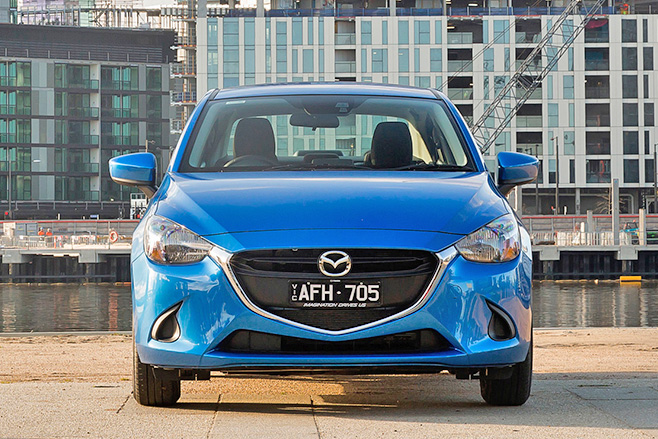 At the risk of stating the bleeding obvious, body-wise, everything from the B-pillar backwards is unique to the four-door. Wheelbase is identical, but overall length is increased by 260mm, all of it going to the rear overhang. No surprise then that the boot holds a whopping 440 litres, a volume closer to a mid-size (C segment) car. By comparison, with rear seats upright, the hatch’s cargo capacity is 250 litres.

Each side of the load area has been carefully sculpted out with rigid plastic inserts, to maximise space, and Mazda claims the 2’s boot will swallow a pair of large (75cm) suitcases or two nine-inch golf bags containing long (118cm) clubs). Eccentrically-shaped gooseneck type hinges also shift the boot lid’s arc higher for easy access.

There are two spec levels; the Neo, powered by a ‘standard spec’ 79kW/139Nm 1.5-litre petrol four, and the Maxx, boasting a ‘high spec’ 81kW/141Nm version of the same unit. Each is available with six ratios, driving the front wheels via manual gearbox or auto transmission.

Spec improvement comes in the shape of standard cruise-control and rear parking sensors for the Neo, without any price increase. A reverse camera plus ‘MZD Connect’ infotainment is added to the Maxx, along with $700 to the price tag. Those keen for some top-spec Genki action will have to go the hatch, which now features LED headlights as standard, and is also 700 bucks dearer. 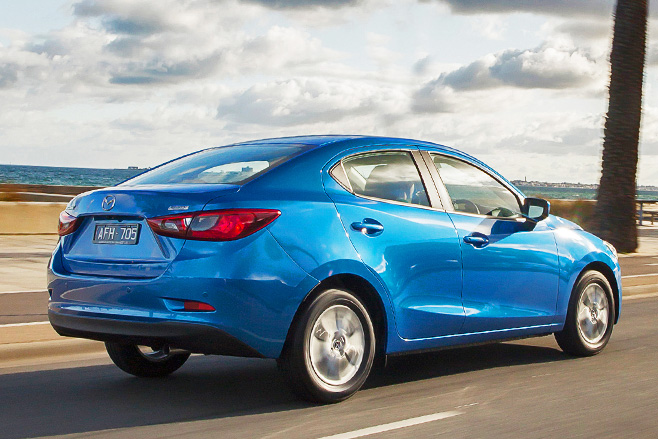 Over a city and suburbs-focused launch drive we captured seat time in an auto Neo and Maxx manual. And as per its hatch counterpart, the Mazda2 sedan is no powerhouse. In fact, in terms of acceleration, it’s more a half-way house. But to be fair, that’s par for the course in this part of the market. And the pay-off is miserly fuel consumption.

Ride quality from the strut front, torsion beam rear suspension came off as relatively harsh in the Neo, although subsequent consultation with Mazda unearthed inappropriately high tyre pressures on the example we drove. And sure enough, the Maxx was appreciably better, with the step from 15-inch steel to same size alloy rims (and correctly inflated rubber?) also making its presence felt. But we'll reserve judgement on the Neo until we have another steer.

The manual ‘box is light and precise, although the engine needs plenty of revs to wake it up for a smooth take-off. The auto is smooth enough, and a flick of the console-mounted Sport switch dials in more aggressive shift points. Only problem there is a reluctance to engage the top two ratios without a flick back to ‘normal’ mode.

Steering feel is good, and the little 2 remains composed, responsive and predictable in quick cornering. Brakes are ventilated discs at the front and drums, yes drums, at the rear. But an all-in weight of just over a tonne for the base model makes that hardware perfectly acceptable. 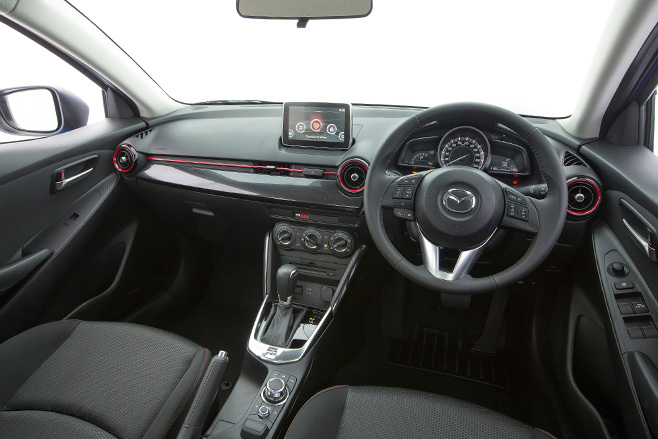 The interior sets the class standard for quality and attention to design detail. The front seats are comfy and despite an overall height 25mm lower than the hatch, rear leg and headroom is impressive for a car of this size.

Neo ride quality remains a question mark until we can jag a second steer, engine response and performance are underwhelming, plus the auto would benefit from a recalibration of the Sport mode.

Would you take the Mazda2 Sedan or Toyota Yaris Sedan?

A facelift is due for the segment-leading Yaris this year. For now, the Mazda2 holds a handy advantage on price, tech and spec.

Click here to read the full review on the Mazda 2 Sedan.