Mazda is having another crack at the languishing light sedan class, and the Mazda 2 Sedan brings more kit for its hatchback sibling as well

Mazda is having another crack at the languishing light sedan class, and the Mazda 2 Sedan brings more kit for its hatchback sibling as well.

WHAT IS IT
The Mazda 2 Sedan is basically the prettier hatch with a boot grafted on. The biggest difference compared with the short-lived previous version is a more harmonious look. While adding significantly larger cargo volume, the Thai-built sedan is otherwise virtually equal to the five-door. 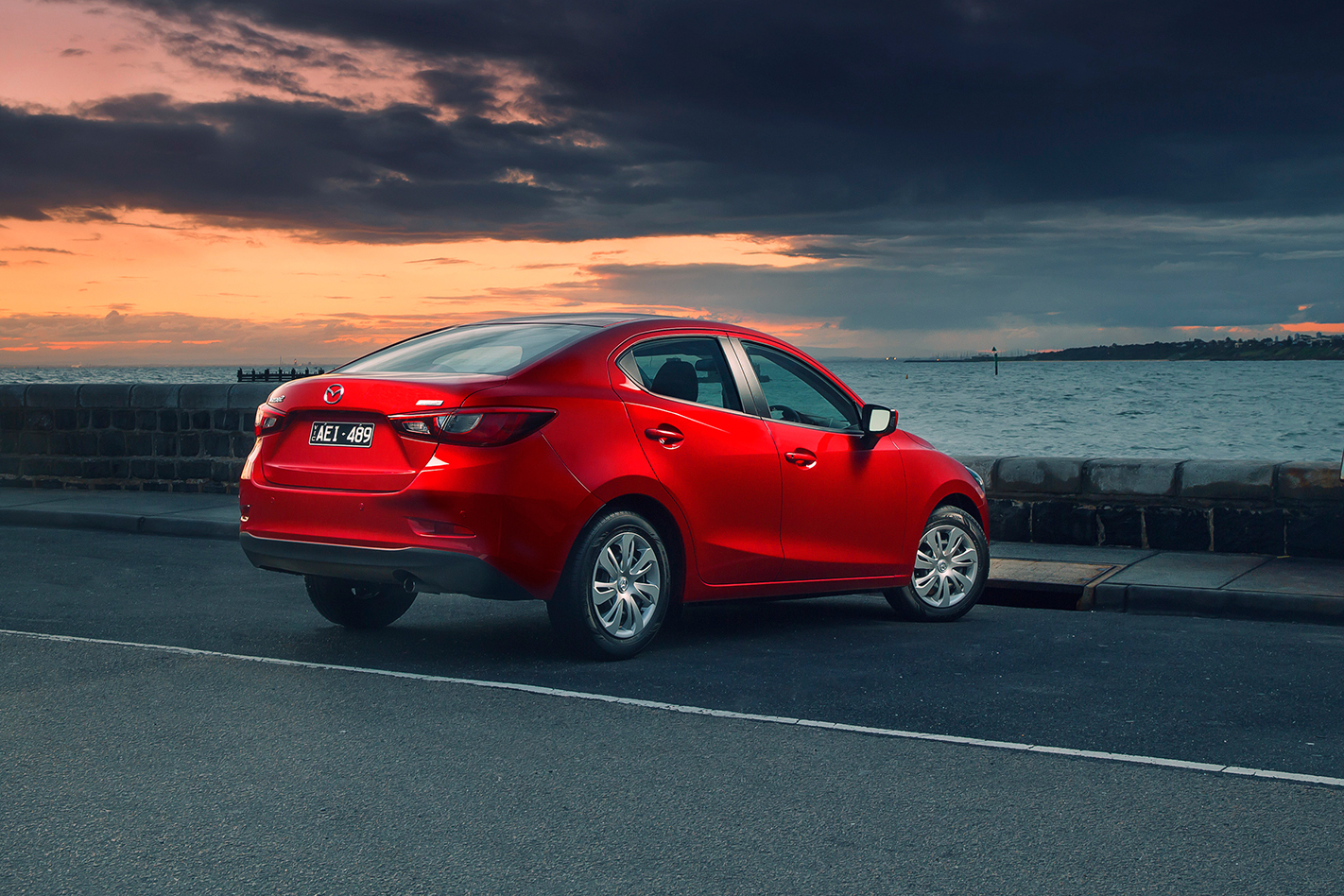 WHY WE'RE TESTING IT
Light sedans are almost universally flawed compared with the superior hatchbacks that begat them, with just one – the Honda City – really deserving a look-in despite not having much driver appeal. But now there is the Mazda 2 Sedan, building on the five-door baby’s impressive base, and promising to lure in three-box loving enthusiasts who would otherwise run the other way. 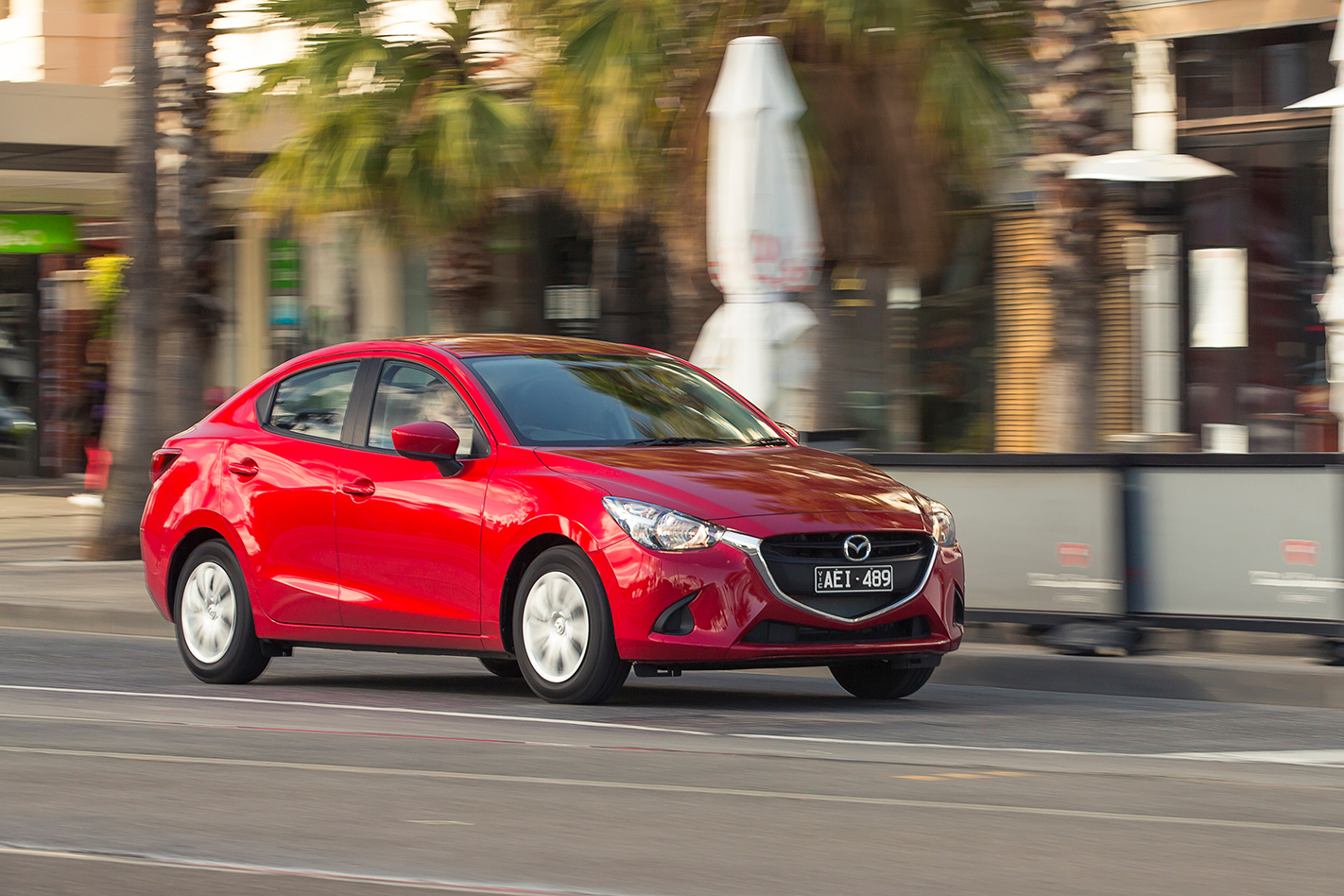 THE WHEELS VERDICT
AT LAST… a baby sedan that appears to meet all of our packaging and dynamic criteria. The three-box Mazda 2 is looming as the number one choice in this class because it combines all the virtues of the spunky five-door hatch – strong handling, gutsy performance, excellent transmissions, and appealing interior – with styling that doesn’t look like an ugly afterthought.

We haven’t driven the hatch and sedan back-to-back, but we can tell you that the latter seems to give away nothing in driver enjoyment. Additionally, for both body styles, the base Neo at last scores standard cruise control and reverse parking sensors at no extra cost, although the extra gear in the Maxx (reverse camera with a larger touchscreen) and Genki (LED headlights) do mean a $700 price jump for each respectively. 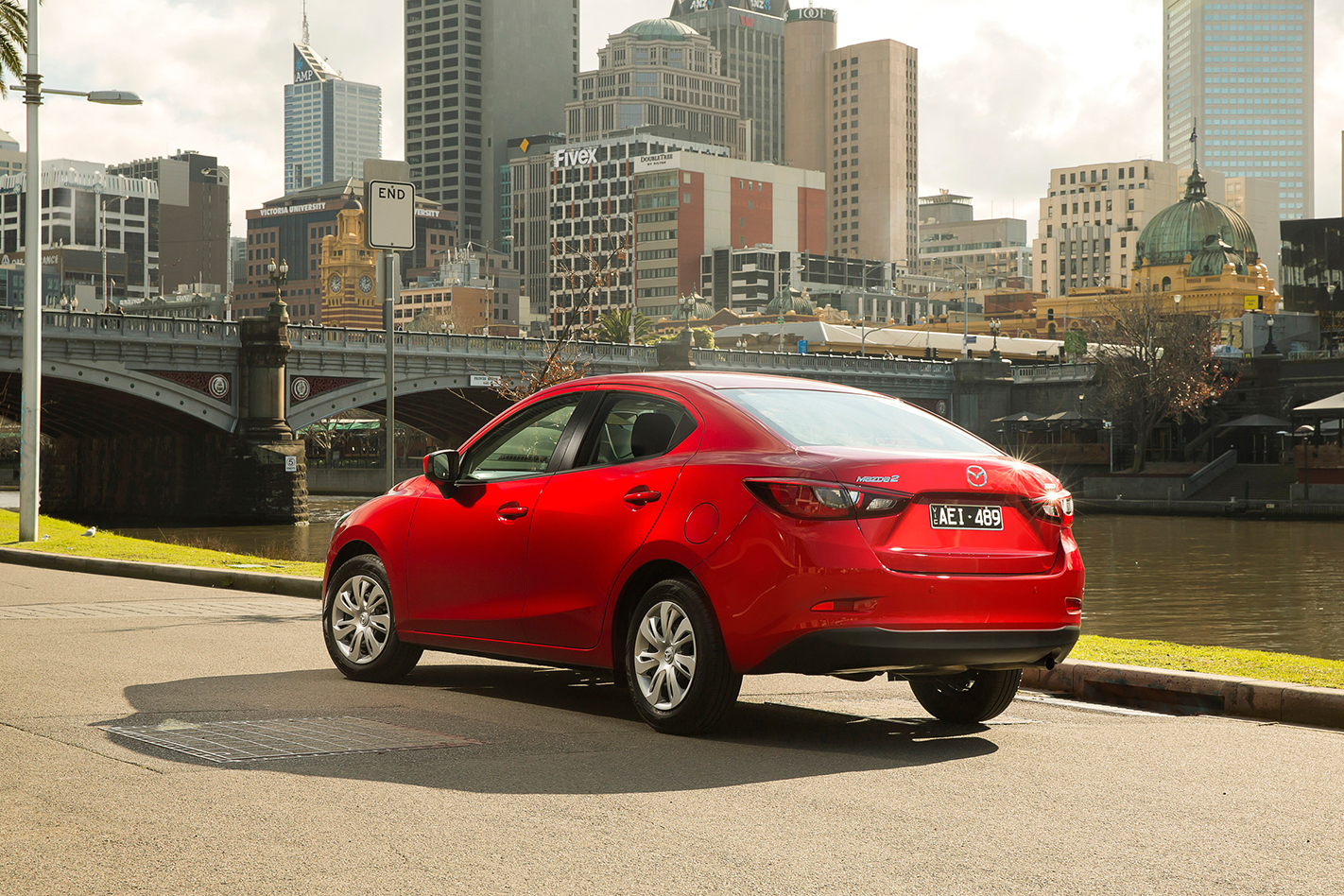 THE WHEELS REVIEW
LAST YEAR Wheels tested four baby sedans – Honda City, Holden Barina, Hyundai Accent, and Mitsubishi Mirage – and all were found wanting. Even the winning City only managed 7/10. It was a puzzle why people wouldn’t just choose their prettier and lighter hatchback counterparts instead.

Now Mazda reckons it has cracked the code with the 2 Sedan. And bam. With a swoopy, scaled-down 3-style silhouette instead of the pregnant bull ant look encumbering most rivals, we’re actually paying attention. 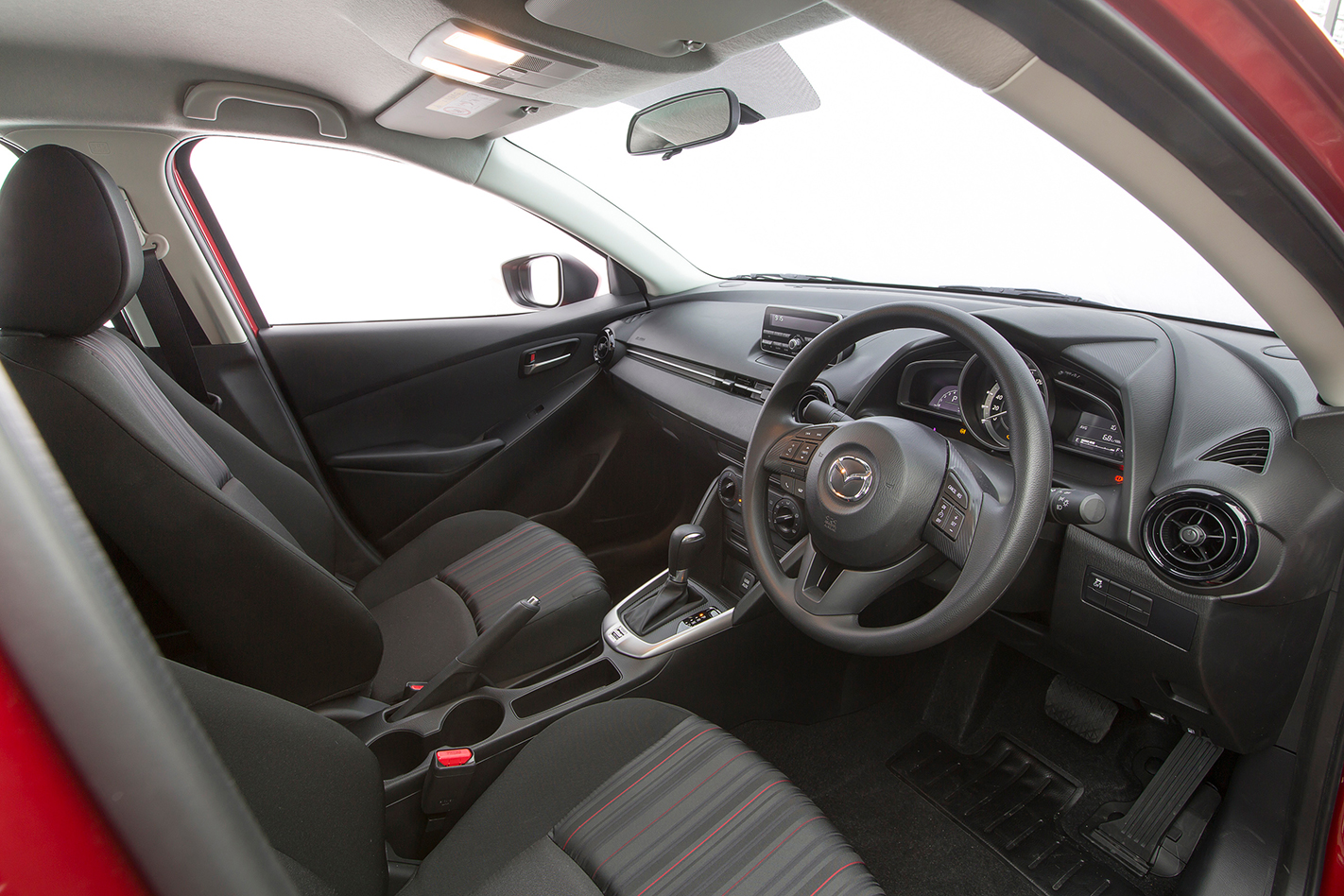 Except for the obvious (a 440 litre boot trumps the 250L luggage compartment), little separates Sedan from Hatch inside. The same funky dash, intelligent control layout, excellent driving position, supportive front seats, and high quality fittings apply – save for minor trim pattern alterations. And while some road noise is evident riding out back in sufficiently roomy and comfy surroundings, the newcomer isn’t too loud. This alone might sway some fence-sitters to think outside the 2-box.

Predictably, two 1.5-litre direct-injection four-pot atmo petrol engine choices lurk at the pointy end, with the base Neo using the 79kW/139Nm V-P5, while the mid-spec Maxx scores the higher-compression 81kW/141Nm F-P5 unit with stop/start and a 4-2-1 exhaust. Honestly, better fuel economy aside, the latter’s differences are miniscule: both rev sweetly, pull hard past the 6200rpm red line and imbue the smallest Mazda with a lively spirit, aided by one of the most delicious manual shifters around. Also notable is the slick six-speed auto, particularly in Sport mode – which holds ratios when needs dictate. 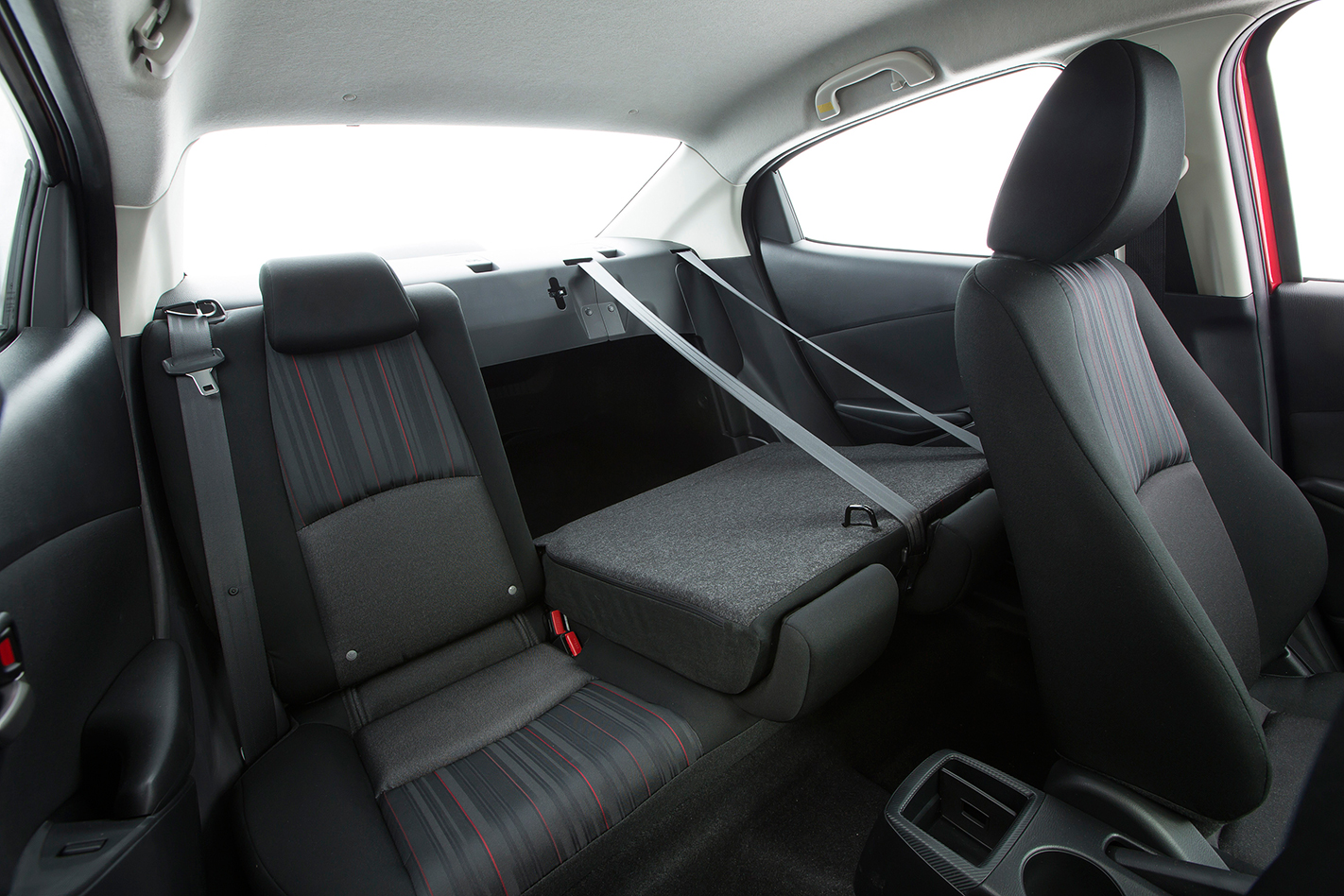 Happily, the 2 Hatch’s (electric) steering and (MacPherson strut front and torsion-beam rear) suspension smarts also make the transition intact, with contained overhangs, a lower roof, less ground clearance, and weight rises of only ten to 15kg. All keep the Sedan feeling equally as sharp and composed, as sampled through the at-times interesting tucks and turns of the Adelaide Hills launch route.

Besides its dorky design, one reason why the previous 2 Sedan (available only in 2010/11) flopped was because of a hefty $20K opening gambit. Now Mazda has pegged the successor with the Neo ($14,990) and Maxx ($17,690) hatch variants. Some 2rainspotters might notice the Maxx now costs $700 more, but that’s because it gains the larger MZR Connect multimedia touchscreen and reverse camera in both body styles. Better still, cruise and rear sensors are now included range-wide, with autonomous emergency braking adding $400 extra. 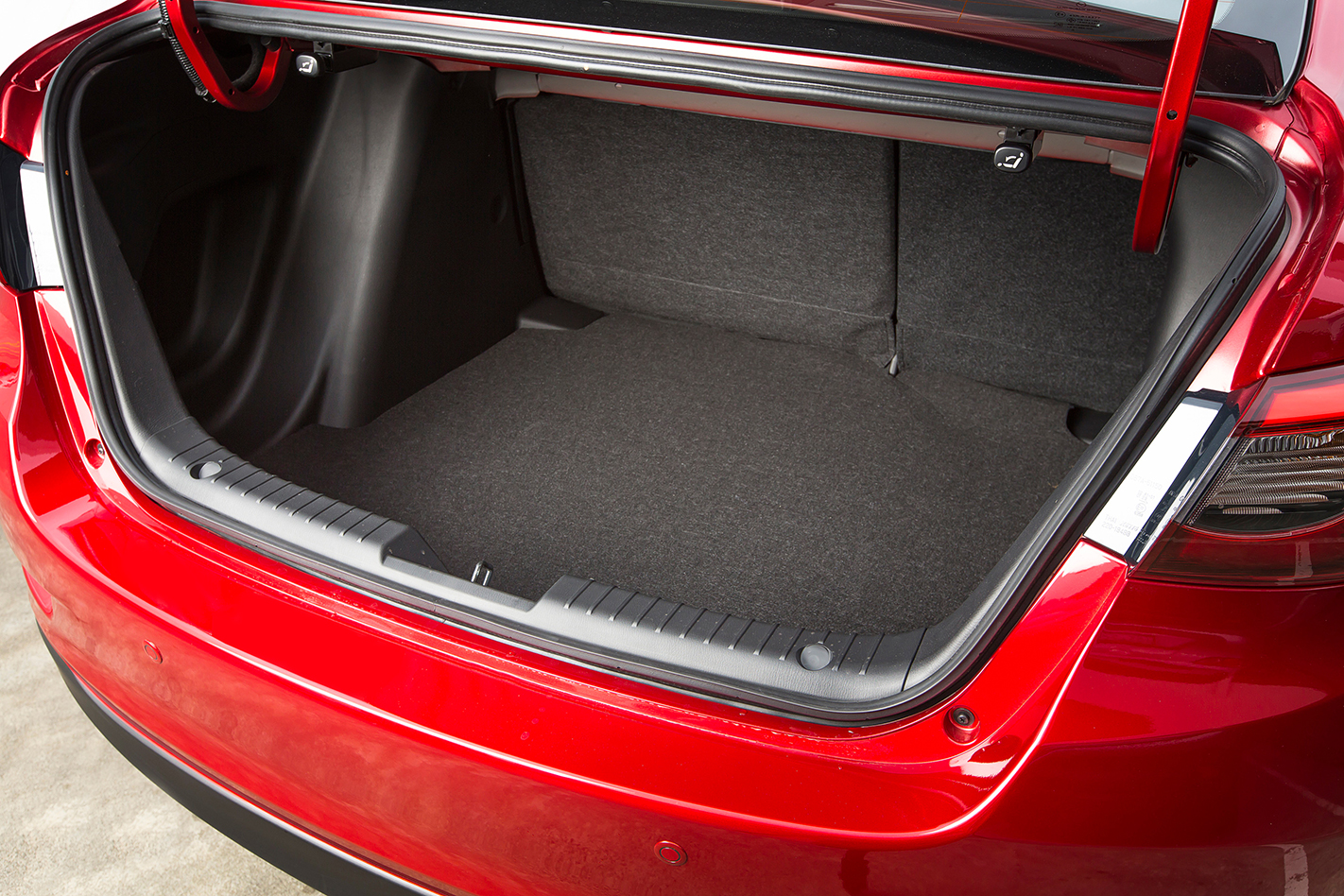 Lower prices, higher spec, and a whole lot better looks – the 2 Sedan finally delivers a three-box baby that speaks to us. And, we’re confident, to you.

Click here to read the full range review of the Mazda 2.