Fourth gen MX-5 goes back to the future, and it’s brilliant. Who says they don’t build ‘em like they used to?

After 25 years, and close to a million MX-5 sales world-wide, Mazda has launched a new fourth gen (ND) version. The result of a development recipe designed to recapture the purity of the 1989 original.

Not that the iconic roadster had pulled an Elvis and lost its mojo. It’s more the compact two seater and Mazda’s ‘Skyactiv’ focus on aero refinement, engine efficiency and light-weight is a match made in sports car heaven.

The new car will launch locally in mid-August with a 96kW/150Nm 1.5-litre naturally aspirated petrol engine, matched with either a six-speed manual or six-speed auto transmission. A 118kW/200Nm 2.0litre version arrives later in the year.

The new MX-5 is not only shorter than its (NC) predecessor, it measures 60mm less than the ‘89 NA. And despite the inclusion of all the safety tech required in the 21st century, plus a higher level of standard equipment, it only weighs 59 kegs more (91 kg less than the NC), dipping close to the magic tonne in entry-level spec.

And kerb weight isn’t the only thing that’s shrunk. A base price of $31,990 is a throw-back to the early ‘90s, despite the fact things like power steering, air-con, ABS/ESP, traction control, cruise control and airbags are now part of the standard spec. 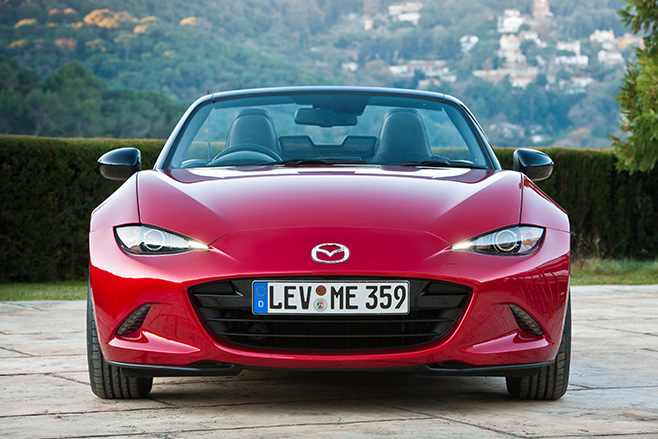 This is an all-new car, sitting on a specifically developed monocoque chassis, reinforced by a central backbone section bolting directly to the end of the gearbox in true Colin Chapman/Lotus Elan style.

The distinctive exterior design follows Mazda’s now well-established ‘Kodo – Soul of Motion’ form, with smooth curves and subtle transitions linking it to the original car as well as its contemporary stablemates.

Although the base 1.5-litre engine is also used in the Mazda 2 and 3 it’s been tweaked for this application with a custom steel crankshaft and revised cam timing, raising the rev ceiling to 7,500 rpm and boosting peak power. Similarly, the top-spec 2.0-litre is also used (transversely-mounted) in the Mazda 3, 6 and CX-5.

MX-5 program manager and 42 year Mazda veteran, Nobuhiro Yamamoto told us he remains in touch with members of the original MX-5 development team, and like them, his aim was to build a lightweight car that connects on a gut level; it had to be “fun to drive.” And we’re happy to confirm Yamamoto-san has hit that nail squarely on the head.

With a low centre of gravity, 50:50 weight distribution, and superb double wishbone front and multi-link rear suspension set-up, the MX-5 is a pure and simple pleasure to drive.

With just 96kW and 150Nm on board it’s no surprise the 1.5 takes 8.3 seconds to hit 100km/h. But as with the Lotus Elan that inspired the concept, it’s the overall driving experience that makes the MX-5 so enjoyable.

Mazda uses the term Jinba ittai, a Japanese phrase meaning horse and rider as one, to describe the relationship between the MX-5 and its driver. And despite rusty equestrian skills we totally got the connection on a UK-based global launch drive combining urban running, open highway sections and a closed session on the historic Goodwood circuit in West Sussex.

The perfectly weighted, electrically-assisted steering delivers rapid, yet linear response and great road feel. The six-speed manual, complete with stubby, short-throw lever, is a delight, and the pedals are well placed for heal-and-toe on down-changes. 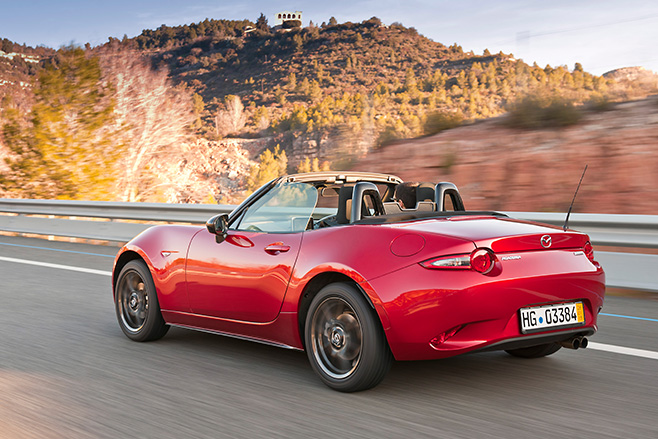 The 1.5 sounds uncannily like the original car’s 1.6, rising to an energetic rasp at high revs, and a quick shift from sixth to fourth (or third) is all that’s required for rapid open road overtaking.

Standard Yokohama Advan Sport rubber (195/50) on 16-inch rims grips hard, while the chassis and steering accurately telegraph the car’s movements in quick cornering. Brakes are progressive and strong. Jinba ittai to the max!

But one of the biggest stand-outs is ride comfort. Mazda’s suspension gurus have used a combination of technical expertise and black magic to pull off an amazing double act. Lightness and nimbleness combined with impressive composure even on ordinary b-road surfaces. Over swooping undulations it feels like the MX-5’s wheelbase is much longer than its 2.3 metres.

The bigger engine’s induction noise is relatively loud and coarse, the exhaust note is less engaging, the drivetrain isn’t as refined in terms of throttle response and clutch action, and ride quality suffers slightly from the shift to 17-inch wheels (shod with 205/45 Bridgestone Potenzas.)

One of the MX-5’s outstanding features is its manually folding roof. While others are busy installing multiple electric motors to control convertible tops, Mazda simply put its Skyactiv hat on and refined the process.

The result is a single latch and an easy, one-handed movement (from the driver’s seat) to raise and lower the lightweight soft hood. It makes the switch from closed to open motoring a breeze, even at surprisingly high road speeds.

The interior design stays true to the less is more philosophy with body colour door panels and dash details on premium variants echoing classic roadster style. The seven-inch, tablet style ‘MZD Connect’ infotainment screen on the dash is the only overtly modern addition.

The seats are minimalist but comfortable with plenty of lateral support (although some will find the backrest narrow), the traditional white-on-black instruments are clear, and speakers in the headrest on all models is a nice touch. Boot space is also surprisingly generous, especially in terms of depth. 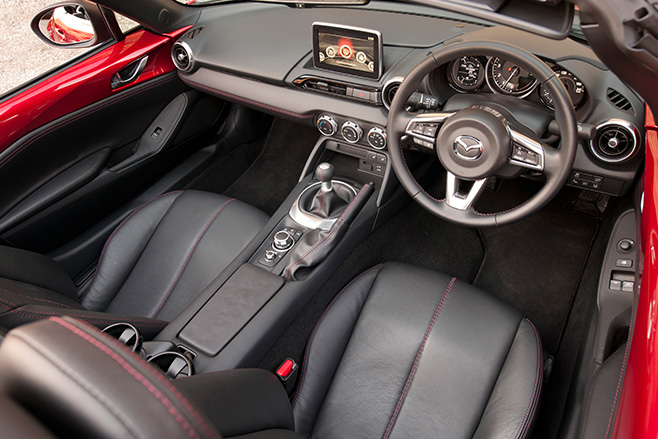 Marks in the negative column include a height but not reach adjustable steering column, no storage in the doors, a glovebox placed awkwardly on the bulkhead between the seats, and cup holders at the rear of the centre console only Houdini could find easy to use.

At $31,990 pricing for the entry-level 1.5-litre manual, that’s a more than 15 grand reduction on the outgoing car. It’s totally worth it.

Built on the same premise of back-to-basics simplicity and fun, they’re both brilliant sports cars. But the Mazda’s a step ahead now on dynamic depth and engineering maturity.

Click here to read the full review on the Mazda MX-5.