Merc's classy compact wagon is a refined and entertaining grocery-getter with engines to suit all tastes.

Even if they won’t admit it, younger siblings want to impress their big brothers or sisters, and the Mercedes-Benz CLA is no different. The mid-size CLS is the glamour puss of the Merc passenger car range; the sleek four door having been joined by the striking Mercedes CLA Shooting Brake wagon in late 2012. And the mini-me CLA has been jumping out of its skin to follow suit.

Offering petrol and diesel engines, as well as a fire-breathing AMG flagship… just like the CLS, it’s no surprise Benz’s baby four door coupe has also morphed into a Shooting Brake variant, with the same flowing lines and beautifully balanced stance as its larger stablemate.

Of course, the usually front-drive CLA claims cheeky bragging rights with all-wheel drive on performance models, while the CLS retains rear drive only. 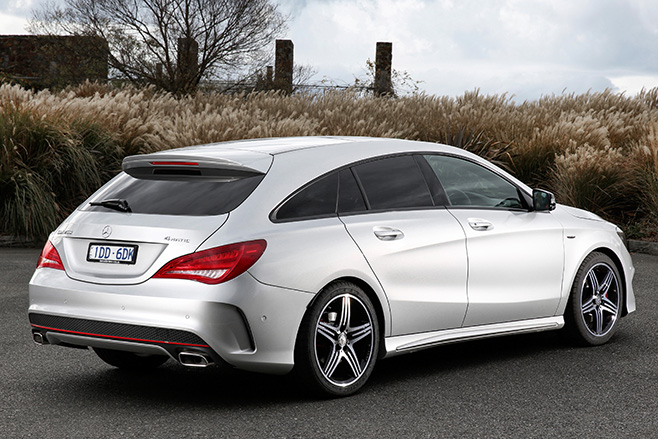 This compact wagon offers a classy alternative to the SUV contagion sweeping the prestige and luxury markets, with conventional car comfort and dynamics combined with genuine load-lugging practicality.

The Brake’s wagon profile, delivering the extra cargo space, is the only fundamental change from the coupe. And on the subject of carrying capacity, if you have to cart a bunch of one litre milk containers, 495 of them fit in the back with rear seats up (595 with the rear bench in the more upright ‘cargo’ position), and 1,354 squeeze in if you load to the roof with the rear seats folded.

Merc also claims rear headroom is increased by four cm, and we can confirm access to the back seats is easier thanks to larger door apertures. 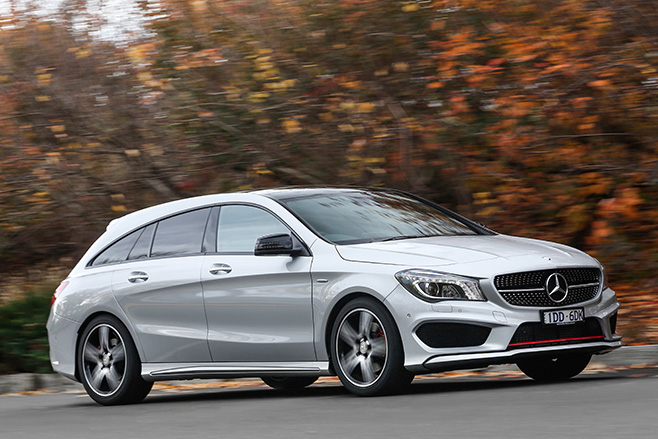 A launch drive program over semi-rural roads north-east of Melbourne offered the opportunity to swap through each model in the range, and first impressions of the entry-level 200 are dominated by the quality of its ride and comfort of its front seats.

Zero to 100km/h in a claimed 8.7secs isn’t exactly sizzling, but it’s not lethargic either. The 200 has enough grunt for comfortable cruising, while others further up the performance food chain do the quicker point-to-point stuff. Electro-mechanical steering delivers excellent feel and response.

Cue the 200 CDI diesel’s extra torque, which boosts mid-range punch, but less power means it can’t carry it through to the top end. And in terms of refinement, the price paid is more noticeable turbo lag and (not particularly appealing) engine noise.

Which leads to the 250 Sport, which for $14k more than the base petrol 200 brings more urgent performance (0-100km/h in 6.8secs), and thanks to lower and retuned AMG suspension as well as Merc’s excellent 4MATIC all-wheel drive system, also delivers brilliant power down and determined drive out of quick corners; all accompanied by dramatic exhaust pops and spits with the gearbox in sport mode.

And then there’s the wonderfully bonkers 45 AMG, with its screaming 2.0-litre, twin-scroll (M133) turbo four delivering 0-100km/h in 4.7secs, which is only two tenths slower than the 65kg lighter A45 AMG hatch. If you need to carry people and stuff fast, this is your compact wagon. 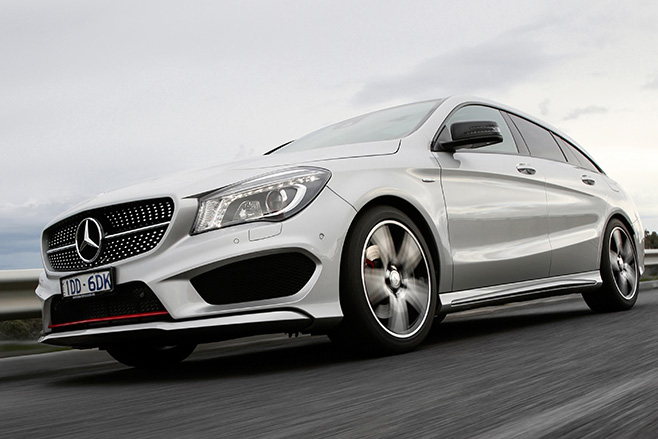 As with other body variants sitting on Merc’s MFA (modular front architecture) chassis, the 250 Sport is the sweet spot of the range. Calm and comfortable on the city commute, it’ transforms into a smile-inducing back-road blaster at the flick of a dual clutch Sport switch.

The dash layout and instrumentation on all models is clean and clear (the tablet style infotainment screen is a particular stand out), but the 250’s interior has a brighter, more premium feel. 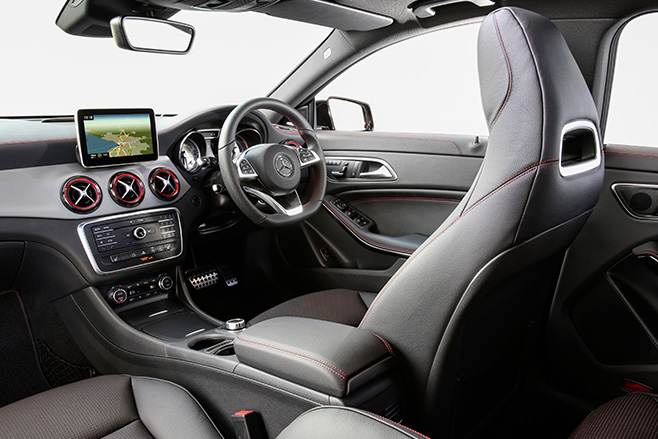 Finish quality on the base 200 models isn’t as good as we’d expect in an early $50k car. Sharp-ish edges around some interior moulded parts are a letdown, as is the use of hard plastics around the cabin, and the uniformly dark grey colour scheme in the 200 is mass market plain.

The 250 Sport chips in with heated front seats, ‘Keyless-Go’, AWD, the AMG suspension set-up, a panoramic glass sunroof, ‘Intelligent Lighting’, and perforated front brake rotors. Then, aside from its mental drivetrain, the 45 AMG features leather-trimmed AMG performance seating, trickier infotainment with digital radio and a bigger screen interface, as well as Harman Kardon audio, 19-inch AMG rims and hi-po brakes. Lots of performance and lots of equipment. In fact, a decent value equation across the board.

Would you take the Merc-Benz CLA Shooting Brake or BMW 2 Series Active Tourer?

The BMW’s interior is brilliant, but as a driver’s car, the Merc’s on pole.

Click here to find out more about the Mercedes CLA-Class Shooting Brake.