The Mitsubishi Outlander – a sometimes people mover and full-time wannabe SUV – has had significant tweaks as part of running changes that simplify the line-up, make it more refined on the road, and improve safety.

Mitsubishi’s third-generation Outlander was introduced to Australia in 2012. Despite a number of tweaks to the styling and packaging, it has never exactly set buyers in the mid-size SUV segment alight. A rush of fresh, good-to-drive competitors have moved the game on since the current-generation Outlander’s arrival, but Mitsubishi has tried to keep pace.
The latest update, following on from a major styling tweak introduced in April 2015, drops the XLS badge, includes suspension and steering refinements, and adds an optional safety pack for some LS-badged cars.
The one we’re reviewing here is the upper-middle-class 2.2-litre diesel-engined seven-seater that includes a part-time selectable all-wheel-drive system, and is priced from $39,500 including the extra safety gear.

● The addition of a safety pack expands the Outlander’s already-strong credentials. It has seven airbags including one for the driver’s knees, an electronic stability control system that doesn’t have an off-road setting, and anti-lock brakes. The safety pack pitches in automatic emergency braking, a lane departure warning, adaptive cruise control and automatic high beam dipping.

● The fuel economy of the diesel drivetrain is good. Our car was barely run in, which means the engine is unlikely to have settled into its most fuel-efficient mode, but we were still getting an average of 7.1L/100km compared with an official figure of 6.2L/100km.

● The diesel-engined Outlander sets a conventional six-speed automatic, and not a continuously variable transmission. The conventional auto is a much better match to the diesel as it means the engine doesn’t flare angrily and noisily under harder acceleration – a drawback of the petrol-engined cars.

● Space is great. The cabin is a bit narrow, but as a six-seater with small children in the rear seats, it makes for a great people-mover. The second-row seatbacks flip forward to open up enough space for kids to get into the third row comfortably.

● Parts of the Outlander’s updates include its infotainment system. That means it adds crystal-clear digital radio, and improved smartphone connectivity via Apple CarPlay.

● It rides and steers a lot better. The improvement to particularly the steering, which gains weight and doesn’t need constant small inputs to keep pointed straight ahead, helps give the Outlander a more confident feel on road. The ride with just the driver on board is a bit jittery, but fill some seats in the back and the ride quality improves even more.

● An electric park brake, added to AWD models, is great because it introduces a function that automatically holds the car at traffic lights, and opens up a lot of space on the centre console. However, that extra real estate isn’t converted to useful storage space, just more hard plastics. And the ergonomics of hiding it under your left elbow aren’t great.

● The Outlander beeps a lot. It chimes when you open a door while the engine is running, if you stray too close to the line when the lane-keeping function is on, when a car closes in up front while the active cruise control is set, and when the active cruise brings the car to a complete stop and hands control back over to the driver.

● You need to question why you want the AWD system. It provides better traction on slippery surfaces, but the downside is that it adds weight, which drags down fuel economy. Aside from its extra ride height, the Outlander doesn’t have any other nods to off-road ability, so even with AWD you wouldn’t take it far off-road.

● The centre-middle seatbelt drops down from the roof. It’s a minor nuisance when accessing the third row, and cuts across the view in the rear-vision mirror. The Outlander has a reversing camera standard across the range, which atones for it.

● The load flexibility of the wagon is a little compromised. Third-row seats fold flat to the boot floor, but the second-row seatbacks sit proud, so the load space isn’t flat. The seats don’t have a memory, either, so don’t return to the position you moved them from when flipping and moving them forward to open up the third-row seats.

● Mitsubishi’s warranty is good at five years, but is valid for only 100,000km. Kia, in contrast, has a seven-year, unlimited-kilometre warranty. Likewise, Holden has just three years, but 100,000km. Mitsubishi’s mix may encourage you to keep the amount of travel down if you tend to do more kays than average.

The Nissan X-Trail offers a seven-seat version, but only with a petrol engine. A Dodge Journey (that offers a diesel engine) offers a similar interior package to the Outlander, as does the Honda Odyssey (that doesn’t), although both replace faux off-road looks with a mash-up of van and SUV styling. The Holden Captiva has a seven-seat diesel, but struggles against fresher, and much better, competition apart from its $33,490 price tag. Kia’s Sorento has seven seats as standard, but at more than $42,000 is priced out of this league; as are the Mazda CX-9 and the petrol-only Toyota Kluger. 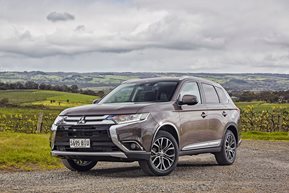