This is the all-new fourth generation of Mazda’s hugely popular small car, offered in both sedan and hatch. They are powered by mildly updated versions of the SkyActiv-G petrol four-cylinder engines, in 2.0- and 2.5-litre capacities. Both body styles are larger than the models they will replace when launched in Australia around May, but this doesn’t translate to increased cabin space. 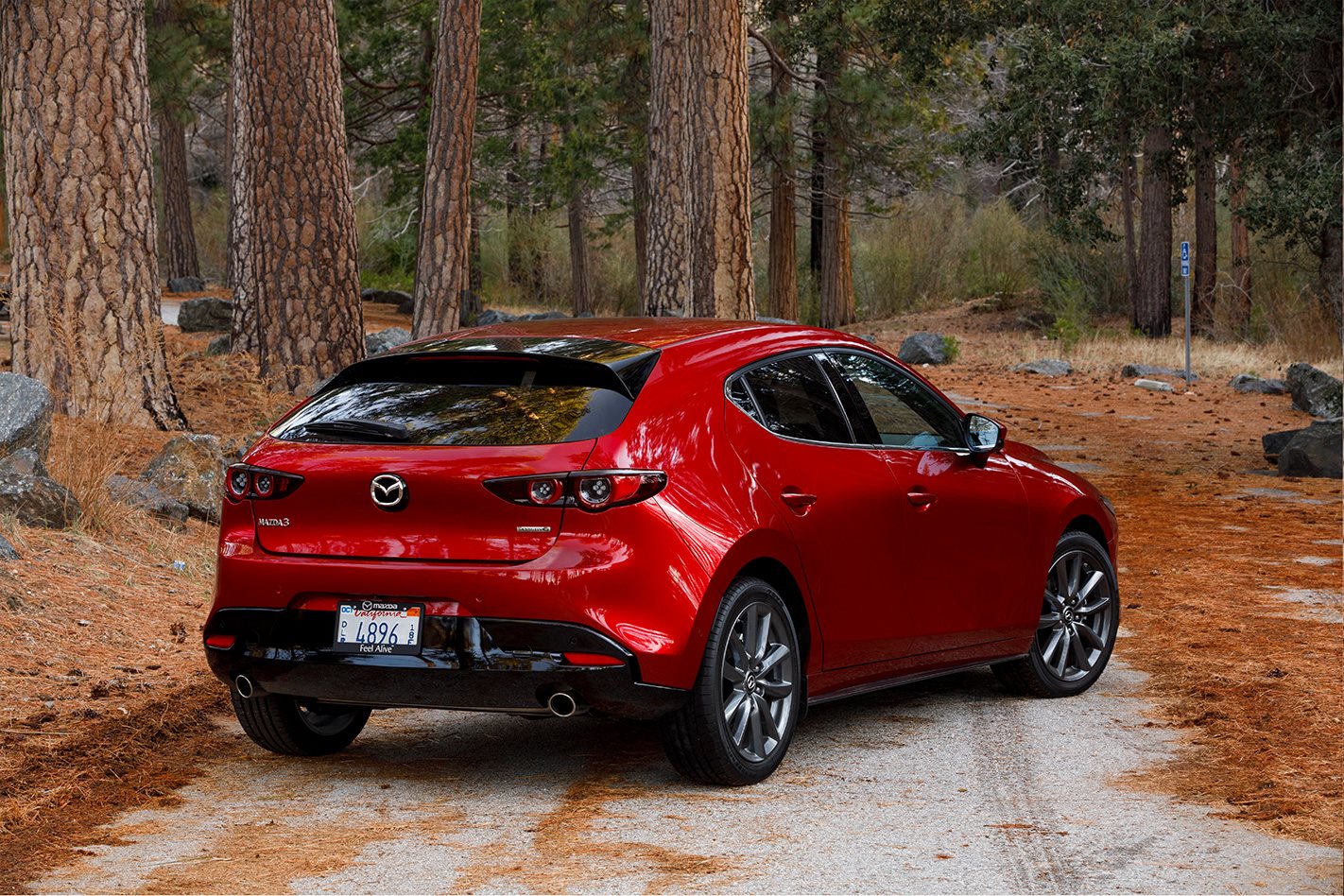 The significance of the 3 to the Australian market can’t be understated – it’s continually up the very pointy end on the best-seller list of passenger cars, and fights against long-standing incumbents like the Toyota Corolla, Ford Focus, Volkswagen Golf and Hyundai i30.

Read next: Toyota Corolla vs Hyundai i30 vs Mazda 3 vs Honda Civic comparison review

Mazda Australia has not announced final specification or pricing for the models we’ll see here, so we’re basing some assumptions around the outgoing range, and the expectation that prices may rise slightly, but so will standard equipment. 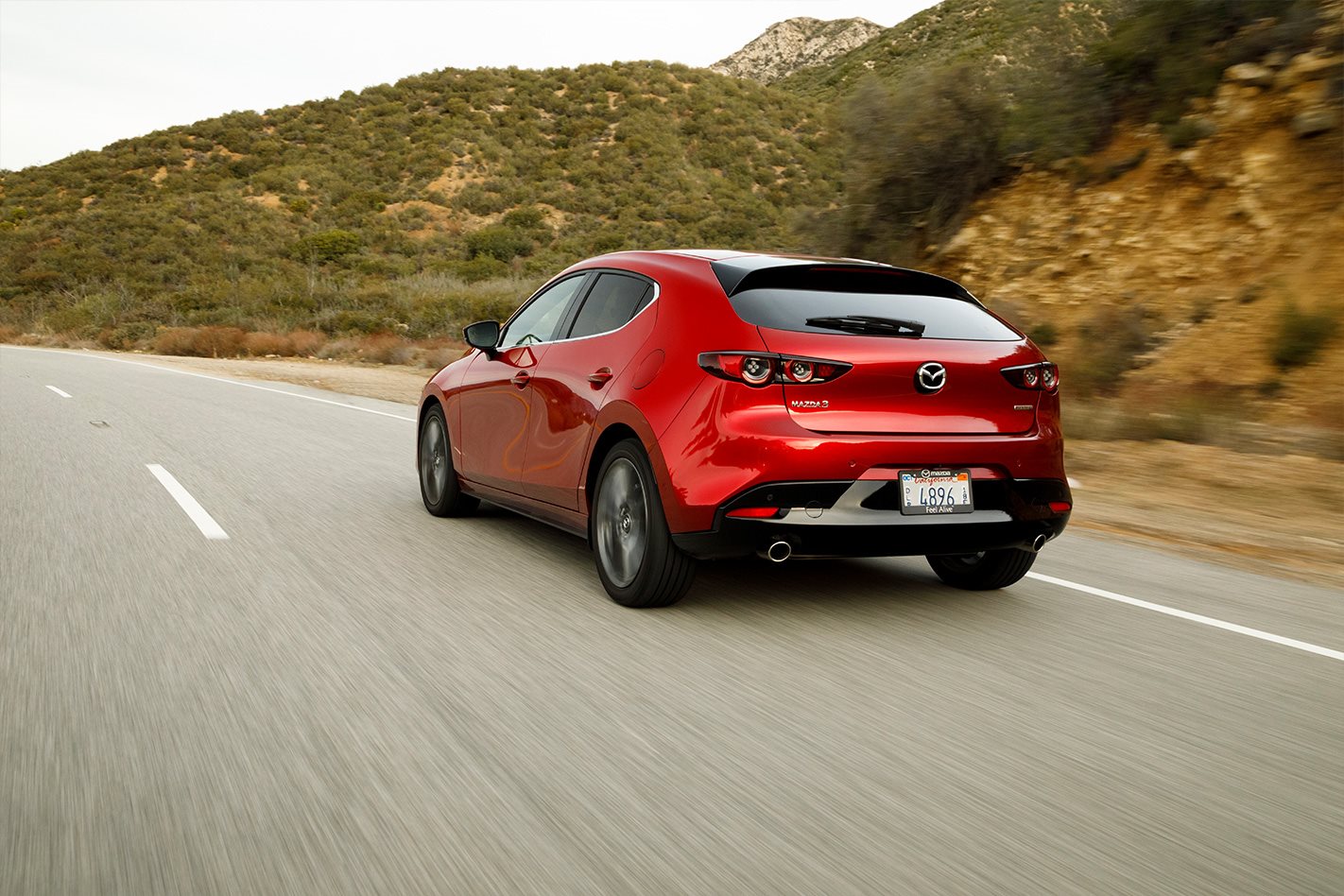 Expect the range to start at around $22,000 (plus ORC) for an entry-level manual hatch, and top out at around $36,000 (plus ORC) for a top-spec automatic. Mazda’s five-year/unlimited kilometre warranty is strong, if short of industry best (Kia, at seven years.) Official resale appears solid but unremarkable for the outgoing car at around 55 per cent of retained value over three years.

Again, this one also requires some assumptions around the outgoing range, plus what was fitted to the cars we drove in the USA. Expect each variant in the range to be at least as well-specced as the best in class, and possibly among the best presented, with the possible exception of the VW Golf.

Interior design is a highlight. The instrument panel, HVAC controls and centre console appear far less cluttered compared to the outgoing car, with greater practicality evident in things like the dual cup holders forward of the shifter, and a generous bin ahead of that for phone or sunnies. 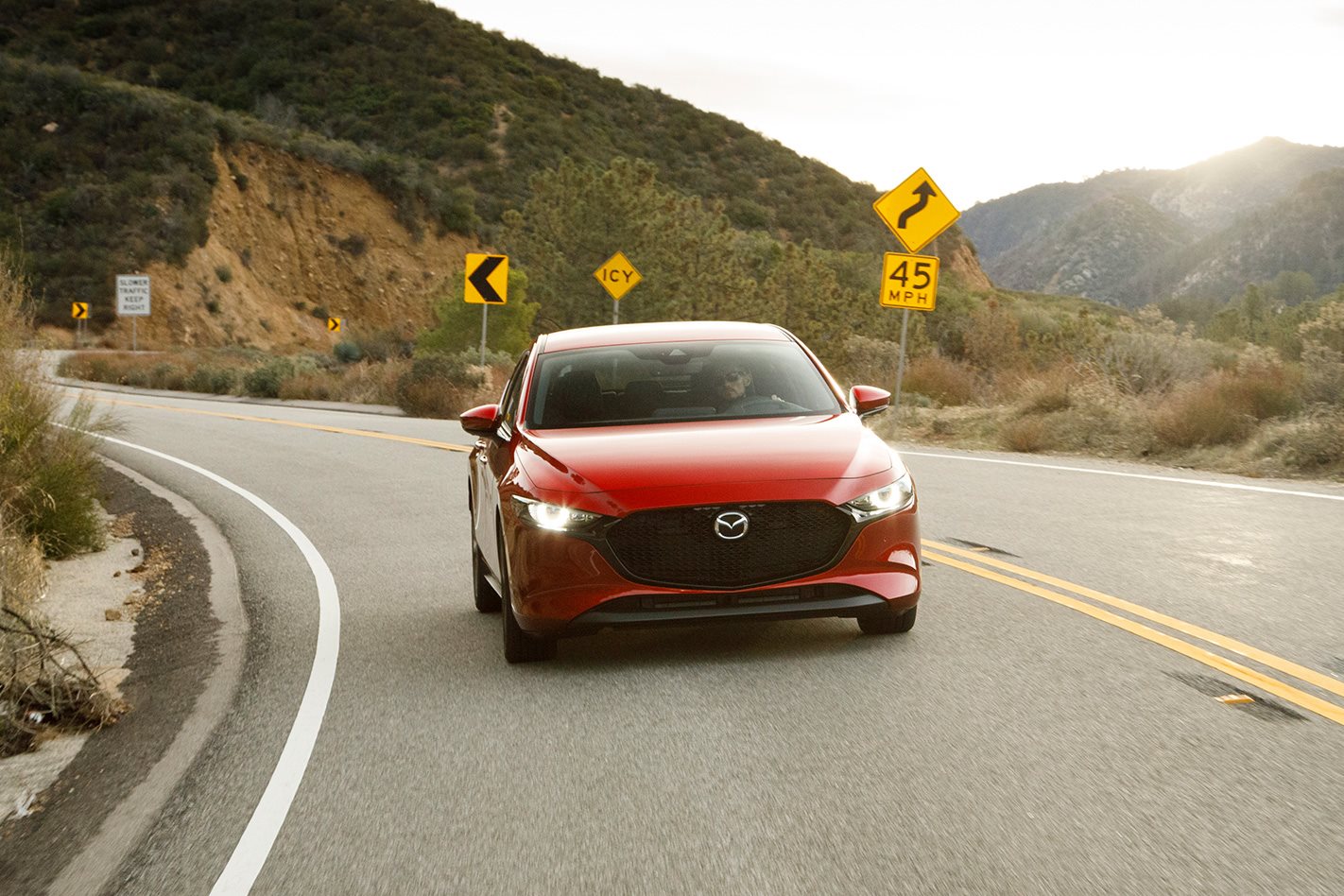 The multimedia screen is larger – now 8.8 inches – and positioned slightly further away from the driver to reduce the eye-focussing time from the road ahead to the display. Mazda has also bucked the touch-screen trend, claiming it’s safer for drivers to navigate the improved system via the larger rotary controller just aft of the gear lever.

Less divisive are the revamped and better-explained functions within the various menus, as well as the improved head-up display for top-spec models, which ditches the pop-up plastic reflector thing for a more integrated and sophisticated projector system. Eyes-ahead clarity for navigation and speed-sign recognition is excellent. 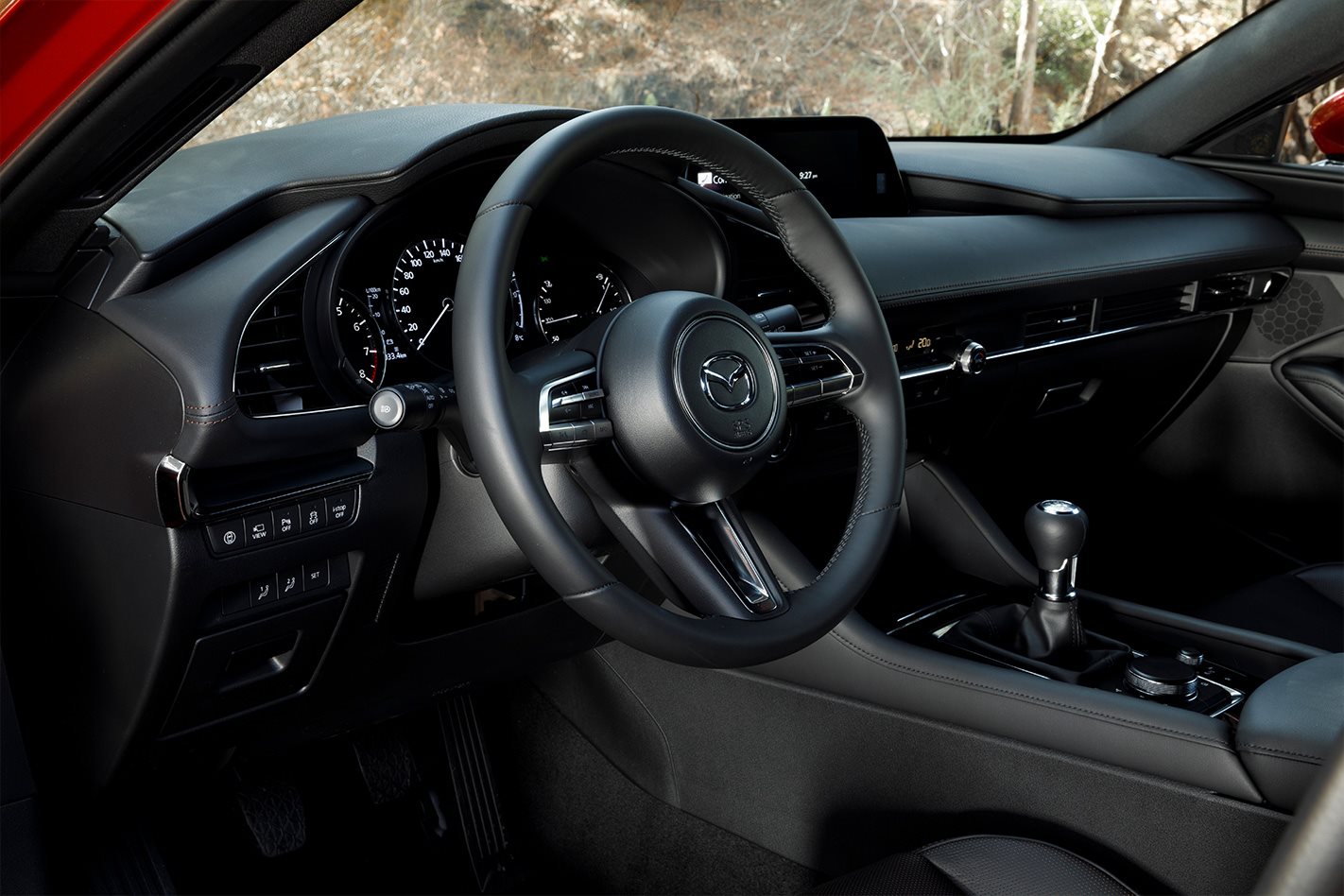 And you’ll instantly note the move to better quality materials pretty much everywhere, from the stitched dash top in upper-spec models, the padded lid of the generous console box, as well as the uniform slickness and tactility of every button and switch. Even the warning chimes and the indicator’s ticking sound have been acoustically buffed in the quest to make the car feel premium.

Read why the Mazda 3 is this year's most important car

It’s a convincing effort, and sadly for the likes of Ford’s all-new Focus and even the Corolla, leaves those rivals in a world of scratchy-plastic hurt. 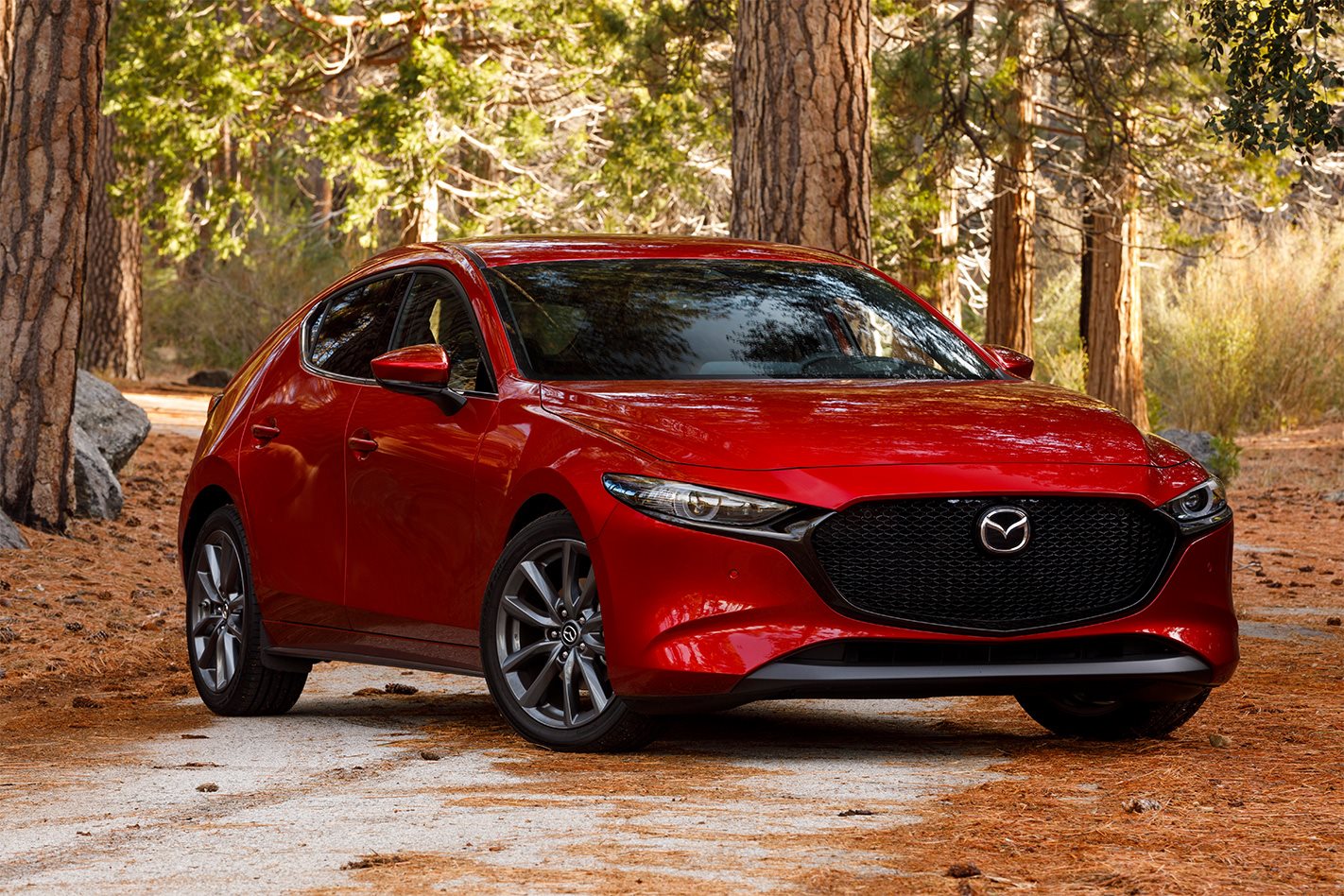 The all-new platform delivers slightly larger cars (the hatch is 4460mm long, the sedan is 4662mm) riding on a wheelbase that’s 25mm longer than the outgoing model, but this hasn’t translated into any appreciable gain inside the cabin.

Sitting behind the driver’s seat set for my six-foot frame, rear head- and legroom is adequate, nothing more. If rear-seat room is a high priority, you may be better off at a Honda dealership looking at the commodious Civic. 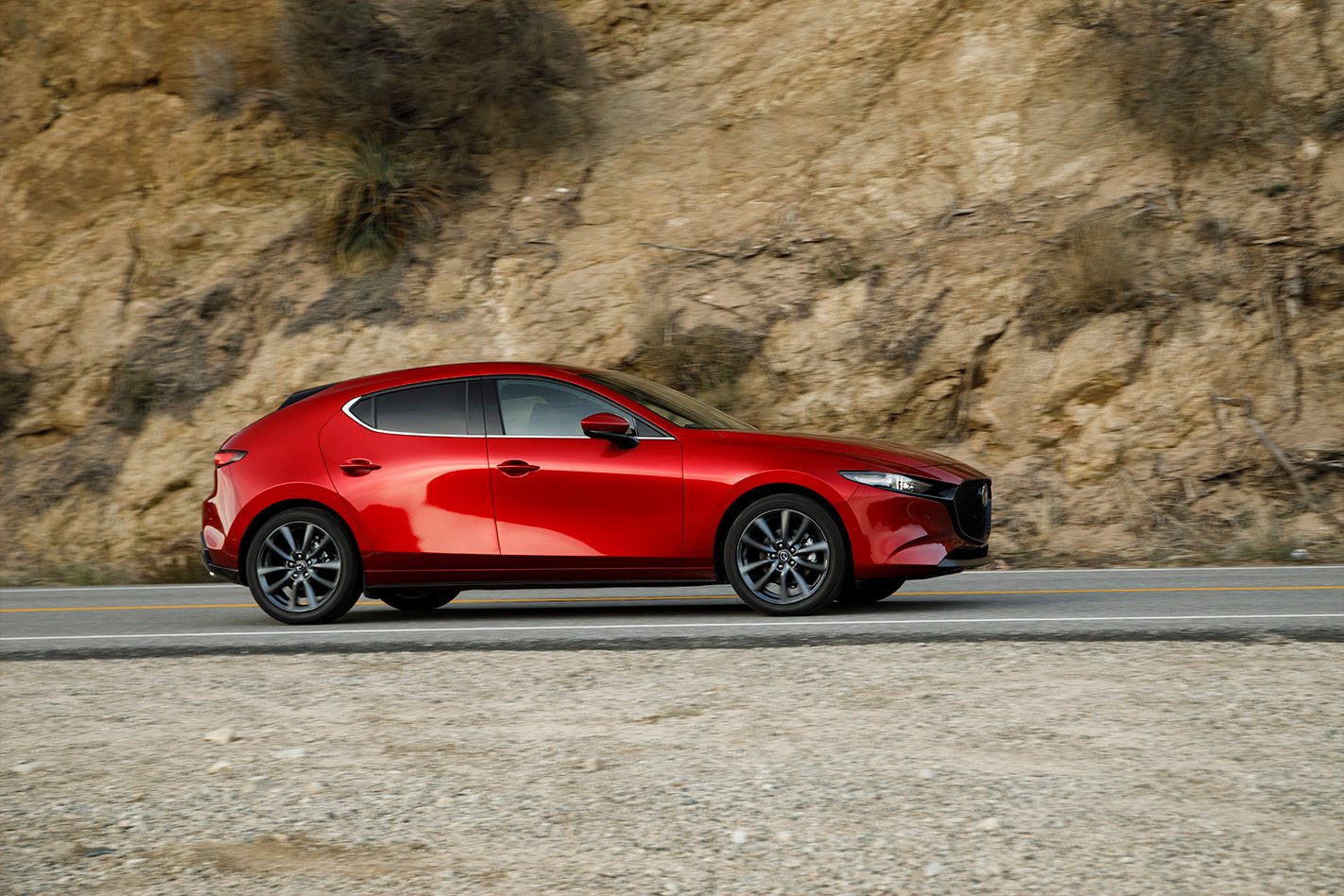 For those counting litres, boot space in the hatch has actually dropped slightly (was 308 litres; now 295), so no, the new model is not exactly a masterclass in packaging genius. The sedan offers a bigger boot, and, as with the hatch, features folding rear seats, but the fixed parcel shelf limits load height and the shape of stuff that will fit in there.

In its most highly-specced form, there’s the potential for the new 3 to feature cross-traffic alert both front and rear, a camera to monitor driver attention and drowsiness, lane-keep assist, AEB that recognises pedestrians and cyclists, blind-spot monitoring, and active cruise control. 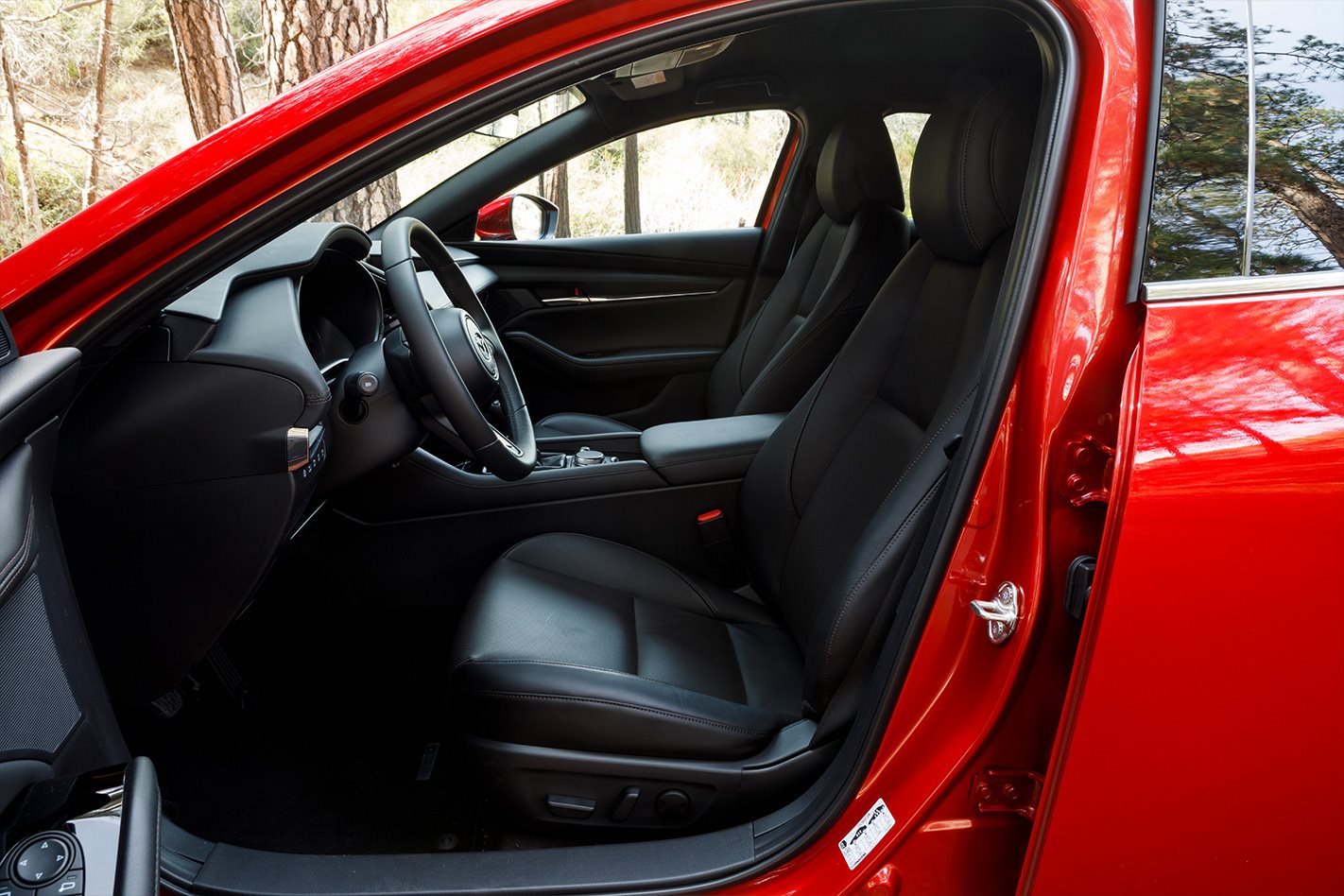 In short, excellent. The central message that Mazda is pushing with the new 3 is one about human-centric design. That is, putting the human form – and the way people sit, bend, see, and generally function while driving or riding in a car – at the forefront of every design decision.

The front seats in the up-spec cars we drove are claimed to position occupants better than the outgoing car, even if we are told the hip-point remains much as it was. What I did notice straight away is that for my XL frame, the front seats are instantly more comfortable and supportive than those in the top-spec Mazda 6 Atenza I recently drove. 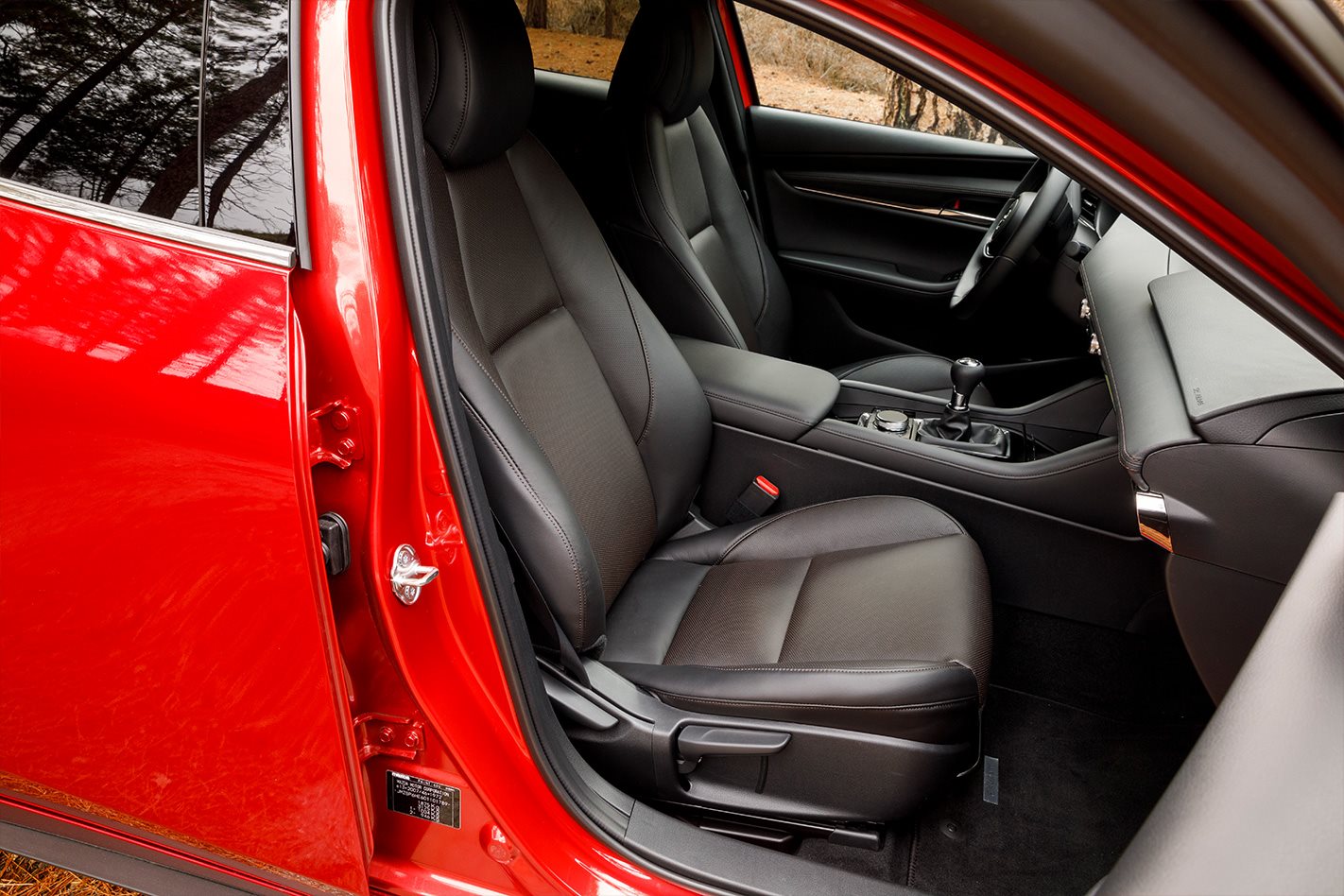 The driving position feels spot-on, with dead-pedal and throttle in auto cars placed shoulder-width apart, and the steering column now provides an extra 20mm (for a total of 70mm) of reach adjustment, allowing taller drivers to pull the wheel in closer.

Next generation Mazda 3 small car to launch in LA

By declaring all-out war on road noise – including the use of a new production process that sees sound-damping ‘nodes’ sandwiched between key sheet metal sections before spot-welding takes place – Mazda have delivered a small car that not only rides and drives with a maturity that could be from the class above, it also seems likely to challenge the Mk7 Golf for refinement honours.

Only the lack of ventilation for rear-seat passengers detracts from the 3’s overall scoring for comfort. 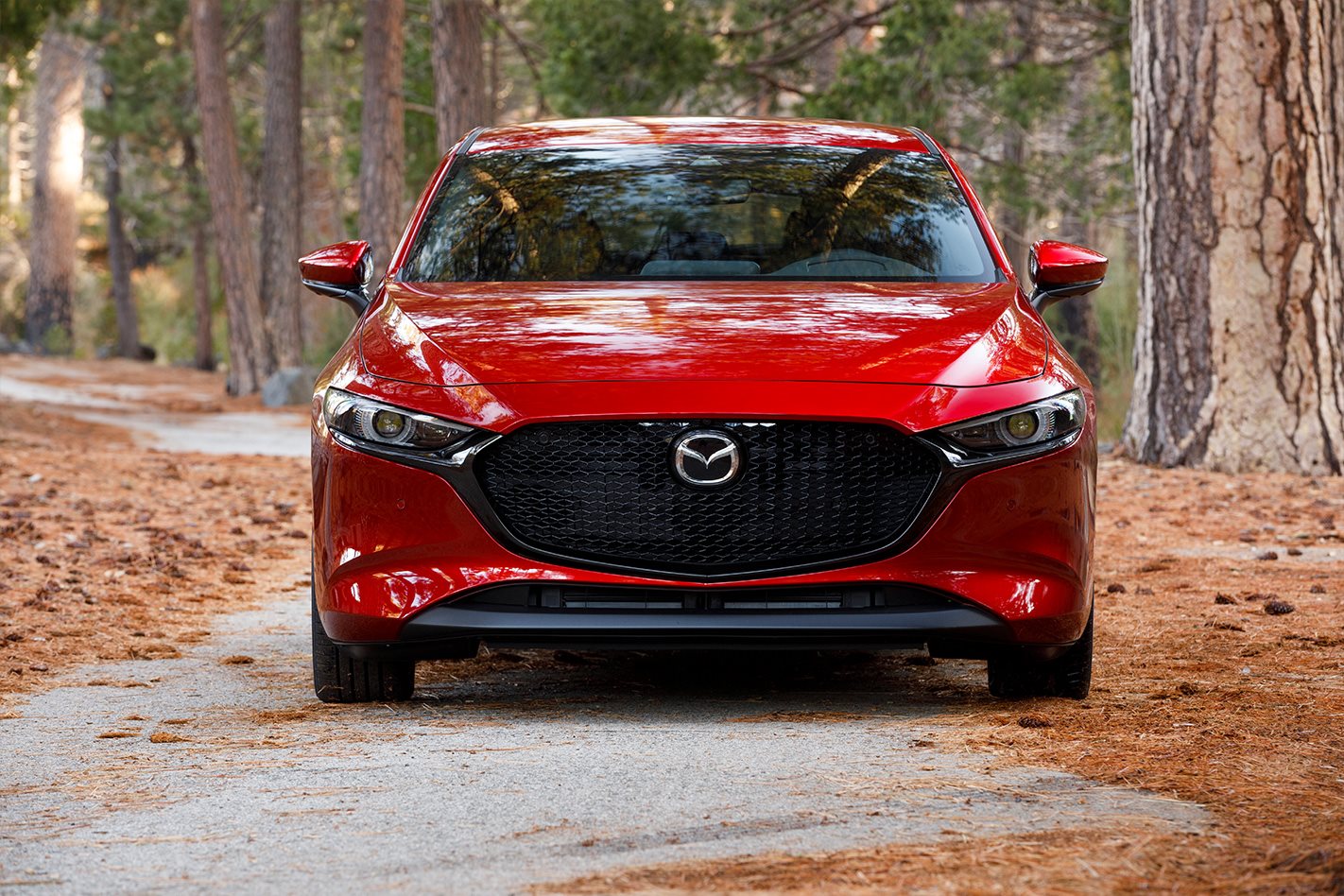 Our drive out of Los Angeles took in suburban streets, slab-section freeways and some enjoyable twisty bits up in the mountainous Angeles National Forrest above the glittering metropolis. On just about every level, the new 3 deeply impressed and may see it throw down a serious challenge to the segment-leading Ford Focus in terms of dynamics.

For starters, we suspect the 3’s steering is not too far short of Ford’s brilliant set-up in the Focus. Mazda has wisely ignored multiple modes, instead providing one fixed setting that begins with a natural, medium weighting at maneuvering and parking speeds, and which doesn’t change dramatically when on the move. 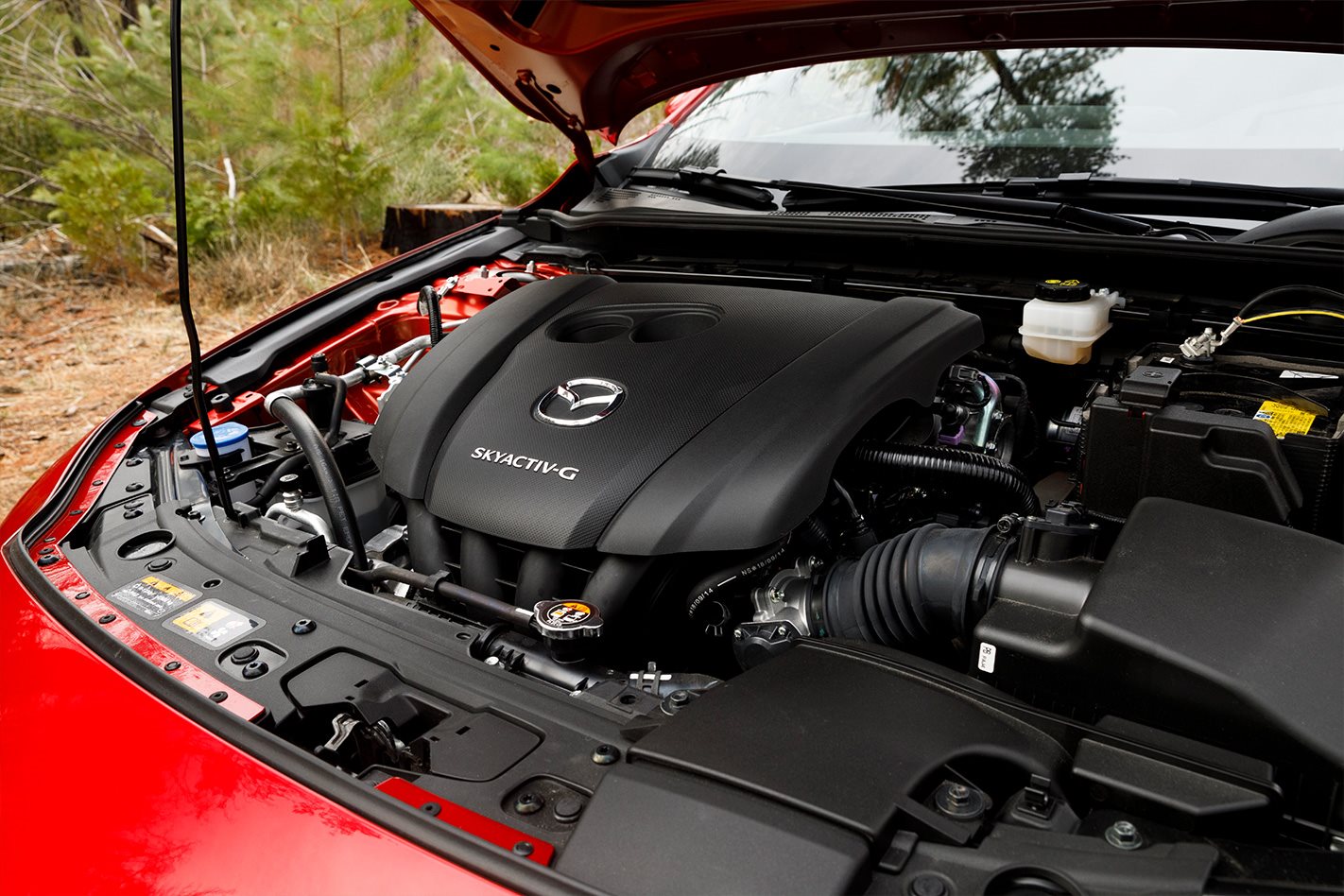 It’s gifted with an oily slickness that never feels gluggy or viscous, and has a just-right return rate when self-centring out of a round-about, for example.

At freeway speeds it’s relaxed but not aloof, while in the twisty stuff it never loads up excessively, and almost fades into the background to allow you to fully concentrate on exploring the chassis balance... which, we are happy to say, retains that pointy, engaging quality that Mazda has now built into its DNA.

Keen drivers will lap up the precision with which you can place the nose when pushing on, then smile at the progressiveness of both adhesion breakaway and tail’s keenness to get involved.

Admittedly, the sedan we drove was fitted with 18-inch all-season Toyo rubber, so the speeds at which this was all happening was not exactly hot-hatch velocity. Still, there’s no denying that the 3 has involvement and adjustability oozing from its pores. 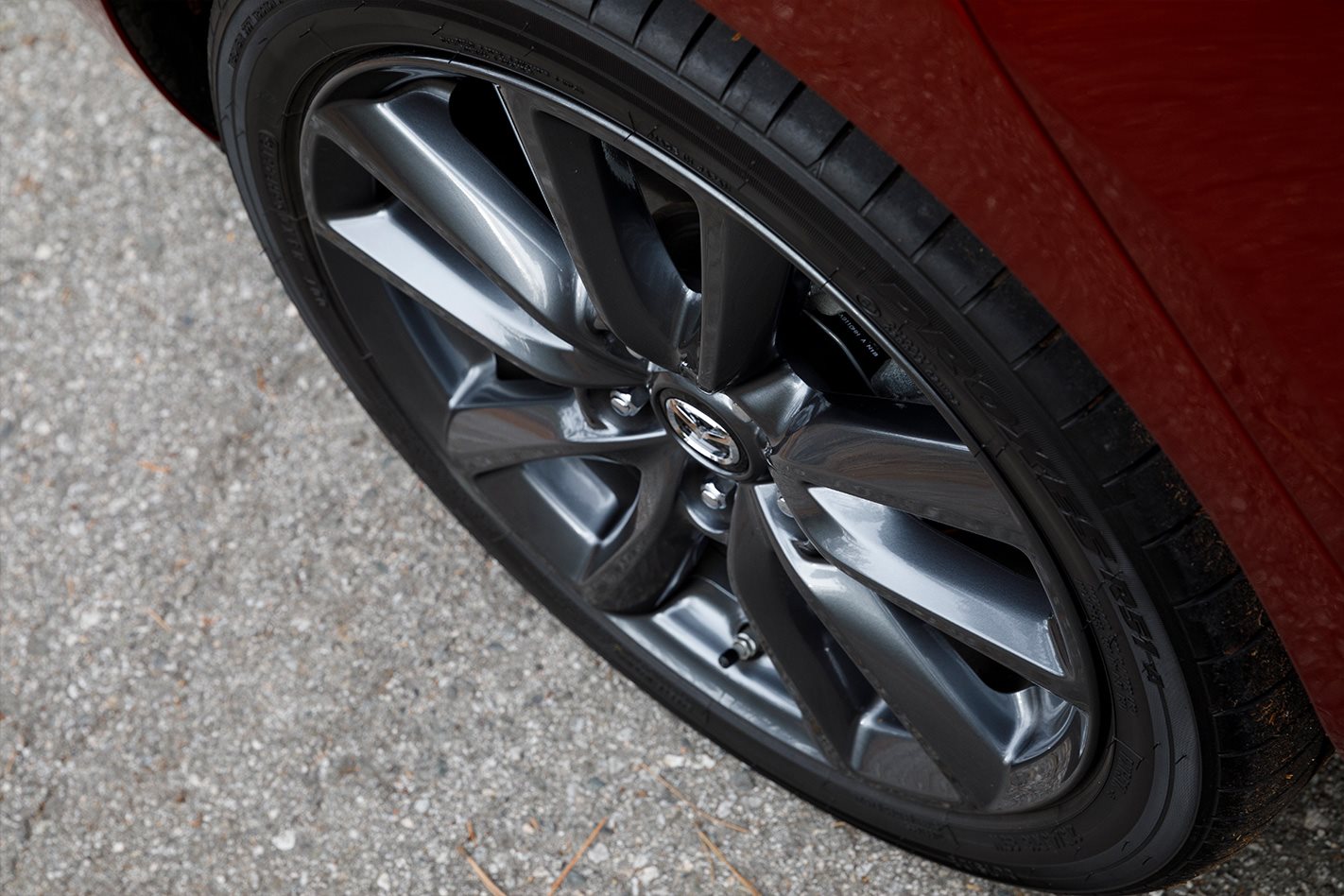 In the hatch, which was on regular summer-spec 215/45R18 Toyo Proxes A40s (representative of what Oz cars will run) there was more chassis grip and goodness to tap into, even if the Euro-spec (read; emission-capped) 2.0-litre engine we drove, with just 90kW/ 213Nm, had a top-end that was weaker than prison coffee.

The 2.5-litre was obviously zestier and more fun, but the fact is that the two engines currently offered in the outgoing 3 will carry over with only a bunch of combustion-efficiency changes, leaving the 2.0-litre with unchanged outputs (114kW/200Nm) and minuscule gains for the 2.5 (now 139kW/252Nm.)

Yes, those torque figures, both delivered at 4000rpm, aren’t the most muscular numbers getting around this class. (The potentially game-changing SkyActive X engine, with supercharger and compression-ignition technology, is not due until Q3 of this year.)

Some buyers will no doubt be tempted by the gruntier midranges delivered by the turbo-fed Volkswagen Golf or Focus. But those who do stick with the 3 will be rewarded with crisp, linear throttle response, and superb suppression of unwanted engine noise, so chasing revs is no chore. 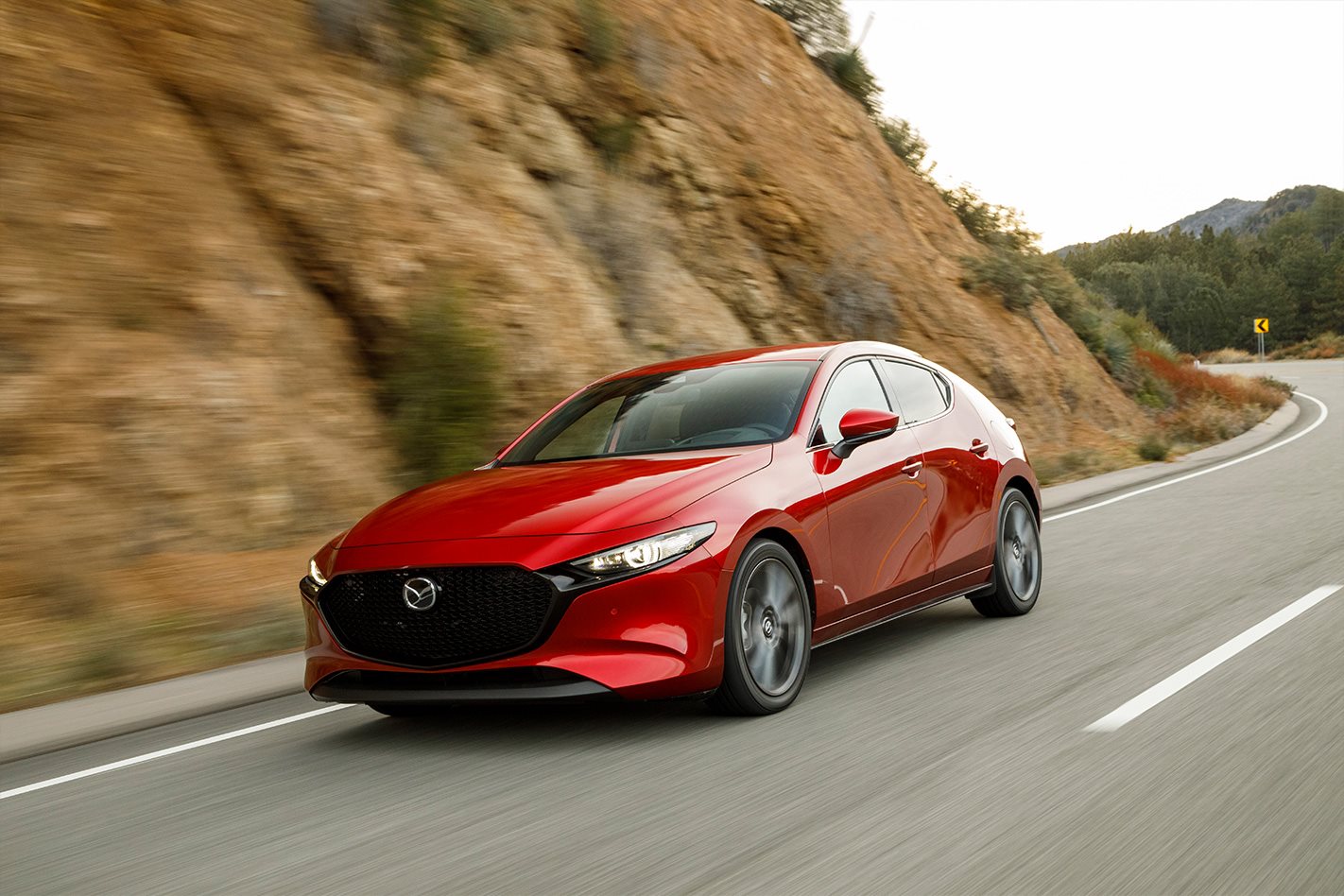 From inside the cabin, it sounds as though Mazda has doubled the firewall thickness for this generation, only allowing a cultured, distant tune of mechanical harmony to make it to your ears.

Both transmissions are excellent, too. Any 3 buyers seeking extra driver connection and reduced cost of entry will be rewarded with a beautifully slick, precise shift action through the six manual ratios, paired with near-perfect clutch weight and throttle tip-in.

The auto, meanwhile, has seen both mechanical upgrades and a raft of software changes to improve both response and refinement. In Sport mode, it manages two seemingly contradicting qualities, being both eager to drop one or more ratios in response to throttle kick-down, yet does it with a cushioned softness that eliminates any jerkiness or shift shock.

The prospect of this transmission fitted with paddle shifters, paired with the predicted grunt and linearity of the supposedly torquey SkyActiv-X engine, is properly tantalising. 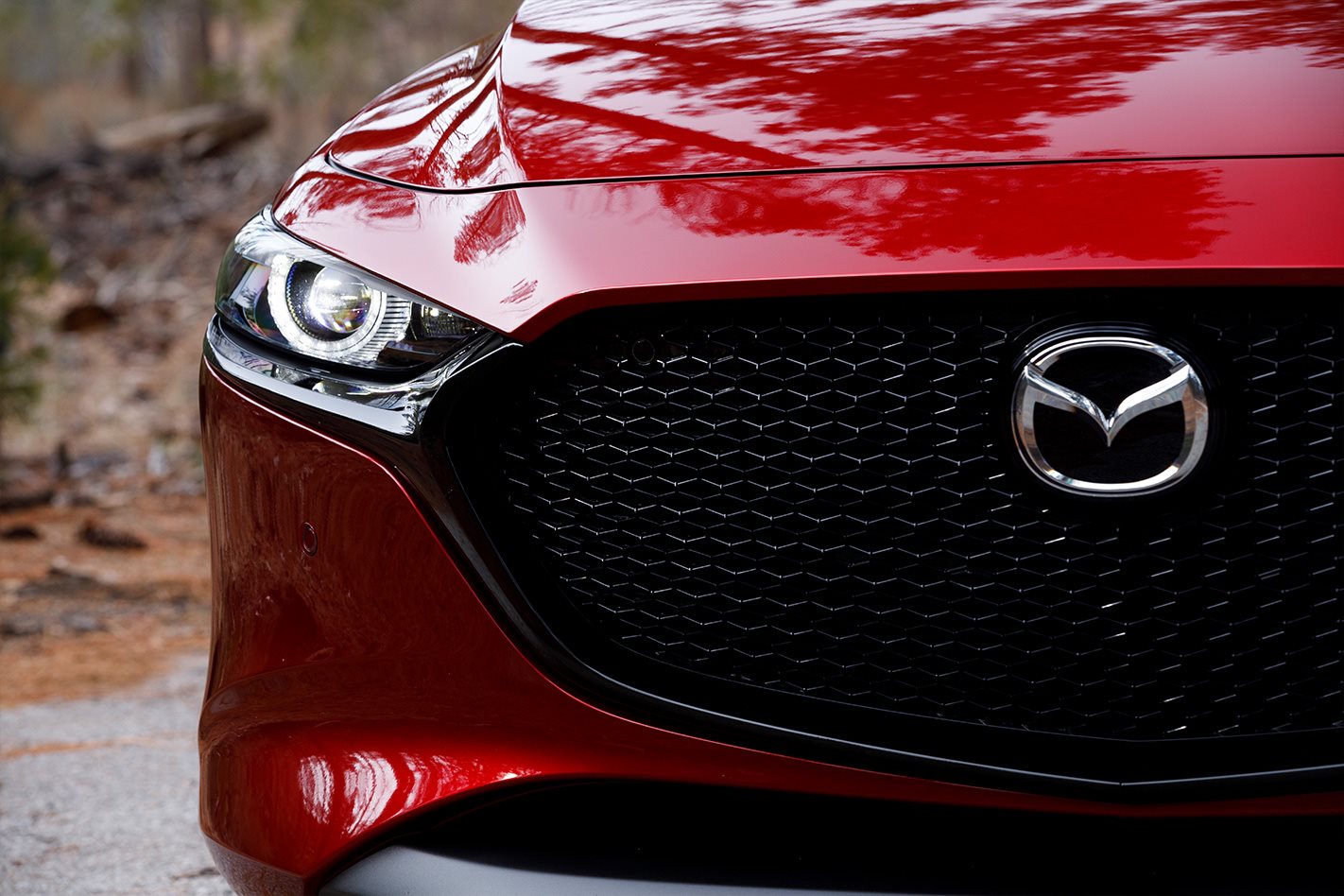 The new 3 is vastly improved over the outgoing third-gen model, and presents as a deeply impressive, ultra-well-rounded small car. Refinement takes the biggest leap forward, but the new 3 also comprehensively ticks the boxes for dynamics, ride comfort, cabin quality and style.

Only the lack of packaging advantages from the bigger body, as well as the question of engine strength, stops it short of a clean sweep.

The latter seems certain to be addressed when the new SkyActiv-X engine is offered around October.