The Toyota Prado should be a familiar machine to most Australians. As one of the most (if not THE most) popular large SUVs in the country, you can’t travel far down any Aussie street without seeing one. Here we take a look at the top option in the range, the Prado Kakadu. Loaded with mod-cons and boasting some unique off-road gear to set it apart from its brethren, the Kakadu doesn’t come cheap – but is it worth the expense?

First things first: the pricetag for the Prado Kakadu is a fairly staggering $84,119, putting the big Toyota well and truly on the wrong side of the Luxury Car Tax threshold and making it more than $10,000 more expensive than the next variant down the Toyota Prado hierarchy: the VX.

In the context of its segment, that’s not amazing value. You can get a mid-spec Land Rover Discovery (a much newer vehicle in every respect) for less dosh, while Ford’s top-shelf Everest is $10K cheaper and offers more under-bonnet oomph. Want some serious muscle? Nissan asks for just $71,990 for its V8-powered behemoth Patrol Ti, a car which boasts loads more space and towing capability than the Prado.

However, look beyond the dollar figure and you’ll find that the Kakadu compensates by packing in heaps of equipment – a lot of it being stuff you simply won’t find elsewhere at the price point.

According to Toyota, the Prado Kakadu consumes an average of 8.0 litres of diesel per 100km, while the first six scheduled services are capped at $240 per visit, seeing you out to the first three years or 60,000km of ownership. 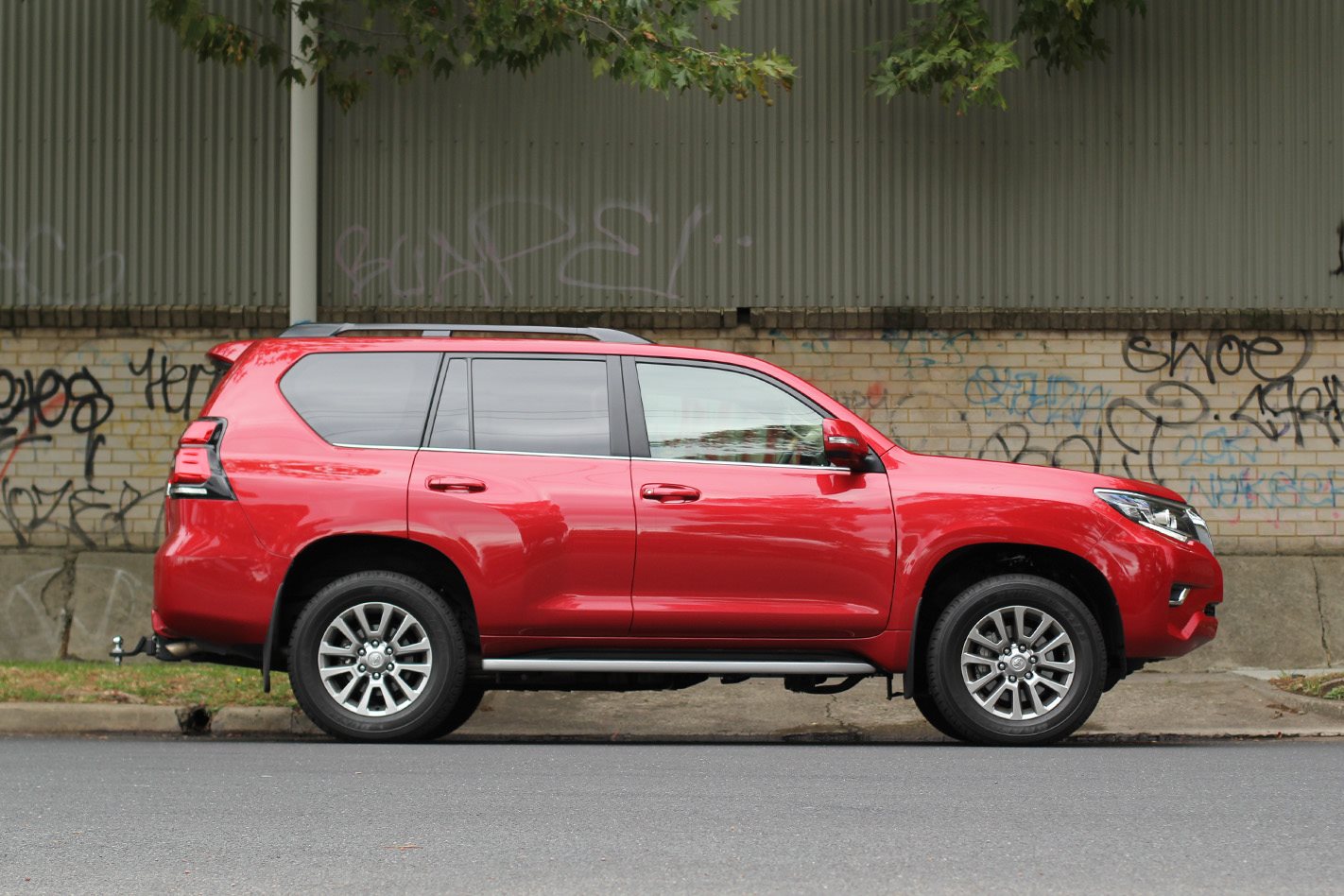 If you’re a gadget fiend, the Prado Kakadu delivers what you’re after. Jam-packed with gear, the Kakadu spec is brimming with mod-cons designed to make life on the road a little bit easier.

There’s driver-assist stuff like active cruise control and blind spot monitoring (invaluable for such a big car, even one with such generous wing mirrors), plus a top-down camera view that uses the four-camera array of the Kakadu to show you whether you’ve managed to park between the lines – or not. 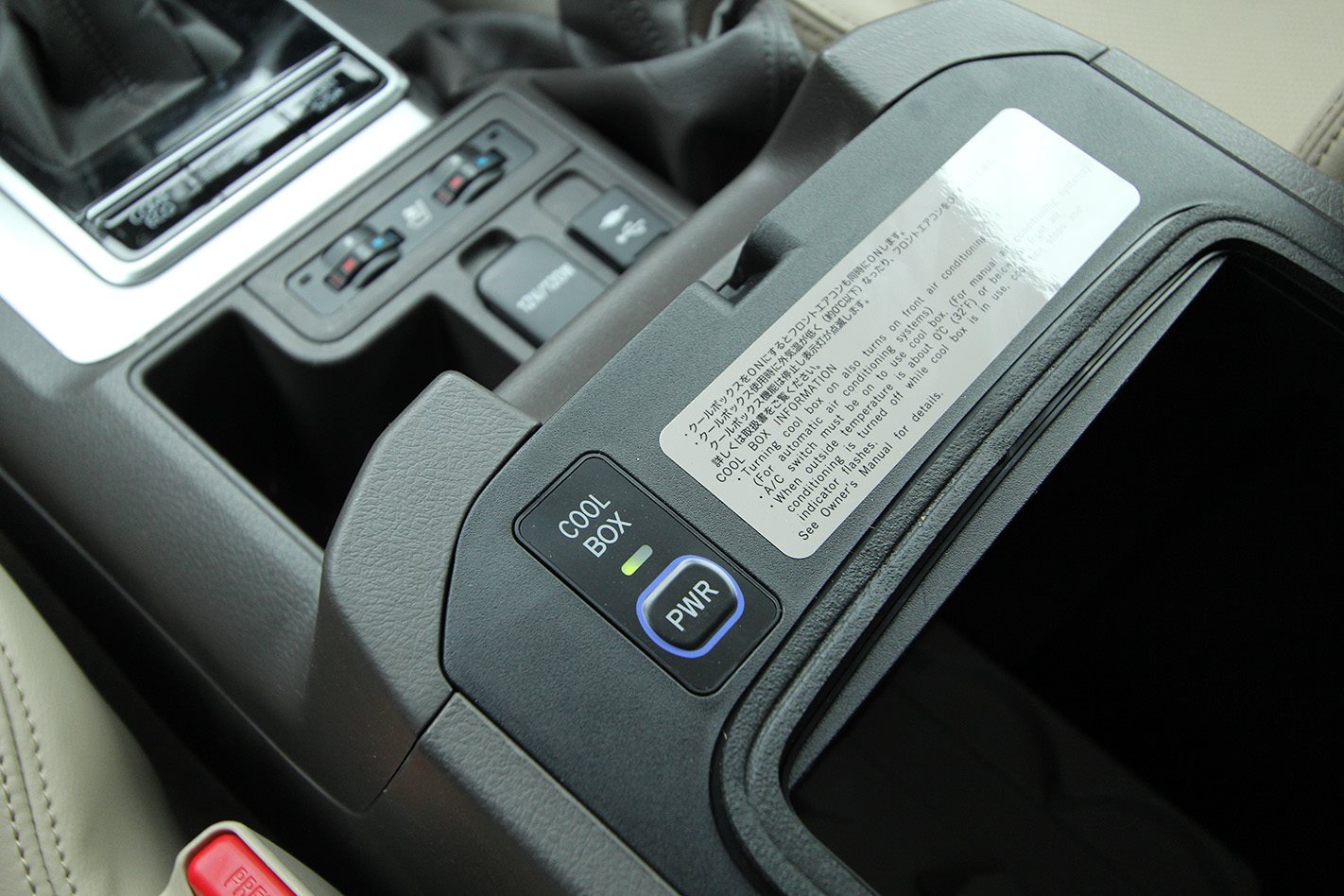 Engage low-range, and another party trick appears on the central screen. The Prado Kakadu is equipped with a bevy of external cameras, and when the car is placed in any of its off-road modes they activate to show you exactly what obstacles might be around you, the car’s angle of inclination, and the path your tyres are going to take. It’s added peace of mind when picking a tricky line on a tough offroad trail.

Downsides? That infotainment screen is small, somewhat slow to respond to touch inputs and hobbled by dated graphics and a cramped visual presentation. Not only that, there's no smartphone mirroring capability by either Android Auto or Apple Carplay - a feature that is fast becoming standard-issue in new cars these days.

The Prado might not be Toyota’s biggest 4x4 in Australia (that title is easily claimed by the hulking Toyota Landcruiser 200-series), but it’s nevertheless an imposing vehicle.

Measuring just 5mm shy of 5 metres long, 1885mm wide and with 2790mm between the front and rear axles, you’ll need a decent-sized driveway or car spot to park the Prado Kakadu in. It’s tall too, at 1880mm from ground to roof, and as such the view out the windshield is definitely a commanding one.

It’s a big unit, that’s for sure, but certainly a more manageable size than its Landcruiser bigger bro or a Nissan Patrol. In Toyota’s family tree, it sits about smack-dab between the Hilux-based Toyota Fortuner and the Landcruiser 200 – though interestingly the Fortuner gives more space behind the third row’s backrest – enough to slide an esky – whereas the Prado can only accommodate a handful of shopping bags when all seats are raised. 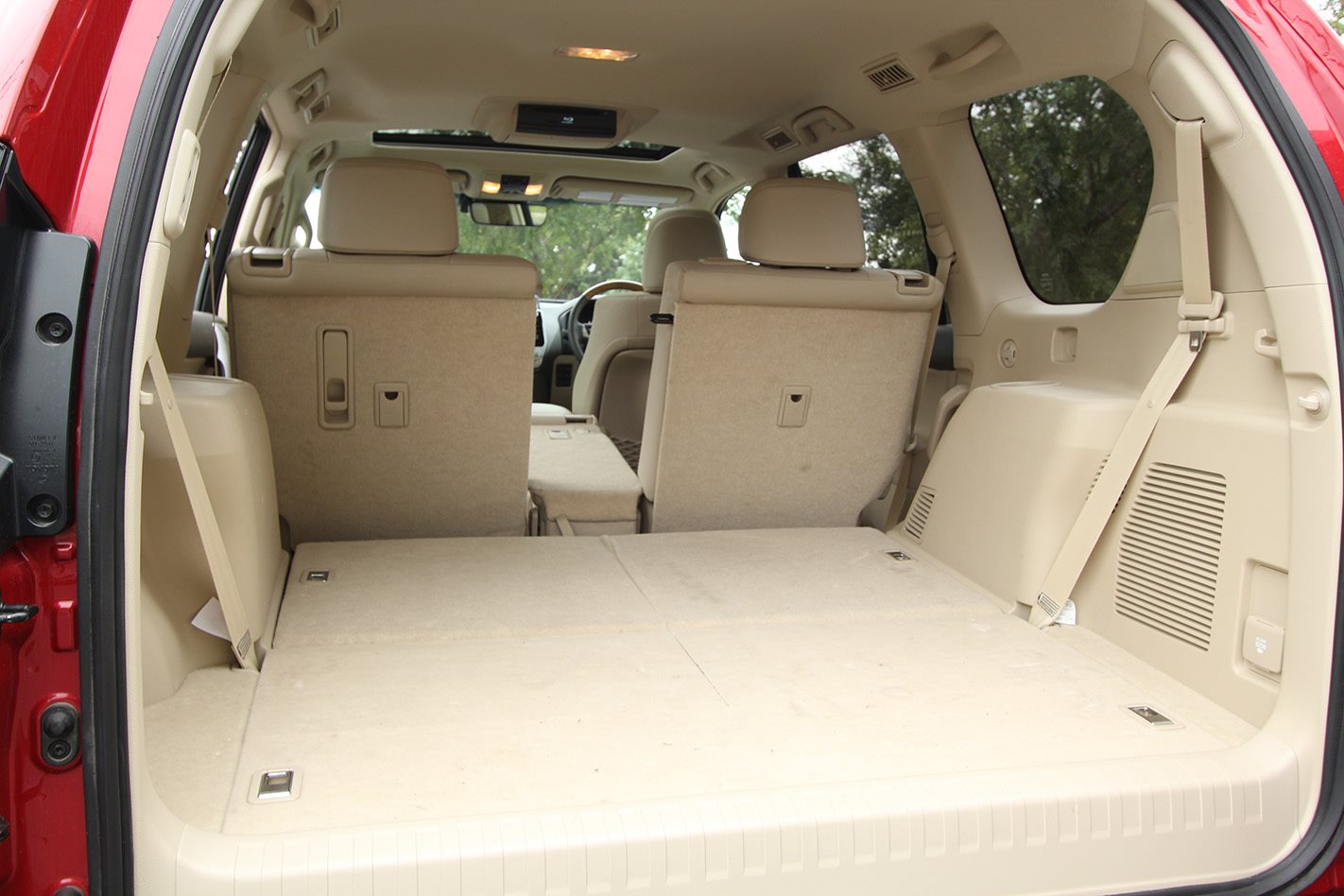 In 2011 ANCAP awarded the current-generation Prado a full five-star safety rating, though be aware that crash safety standards and testing methodology differed greatly eight years ago.

It's well-built and feature-rich, that's for sure, but it's undeniably quite dated. The Prado is an old vehicle by now, with the current generation rolling up on ten years of production. The clunky button-heavy design of its cabin, though functional, is definitely quite behind the times as a result. So too is that high-mounted infotainment screen, which lags well behind the status quo when it comes to smartphone integration and graphic presentation. 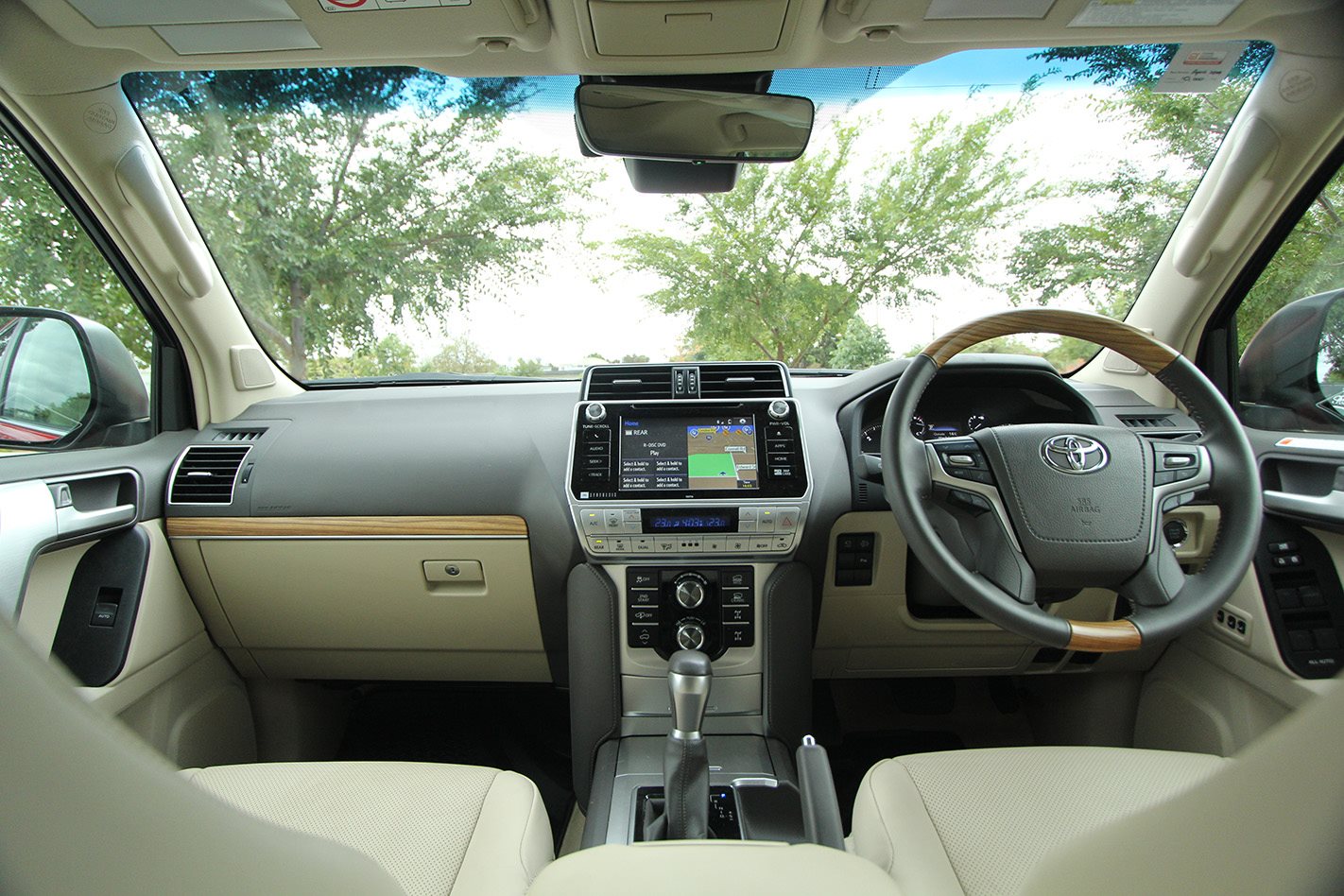 But the Prado's raison d'etre is to cart a bunch of humans over whatever terrain you want to point it at with good comfort, and in that respect it succeeds. The Kakadu's two front seats may as well be thrones, such is the imperiously elevated view they provide of your surroundings. Trimmed in soft leather, heated, ventilated and electrically adjustable to the nth degree, the comfort on offer is also fit for a king or queen – though the optional beige colour scheme isn't something we'd necessarily spec. Good thing there's an all-black option. 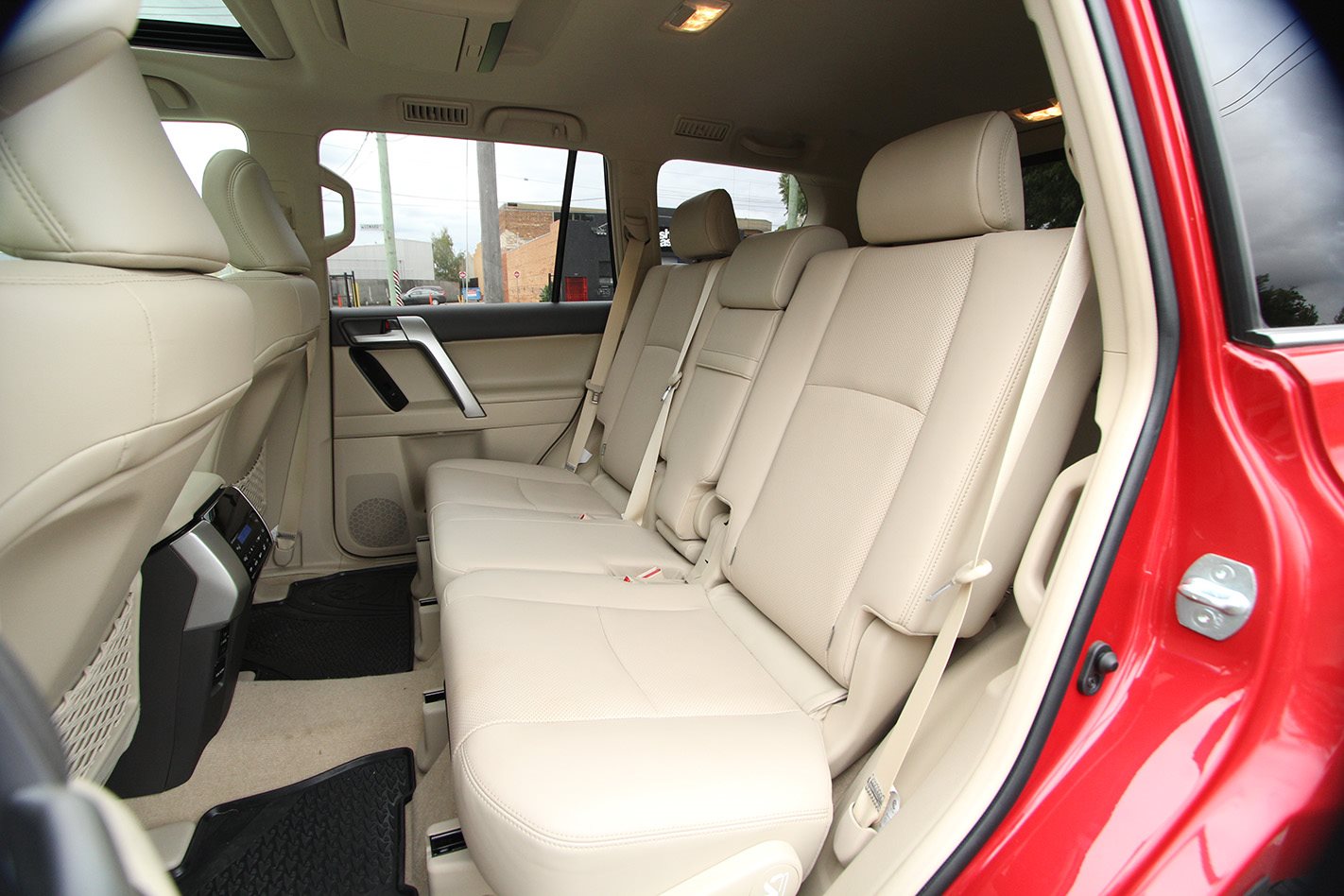 Plus, as a three-row SUV it has plenty of space for seven adults if you scooch the sliding second row forward a touch, liberating a few more centimetres of foot room for those in the rearmost two seats.

And speaking of which, in the Kakadu it’s a cinch to deploy and use those seats. Unfurling and stowing electrically via a set of buttons located just inside the tailgate (and another set accessible from the rear doors), those third row seats actually have reasonably good ingress and egress characteristics. There are plenty of grab handles to hold onto as you clamber in, and the kerbside second-row seat tilts and slides forward at the pull of a single lever. 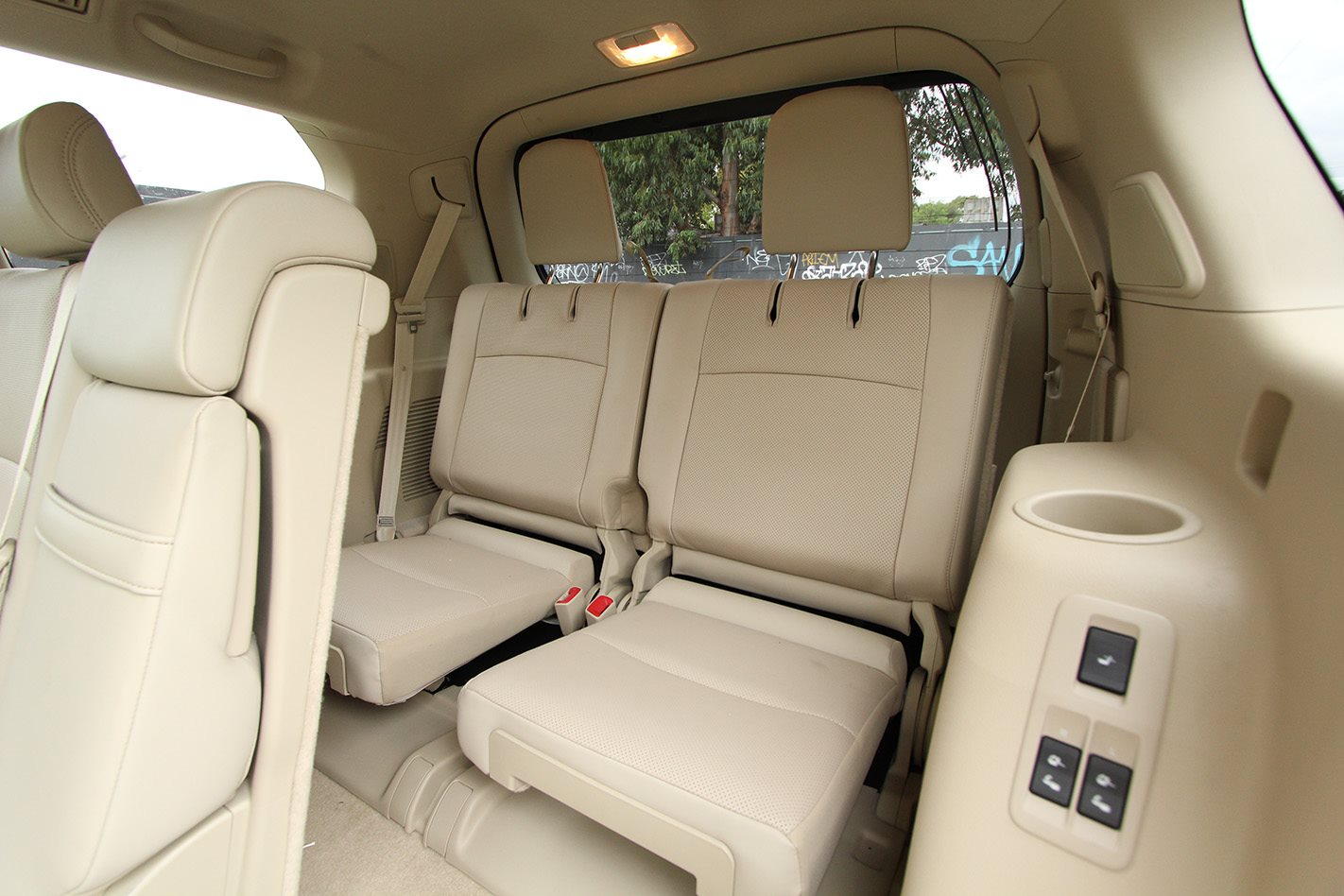 On top of that, every occupant in every row has either a cupholder or bottle holder (or both), and roof vents keep those in the second and third row cool in summer. The rear cabin also operates on its own independent air conditioning circuit, which greatly boosts the Prado’s ability to chill the cabin in hot Aussie weather. Not cool enough for you? There’s a sizable fridge between the front seats, one that can store a whole six-pack of 375ml cans and chill them surprisingly quickly – perfect for those long road trips.

The roof-mounted DVD player is primitive by today's standard, with auxiliary audio/visual input being achieved by RCA connectors instead of something more modern, like HDMI. Kids will also need to crane their necks up to actually see it – a seatback-mounted solution would be ergonomically better, no doubt. 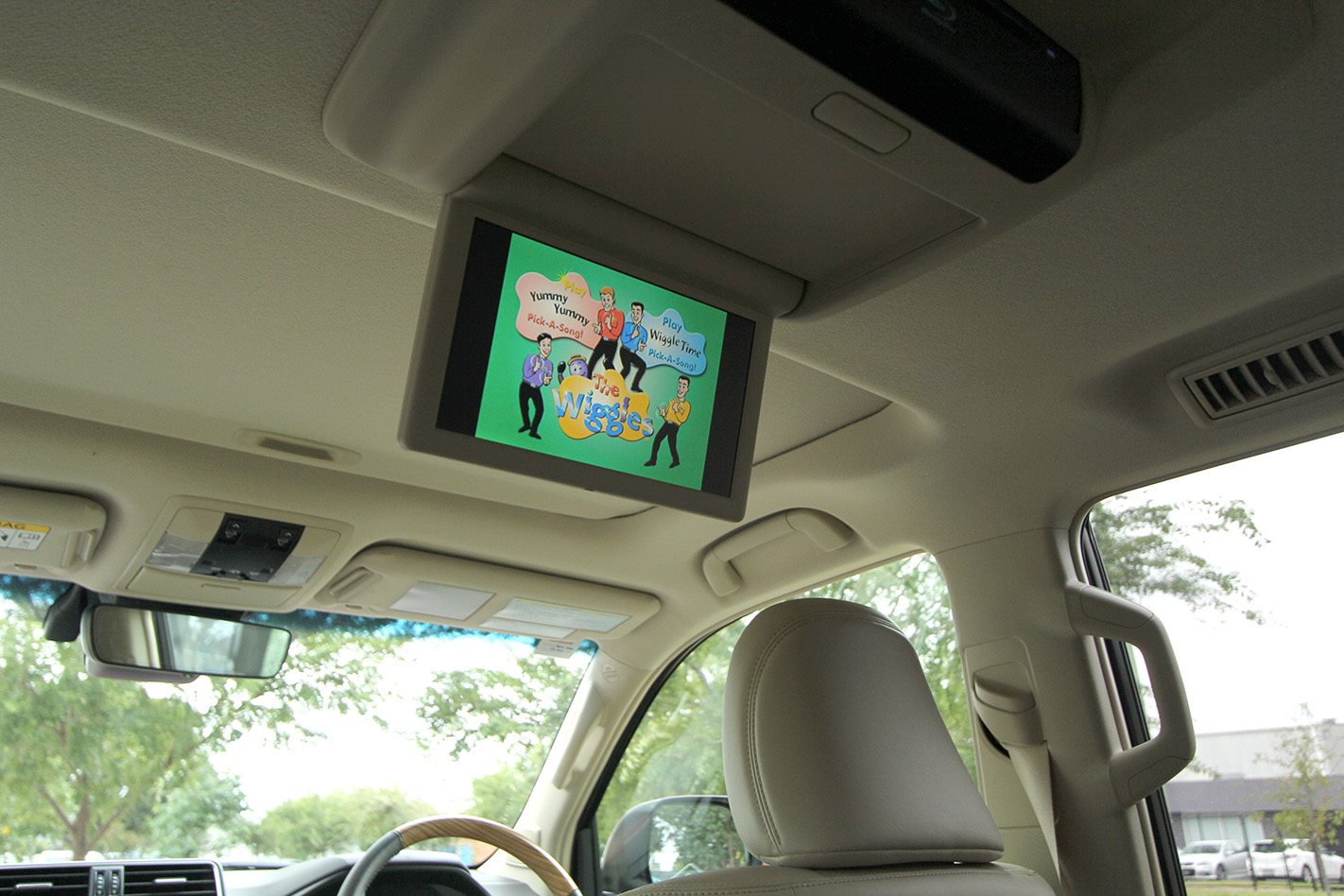 The Prado Kakadu is built for eating up obscene amounts of kilometres, whether they be long asphalt highways or lonely gravel country roads. Its 'Kinetic Dynamic Suspension System' uses air springs and active hydraulics to iron out all but the nastiest of surface imperfections to deliver a cushy ride, and the steering is reasonably direct yet fingertip-light.

It's a recipe that reduces fatigue at the wheel and promotes comfort for your passengers, and when the road ends and offroad trails begin, the Kakadu shows off the rest of its impressive cababilities. Unlike other models in the Prado lineup, the Kakadu's suspension is unique. 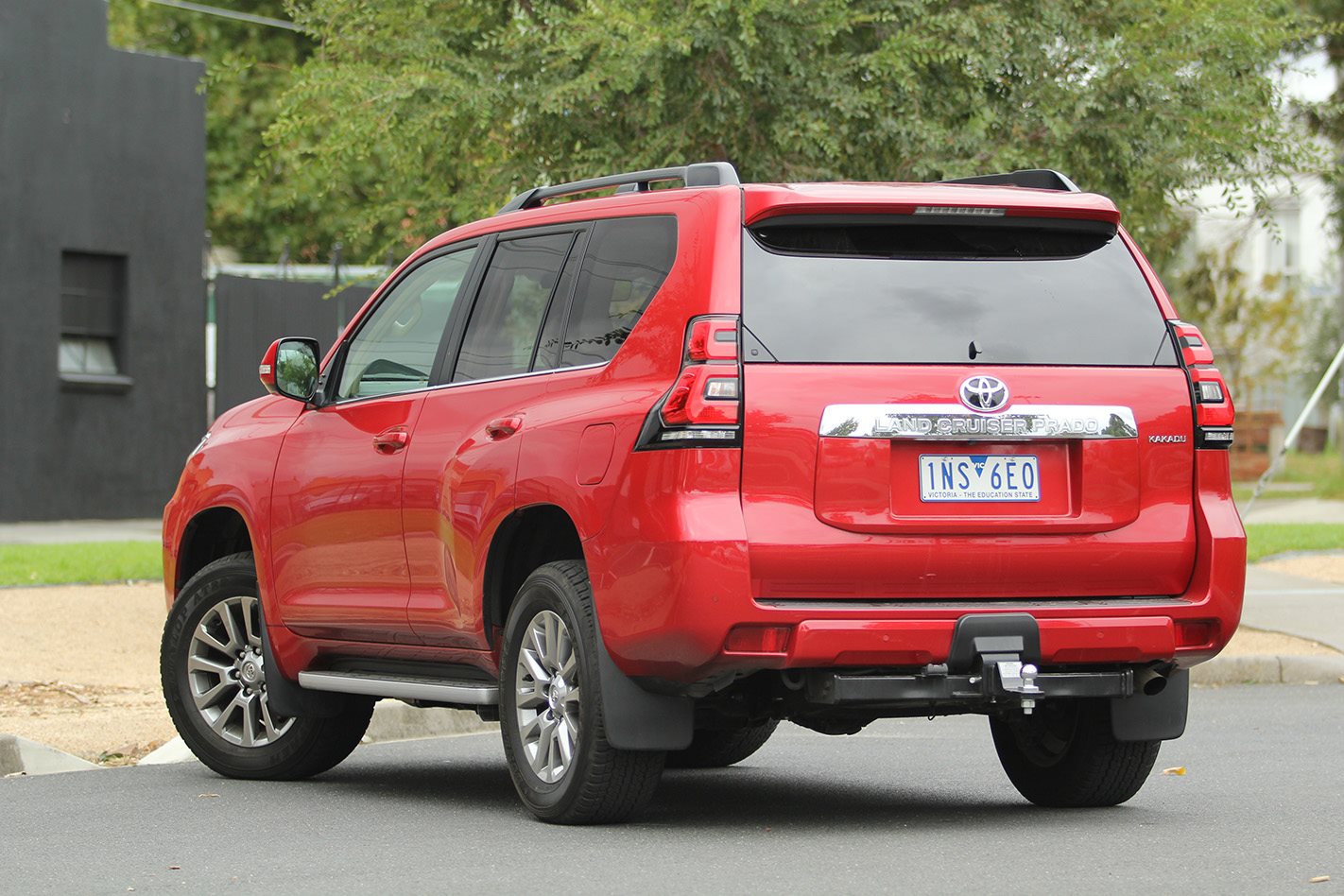 All Prados feature permanent 4x4, but twisting the Kakadu’s transfer case dial to 4WD-low allows you to switch between a myriad of surface-specific offroad modes to conquer whatever trail lies between you and your campsite, changing the behaviour of the hydraulically-linked dampers and chassis electronics to maintain traction. Get properly stuck, and a locking rear differential is there to help haul you out.

The 2.8-litre turbodiesel engine and six-speed automatic transmission combo don’t feel sprightly in the slightest, but we’d cut it some slack considering the Prado’s huge 2.45-tonne kerb weight. That weight also puts its fuel efficiency into perspective too, with a claimed 8.0 litres-per-100km average – and just 7.0L/100km on highway – the Kakadu’s thirst is restrained considering its size. 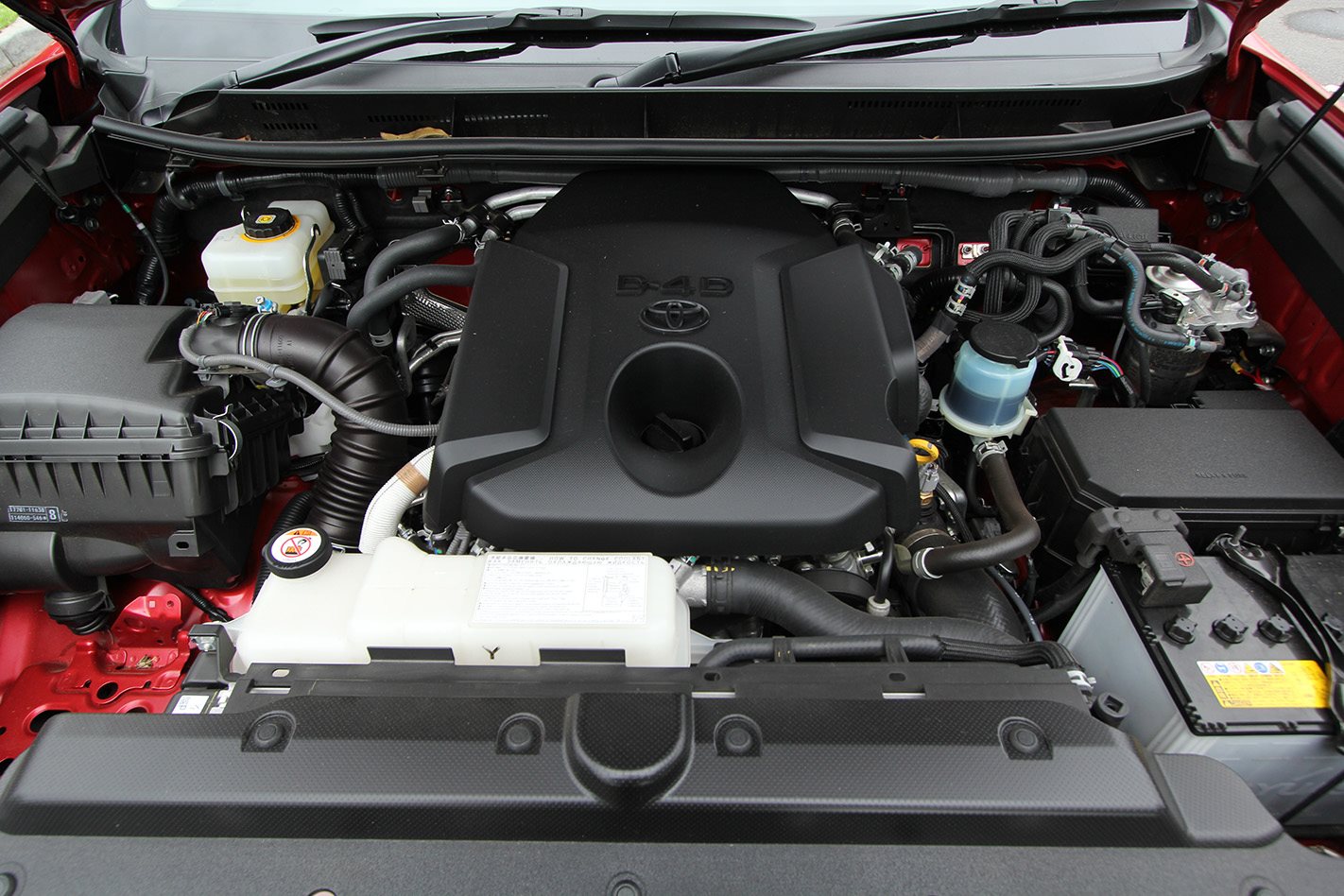 And that makes it best suited to eating up heaps of highway miles. The engine is relaxed and happy to lope along at low rpm at freeway speeds, and the Prado’s excellent cabin isolation means you’ll be just as relaxed as that powertrain. A three-tonne tow capacity also endears it well to roadtrippers.

However, if big trips are what you’ve got planned, maybe don’t spec the ‘flat tailgate’ option like our test car. It moves the spare wheel from the rear door to beneath the boot floor, deleting a 67-litre auxiliary fuel tank in the process and trimming the Prado’s potential range by a colossal 787km to ‘just’ 1087km - which could make the difference between making it to your destination on time, or becoming stranded in the middle of nowhere. 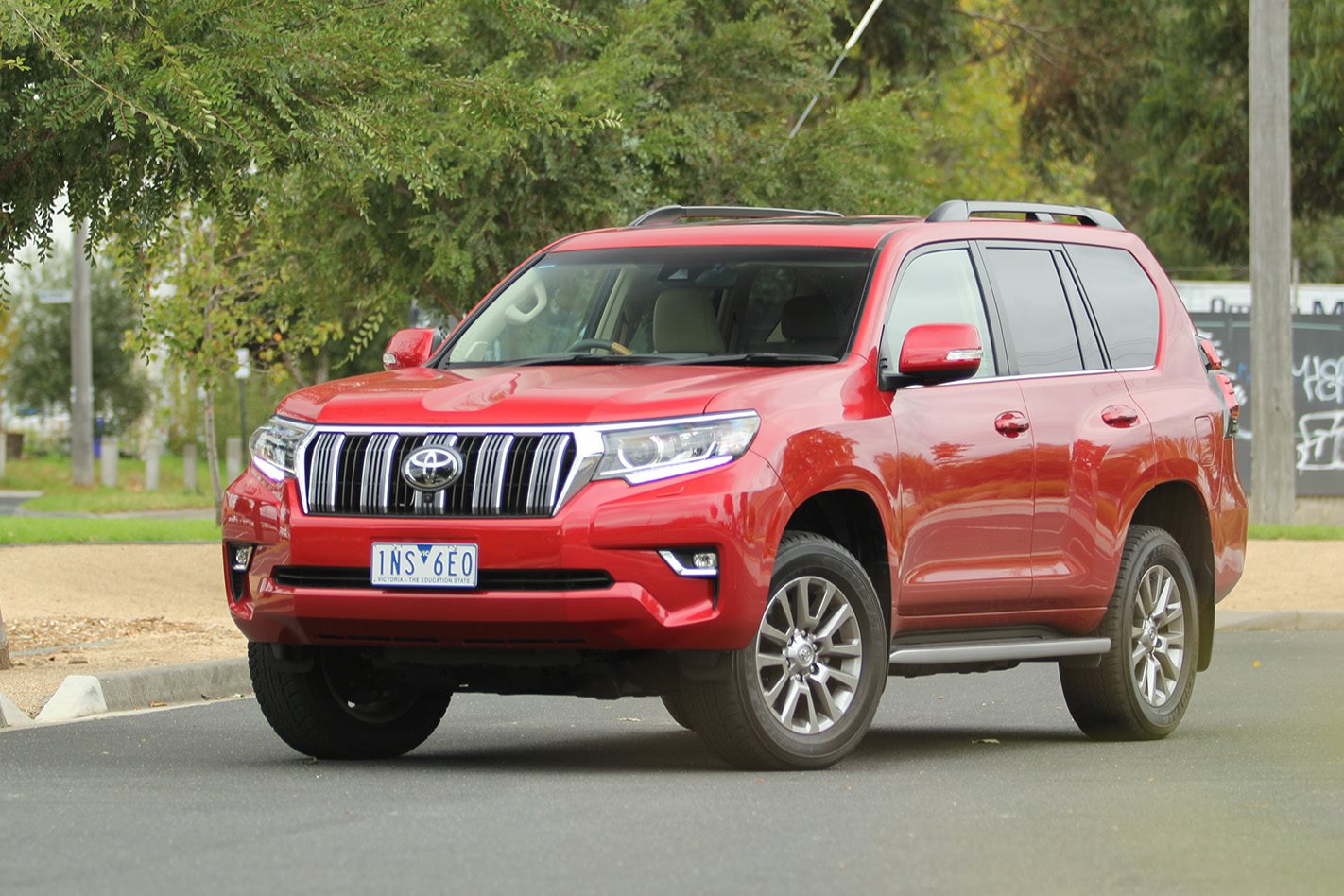 There’s little wonder that the Prado has been the darling of the Grey Nomad set for so long – it’s simply the best tool for the job.

But the Kakadu flagship goes an extra step by offering unique suspension and offroad modes designed to get you even further away from the blacktop. For adventure-seekers, that alone could be worth the fairly substantial premium demanded by the Kakadu.

Others may be more drawn to the sheer comfort levels of the top-spec Prado. As a lounge room on wheels, it is properly exceptional. Yes, the décor is dated by now, but the packaging, seating and isolation from the surrounding world is exceptional – not just for a vehicle of the Prado’s age, but for anything. If you can afford it, the Prado Kakadu should not disappoint. 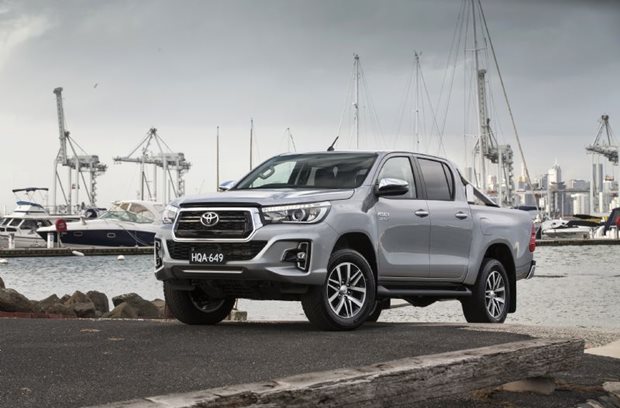 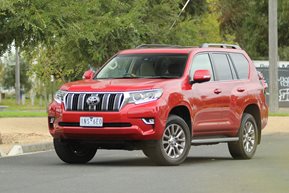