This is new for me, in more ways than one. I’m not only the FNG at Wheels (which I’m assured stands for Fantastic New Guy), but barely a week had elapsed at my new desk before I was on my way to collect my brand new long-termer from the new car delivery garage at Audi Centre Melbourne, which was only recently renewed.

Like the barely dry ink on my business cards, everything on my box-fresh Audi TT Sport, from its unblemished leather-and-microfibre upholstery to its glossy solid white paint, is fresh, sparkling and pristine. How long will it take for the lustre to fade? I’ll have six months to find out.

On day one, though, it was time for induction. Salesman James put me through the standard customer-delivery process to give me a taste of what new Audi buyers experience before getting the keys. I’m glad that he did. Though I’m no stranger to the TT, getting an in-depth one-on-one tutorial on the car was invaluable.

With just one screen in the TT’s slick cabin, every infotainment function and settings menu must be accessed from what is otherwise the car’s instrument panel. It’s the ultimate digi-dash. Audi named it Virtual Cockpit, but I call the TT’s 12.3-inch TFT screen a potential minefield for tech novices. Even as a seasoned car tester, I learned about sub-menus I never knew existed and features that would have taken weeks to figure out on my own. 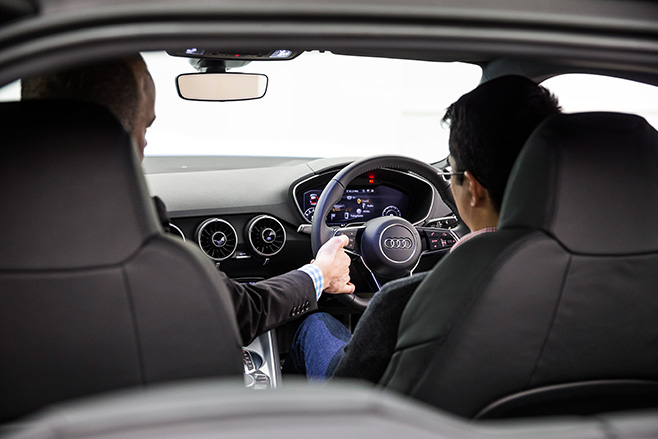 But does having just one screen in a car make sense when it needs to display critical information to the driver and be the primary interface for phone, audio and sat-nav? Sure, so long as you don’t want to reset your home address while driving and you’re comfortable with the idea that your passenger might, at any moment, start fooling around with what’s displayed on your screen. I admire Audi’s commitment to making the TT as driver-centric as possible, but lord help the poor passenger who dares touch that MMI dial while I’m driving.

It looks damn cool, though. The Virtual Cockpit display wouldn’t look out of place in a concept car, which is exactly where it came from (the Audi Allroad Shooting Brake Concept from the 2014 Detroit auto show).

Is it a menu-laden nightmare? Not really once you get used to the way the interface works. If you can get the hang of how an iPhone works, mastering the TT’s infotainment system should come naturally.

“Does anyone skip this?” I ask James. “Do any customers just forgo the tutorial and jump in the car and drive?”

“Absolutely not,” he says firmly.

I’m normally the kind of guy who avoids reading the owner’s manual when I buy a new TV, but I paid close attention as James showed me how to call my mum using the voice controls before educating me on how to adjust the dwell time on the exterior lights after the car is locked. As intuitive as the interface is, I’m happier learning its finer points in the comfort of a showroom garage instead of while I’m barrelling down a highway. 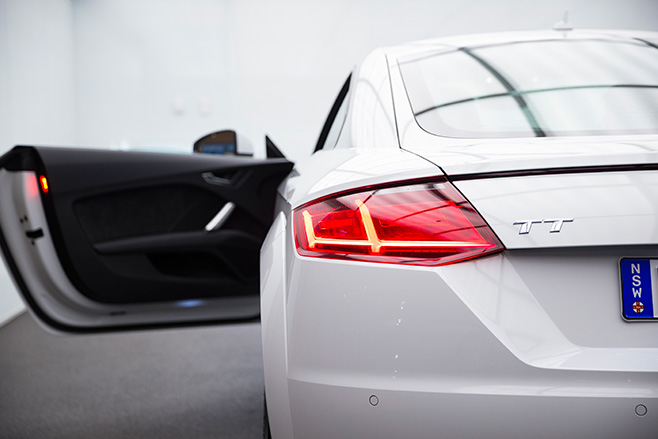 After four weeks behind the wheel there’s not a whole lot to complain about. The Sport’s 169kW/320Nm 2.0-litre turbo-petrol four may not have the extra muscle of the TT S variant, but it’s a willing performer at almost any point on the tacho – especially in its torque-laden mid-range.

I wish I had a manual transmission, but it’s simply not available in the TT Sport quattro. That’s a shame because I’m struggling to warm to the sometimes-excellent, sometimes-frustrating dual-clutch six-speed auto. A crack in the facade already? Let’s give it some time.

I don't mean to brag, but I’m rather musical. I can play the trumpet, you see. At one point I was even performing brassy tunes on my gleaming horn at least once a week.

Impressive, yes? Sure is, if you ignore the fact that I am and will continue to be quite shite at playing the trumpet. Like many kids, I learned to play as a teenager, discovered I was terrible and then ditched it the instant I could drop music as a school subject.

But even though I suck at it, I can still legitimately say I can play the trumpet. Just like Audi can claim the TT is a four-seater.

It has four seats, therefore it can fit four people. Right? 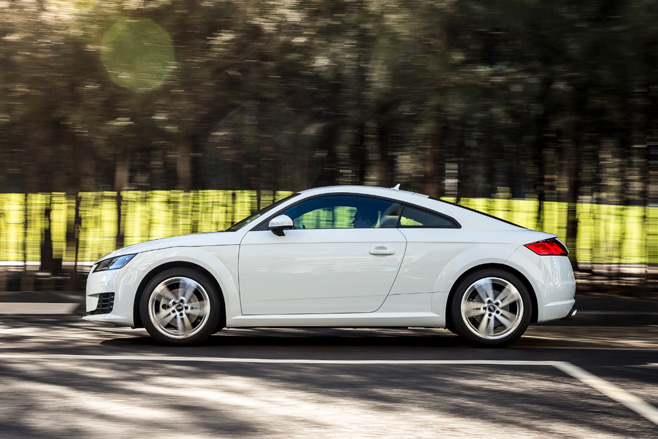 At 5’8” I’m not a tall guy, but even being of below-average height isn’t enough to allow any degree of comfort in the back of an Audi TT. The rear backrests are bolt-upright and legroom is almost non-existent unless the front seats are pushed all the way forward. Acceptable if you’re a double-amputee, not so great if you have a regular number of limbs.

Sitting right under the glass also means your backseaters will get red necks on a sunny day – better slot some tubes of SPF30+ into the rear cabin storage cubbies.

I tried to sit back there, I really did. In the end, sitting side-saddle was the only way to keep deep-vein thrombosis at bay, so the other rear seat must be kept vacant. A few weeks ago I made a 6’1” colleague sit back there for a trip across town; he’s still not talking to me. 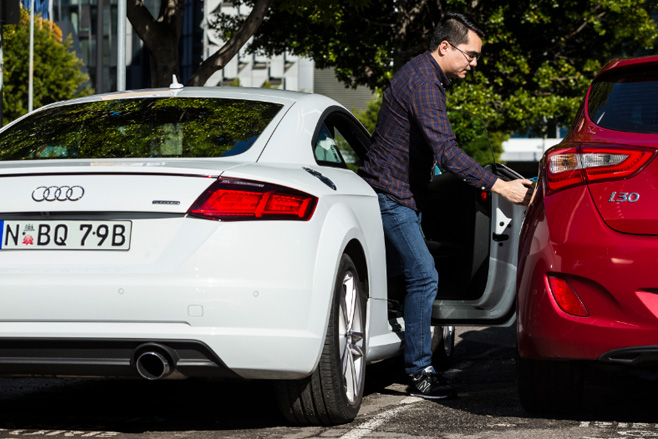 I pity those who decide to travel four-up in a TT unless they’re little kids.

And Audi knows the TT’s back seat has tremendous shortcomings. Why else would the company slap a sticker on the inside of the hatch, warning you not to slam it into the craniums of those unfortunate enough to be sitting in the back? That’s a tacit admission that the TT’s back seat could do with a smidge more room.

But sports cars are selfish by design. They’re built for the driver, nobody else. Audi didn’t put a regular infotainment screen in the TT for that very reason. All of those functions are controlled through the instrument panel. Can the passengers see what’s on the screen? Not really, but that doesn’t matter because this car is not built for them.

So here’s a better idea; turf those back seats, expand the TT’s (already useful) boot and forget about accommodating those +2 passengers in miserable discomfort.

Are you one of the many misguided fools who dismiss the Audi TT as a mere hairdresser’s car? Repent, for the four-ringed fastback is, in actual fact, pretty handy at the kind of performancy things you wouldn’t associate with a salon sportscar.

Keep in mind that my TT Sport quattro long-termer is just one rung up from the very bottom of the TT hierarchy. It’s not the hotter 210kW/380Nm TTS quattro, and it’s a long way from the monstrous 294kW/480Nm Audi TT RS that tops the range. Nevertheless, the TT Sport’s on-road performance has hinted that it would shine fairly brightly in a more demanding environment.

On mountain roads there were suggestions of a playful chassis lurking behind the electro-nannies, and its 169kW 2.0-litre turbo and six-speed dual-clutch combo deliver terrific thrust. But the only safe way to truly explore its limits is at a circuit, and Wakefield Park would be the venue. 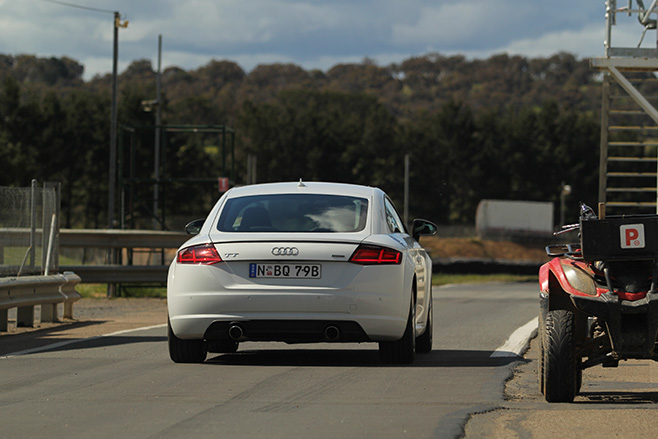 On the track, stability control gets in the way of fast laps. However, engaging the less-intrusive ESC Sport mode allows more slip at the rear, which assists turn-in by taking load off the front tyres. Switching the aids off entirely unlocks lift-off oversteer shenanigans, though to the detriment of lap times. As we know, sideways is slow.

In any mode, the TT feels incredibly light on its feet. Credit that to its fast-ratio steering rack and its aluminium-intensive construction; at 1335kg empty, the TT Sport quattro is svelte for an AWD luxury car. End result: an entirely respectable 1min 11.7sec lap time with ESC Sport.

Ultimately, though, as chuckable and rapid as the TT Sport is, it’s reluctant to engage in the kind of lairy behaviour that makes a sports car truly joyful. You need to work hard to get its tail out, and there’s no cheeky drift mode to help you keep it wagging. It’s fast, but maybe too unshakeable for its own good.

That said, if you think the base-model TT lacks performance cred, you’d be absolutely wrong. It’s a sweetly balanced machine, with just the right amount of power to match its grip. Put stickier tyres on and it would be faster, but less slidey and less fun as a result.

The only part of the TT Sport that didn’t enjoy the trip to Wakefield Park was the brakes, which couldn’t take the heat. The car’s stability control and brake-based torque-vectoring system appear to punish the rear stoppers most of all. New pads may be on the menu.