The third-generation Toyota Prius is here, featuring a two-model line-up. The cheapest is the fleet-friendly $34,990 Base, but we’re trialling the $43,850 i-Tech that’s of more appeal to mum-and-dad buyers.

The Prius, once lauded as the pin-up car for environmentalists the world over, has been a part of Toyota’s Australian showrooms for more than a decade. The Japanese carmaker has held firm against introducing diesel engines for small cars, instead opting for petrol-electric hybrid systems. This new five-seat hatchback joins the five-seat Yaris-based Prius C and seven-seat Prius V, making “Prius” a brand within a brand.

Fuel economy: The official numbers claim a combined fuel economy of 3.5 litres per 100 kilometres, or about $6 for every 100km travelled at current fuel prices. Real-world figures suggest around 4.6L/100km – higher, but still good in its class. And the engine will use cheaper E10 ethanol-blended fuel that’s supposed to be better for the environment.

Emissions: Yes, diesels can scratch out smaller fuel use figures, but on the flipside they have high, and rather more toxic, emissions compared with petrol-engined cars. The Prius doesn’t, officially spewing out only 80 grams of carbon dioxide per kilometre travelled. 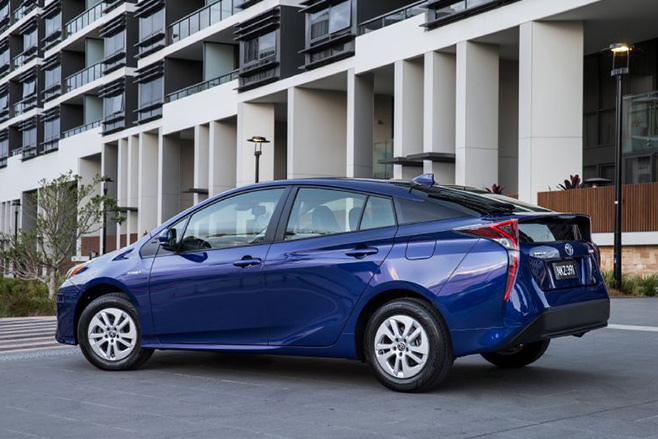 It drives much better: The previous-generation Toyota Prius was Novocaine for the soul, with lifeless steering, a two-stage brake pedal with a poor transition from regenerative to traditional braking, and a soggy suspension. This new one feels more taut and connected with the driver, although the brake pedal still feels a bit strange when the computer kicks in to scavenge stopping power for future use as electrical grunt. The engine, too, has had a big overhaul to give it more pep, although it won’t win every traffic light sprint.

Practicality: The Prius is a big, roomy hatchback. Boot space, at just 502 litres, is compromised a bit by a high boot floor, but the 60/40-split rear seats now flip forward to yield even more load-lugging room. You can comfortably sit four adults, or five if the three across the rear bench are friendly.

It can run silently on electricity for short bursts: All-electric range on the Prius is only a couple of kays at best, but it’s there. You can also switch between four driving modes – full EV that only works with very light acceleration, an “eco” setting that dulls the throttle pedal’s travel to make it really long, a “normal” setting that feels, well, normal, and a “sport” setting that taps the 90kW petrol engine more and gives extra doses of electric motor assist.

Comfort: Outside noise is well suppressed in this car. It does so well that the annoying noise from a fan mounted behind the driver’s seat used to cool the battery pack stands out as it cuts in and out. 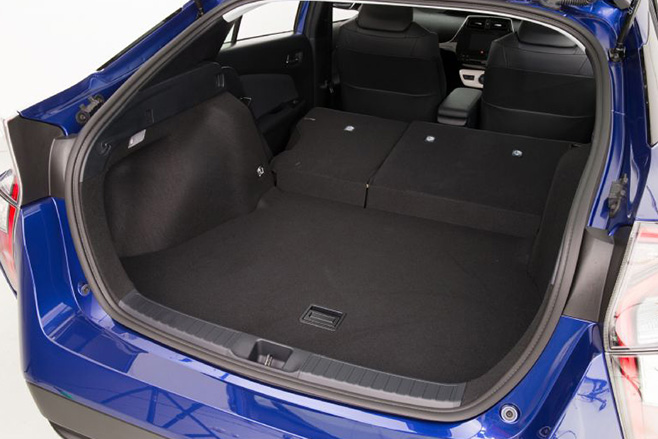 There are good driver aids: If you spend most of your time coursing city streets, the Prius’s suite of driver assist systems is a boon. It includes active cruise control, lane departure and blind spot warning systems.

You can charge a phone wirelessly: It may sound naff, but it is a good feature if your phone is equipped for wireless charging. The floor console-mounted wireless charging system forces you to store your phone there. If you pick it up, it stops charging, providing sufficient incentive to just leave it there and get on with driving.

Rear-seat entry: A sharply swept roofline and relatively small rear doors compared with the long front ones makes jumping in the back a bit tricky for taller people. Duck and drop is the order of the day.

Satellite navigation: The Prius has voice control for what seems like everything but the sat-nav unit. To set a destination, the driver has to stop driving to punch in the address.

White interior features: White is a good colour for the insides of cars as it gives them a real prestige feel. The downside is that marks show up instantly; spill a splash of coffee as you insert a cup into the holder on the glossy white floor console and it stands out like a dog’s proverbials - as does the fine layer of fuzz kicked up from the black floor carpets. 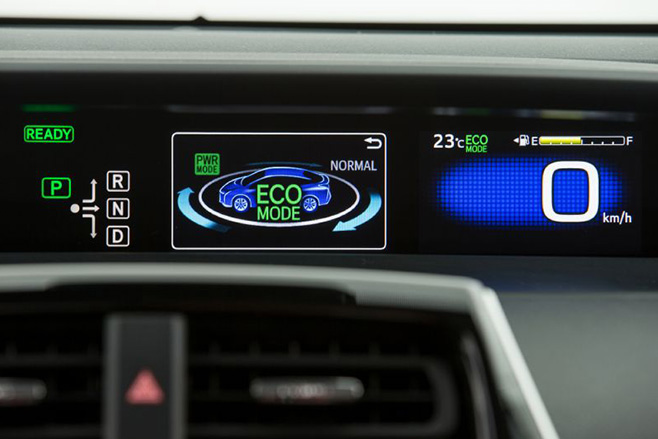 Cheap battery: Toyota had two options for the Prius when it was bringing it here: user a lighter, slightly more expensive battery that improves fuel economy even more, or a cheaper but heavier one that doesn’t. Because we don’t seem to care too much about emissions, we’ve gone down the cheap road.

It beeps a lot: The Prius likes to let the driver know when things aren’t right. It will sound a warning the whole time you’re in reverse gear, when you stray near a white line with the lane departure warning switched on, when you step out to open a gate, and so on.

It’s a bit complicated to turn the car off: Shutting down the Prius is a tricky affair if you’ve never done it before. You need to jump on the brake pedal, push a “P” button and then stomp on the foot-operated parking brake. It shouldn’t be that difficult.

The Prius’s enemy within is the recently introduced Toyota Corolla Hybrid. At $26,990 the Corolla-based fuel sipper is much cheaper, uses slightly more fuel and produces a bit more carbon dioxide, but not by much. Go cheaper again and the slightly smaller Prius C, at $25,990 for the more up-spec i-Tech version, still leaves a lot of change in your pocket.

If you want a more premium badge, the Lexus CT200h is based on the Corolla hatch and priced from $37,990 for the entry-level Luxury. It isn’t quite as green as the hybrid Corolla, but trumps it for equipment.

No other mainstream carmaker offers a hybrid model at this end of the market. Honda used to, but the Civic Hybrid is now just a memory. If you’re prepared to wait, Hyundai is working on bringing the Prius-sized Ioniq here late this year. It is likely to arrive here as a hybrid, but may also offer plug-in hybrid and all-electric options – if we’re prepared to pay extra for them.