Flap over doors was as short-lived as its COTY charge

IF THEATRICS were part of the COTY criteria the Tesla Model X could have scooped the gong on day one.

Its polarising Falcon Wing doors rise like a bird majestically preparing for take-off. Hidden within those innovative rear apertures are two sets of hinges and six sensors designed to stop them from banging into things, but at least one judge’s noggin provides empirical evidence that the system hasn’t quite been perfected.

Then you press the accelerator, launching Tesla’s 2.5-tonne electric family car towards the horizon as if scooped up by the hand of God. 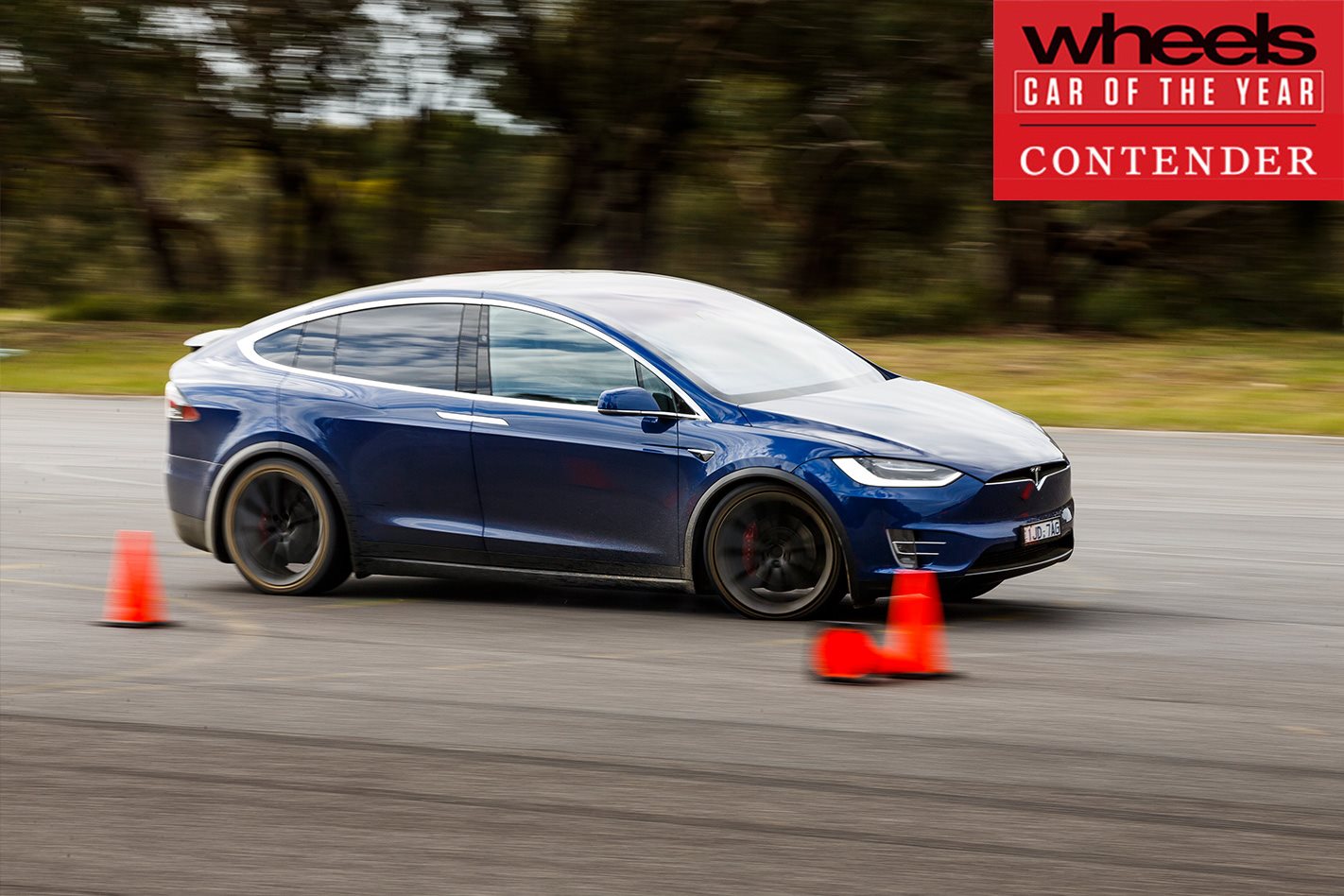 The 100D is quick, but the Tesla Model X P100D is ballistic, able to blast to 100km/h in 3.1 seconds. That it achieves this without any hint of wheelspin is an incredible achievement.

It’s the sort of car that makes you smile simply because it (and its stablemate) are so startlingly different to anything else out there. For now, at least.

That the fun peters out beyond 100km/h was less of an issue for the judges. After all, few cars will trounce the traffic-light grand prix like a Model X. Similarly, its propensity to smoke its Brembo stoppers was no deal-breaker considering the pace and mass they’re tasked with containing.

But once the excitement of getting in and shooting for the moon wore off, judges reverted to the COTY criteria, at which point some of the all-electric gloss begins to fade. It starts with the $140K-plus price tag for the 75D, something that can almost double for an optioned P100D. 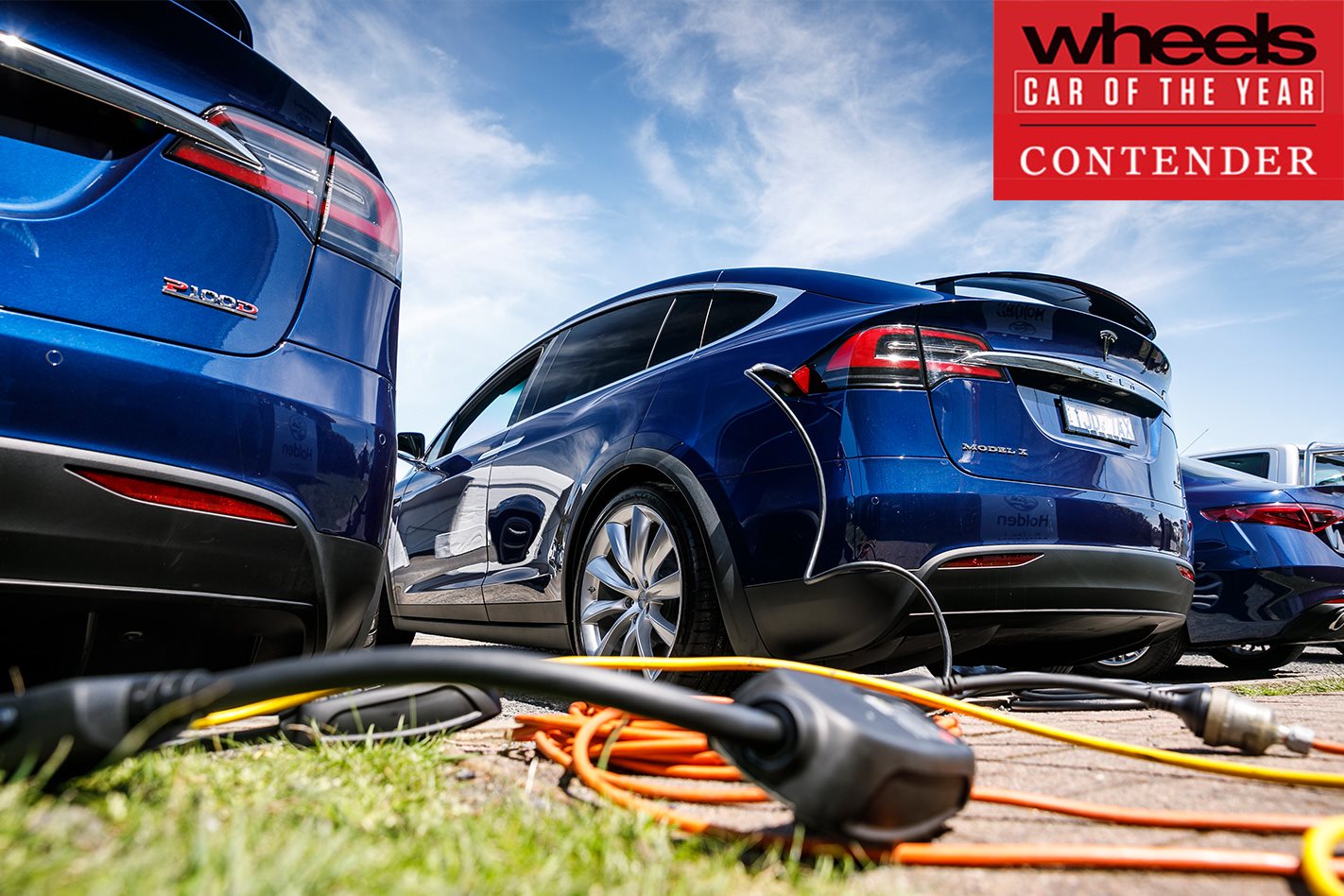 For that you expect perfection. Instead, the X attempts seduction of a unique, futuristic flavour courtesy of its 17-inch touchscreen and clean, spartan cabin laced with Mercedes switchgear. The occasional rattle, though, is inexcusable.

Blame that partly on the lack of engine noise to mask it, but mostly on the terse ride. While the heavy, low-slung battery pack makes for beautifully flat cornering – it even surprised on the dirt – the stiff suspension also plays its part to impact on everyday comfort. Combined with 22-inch low-profile rubber (inflated to 50psi, as per the placard) there’s an unwelcome bump-thump accompaniment over typical Aussie blacktop.

Those doors also contributed to the Model X’s COTY undoing, with judges less enamoured with the five-odd seconds it takes for each to open or close. Or the fact the cabin is more exposed to the elements than it would be with conventional doors. They may impress the cafe set but they also detract from the car’s functionality, especially in tight parking situations. Or monsoonal rain. 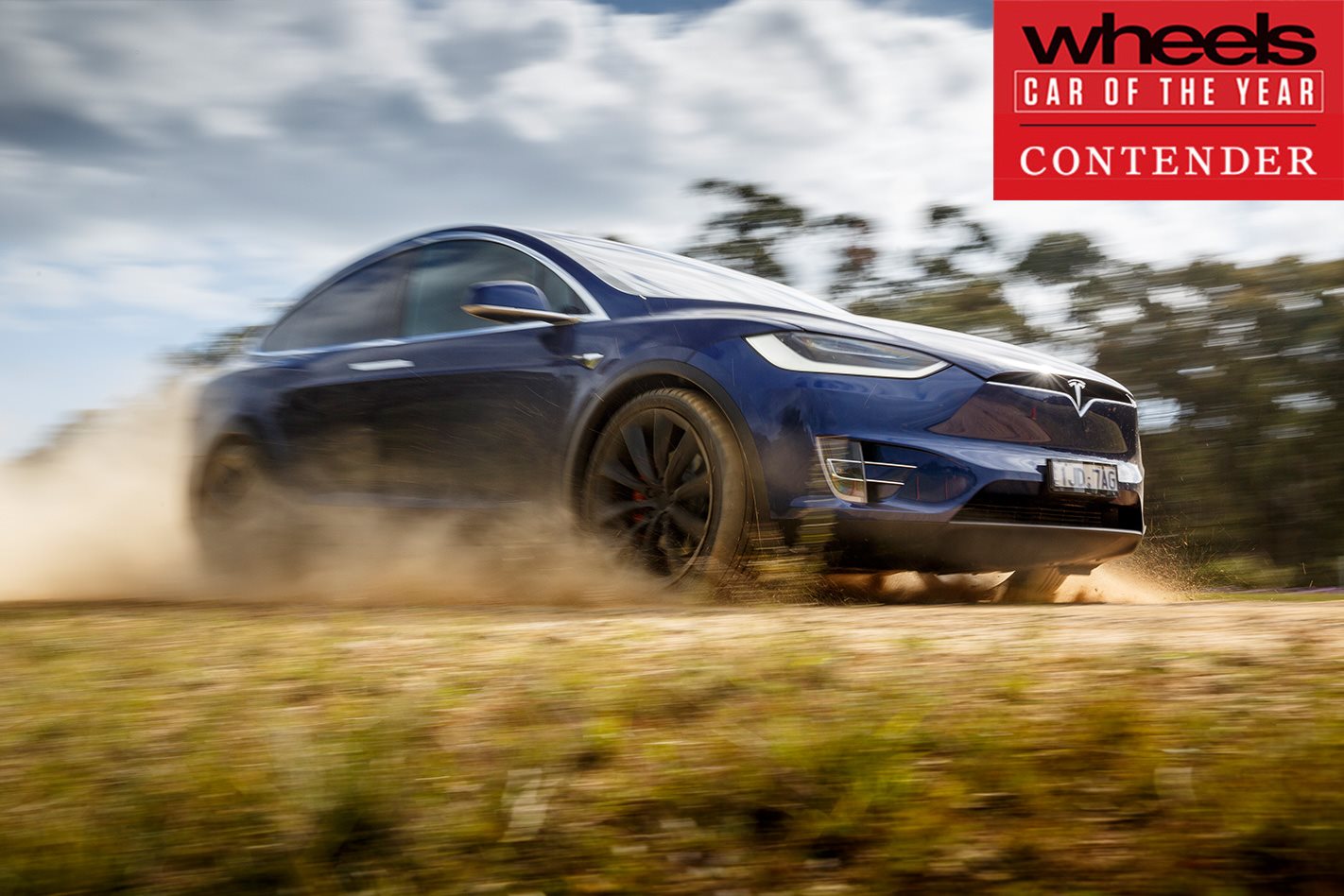 Discussions around the longevity of the technology may be moot for now – Teslas are covered by a four-year warranty – but the feeling was that aspect will play a part some time during the car’s life.

Ultimately, though, it came down to what the Model X brings to the electric sales pitch that the Model S doesn’t already do brilliantly. The two share underpinnings and electron-infused philosophies.

Yet the hatchbacked S is lighter, slicker and more affordable, if lacking some of the X’s spacious practicality. 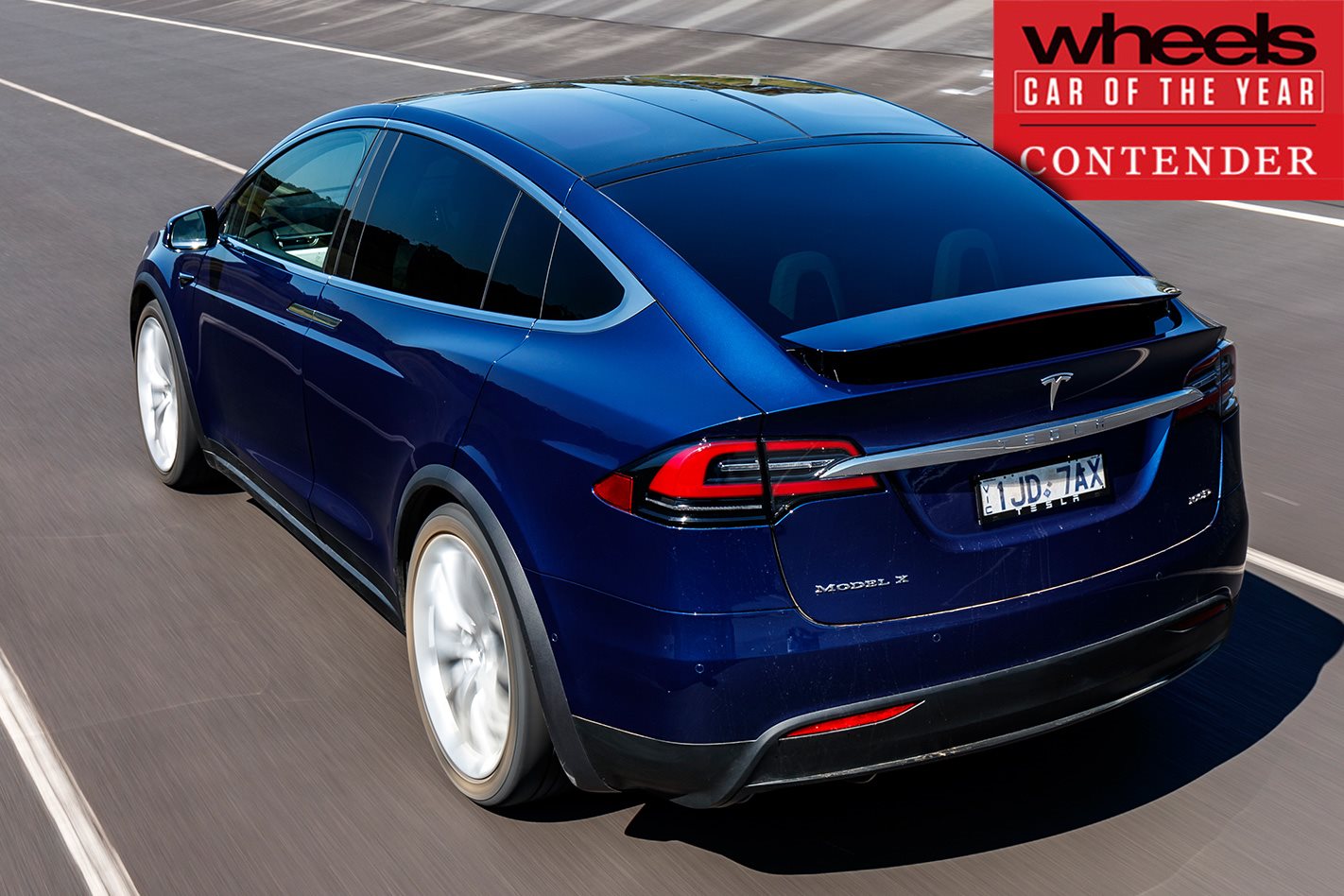 All of which was enough to see the Model X strike out in round one.

One area of packaging the Model X nails is seating flexibility. It can be ordered as a five-seater (meaning extra cargo space), as a six seater, with two outboard second-row buckets allowing walk-through access to the pair of third-row seats, or as a seven seater.

When configured as the latter, the second and third rows can be folded flat, so there’s always the availability of a vast cargo area. 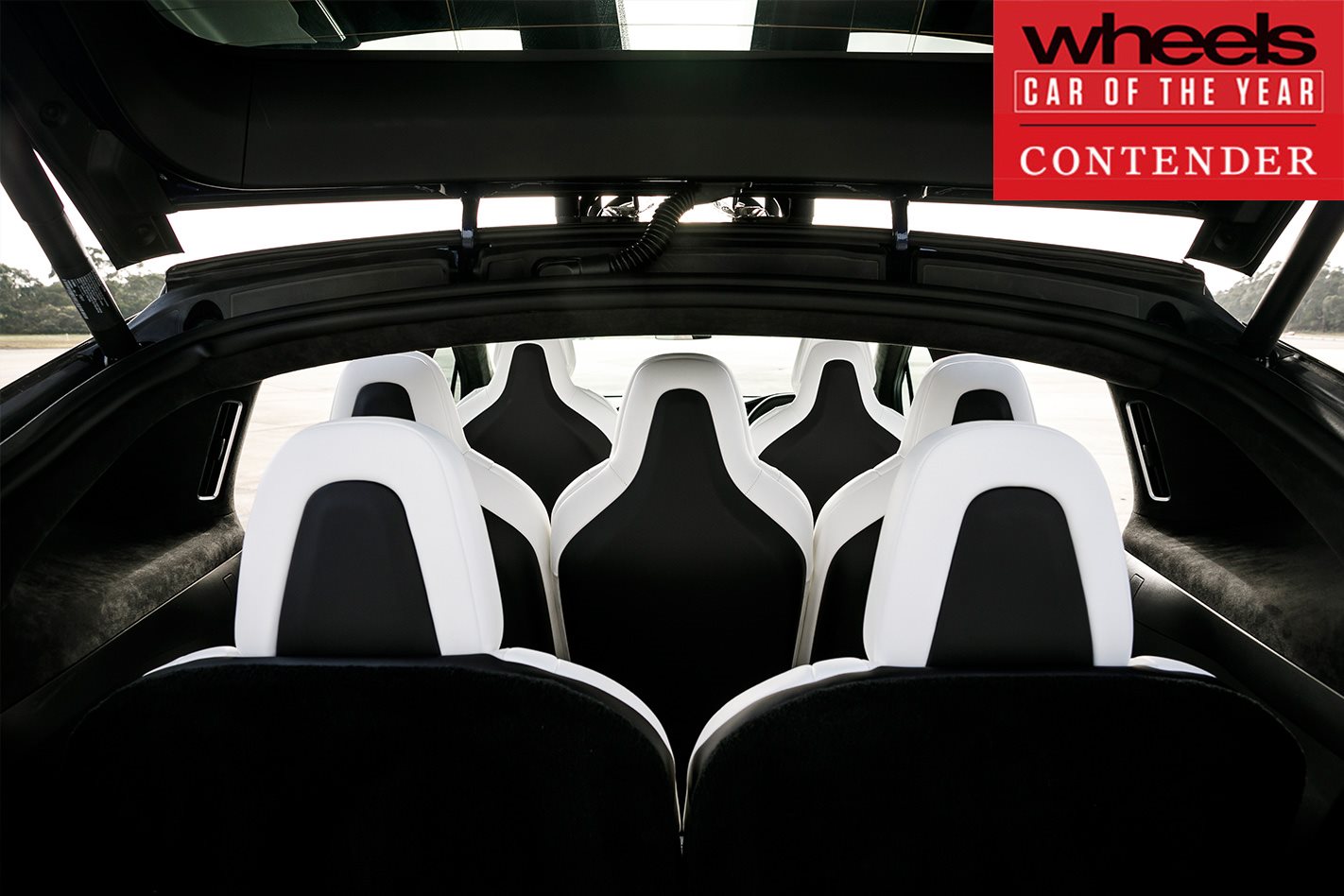 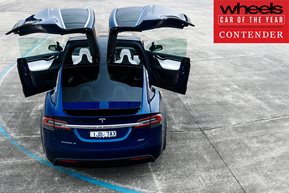