WITH the exception of a long bout with terminal illness, it’s unlikely that you’ll know how you’re going to meet your maker.

Just as it was impossible for me to predict the four-metre-wide combine harvester that decided to play chicken with my bright red Alfa Romeo Stelvio on a cramped rural road in Northern Ireland. This country, for so long the United Kingdom’s problem child, is full of surprises. 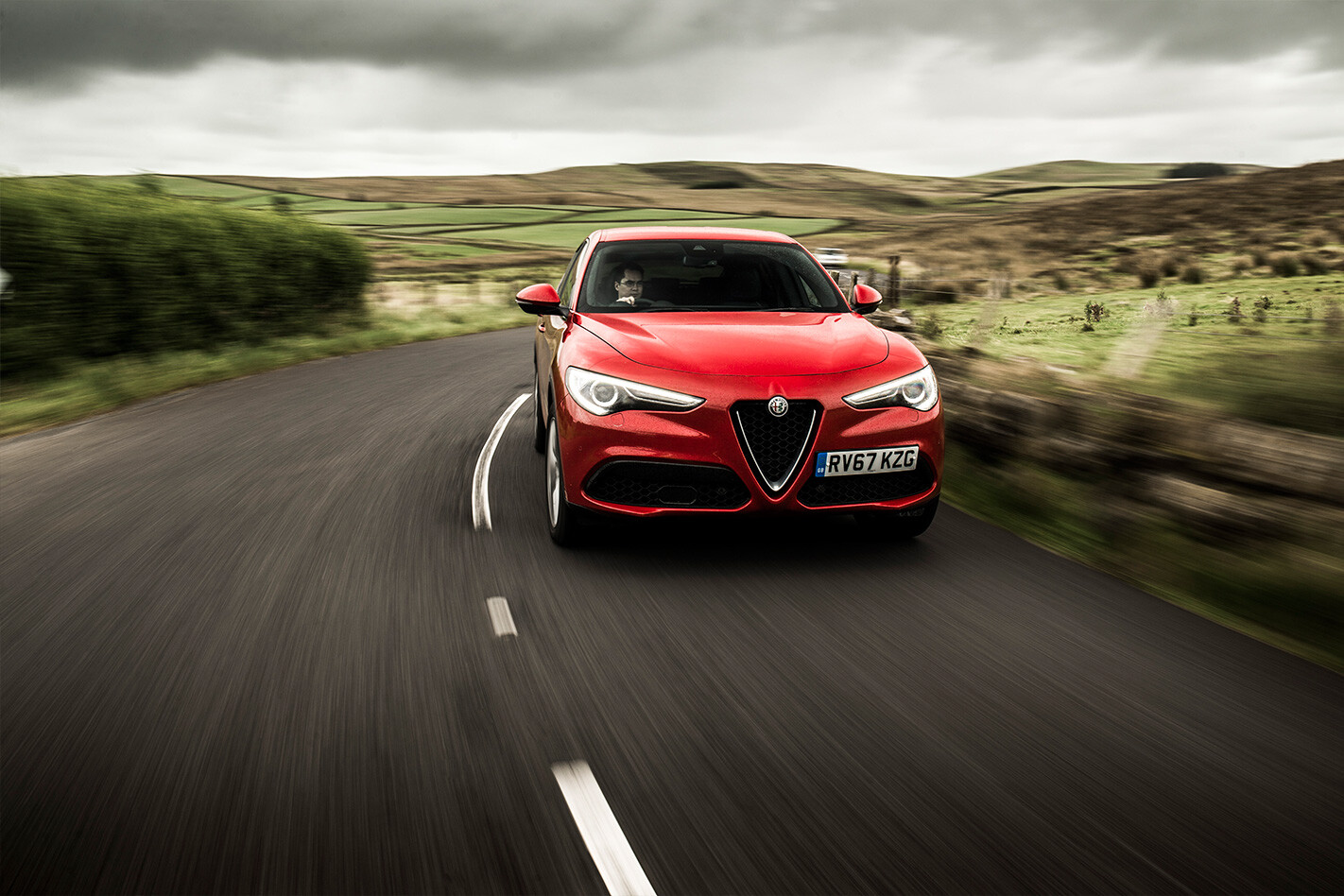 By some miracle, the wild-eyed Irish agriculturalist and his harvester missed corrugating the driver’s side sheetmetal of my Alfa by a handful of millimetres. It may have been less. I had my eyes closed. Luck of the Irish? Maybe. Or maybe it had something to do with the Stelvio’s ability to shrink around the driver – metaphorically speaking.

Now, when you think of go-to driving destinations in the United Kingdom, one place comes to mind – Wales. The rugged windswept landscape of the Welsh countryside is seemingly the default backdrop of hundreds of Limey car reviews on YouTube, and for good reason – the curves are mega, and the enforcement of speed seemingly non-existent.

But Northern Ireland offers an alternative that’s packed with just as much driving joy – not something we were expecting. Another thing we weren’t anticipating: just how similar Northern Irish roads feel to those Down Under. Ignore the road signs and you’d swear you were rocketing along a Victorian or NSW country backroad … except that someone’s messed with the saturation settings and the scenery has turned an unfeasibly lurid green.
It’s not a bad place to test a car. But nobody warned me about the farmers. Collecting the Alfa Romeo Stelvio – a high-spec model roughly equivalent to the Giulia Veloce for features and power – outside our Belfast hotel, the doorman gushes over the Alfa’s design. “I’ve never seen one of these before,” he says with a thick Irish brogue. “It’s absolutely gorgeous.”

High praise from a bloke who just parked a Rolls-Royce Phantom, and a comment that’d no doubt puff up the chests of the designers at Alfa’s Centro Stile.
Built in Italy and named for that country’s most famous mountain pass, the Stelvio feels impossibly romantic among the drab diesel hatchbacks and sedans that populate Northern Irish roads.

Especially in Belfast. This place was the epicentre of Northern Ireland’s decades-long struggle with domestic terrorism, and is the starting point of our journey. The Alfa’s bright red paint and glamorous Italian styling are at odds with the grey stucco houses, end-to-end nimbostratus and the industrial bleakness of Northern Ireland’s capital. But Belfast is doing its best to change. The violence ceased 20 years ago, the more provocative murals belonging to ‘paramilitary’ organisations have been painted over, new industries like aerospace have superseded shipbuilding and the inner city fills with young partygoers on Saturday nights. Alfa Romeo is also in a state of transition and transformation, and that’s manifest in the Stelvio. Alfa’s never done an SUV before, though its first effort at a stilt-wearing wagon is anything but a tentative toe in the water.

Keys in hand, we don’t hang around in Belfast. More enticing roads beckon, and I point the Stelvio towards Ireland’s north-east coast. There, between Carrickfergus and Ballycastle specifically, we hope to find delectable ribbons of tarmac sandwiched between green hills, abrupt cliffs and the North Channel. And we do, but here at the same latitude as northern Newfoundland there’s no shortage of weather … and slow-moving tourists.

The Stelvio deals admirably with the former. All Stelvios destined for Australia will utilise Alfa Romeo’s Q4 all-wheel-drive underpinnings which may sound a bit too safe ’n’ secure, but it gives preference to the rear axle when figuring out where to send torque and most of the time it feels rear-driven. The front differential is there as a safety net, but even on a soggy and cold Irish morning it was difficult to provoke a loss of traction. Lollygagging American tourists in rented Dacias are harder to deal with. Passing opportunities are few on the crazily cambered two-lane roads that ring this section of Irish coastline, and while the Stelvio’s 206kW/400Nm 2.0-litre turbo-petrol has ample punch – and is backed up by one of the better installations of ZF’s ubiquitous eight-speed auto – negotiating slowpoke Yanks bamboozled by driving on the left-hand side is a challenge.

We’re losing time and worsening weather coming from the Atlantic is destroying snapper Thompson’s photo ops, so we hang a left at Glenarm and turn inland, literally towards greener pastures.

Away from the coast, the roads open up and the scenery morphs from black cliffs to rolling hills. With more opportunities to squeeze its alloy-faced accelerator, the Stelvio shows its mettle. It’s more sports car than sports utility vehicle. Much of its DNA is shared with the Giulia, so it’s already got an athlete’s skeleton underneath. Then again, the Mercedes GLC is built on the C-Class’ capable platform too, so it’s not like the Stelvio is entirely unique in that regard. The real difference comes from how it’s tuned.

While a GLC feels benign and most at home projecting a preening brand equity at any opportunity, the Stelvio practically begs to be whipped hard. Its super-fast 12:1 rack ratio is well-suited to dispatch Ireland’s flowing country roads, and its pointy and grippy front end gives the confidence necessary to punt it hard without fear of flinging it into a hedge.

There are enough aural theatrics to enhance the mechanical experience too. The turbo four pot has a pleasing growl, the long metal shift paddles make a satisfying ‘click’ with every pull and the transmission dials up flamboyant rev matches on downshifts, and a pronounced ignition cut on upshifts. 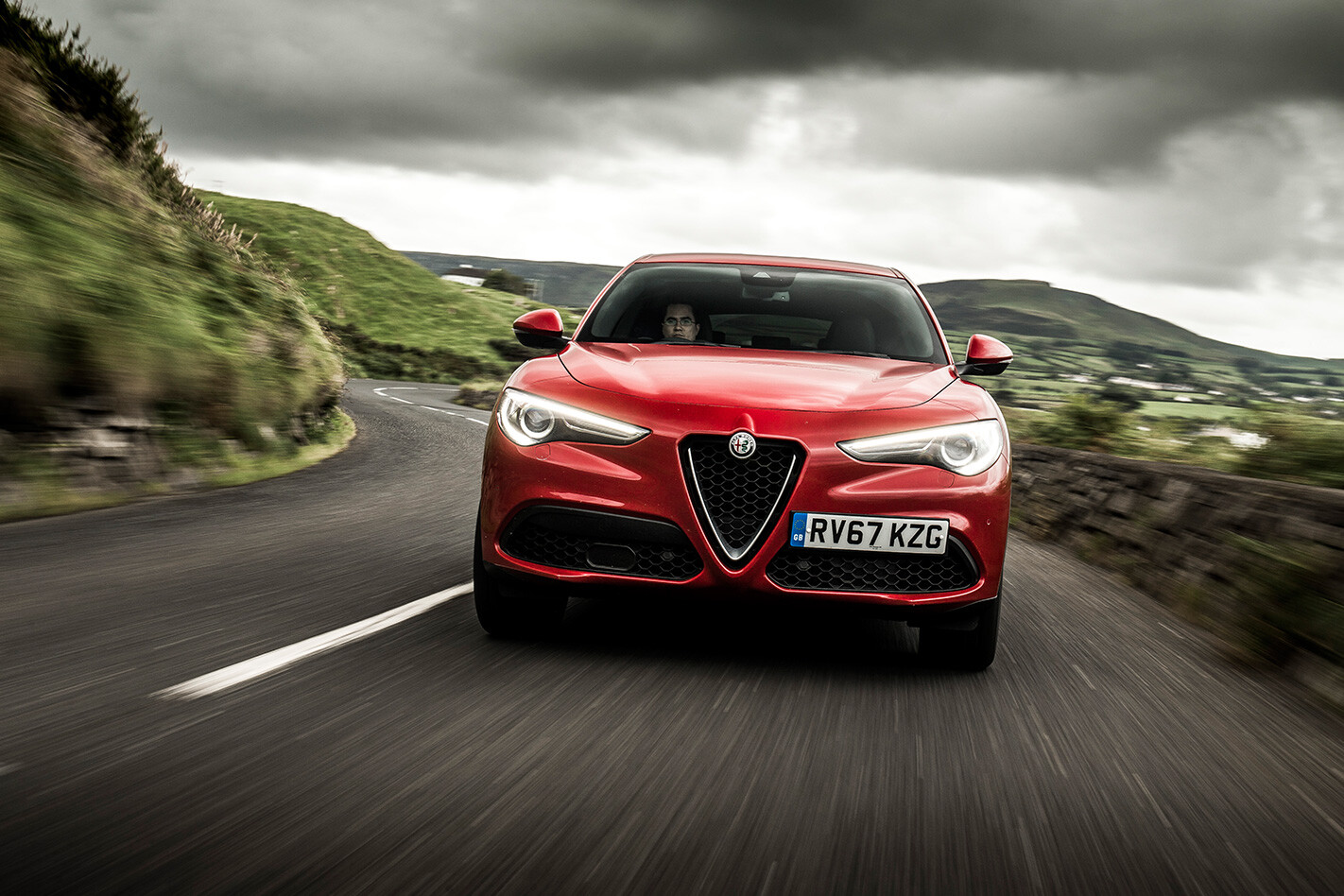 That should soothe the heads of concerned Alfisti. For a company with such a rich history of manufacturing high-performance coupes and sedans, the news that Alfa Romeo was going down the profit-chasing path of launching its first SUV must have been cause for many a spilled macchiato in Alfa fan clubs.

But like Porsche, Alfa Romeo has turned out a sports utility that augments rather than exploits its heritage.

The long curves between Glenarm and the inland town of Ballymena provide plenty of opportunity to appreciate that capability, and away from the tourist routes the traffic changes markedly. There are bugger-all vehicles on roads like this, and when you do come across another motorist, it’s more likely to be a local who knows the roads and drives like a demon – regardless of whether they’re in an MX-5 or a Transit. 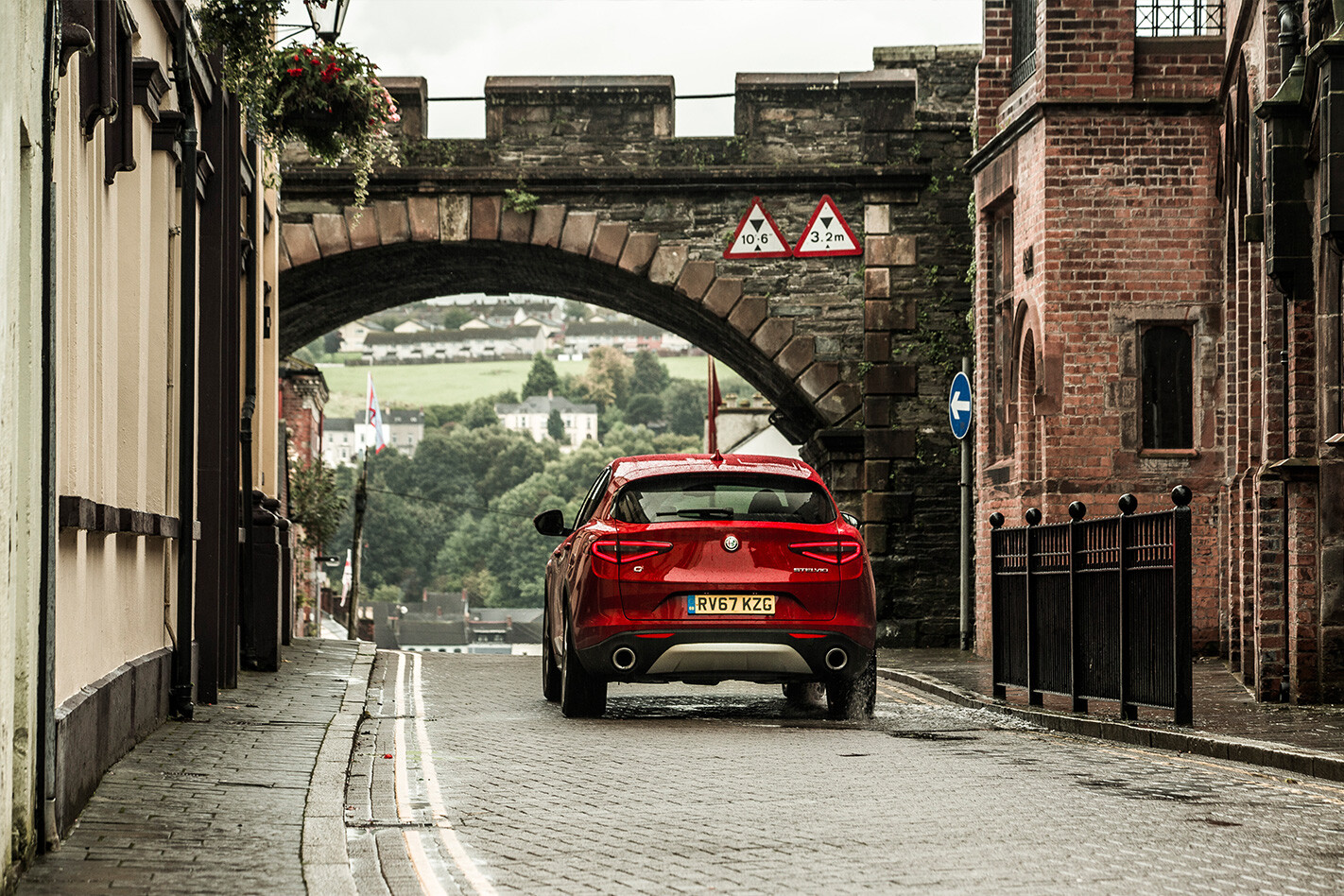 Clearing Ballymena, we pick up the main highway and push west toward Derry – or Londonderry, depending on your attitude toward the United Kingdom – and cross the River Foyle.

While Belfast is trying to paint over the pricklier parts of its modern history, the evidence of Northern Ireland’s Troubles are harder to erase in Derry, its
second city, which sits nestled up to the border with the Republic of Ireland.

An otherwise charming medieval walled city, Derry still bears the marks from decades of sectarian fighting between Catholic republicans and Protestant loyalists that began in the late 1960s and only ended in 1998 (see sidebar, p101). Rolling through Derry’s notorious Bogside, the many murals tell a story of Catholic oppression under British rule – while the nearby IRA Prisoners Welfare Association bears an intimidating mural of its own showing two balaclava-wearing blokes, one toting a military rifle, the other an RPG, with the sinister message ‘UNFINISHED REVOLUTION’ above them both. 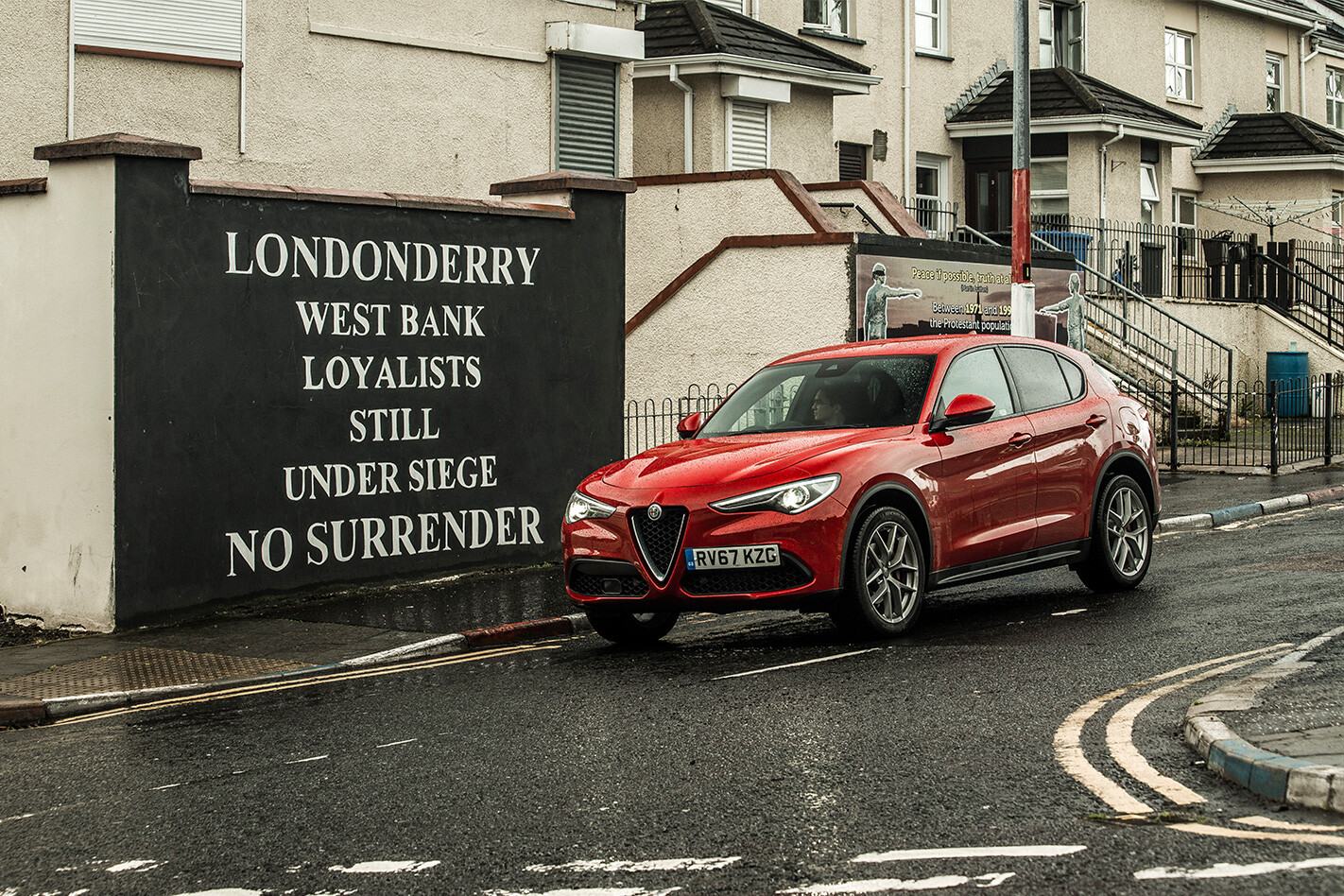 Roughly 200 metres away, a loyalist mural promises the Protestants of Londonderry’s West Bank will give ‘No Surrender’. Ever.

Grim, yet while it’s tempting to hang around and absorb the grittier aspects of Northern Ireland’s constitutional heritage, we need to press on. I’m told there’s a national park west of Derry that’s a spectacular example of Irish geography, and I’ve been itching to take the Stelvio somewhere that will put dirt or gravel under its all-terrain tyres. Y’know, because it’s an SUV apparently, and it’s supposed to be good at that kind of stuff.

We cross the border into the Republic and the roads change; coarser chip and lumpier. The roads here tend to follow the terrain more closely than they do in the UK’s patch of Ireland – either that, or the terrain is simply wilder to begin with. Scratch that. The terrain is definitely wilder. Travelling west through Letterkenny (winner of Ireland’s Tidiest Town award, 2015), the countryside opens up, the trees disappear and long hills, scraped out of the earth’s crust by ice-age glaciers, appear.

Covered by grey rock and yellow grass, and with very little in the way of human habitation, it’s like a different planet compared to the green, leafy and populated countryside we’ve travelled through to get here. Beautiful, rugged, yet slightly foreboding, it’s little wonder that Ireland has inspired the settings of many works of fantasy, from The Chronicles of Narnia through to Game Of Thrones.

And it’s here, at long last, that we find the opportunity to say goodbye to tarmac. Unless you’re trespassing on someone’s farm (perhaps to sabotage their combine harvester in retribution), it seems unpaved roads are a rare thing in this part of the Emerald Isle. Yet even now, on the closest thing to an off-road trail that we’ve found, even dirt itself is scarce. Rather, fine pebbles keep the trail – which twists between vast fields of peat bog – from turning into soggy mush under vehicle traffic. Thankfully the Stelvio treads lightly. Besides the ever-present moisture that seeps from the spongy peat, there’s nothing especially challenging. No mud, no rocky ascents to conquer. I thought I felt the front diff engage at one point, but I could have been mistaken.

No matter. This country – whether you’re talking about the Republic or that chunk of the UK in the north east – is breathtaking in its natural beauty, and that’s not something I expected to discover. It makes it easy to forget the politics.

The Stelvio, meanwhile, makes it easy to explore a country like this. I can think of few cars that blend driver satisfaction, load-lugging capability and all-weather, all-surface grip so well. The fact it’s genuinely gorgeous, in the words of our helpful Belfast doorman, is icing on the cake.

And just like that kamikaze combine harvester, I didn’t really see that coming.