Based on the Giorgio architecture that underpins the Giulia mid-sized sedan, the Stelvio is lining up for a Q1 2018 arrival into the Australian market, with three variants - base, Veloce and, later on, performance-oriented Quadrifoglio. Because it has to be good. Jacking up an existing sedan and adding a tailgate isn’t enough to guarantee success and, as Alfa is already well over a decade late to the premium SUV party its first effort at one needs to be outstanding to make up for lost time.

According to Alfa Romeo, the Stelvio bridges the gap between conventional mid-size SUV wagons and their ‘coupe-style’ derivatives, meaning it lines up against not only the BMW X3 and Mercedes-Benz GLC, but the BMW X4 and GLC Coupe as well. Audi’s Q5, Jaguar’s F-Pace and the Range Rover Sport are also key rivals, and are formidable foes for Alfa’s first-ever SUV. DESPITE demonstrating it was capable of progressive thinking back in 2003 when it unveiled the Kamal SUV concept, Alfa spent the next 13 years sitting on its hands. But now the iconic Italian brand’s first SUV, the Alfa Romeo Stelvio, is finally almost with us, with an Australian launch set for late Q1 next year. Expectations are understandably high.

And so they should be. The arrival of the Cayenne revitalised a struggling Porsche in the early 2000s, while Jaguar – another marque renowned for swift passenger cars with no prior SUV history – has been kicking goals with the F-Pace crossover that landed in Australia last year and quickly became its top-seller. Alfa Romeo is clearly hoping the Stelvio will be the catalyst that allows it to claw back market share, and replicate the success enjoyed by European rivals. 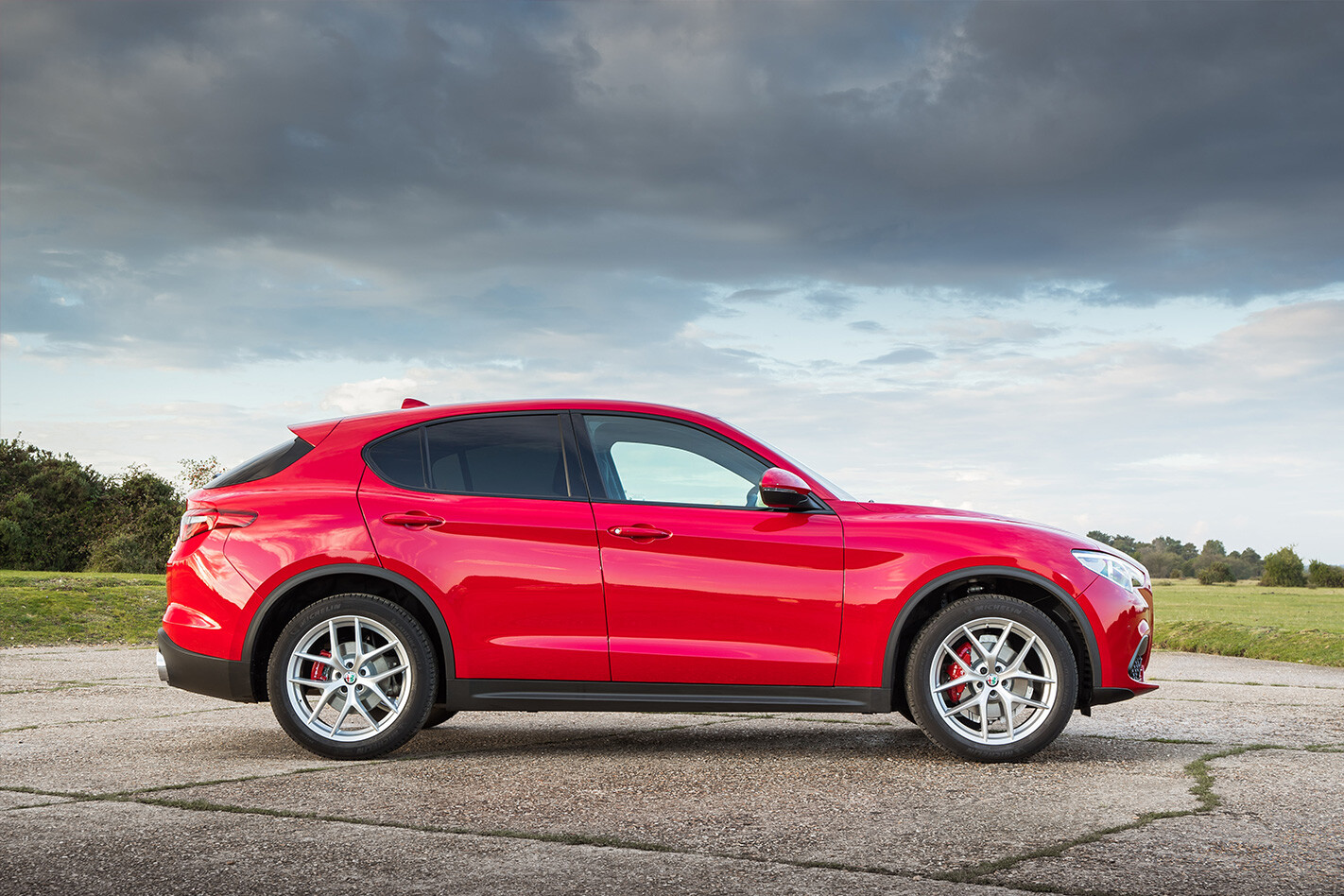 It gets off to a good start. Based on the Giorgio platform that underpins the Giulia – a Wheels favourite that’s already acquitted itself well in multiple comparos – the Stelvio’s longitudinally-engined architecture has been engineered to keep weight low and dynamic ability high.

And of the mid-size SUV crowd it certainly feels like it has an athletic edge. Weighing just 1660kg in its heaviest configuration and boasting a 50:50 weight distribution, the Stelvio feels light on its feet – a lightness that’s promoted by its fast-reacting 12:1 steering rack ratio, agile front end and good suppression of bodyroll. 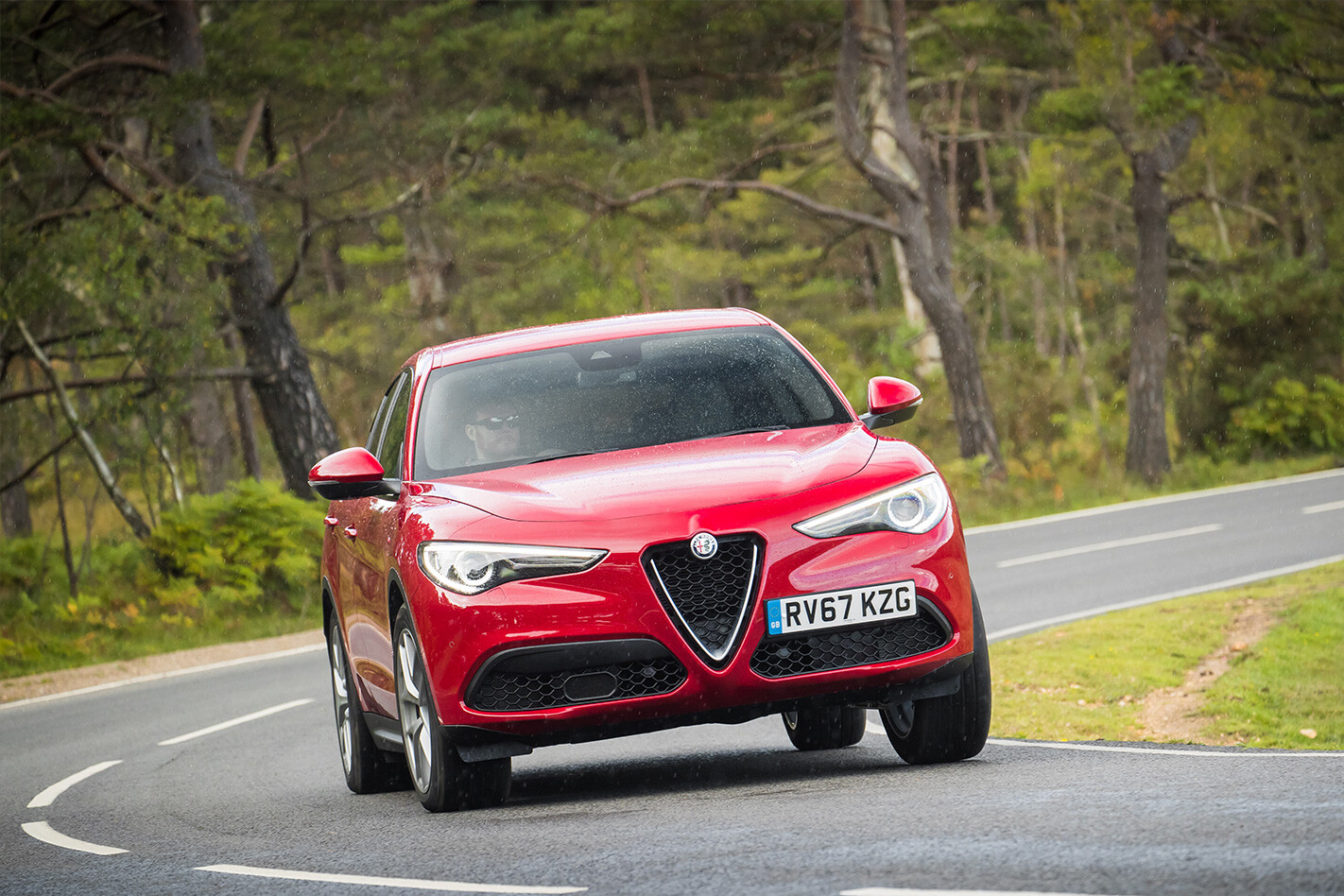 A firm ride over small-amplitude, high-frequency bumps gives way to a more supple experience when travelling over longer undulations, with the Stelvio making the most of its long-travel suspension and displaying excellent rebound control from bigger hits. Our car was shod with 20-inch wheels, which may explain some of that low-speed fussiness. Opting for smaller wheels may dial that out, albeit to the detriment of aesthetic appeal.

At eight-tenths driving the Stelvio is superb. The steering is not only quick at just 2.1 turns lock-to-lock, it’s connected to front tyres that bite the surface and refuse to relinquish their grip until speeds get properly inappropriate. Pushed harder at high speed on truly diabolical Irish launch roads – some of which bear a resemblance to Australia’s poorer country backroads – the Stelvio’s rear suspension begins to lose its composure, frequently finding its bumpstops and bouncing out of sync with the otherwise stable front end. Adaptive dampers will be standard for the high-performance Stelvio QV in Australia but not on others.

Pedal feel from the brake-by-wire setup is also at odds with the taut chassis and alert steering, with initial dead travel followed by an abrupt engagement that’s difficult to modulate. 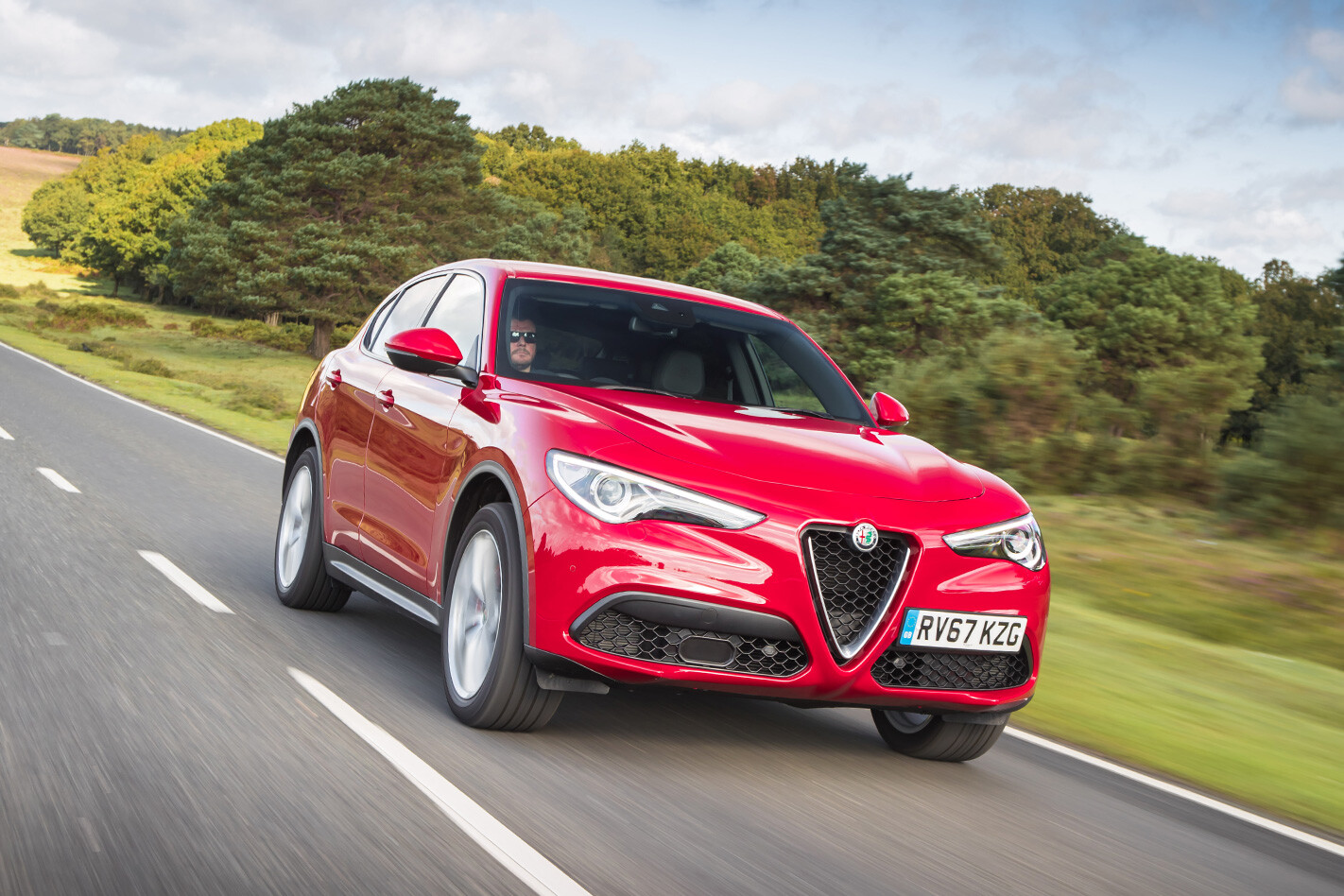 So while the chassis turns in a mixed report card, the powertrain and drivetrain score straight-As. The 206kW/400Nm 2.0-litre turbo-petrol four we drove may not be 100 percent locked in for Australia as we went to print, but it neatly plugs the gap between the low-output 149kW/330Nm 2.0 turbo-petrol and the harder-hitting twin-turbo V6 Quadrifoglio flagship that’ll arrive in late 2018. If it doesn’t end up coming our way, it damn well should.

With an incredibly strong midrange and a tacho needle that happily rotates right to 6500rpm, this four-pot has the muscular feel of a larger V6 – especially when the drive mode selector is twisted to ‘D’ for ‘Dynamic’. It sounds pretty rorty in the upper reaches of its rev range, too. 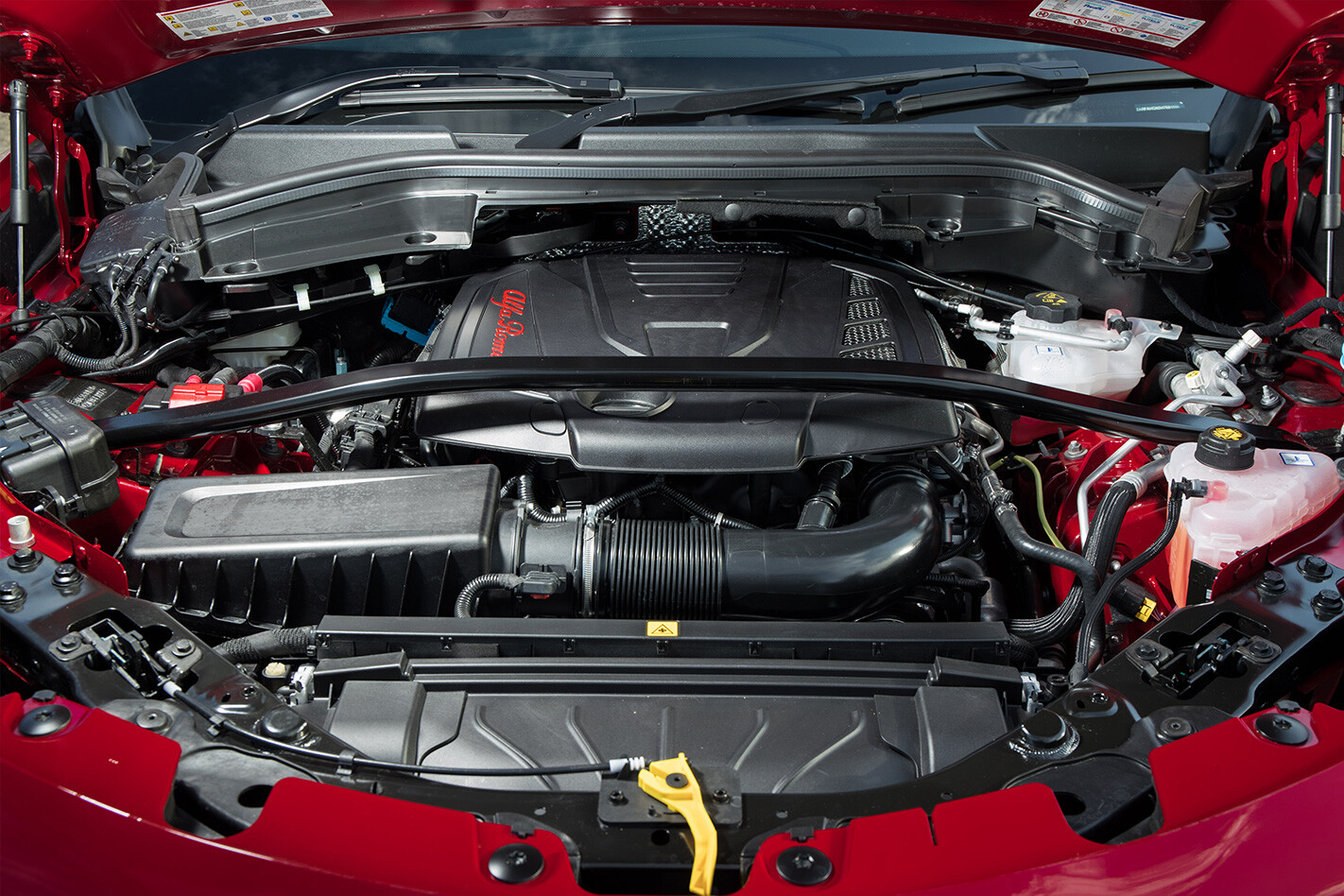 There’s a 156kW/450Nm 2.2-litre turbo-diesel in the lineup, but its gravelly note at idle and sedate power delivery don’t mesh as well with the Stelvio’s sporty nature. Unfortunately the 149kW petrol base model wasn’t available to drive – we won’t be able to vouch for that one until the Stelvio lands in Oz.

Regardless of which powertrain you choose, all Australian Stelvios will run a superb eight-speed automatic and all-wheel drive, and the traction provided on soggy Irish roads at its launch was difficult to breach. In Dynamic mode, manual upshifts are executed with a racey ignition cut that imparts an even sharper feel to what is already a very crisp-feeling transmission. 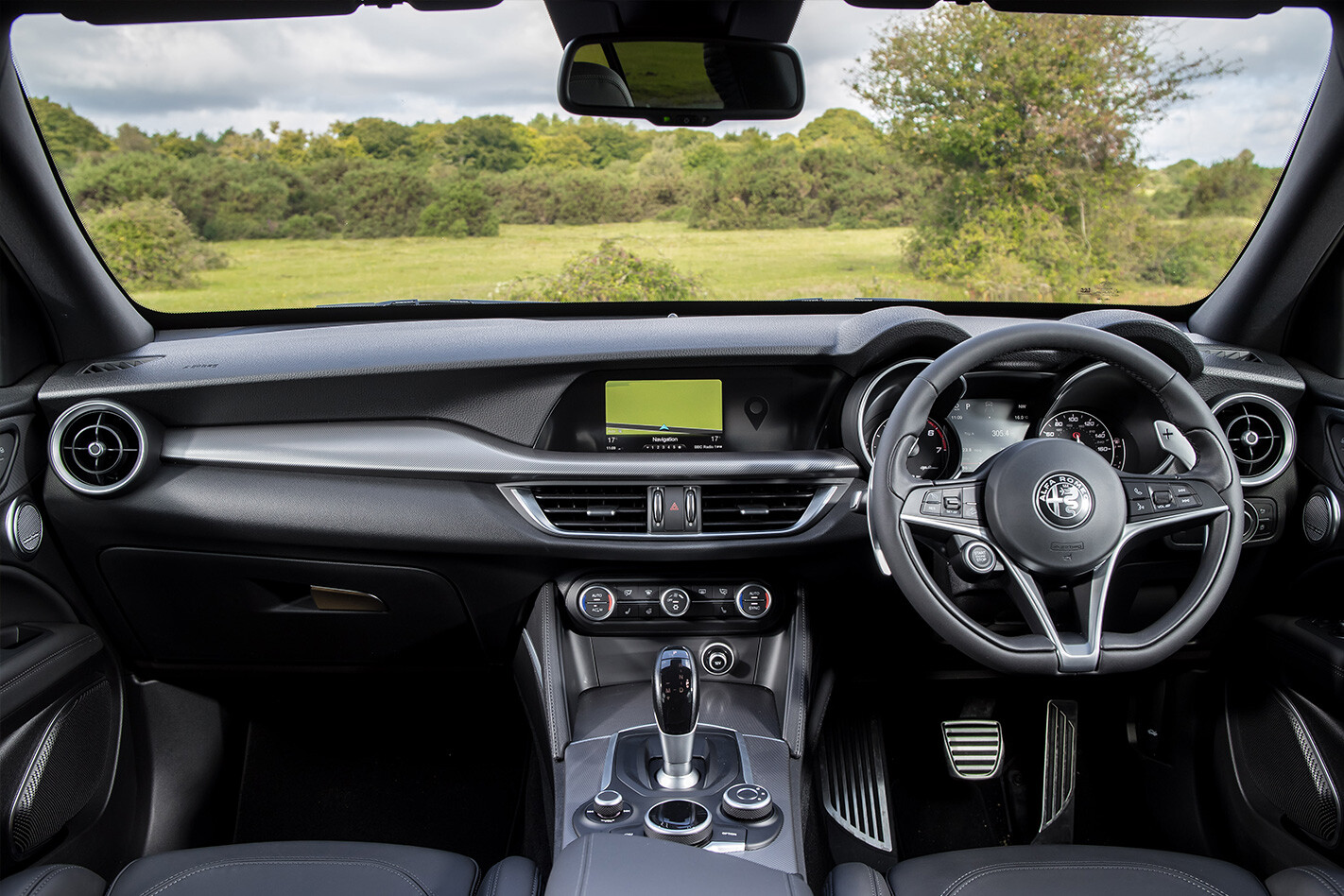 The interior isn’t quite as convincing. It certainly looks the part with a sleek Italian elegance that doesn’t stray too far from the Giulia’s cabin treatment, but coarse-textured lower dash and console plastics detract from its appeal, while a rough-edged gearshifter is a sign that cabin quality could benefit from greater attention to detail. The infotainment system also lacks the intuitiveness and slick operation of BMW’s iDrive and Audi’s MMI.

Then again, those lovely metal shift paddles are a tactile delight and encourage the use of the eight-speeder’s manual mode, while rear-seat headroom is generous given the Stelvio’s D-pillarless glasshouse. 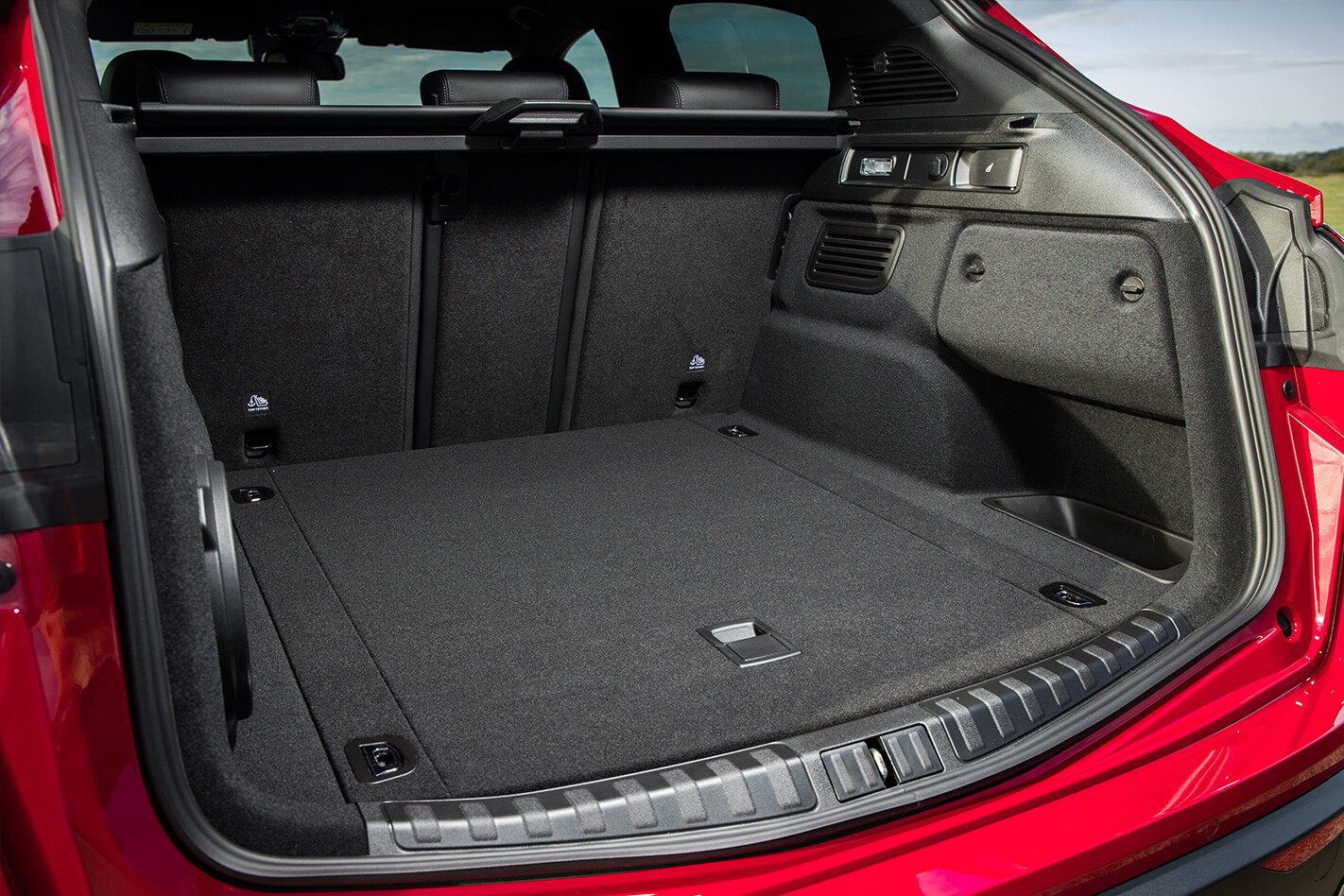 Rearward vision suffers due to the Stelvio’s shallow rear screen, while the decision to eschew a more pragmatic wagon bodystyle in favour of hatchback-like proportions limits seats-up cargo capacity to 525 litres. The trade-off is a silhouette that helps the Stelvio stand out from the rest of the luxo-SUV crowd.

And stand out it must.