WHAT IS IT?
The Quadrifoglio is the high-performance flagship of Alfa Romeo’s Giulia sedan range, designed and developed to battle BMW M, Mercedes AMG and Audi RS for enthusiasts’ hearts and wallets. The Quadrifoglio employs a Ferrari-inspired twin-turbocharged V6 engine, and takes the rear-drive Giulia platform’s already competent dynamics to new heights. But is it enough to vanquish some very serious German rivals?

WHY WE’RE DRIVING IT?
Because we want to find out if this is more than just another Alfa Romeo false dawn – remember the 156 GTA? Is Alfa Romeo finally a serious player at the highest echelon of the premium performance market? 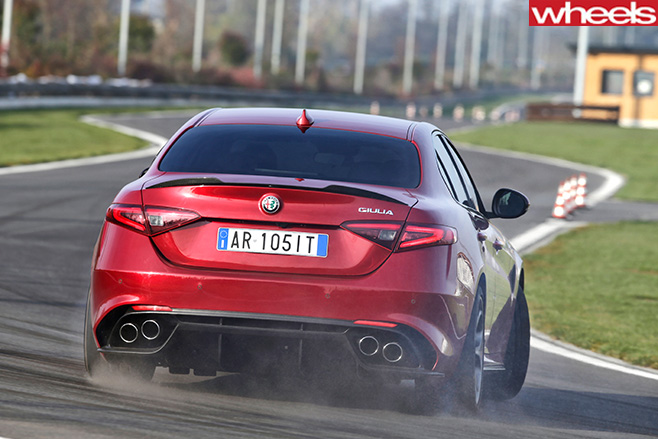 THE WHEELS VERDICT
Sorry, not going to tell you. The world has been waiting 33 years for an Alfa Romeo sports car worthy of the brand’s name and heritage, and I’m not going to blow the suspense before you’ve read the review. Trust me… It’ll be worth the wait.

THE WHEELS REVIEW
THIS is the most anticipated launch of 2016, no question. It may not be the most important in terms of market relevance or sales volumes, but as far as Alfa Romeo – one of the world’s oldest brands – is concerned, the company’s future depends on the Giulia’s success.

That’s not overstating it. If the Giulia prestige sedan is a flop, Alfa Romeo’s future is in question. The Giulia is essentially a €5 billion gamble, so it’s only fitting that it’s built in Cassino in the north of Italy. 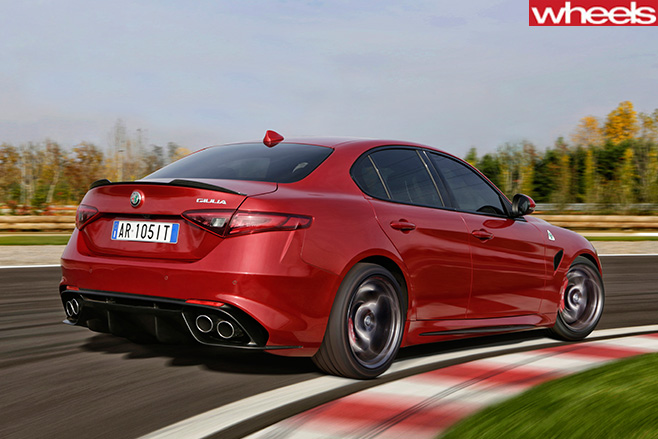 If you want to know why the Alfa Romeo Giulia is arriving four years after its predecessor, the 159, ceased production, read our review of the entry-level Alfa Romeo Giulia. But if you’re keen to read about the fastest Alfa Romeo ever built, then let’s get on with it.

That surprised me too, but it’s right. The Alfa Romeo Giulia Quadrifoglio (cloverleaf, and no Verde any more), is the fastest Alfa Romeo ever. Thanks to a Ferrari-inspired, 375kW 2.9-litre twin-turbo V6, this relatively lithe rear-drive sports sedan scorches to 100km/h in a claimed 3.9 seconds. That’s three-tenths faster than the previous record holder, the V8-powered 8C Competizione coupe. The Giulia’s claimed 307km/h top speed also shades that limited-run coupe, too.

What’s even better than all that is the fact the Giulia Quadrifoglio is an absolute hoot to drive. It’s an exciting, engaging and invigorating performance sedan that’ll give the 317kW BMW M3 and 375kW Mercedes-AMG C63 S a real challenge when we chuck them in the ring together, when the Giulia launches locally in February 2017. 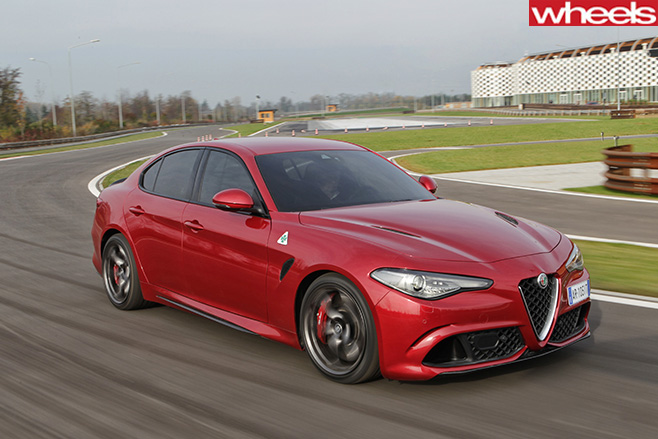 First thing you notice about the Giulia is its sexy, slightly sinister exterior styling. No mistaking this machine for anything but an Italian Alfa. The Quadrifoglio model steps the visual aggression up over lesser Giulias with a deep chin spoiler – complete with active aero lip that lowers for extra front-end downforce at higher speeds – ground-hugging side skirts, and a visually aggressive and very functional rear diffuser.

All of that, plus the Giulia’s long 2820mm wheelbase and the compact aluminium engine’s position low in the engine bay and almost behind the front axle line, combine to give this well-balanced car prodigious grip both front and rear. Seriously, the amount of traction the 1524kg Giulia’s aerodynamics and sticky 19-inch Pirelli P-Zero Corsas generate borders on astonishing. 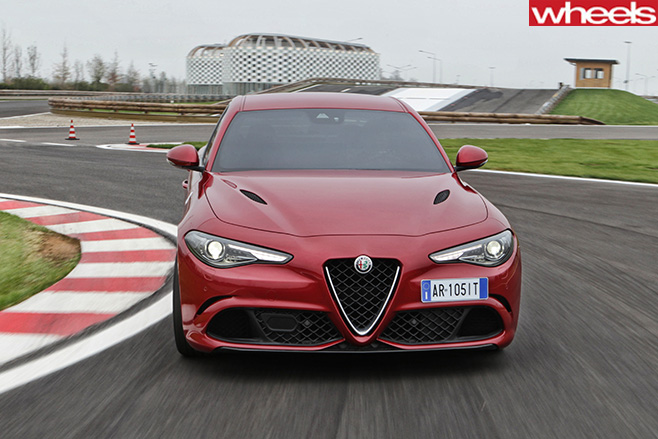 The Giulia’s initial attitude on turn-in – and it’s a hungry turn-in thanks to a very quick steering rack and responsive front end – is towards understeer, though there’s plenty of feedback keeping the driver well-informed. And it’s relatively easy to use the responsive, Ferrari-inspired 2.9-litre twin-turbocharged V6 to adjust the Giulia’s nose in corners, or overcome understeer completely with some highly entertaining and easily controllable tail-out oversteer.

Before we go further into the Giulia’s love of a good rear-end slide, let me explain why I called the Quadrifoglio’s 375kW TTV6 ‘Ferrari-inspired’. Some media are reporting that this 2.9-litre V6 is essentially the Ferrari 488’s 3.9-litre V8 with two cylinders lopped off. That’s not at all true, Giulia development boss Philippe Krief told Wheels at the international launch. And he should know; he joined Alfa Romeo from Ferrari, where he was a senior engineer. 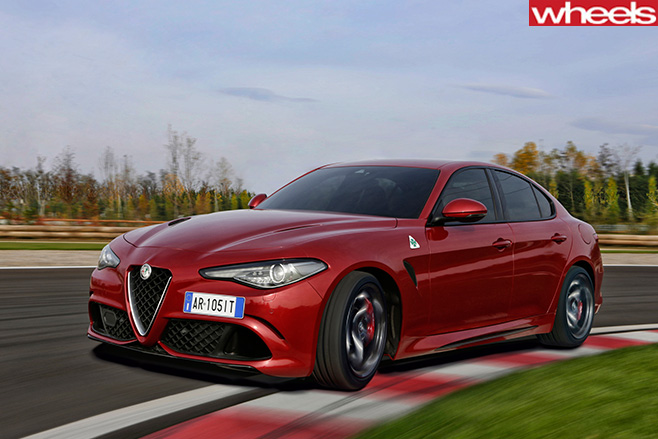 It’s easy to see why some journalists made the connection. Six-eighths of 3.9 is close enough to 2.9, and both engines utilise a flat-plane crank to keep weight down and engine responsiveness up. But we’ll take Mr Krief’s word as gospel.

One area where Mr Pivetti’s latest engine falls a little short is its soundtrack. Despite extensive effort by engineers to deliver an evocative engine note worthy of the car’s thundering performance, the result is a little tame.

“We wanted to make that engine sound like the old V6 engine, the 147 GTA and 156 GTA, so we targeted this kind of noise. We worked a lot on intake, to overcome the turbos, but we also compensated with exhaust. You can like it or not.”

It’s not that we don’t like it, we’d just like it louder, and more obnoxious. Listen to a well-driven AMG and you’ll hear all kinds of delicious gurgles and burps on overrun, and accompanying every gearchange… the Alfa does none of that. And perhaps it’s a testament to the cabin’s isolating abilities, but the engine note also sounds a bit distant and muted inside the very sporty and well-appointed cabin, despite having a bi-modal exhaust to supposedly offer the best of both worlds. 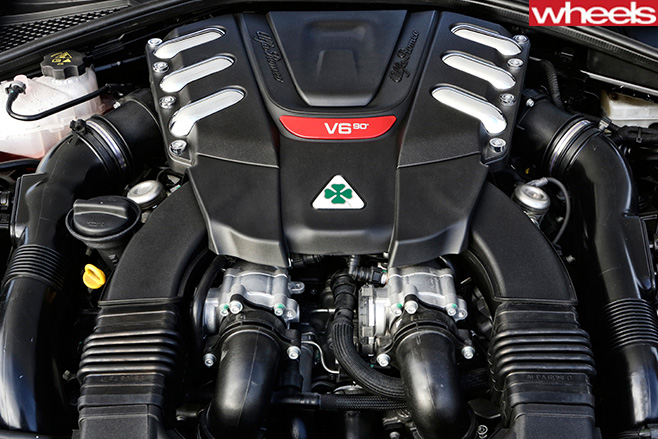 The engine itself inherits another trick from Ferrari, one the Prancing Horse’s first turbo engine in the California T debuted a few years back: increasing max torque as you go up the gears. But it’s not done for tractive reasons, Krief explains.

“It’s not better for car performance, but it’s better for driver feeling. This way the engine feels like it’s always building, giving you more, the more you push. You could have 600Nm from 2000rpm. The engine can do it. We choose not to, so we can heighten the emotional sensation.”

Emotion, it turns out, was one of Alfa Romeo’s key development targets with the Giulia, and especially with the Quadrifoglio. It all starts with a good driving position, says Krief.

“This is very important; the way you sit in the car. This is the first aspect. So we define this position, the space you need. The lower the better. Then after you have to organise everything. You need to have every component – steering, gearbox, brakes, engine – respond harmoniously, and progressively. And then you need also to make a car which is easy to drive. If you do performance which is not easy to drive, your emotion will not be good.” 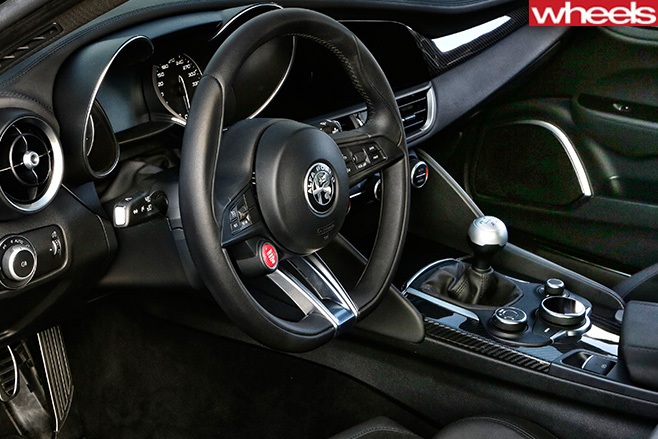 Krief also considered pushing the engine’s 7200rpm cutout closer to 8000rm, because the speed at which this engine revs and the close ratio nature of the eight-speed automatic transmission mean you’ll often run out of revs. He decided against it because “the rewards just weren’t there”, he said.

Now, back to that discussion on the Quadrifoglio’s oversteering ways. No question it loves to wag its tail, and no question that 375kW and 600Nm makes doing so a doddle. But first of all, you’ve got to be in Race mode on the QF’s DNA selector dial. Normal Giulias let the driver adjust throttle response and transmission mapping for Advanced Efficiency, Natural and Dynamic driving situations. The QF’s DNA can also influence the car’s adaptive dampers, and in Race mode, sharpen everything to the max and mostly disable ESC.

But while it’s easy to initiate a smoky drift, the Quadrifoglio’s manners right around the transition from grip to slip aren’t always exemplary. I suspect it has something to do with the torque vectoring rear diff which uses a clutch on each half axle to control torque to each wheel. Get the tail out further and it’s wonderfully easy to hold or to tuck back in as desired. 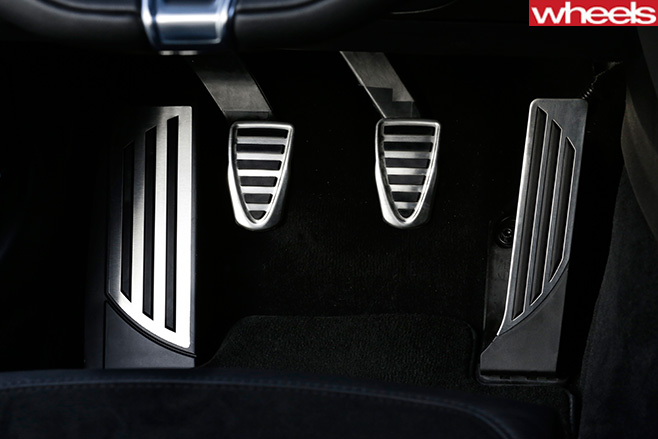 Suffice to say I’d like more time with this car to investigate further; eight laps of the Balocco proving ground wasn’t enough to really get to know this wonderful machine. Nor did they give me a single clue to how the Quadrifoglio’s sports-tuned suspension will handle real road conditions, or how close to its 7.1L/100km claimed fuel economy the Ferrari-inspired V6 will get in normal driving.

Those questions and more will have to wait for a chance to test the Alfa Romeo Giulia Quadrifoglio more extensively when it arrives in Australia in February 2017. Preferably in the High Country, and with a certain Benz, BMW, Jaguar and Lexus shadowing it. Can’t wait.